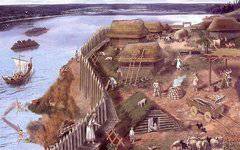 It is no secret that the information war against the Slavs and Russians, which began hundreds of years ago, is continuing now, but at each turn stories it continues in a new guise.


Russophobic passages are increasingly heard in the media, including in Russia. Let's look at a couple of illustrative examples of how the "scientists" are trying to prove that there were no ancient Slavs. One case is not serious, if not ridiculous. The other is with a claim to science, and its author is a professor of medieval history and archeology at the faculty of history at the University of Florida, USA, himself a native of Croatia.

So, the first case. The author, a Bulgarian named Plamen Paskov, released a series of video broadcasts entitled “When the Slavs were invented” and “There were no ancient Slavs”. It turns out that he discovered that in the earlier texts the name “Slovene” was used, and “Slavs” appeared later. On this basis, he writes that his fellow citizens had been deceived for decades, that the Slavs were supposed to be.

The author reports that when he addressed his discovery to historians (he is not a historian himself), they only dismissed him. Plamen Paskov calls “to ring the bells, turn on the brightest spotlights” and notify everyone that there were no ancient Slavs, they were invented. Not so translated ancient texts.

It seems that man is a victim of scholasticism to an extreme degree. We open, for example, the Tale of Bygone Years as submitted by V.N. Tatishcheva, prepared in the first half of the 18 century, and we read: “From the same seventies and two languages ​​were Slovenian language ...”, further “Noritsa naritsiemii, the same essence are Slavonic,” “they smelled Slavonic on the Danube”, “and from those Slavs many dispersed across countries, ”but“ the Inami Slavs sat near Lake Ilmen and called themselves Slovyans ”.

As we see, Tatishchev uses both options, so what? Plamen Paskov, of course, is not a Russophobe or Slavophobic, it just seemed to the layman that he made a great discovery, and he calls to ring the bells and shine with searchlights so that his discovery goes into the pantheon of modern civilization. How many words and letters have changed in words over the past thousand years? Enough to read any old text. There such discoveries - a dime a dozen. And on the video and leading the fuel to the fire pours - “you will be silent” (referring to Paskov), this is “an inconvenient story” and so on.

This, of course, funny and frivolous. Kindergarten. Moving on to Professor Florin Curta from the University of Florida, who published in the Starohrvatska prosvjeta (2015) magazine an article on 17 pages entitled “Four questions for those who still believe in prehistoric Slavs and other fairy tales.” There is already a frank Slavophobia, the culmination of which is that researchers of the early Slavs and Slavic ethnogenesis "stick their ugly head out when nationalism gains strength and begins to persecute scientists." Learn the style of outspoken enemies, if not frank enemies? And what is there for the four questions?

Here is again a typical example of scholasticism. An artificial restriction is put in advance, and everything else is automatically transferred beyond its limits. So it is proclaimed. You can arrange a lot of such games - for example, how can people live in Canada if they don't speak Canadian? How can people be called Swiss if they don't speak Swiss? What could be the ancestors of the Soviet people, if there is no Soviet language, and the Soviet people began to be such only from 1918 year?

But there will be slyness here too, because local self-government bodies (Zemstvo assemblies, Zemstvo councils) in Russia were introduced by the Zemstvo reform of the year 1864 at the level of the province and county, and by the year 1914 existed in the 43 province of European Russia. And before that there were veche and other bodies of national self-government. It is just that the restrictive term is introduced again by the scholastics, and everything that formally goes for it is denied.

But here again there are problems - the author and others like him proclaim that before the 7 of the 20th century AD Slavonic languages ​​were not. But who really knows what were the languages ​​of the early Slavs of the Lukachka culture 3200 years ago, at the end of the 2nd millennium BC?

On what basis is it proclaimed that they did not have a “Slavic identity”? You would think that criticism is for certain known. Nothing criticism is unknown, he just pretends. And if in a simple way - cheating. Gives wishful thinking.

What, does the critic really believe that when the Slavs of the Lukazi culture 3200 years ago came out with batons to fight for their land from an adversary, most likely carriers of the R1b haplogroup, which would repeat more than once in those territories, those Slavs did not have self-consciousness?

It is impossible to limit the history of the Slavs "Slavic language", which is a flexible concept, changeable over time, and besides, the most important thing is given to the linguists, with their chronic errors and misunderstandings regarding dating and classifications.

Further, the “Slavic ethnos”, which “critics” usually manipulate, is not a concept that is clearly defined. In fact, this is not. Poles and Russians are Slavs, but they have different ethnic groups, different languages, different territories, different religions.

And Florin Kurt constantly presses on the “Slavic ethnos”, which appeared only allegedly in the second half of the 1st millennium BC, and before that it was not, it means that there were no ancient Slavs. Notice fraud, juggling? It turns out that those who fought on the Tollenze River in the territory of the Early Slavonic Pudzhny culture, defending their lands, did not have not only self-awareness, but also language, traditions, and beliefs. What the hell did they say in general, using exquisite scientific language, with their clubs, as archaeological data showed? It was not necessary to fight, and they would drink Bavarian beer, following the calls of such "critics".

It is also curious that, as Professor Kurt writes, no one knows what language the early Slavs had. What linguists operate with, according to Kurt, is not real language, but some kind of artificial linguistic construct to which there is not a unit of evidence or evidence. It is neither among the Slavs, nor the Ants, and in general none of the ancient Slavs.

The linguists, apparently, have no idea that the Slavs 3200 years ago had just diverged from the Aryans two thousand years before, and their ancestors, the early Slavs and Aryans, lived only on 1300 years before on the Russian Plain, and on 1300 years , according to the principles of lexicostatics, 36% of common words is preserved in the early Slavs and Aryans. More than a third!

What, linguists and do not know about it? Apparently, they do not know, since they put the discrepancy between the Slavic languages ​​and the Aryan on 6900 years ago.

As we can see, the first question of Florin Kurt is irrelevant to the ancient history of the Slavs, is purely scholastic and reflects a low level of entry into the history of the Slavs. Attracting to this "ethnicity" does not help the cause, but only confuses the "criticism".

Ctrl Enter
Noticed oshЫbku Highlight text and press. Ctrl + Enter
We are
About Stalin and KhrushchevWhat you didn't want to know about England
Military Reviewin Yandex News
Military Reviewin Google News
128 comments
Information
Dear reader, to leave comments on the publication, you must sign in.