July 26 2016
31
Against the background of the “doping fever”, which has become another act of the “Marlezonsky ballet” about how Western partners “democratically love” all of us, the second, and even the third position, has moved a question whose importance can not be overestimated. We are talking about the ongoing blockade of the Pridnestrovian Moldavian Republic by Chisinau and Kiev. 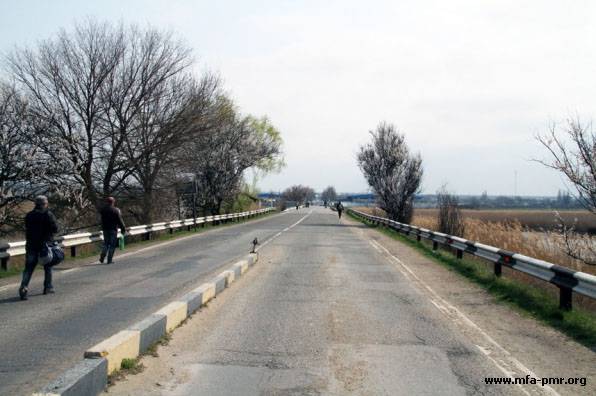 The importance of the issue for Russia, at least, is that in the territory of the Transdniestrian Moldavian Republic of about half a million people, about 200, thousands of citizens have Russian citizenship. And these citizens, like many other residents of the Pridnestrovskaia Moldavskaia Respublika, have already been subjected to real discrimination for several months now due to the position of the Moldovan and Ukrainian authorities. Discrimination is that Russian citizens have obvious problems with free movement (although Moldova and Ukraine did not de jure leave the CIS), economic restrictive barriers, including barriers to the transportation of goods, are being squeezed out of Moldavian legal field, at the same time stating that there is no Transnistrian Moldavian Republic, but there is a “united Moldova”.

Incidentally, this is taking into account the fact that both Ukraine and Moldova are eager to be in the European Union at all in any way ...

The main complaints from Kiev and Chisinau to Tiraspol have become for some time similar. This similarity is manifested in the fact that the authorities of the two states, with which the proclaimed Pridnestrovskaia Moldavskaia Respublika borders, sleep and see the withdrawal of the Russian peacekeeping contingent from the Dniester banks. The Moldovan defense minister, Anatoly Salaru, not so long ago, at the NATO summit in Warsaw, where he was invited as a “partner,” requested as much help from the North Atlantic military bloc for the withdrawal of Russian peacekeepers from Transnistria. And NATO, in countries where terrorist attacks have become almost daily routine, and which itself is at the stage of a difficult search for arguing its existence, promised Salaru to help with this question ... Help yourself first, gentlemen from the "peace-loving" military bloc, on which account for a whole series of crimes at the international level, including crimes on the violent dismantling of the statehood of several countries in Europe, Asia and Africa.

Against this background, Vitaly Ignatiev, the foreign minister of the Pridnestrovskaia Moldavskaia Respublika, is in favor of convening a negotiation process group as soon as possible. This is the so-called “5 + 2” group (Russia, Ukraine, USA, European Union, OSCE plus Moldova and Transdnistrian Moldavian Republic), which at one time was created specifically to resolve the crisis between Chisinau and Tiraspol, but which has recently been virtually eliminated from resolving the conflict situation . Moldova constantly declares its integrity, trying to get into NATO and the EU, Transnistria gives a tough answer: “To NATO and the EU without Transdniestria!” Washington is clearly not in the background of its own upheavals with the election campaign and, in particular, against Donald Trump’s statements on NATO. before the real investigation of problems in Moldova.

During the briefing Vitaly Ignatiev stated:
We have taken a whole range of measures along the diplomatic line, sent our initiatives to resolve the situation to the Moldovan and Ukrainian side and other participants in the negotiation process. We also stated the need to immediately hold a meeting of expert (working) groups on railway transport issues in order to quickly find a solution to this problem, which arose as a result of the prohibition of Moldova and Ukraine to deliver goods to the territory of the republic by Transdniestrian rolling stock. (...) I sent an official appeal to all participants of the 5 + 2 format with the initiative to hold an extraordinary meeting of the Permanent Meeting ... dedicated exclusively to the problem of railway communication in order to find an early way out of this international format from this critical situation.

Railway communication is only one aspect of the ongoing blockade. In this case, the role of him is very large. After all, in fact, the Moldovan authorities deprive Transnistria of the possibility of carrying out trade and economic activity, at the same time not being able to provide for the residents of Transnistria the transport component solely on their own.

Vitaly Ignatiev:
The problem is made acute by the fact that wagons with fuel that are being sent to the economic agents of Transnistria are being delayed and returning. These cargoes are extremely necessary for us - due to the fact that the harvest period is coming, the situation, in fact, affects the issues of food and fuel security of the state.

The Moldovan authorities act in accordance with the same templates that Kiev operates in respect of the Donbass. The only thing is that on the Dniester everything is calm from a military point of view. And this calm was established on the banks of the Dniester not without the help of the Russian peacekeeping contingent, which is like a bone in the throat of talking heads in Chisinau. From the words of the same head of the Moldovan military department, Salaru understands that as soon as the Russian peacekeeping contingent leaves the republic (there is hope that it does not), so the Moldovan “white knights”, driven by the “partners”, can move again towards Tiraspol. As a result - another war, another victim, another hotbed of tension in the post-Soviet space.

So, is there a way out when resolving conflict issues between Moldova and Transdniestria?

Such a solution offers Russia. In the course of last year’s bilateral contacts between representatives of the authorities of the Russian Federation and Moldova, the issue of the federalization of Moldova was touched upon, in which the Pridnestrovian Moldavian Republic and Gagauzia Chisinau could offer the status of subjects with their own powers, while not going beyond the general federal legislation. Such a proposal provoked a strong reaction from the Moldovan authorities. At the same time, Moldovan President Nikolai (Nicolae) Timofti announced that the Transdniestrian Moldavian Republic had already “a special status”, which is “being discussed”, but for further “discussion” Russia must withdraw its peacekeepers. Representatives of the Russian Federation tried to find out from the Moldovan authorities what is the “special status of the Transdniestrian Moldavian Republic” and how exactly does the presence of military personnel providing security in the territory of the smoldering conflict prevent Chisinau from negotiating with Tiraspol? The first part of the question Timofti left without comment, and the second part gave an enchanting answer. According to him, Moldova has a neutral status, which is why the presence of foreign military on the territory of the country is impossible, while added:

As head of state, I am guided by the provisions of the Constitution in my activities. The country's main law, adopted in 1994, states that the Republic of Moldova is a neutral state that does not enter into military alliances and alliances and does not allow the deployment of armed forces of other states on its territory.

However, in my opinion, the authors of the Constitution and those who voted for it, leaving the neutrality clause, made a mistake, since at that time part of our territory was occupied by foreign armed forces. Events in the region have proven that this approach needs to be reconsidered. In my opinion, the Basic Law should be adapted to the realities of an ever-changing world, which I spoke about in the country's parliament.
According to the logic of the Moldavian president, Moldova should remember its neutral status only at the moment when the conversation is about the presence of Russian peacekeepers. As soon as it comes to the possibility of rapprochement with NATO, Moldova should think about “correcting mistakes” in the Constitution and a possible revision of neutral status ...

This indicates that Mr. Timofti, with whom the representatives of Russia were trying to negotiate, is another talking head. The task of this head is to set forth everything that is convenient for the forces trying to reduce the once flourishing republic to the level of a regular buffer garbage dump on the backyards of NATO. And based on this fact, the question of whether the Moldovan authorities are a real subject of the negotiation process to resolve the situation with Transnistria is more like a rhetorical ... It is impossible to negotiate with talking heads by definition, they need to be put before the fact.

Ctrl Enter
Noticed oshЫbku Highlight text and press. Ctrl + Enter
We are
9 May in the center of Chisinau will host an exhibition of military equipment of NATOArmed Forces of Transnistria: 23 of the year since its foundation
Military Reviewin Yandex News
Military Reviewin Google News
31 comment
Ad