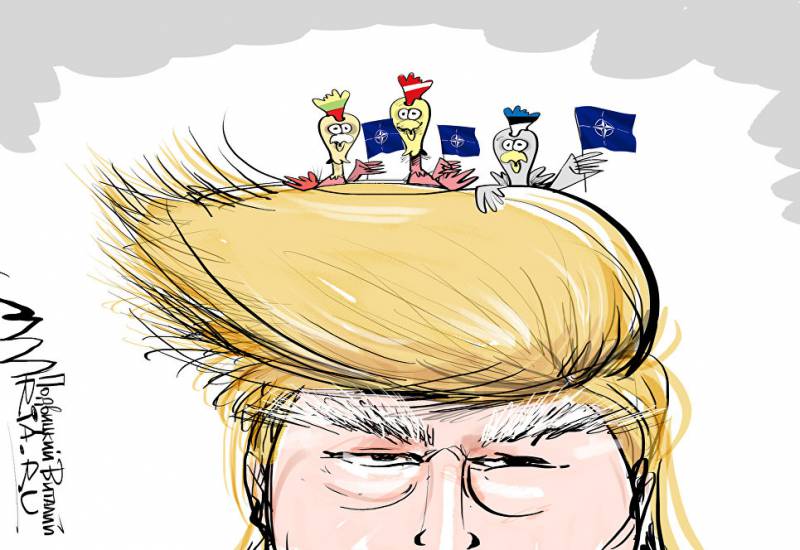 Republican presidential candidate Donald Trump raised an alarm that swept across Eastern Europe, saying that the United States will defend NATO members attacked by Russia only if these countries "fulfill their obligations to us." This is by far his toughest statement about the future of the military alliance in case he becomes the master of the White House.

On Wednesday in an interview with the New York Times, the billionaire doubted that he would automatically extend security assurances that provide 28 members of the North Atlantic Treaty Organization with the assurance that they would receive US military support in the event of an attack. In particular, his words related to the three small Baltic countries that border on Russia.

Trump's statements are “both dangerous and irresponsible,” said Ojars Kalnins, chairman of the foreign affairs committee of the Latvian Seim, in an interview with Latvian radio on Thursday. “This will adversely affect the unity of NATO or the security situation. In principle, he says that the United States will not fulfill its promises or commitments. ”

Given the candidate’s willingness to abandon his multi-year commitments to defend the allies, he is increasingly harsh on NATO after he called the outdated alliance in April during the election campaign. Trump's comments provoked a negative reaction both in the USA and abroad - less than two weeks after an agreement was reached at the NATO summit in Warsaw to intensify the deployment of troops in Poland, Lithuania, Latvia and Estonia, which is necessary as a deterrent after annexation. Russian Ukrainian Crimea in 2014 year.

Under the control of Russian President Vladimir Putin, the buildup of Russia's military power at its western borders since the collapse of communism is carried out. The Kremlin intends to spend 2020 trillion rubles (20 billion dollars) on a large-scale modernization program for the army until 314, while NATO plans to deploy four battalions on a rotational basis in this region.

“Estonia’s readiness to fulfill our obligations under NATO is beyond doubt, and others must show the same readiness,” Mariann Sudakov, press secretary of the Ministry of Foreign Affairs, wrote in an electronic statement on Thursday.

The US role in NATO "was confirmed by the decisions of the Warsaw Summit," said Polish Foreign Ministry spokesman Rafal Sobczak in an online interview.

The White House does not agree

In the United States, the reaction to Trump's interview was immediate, and amid hot electoral struggles, opinion was divided, mainly taking into account party positions. "In the issue of the US readiness to fulfill its obligations to the transatlantic alliance, no mistakes and miscalculations should be allowed," White House spokesman Josh Ernest told reporters on Thursday.

The President of the United States "must be the leader of the free world. And Donald Trump apparently doesn’t even believe in a free world, ”wrote Jake Sullivan, the Democratic Party’s candidate in the Democratic Party, Hillary Clinton, in an e-mailed statement. Trump's unwillingness to maintain "the firm guarantees given to our NATO allies," suggests that he "is not capable of character" to be commander in chief, and "it is fair to assume that Vladimir Putin would very much like Trump to become president" declared Sullivan.

Trump supporter Newt Gingrich, a former speaker of the US House of Representatives, said in an interview with CBS This Morning that NATO countries "should be worried about our readiness to fulfill our commitments." "Every president says that NATO countries are not fulfilling their part of the obligations."

Indiana Governor Mike Pence, vice-presidential candidate for the Republican Party, tried to smooth over Trump's remarks, stating that the United States would fulfill its contractual obligations. He pointed to 19 trillions of dollars of US debt as an argument in favor of the Allies to "step up" and increase their contribution to the maintenance of NATO.

“I’m pretty sure that Donald Trump will support our allies,” he said on Thursday, speaking on Fox News. “But at the same time, we intend to tell the allies around the world that the time has come, and now it’s time for them and their citizens to shoulder the financial costs of fulfilling these international obligations.”

According to a transcript of the interview published (in The New York Times), Trump stated that the United States must “properly compensate for the enormous costs” associated with providing protection to other countries, many of which are “extremely rich”. If it is not possible to agree on this, I “will be completely ready to say to these countries:“ Congratulations, you will defend yourself, ”he said.

Trump’s warning to NATO’s allies came after his election campaign headquarters, which was held this week at the Republican Party’s election campaign, rejected a proposal to the future administration to provide weapons Ukraine, at war with pro-Russian separatists. Instead, the congress made an amendment, according to which the Republicans undertake to provide only "the necessary expedient assistance."

The North Atlantic Treaty states that an armed attack on any member state in Europe or North America will be considered as an attack on them in general, which will allow the parties to take action against the aggressor. NATO calls the so-called obligations of the 5 article the “cornerstone” of the alliance, and for the first time, the allies turned to this article after the terrorist attacks on the US 11 September 2001.

“If Trump doubts NATO’s solidarity on the 5 article, his election puts security in the Baltic region at risk,” former Foreign Minister and Minister of Defense of Latvia Artis Pabriks wrote on his Twitter page. Member of the European Parliament.

Estonia "unconditionally participated in the combat operations that NATO conducted" in accordance with the 5 article in Afghanistan, President Toomas Hendrik Ilves wrote on Twitter. It is one of the five allies of NATO, which fulfills its commitment to allocate 2% of the country's GDP to defense.

We trust America "regardless of who wins the presidential election, quoted by the press service of Lithuanian President Dalia Grybauskaite her statement to journalists." She has always defended the countries attacked and will do so in the future. "

In an interview with Trump, he stated that "Putin and I get along very well," and that he would like to establish good relations between the US and Russia in order to "be friends, not fight with each other."

He also said that he was not going to “rally” Turkey, a US ally in NATO, in connection with its “purges” and the elimination of its political opponents, as well as the suppression of civil liberties after an attempted coup in this country. Trump said at the same time that the United States must first "restore order at home."

Turkey on Thursday imposed a state of emergency for three months, since the authorities are persecuting those who, in their opinion, are responsible for the failed coup attempt that killed about 250 people. Thousands of army officers, judges, and prosecutors have been detained, and a more extensive “mopping-up” operation is being carried out at universities, schools, and among civil servants. Chaos began in the financial markets.

Trump appreciated the actions of Turkish President Recep Tayyip Erdogan, giving him credit for the fact that he persevered and dealt with the failed coup. “You know, some people say that he was staged,” he said. - But I do not think so".

“When the world sees how bad America is, and at the same time we start talking more about civil liberties, I think that the preacher among us is not very good,” said Trump.

Ctrl Enter
Noticed oshЫbku Highlight text and press. Ctrl + Enter
We are
Overseas ally? Donald Trump - US Presidential CandidateSituational analysis of the death of the MH17 flight (Malaysian Boeing 777), made on the basis of engineering analysis from 15.08.2014
Military Reviewin Yandex News
Military Reviewin Google News
47 comments
Information
Dear reader, to leave comments on the publication, you must sign in.