July 26 2016
83
Our usual approach to personal security is a violation of the principle of awareness. Why?

Because people do not think about what urban civil self-defense is, what it consists of, and which areas are best suited for it. By making a rash choice, the user can subsequently pay for it - as life, as is known, does not forgive mistakes. Recommendations on the choice of directions provided in this material.

First, urban civil self-defense consists of 4 sections:
1. Preventive measures - the notorious victimology (if you look confident enough, you will not be attacked by an occasional robber)
2. Conflictology - the stage of conversation with the aggressor, at which you need to let him know that it is better not to get involved with you (you need to know how and with whom to talk)
3. The fight is the physical phase of the conflict, exactly what the majority considers to be self-defense (in fact, if you got to the battle, you made a mistake - like a scout who killed the sentry instead of passing unnoticed)
4. Work with consequences (ability to communicate with law enforcement officers) 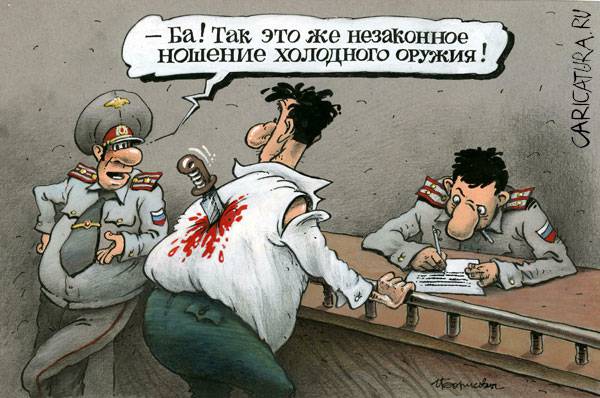 - The first section includes the work on his psyche, self-esteem, posture, gait - the robber does not like a confident man, he is looking for a victim.
- The second section is more about verbal and non-verbal effects on the aggressor - how to understand that they will suddenly try to hit you, how to speak correctly in order to bring down the mood of the aggressor, etc.
- The third section is actually the techniques themselves, strikes, throws. Here, too, one must be able to vary from sufficiently mild detention (suppression) to neutralizing aggression, and to be able to work against the group and against weapons.
- The fourth section involves communication with law enforcement officers - to give evidence, know the relevant laws and regulations. For some, this is the most important section, since we live in a society where there is such a strange concept as “exceeding the necessary self-defense” (wild from the point of view of previous centuries). And improper behavior can lead to unpleasant consequences - even more serious than beating or robbery.

Based on all this (goals, objectives and opportunities) you need to look for a direction in which you can learn all this. What is in the menu?
- Traditional martial arts
- Combat Sports
- Application Systems

It is necessary to take into account the fact that "for the street" we need such skills and abilities as:
- Work against the group
- Work against weapons (knife, stick, pistol)
- Group work (you and a friend are against the crowd)
- Work to protect (your relatives)
- Work in a closed space, with zero visibility, etc.

Now let's estimate what is best.
- In traditional martial arts there are such useful things as recreational practices and internal development. There surely is work against cold weapons. But what about the gunshot? What about working out tactical schemes? Legal issues and conflict studies? It turns out that in some aspects traditional martial arts are outdated. Of course, an experienced practitioner at the expense of accumulated calm and confidence can also resolve some conflicts without resorting to combat skills, but what about the legal consequences? And conflict studies also need to learn. Not everyone is a communication genius, and will be able to get out on the go.

- Combat sports are initially aimed at winning the competition. Based on this, the arsenal of the CE and the method of preparation are being formed. A sports coach need not know how to be able to fight against a weapon or against a group. Or how to be able to properly talk on the street. Of course, in practice, the trainer can be an experienced person who will give some valuable advice, or give his inner confidence during the communication. And very often, sports training helps to solve "street tasks", but there are also cases when fighters are cut. And there are enough of these cases to think about the need to know something else besides the existing skills. Plus an athlete in his base, with which he quickly mastered the applied skills.

- Application systems - they are very different. Ideally, the application system should be physical training (including working with weights), and sparring, and working with weapons, and against the group, as well as various tactical schemes and much more (legal training, conflict management). In practice, all this is not so simple, since it tritely takes a lot of time. And in modern man (especially family) with time "strained." Nevertheless, there are such directions, and they can be found, but this material will not contain any specific names so that it will not be classified as advertising.

Attention - you should not look for some deadly areas, where they learn to cut arteries or break the neck. Of course, in your arsenal there should be techniques for situations “either - or”, but in general, if you do not have a father prosecutor or a general, such skills can harm you more than help. Relatively speaking, instead of a blow to the throat, it is necessary to work out a palm strike in the face. That which neutralizes, but does not cripple (or kills). Better yet, the unexpected shocking blows to the body (there is an effect, there are no traces), but they must also be worked out and able to apply.

Again, the principle of awareness - you need to accurately and clearly know what you need for civilian urban self-defense. An employee of the relevant authorities or the military can and should study the systems in which all technical actions are aimed at destruction - for this they will be given not a time limit, but a medal (although, in the latest stories anything happened). And in turn, the military has no need to study conflict or preventive measures — he will not talk to the enemy. Proceed from the "fork" of their needs and capabilities - and select what can be used in this framework.