July 25 2016
26
In early July, the Senate of Poland adopted a resolution recognizing the Volyn tragedy as genocide and called on the lower house (Sejm) to establish 11 July as the National Day of Remembrance for the Victims of the Genocide committed by Ukrainian nationalists against citizens of the Republic of Poland. Last week, the Sejm responded to the call of the upper chamber of the Polish parliament and voted for the resolution “On the establishment of 11 in July, the Day of memory of Poles, victims of the genocide committed by the OUN-UPA”. 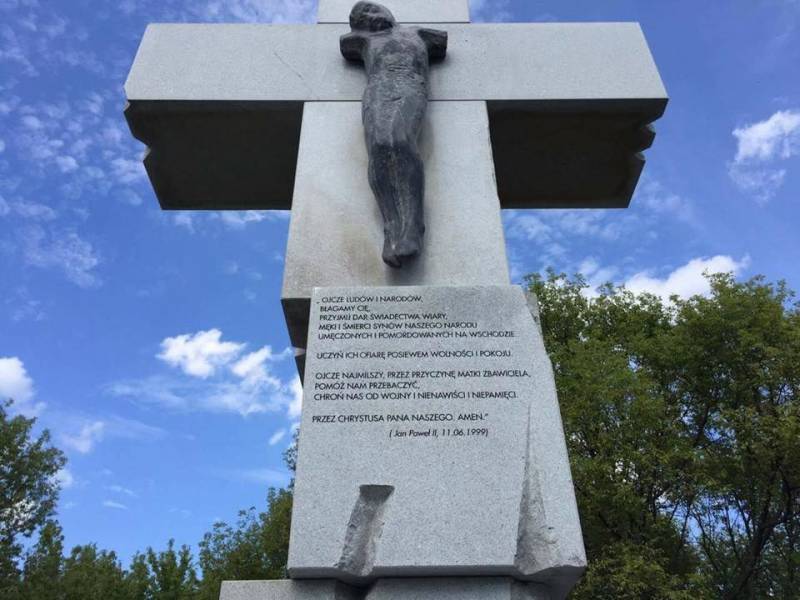 The Volyn tragedy, often called the Volyn Massacre in Poland, happened 73 a year ago. In the spring and summer of 1943, on the territory of Volyn, the Ukrainian Insurgent Army (armed detachments of the Organization of Ukrainian Nationalists - OUN) conducted a mass extermination of ethnic Polish civilians. Historians call a different number of victims of this tragedy. Polish estimates range from 30 to 80 thousand killed. However, everyone acknowledges that this was the bloodiest episode of the Ukrainian-Polish conflict in the last century.

Volyn events differed unprecedented cruelty. She was brought to the tragedy by the so-called "Rezuns". These sadists of the UPA have developed 120 methods of murder, in which knives, axes, scythes, forks, cross-saws, and other rural equipment were used. The monstrous details of those massacres still shake the mind of sane people.

After the war, the Volyn tragedy was not remembered either in Poland or in the Soviet Union. The Polish scientists, however, published several works devoted to this tragedy, but they did not receive wide publicity.

The situation changed after the collapse of the USSR. In the early nineties, Volyn was visited by a Polish delegation. She discovered more 600 mass grave sites, exhumed the remains. So confirm the facts set forth in a few earlier scientific studies and archival documents.

Later, Polish and Ukrainian historians created a joint commission to study and cover the Volyn tragedy. The commission immediately encountered a different interpretation of the events, both by the historians of the two countries and by the natives of Volyn, who witnessed those terrible days. This created an unpleasant background for the Ukrainian-Polish relations, strengthening on a common anti-Russian basis.

Politicians seemed to find a way out of this conflict. In 2003, on the occasion of the 60th anniversary of the Volyn tragedy, the presidents of Ukraine and Poland adopted the “Joint Statement“ On Reconciliation on the 60th Anniversary of the Tragic Events in Volhynia ”. The heads of state paid tribute to the victims of fratricidal conflicts, expressed condolences to the families and friends of the victims, recognized the need for a joint search historical truths and the implementation of public moral condemnation of the organizers and perpetrators of crimes against the Polish and Ukrainian peoples, recognized that a tragic fate befell both peoples. "

Mentioning in the document about the tragic fate of both peoples is not a reservation as a sign of reconciliation and tolerance, but a reflection of the real facts of the time. However, the reconciliation turned out quite sour. The Poles, excited by the terrible details of the Volyn tragedy, increasingly began to talk about the genocide in Volyn. In official documents, the term, if it did, then without proper legal consequences for the parties.

For example, in July, the 2013 of the year, the 70 anniversary of the Volyn Crime (this name is used in the parliamentary document), the Polish Sejm adopted a special resolution in which it noted that the crimes committed by the OUN and the UPA had “organized and mass scale”, which gave them a "character of ethnic cleansing with signs of genocide."

It seems that the mention in the resolution of “signs of genocide” is a largely forced measure. Back in 2005, deputies from opposition peasant parties proposed to the Seimas to adopt a resolution on the genocide in Volyn. This initiative did not receive support then, but the word “genocide” was already fixed in the Polish political consciousness. Now it is recognized and legally.

In the Verkhovna Rada of Ukraine, the decision of the Parliament of the Polish Seimas in Volyn was called a provocation of nationalist forces. “The Committee on Foreign Affairs insists that the approach of the authors of the draft resolutions of the Senate and the Sejm of the Republic of Poland to the assessment of the events of the Volyn tragedy is politically unbalanced and legally incorrect,” the TASS quoted the Rada as saying.

This text may cause an ironic smirk in many. After all, about the "Volyn Massacre" heard everything. Fewer people are familiar with the already mentioned "different interpretations of events" and "the tragic fate of both peoples." Ukrainians have their own truth.

In the last century, they suffered a lot from their western neighbors. Historians are still waiting for the study of ethnic cleansing of the twenties of the last century and other Polonization. This theme has faded in the light of the tragic events of the war years. But even military hard times are not limited to Volyn events.

Long before them, in the territory of the region, in addition to the UPA thugs, the valiant soldiers of the Polish Regional Army acted. Its so-called Volyn district consisted of about 8 000 fighters, another 15 000 people were in the Lviv district, in the rest of Western Ukraine organized walk with weapons More 20 000 Polish patriots. They fought not only with the UPA and the Germans.

In the 1942 year, when the German authorities began to evict the Poles from the territory of Western Ukraine and settle Germans and Ukrainians in their place, the Regional Army conducted a demonstration operation and destroyed in return several hundred representatives of the Ukrainian rural elite - in fact, a peaceful civilian population. Ways of killing these people also did not differ great humanism.

The districts of the Krayevoi Army also responded to the Volyn massacre. The object of their revenge was not the UPA thugs, but the simple rural Ukrainians, whom the army of Polish patriots exterminated with a number of up to 25 thousands. It is noteworthy that the ethnic cleansing organized by the Army of Krayev affected not only Ukrainian lands, but also the south-eastern territory of Poland itself. About the "valor" of these Polish patriots is still remembered also in Western Belarus and Lithuania.

Poland looked at the lands of Western Ukraine

The electoral memory of the Poles, when they talk about Katyn, but are silent about the destruction of tens of thousands of Red Army prisoners, is well known to us. Still, the case of Ukraine is special. Here behind historical memory quite definite modern self-interest can be seen. This is already felt in Kiev.

The resolution of the Polish parliament on the genocide in Volhynia was publicly condemned by Ukrainian leaders, high-ranking officials and politicians. The MP from the Batkivshchyna party, the former head of the Ukrainian Ministry of Foreign Affairs Boris Tarasyuk, allowed himself to make a concrete assessment.

In protest, he resigned as chairman of the group on interparliamentary relations with Poland and said: "For speculations on the feelings of Poles, whose relatives died in the so-called" Eastern armchairs of Poland ", which today is Ukrainian territory, there are hidden territorial claims of politicians, distortion Ukrainian history and the humiliation of thousands of Ukrainians who died during this massacre. "

Diplomat Tarasiuk was the first of Ukrainian politicians to charge Poland with its claim to “Eastern Cresses,” as the Poles of Western Ukraine call it. Many in Poland consider them their own. In Warsaw, there is even an organization called “Restitution of the Cresses”, which is fighting “for the return of Polish property located in Western Ukraine or the receipt of compensation for the property left by the Poles”.

According to the functionaries of the Restitution of the Cres, the organization has already prepared documents for approximately 100 000 lawsuits to the courts of Kiev and Lutsk from the heirs of the former owners of real estate in Galicia and Volyn. This work was intensified after Ukraine signed the EU Association Agreement. In “Cresses” they considered it to be the basis for their claims. Now, the Polish Sejm, which recognized the genocide in Volyn, gave a formal legal reason to the Polish heirs of property owners in Ukraine.

Experts recognize that the claims of the Polish authorities today have gone beyond the return of real estate, and even entire farms. In Warsaw, we felt: Ukraine will disintegrate, the process that has begun is unlikely to be stopped. So the Poles are in a hurry to “lay down the necessary legal framework in order to legitimately claim their former lands."

Among other things, the concrete applied functions of the resolution adopted by the Sejm are visible. The recognition of the Volyn tragedy as genocide will allow Warsaw to present financial claims to Kiev. The lawsuits of the Restitution of the Cresses will not be limited. World practice shows that the amount of payments in such cases exceeds the limit for billions of dollars. With this, Ukraine's economy today just can not cope.

In vain, President of Ukraine Petro Poroshenko now appeals for forgiveness for the "Volyn Massacre." On Friday, he wrote down on his Facebook page: “We must return to the commandment of John Paul II — we forgive and ask for forgiveness.” Polish politicians did not respond to the call of the Ukrainian president.

It seems that they have already decided for themselves: the former idyll of the Polish-Ukrainian relations is over. As they say, nothing personal - only geopolitics. Its common anti-Russian goals no longer hold it together ...