New rate on the agricultural locomotive of the Russian economy

July 25 2016
164
Recently, Russian President Vladimir Putin signed a decree on the need to develop and approve a federal science and technology program for the development of agriculture for the next decade. Several ministries and departments will be involved in the development, including the Ministry of Agriculture, the Ministry of Education and Science, the Ministry of Industry and Trade, the Ministry of Communications and Mass Communications, the Federal Agency for Scientific Organizations. In addition, active participation in the creation of a program of agroindustrial, as well as scientific institutions dealing with problems of agriculture is expected. In particular, the potential of the RAS (Russian Academy of Sciences) will be involved.
The program involves the creation of so-called interdisciplinary research centers in the field of agriculture. Within such centers, the main ideas of the development of the agricultural sector in the country will be accumulated with the aim of increasing its share in the system of forming the state budget.


According to Russian President Vladimir Putin, it is necessary to attend to the creation and implementation of competitive technologies that would be based on the latest scientific achievements. This is a whole list of software and technical components that need to be implemented before 2026. 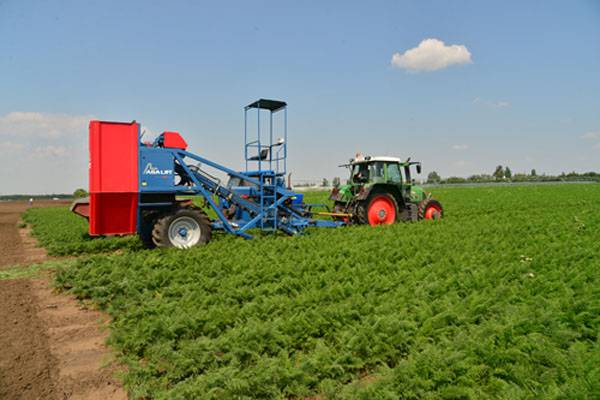 In particular, this is the development of its own seed fund, which, after the collapse of the USSR, was actually reduced to nothing, and the lion’s share of seed banks today is purchases from foreign "partners". In addition, it implies the creation of a domestic breeding material for the animal breeding complex, which also degraded after the announcement in 1991 that "we have achieved freedom".
Research centers are tasked to create high-quality feed, feed elements and additives, to create a system for checking genetic material for its high quality. Profile ministries should organize work on the creation of objects for processing and storage of agricultural products with the aim that it did not happen that a record crop was harvested, but a considerable part of it simply rots under the open sky.

The need to study the organization of markets for agricultural products, as well as food obtained from the processing of agricultural production, is noted. The program has a point on ensuring the safety of the development of the livestock complex. In particular, it points to the need to take measures to create veterinary drugs of their own nature, which allow to prevent the spread of such diseases among animals, which in some cases simply mow the livestock in a number of Russian regions.

As one of the forms allowing a substantive analysis of the state of affairs in the Russian agro-industrial complex, the All-Russian Agricultural Census is determined, which will end on August 15 in most parts of Russia, and in a number of remote subjects it will be held from September to November 15. Conducting this kind of census will determine the number of large agro-industrial holdings, peasant farms, individual entrepreneurs engaged in the field of agriculture, the volume of the park of agricultural equipment and the percentage distribution of Russian-made equipment in it. This will make it possible to determine the volumes and rates of state subsidies in the context of the ongoing sanctions and counter-sanctions epic, and also taking into account the fact that Russia is “like” in the WTO (World Trade Organization).

The previous agricultural census, which took place exactly 10 years ago in our country, allowed us to prepare the basis for the adoption and implementation of the priority national project “Development of the AIC” and the state program for the development of agriculture and regulation of agricultural products, raw materials and food markets. The complex of measures operated during the entire previous crisis period in the Russian and world economy: from 2008 to 2012. The success of the program is hardly to dispute.

So, thanks to the program's operation, the acreage in Russia from 2008 to 2010 increased by almost 4 million hectares (from 75 to 79 million hectares, respectively). The unfavorable climatic conditions in 2010 made a negative contribution to this process, however, the groundwork was made, and after the decrease in acreage in 2010, since 2011, their growth is again observed. In a number of regions, yield records were broken. And we are talking not only about the south of Russia, but also the regions of Siberia. In the Stavropol and Krasnodar Territories, the Voronezh Region, the Republic of Adygea, in the Altai, the yield by 25-50% exceeded the world average. Thus, wheat yields in Canada in 2012 were about 29 t per hectare, and yields in Krasnodar Krai in the same year (according to Rosstat) reached 47 t / ha. In fairness it should be noted that the average percentage of yields in Russia in 2008-2012 was inferior to Canadian and American, but the percentage of lag was decreasing from year to year. Similar trends continue today.

There is an increase in yields and harvests in a number of other crops: barley yields rose by 5% compared to the same period last year, potatoes - by 16,4%, and winter rape - by 27,5%.

On 18 of July of the current year, greenhouse vegetables in the country were collected by 21,5% more than in the same period of 2015 of the year, which made it possible to increase the percentage of domestic products on the Russian market by about the same figures.

The production of domestic poultry for slaughter increased by about 5% in live weight.

The most important work is underway to improve the domestic system of agricultural insurance, which allows farmers to receive compensation for losses in the event of, for example, adverse weather conditions affecting the crop.

Experts expect growth in the agricultural industry in the current year. While maintaining the current pace, we can hope for growth rates in 4,5-5%.

If the federal science and technology program for the development of agriculture also works in the same vein, then we can expect truly radical changes in the AIC system. Plans, as they say, hulk. And the realization of this “hulk” will enable Russia to realize the most powerful agricultural potential, which few can afford to compete with on the world market even with the remaining sanctioning tendencies. When taking into account recent achievements in agriculture (the point of growth for which was given not only by counter sanctions, but also by the work of a number of state programs), there is reason for optimism. The main thing is to do without the influence of the “genius” of eKhvektivnyh managers, who consider any kind of security (including food) from the point of view of the likelihood of exclusively personal enrichment ...
Video "Agrarian survey" of the press center of the All-Russian Agricultural Census: