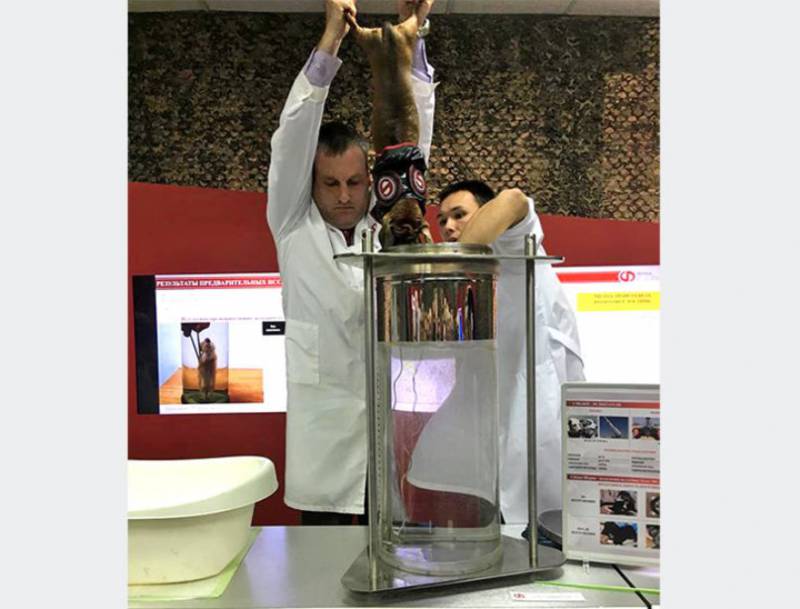 “In one of his laboratories, work is underway on liquid breathing. While experiments carried out on dogs. In our presence, the red dachshund was plunged down into a large flask with water. It would seem, why mock the animals, now choke the same. But no. She sat under water for 15 minutes. And the record is 30 minutes. Incredible. It turns out that the dogs' lungs were filled with oxygenated liquid, which gave her the opportunity to breathe under water. When she was pulled out, she was a little sluggish - they say, because of hypothermia (and I think someone will like to hang under the water in the bank before everyone’s eyes), but after a few minutes she became quite herself. Soon, experiments will be carried out in public, ”said Igor Chernyak, a RG correspondent.

“It was all like the fantastic plot of the famous film“ Abyss ”, where a man could descend to a great depth in a spacesuit, whose helmet was filled with liquid. She submariner and breathed. Now this is no longer a fantasy, ”he writes.

According to the correspondent, “liquid breathing technology involves filling the lungs with a special liquid, saturated with oxygen, which penetrates the blood.”

“The Advanced Research Foundation approved the implementation of a unique project, the work is led by the Institute of Occupational Medicine It is planned to create a special spacesuit that will be useful not only for submariners, but also for pilots, as well as astronauts, ”he said.

Davydov told a reporter that a special capsule was created for dogs, which is immersed in a hydraulic chamber with increased pressure. “At the moment, dogs can breathe at a depth of up to 500 meters without health consequences for more than half an hour. "All test dogs survived and feel well after a long, fluid breath," said the head of the Foundation.

Further, the newspaper writes: “Few people know that experiments on liquid breathing in humans have already been conducted in our country. Gave amazing results. Aquanaut breathed fluid at a depth of half a kilometer and more. That's just the people about their heroes never found out.

In 1980 in the USSR, they developed and began to implement a serious program to save people at depth.

Special rescue submarines were designed and even commissioned. We studied the possibility of human adaptation to depths of hundreds of meters. Moreover, the aquanauts should not be in such a heavy diving suit, but in a lightly warmed diving suit with scuba diving behind their back, being in such a depth, his movements were not constrained by anything.

Since the human body consists almost entirely of water, it is not dangerous for it to have terrible pressure at the depth itself. The body should be simply prepared for it, increasing the pressure in the pressure chamber to the desired value. The main problem is different. How to breathe at a pressure of tens of atmospheres? Clean air for the body becomes poison. It must be diluted in specially prepared gas mixtures, usually nitrogen-helium-oxygen.

Their formulation - the proportions of different gases - is the biggest secret in all countries where similar studies are underway. But at a very great depth and helium mixtures do not save. Lungs, so that they do not break, must be filled with liquid. What is a liquid, which, once in the lungs, does not lead to suffocation, but transfers oxygen through the alveoli into the body - the secret of secrets.

That is why all work with aquanauts in the USSR, and then in Russia, was conducted under the heading "top secret".

Nevertheless, there is quite reliable information about the fact that at the end of 1980-s there was a deep-sea aquastance on the Black Sea, in which test-diving submariners lived and worked. They went out to sea, dressed only in wetsuits, with scuba diving behind their backs, and worked at depths from 300 to 500 meters. A special gas mixture was fed into their lungs under pressure.

It was assumed that if the submarine is in distress and lies on the bottom, then a rescue submarine will be sent to it. Aquanaut prepared in advance for work at the appropriate depth.

The hardest thing is to be able to withstand the filling of the lungs with liquid and simply not die of fear.

And when the rescue submarine approaches the disaster site, divers in light gear will go out into the ocean, inspect the emergency boat and help evacuate the crew with the help of special deep-water vehicles.

Until the end of those works could not be brought due to the collapse of the USSR. However, those who worked at depth, still managed to award the stars of the Heroes of the Soviet Union. "