In Turkey, the rebels could seize the American nuclear arsenal 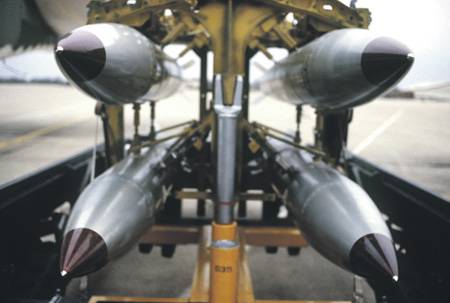 B-61 nuclear bombs are designed to contain Russia.


A wave of panic publications swept through the American media in connection with information received from Turkey about temporary measures by the Turkish authorities, which during the recent rebellion blocked the Incirlik airbase, turned off the power and closed the airspace for the military aviation USA. The primary concern was the fact that the American tactical nuclear stockpile was stockpiled on this basis. weapon (TNW).

According to the Director of the Nuclear Information Project at the Federation of American Scientists, Hans M. Christensen, B-50 is located in underground storage facilities at the Incirlik airbase (over other data - 70 bombs). It is known that this class of weapons, located in Turkey, is 61% of the entire arsenal of tactical nuclear weapons (TNW), which Washington holds in Europe under the auspices of NATO. The same repositories are located in Germany, the Netherlands, Belgium and Italy. According to the New Yorker magazine, up to 25 units of TNW are placed in the Old World, according to other data, their number exceeds 200 units. This weapon is aimed at deterring Russia, but the American media did not focus on this fact. Their concern is not connected with the fact that the Incirlik airbase is located near the Syrian border, that is, in the immediate vicinity of the combat zone. The American publications drew attention to the actions of the Turkish authorities related to the blocking of the military airbase, as a result of which, although a hypothetical, but still a threat to the safety of the US nuclear warheads arose.

Attempts to agree on the reduction of TNW on the European continent between Washington and Moscow were made in Soviet times. One of them - known as the “presidential initiative” - was almost a success in 1991 – 1992, but it was not subject to inspection and did not continue. According to the head of the group of advisers to the Director of the Russian Institute for Strategic Studies, Vladimir Kozin, earlier the inability to agree on a reduction of this class of weapons in Europe was due to the fact that “as a prerequisite for starting negotiations on reducing tactical nuclear weapons, the United States repeatedly asked tactical nuclear weapons from the European continent. "

After the events of the winter of 2014, the situation has changed a lot. Now Washington and Brussels do not exclude forceful containment of Moscow. The armed forces of the NATO countries in the aggregate far exceed the Armed forces of Russia, which, in turn, views its own TNW as a means of deterring possible alliance aggression. Russia does not deny that, with a threat to its existence, it may be the first to use the nuclear potential. According to many military experts, for Moscow this weapon has become political. For the United States, TNW always deployed in Europe has been largely classified as a strategic weapon, in view of the fact that it can be delivered to virtually any part of the European territory of Russia. Whereas for the Russian TNW the territory of the United States is inaccessible.