July 23 2016
50
Around the two-handed swords of the Middle Ages, thanks to the efforts of mass culture, the most incredible rumors always hover. Some give weapon pounds weight, others - incredible dimensions, and others even say that swords of this size could not exist as a military weapon. Popular Mechanics decided to dot the i's and tell you about the most popular types of two-handed swords. 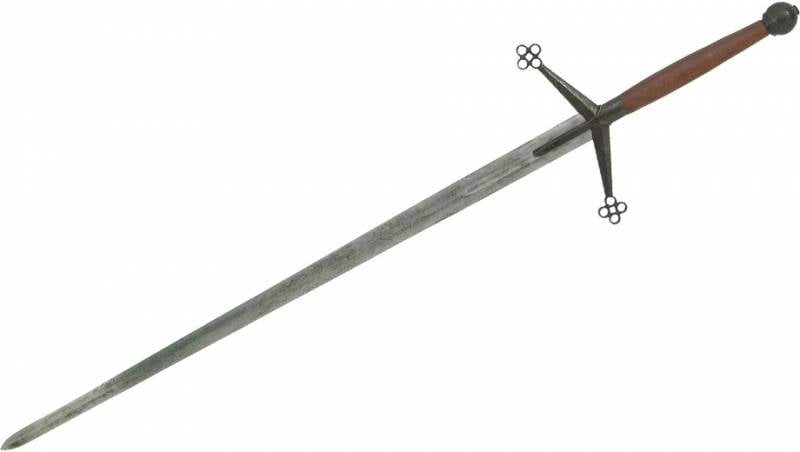 Claymore (claymore, Claymore, Claymore, from the Gallic claidheamh-mòr - “the big sword”) is a two-handed sword that has become very popular among the Scottish Highlanders since the end of the 14th century. Being the main weapon of the infantry, claymore was actively used in clashes between tribes or border battles with the British.

Claymore - the smallest among all his fellows. This, however, does not mean that the weapon is small: the average blade length is 105 − 110 cm, and with the handle the sword reached 150 cm. Its distinctive feature was a characteristic bend of the crosshairs - down towards the tip of the blade. This design made it possible to effectively capture and literally pull out from the hands of the enemy any long weapon. In addition, the decoration of the horns of the bow - breaking through in the form of a stylized four-leaf clover - became a distinctive sign by which everyone could easily recognize the weapon.
In terms of size and efficiency, claymore was perhaps the best option among all the two-handed swords. He was not specialized, and therefore quite effectively used in any combat situation. 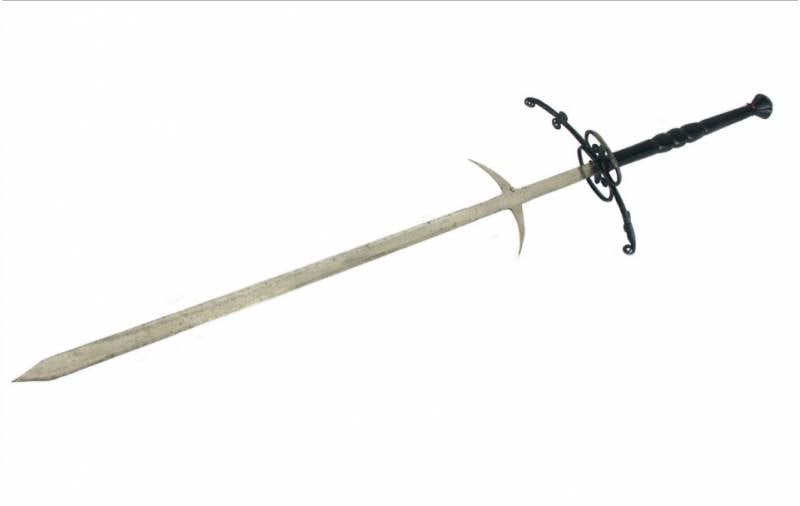 Zweihander (German Zweihänder or Bidenhänder / Bihänder, “the two-handed sword”) is a weapon of a special division of landsknechts who consist of double salaries (doppelsoldnerov). If the claymore is the most modest sword, then the Zweihander was indeed impressive in size and in rare cases reached two meters in length, including the handle. In addition, he was notable for a double guard, where special “boar tusks” separated the uncut part of the blade (ricasso) from the sharpened blade.

Such a sword was a weapon of very narrow application. The technique of warfare was quite dangerous: the owner of the Zweihander acted in the first rows, pushing aside with a lever (or even completely cutting) the shaft of enemy peaks and spears. To possess this monster required not only remarkable strength and courage, but also considerable skill of the fencer, so mercenaries received double salary not for their beautiful eyes. The technique of fighting with two-handed swords is not very similar to the usual blade fencing: such a sword is much easier to compare with the beard. Of course, Zweihander did not have a scabbard - he was carried on his shoulder like a paddle or spear.

Flamberg ("flaming sword") - is a natural evolution of the usual straight sword. The curvature of the blade made it possible to increase the striking ability of the weapon, but in the case of large swords, the blade was too massive, fragile and still could not penetrate the quality armor. In addition, the Western European school of fencing involves the use of the sword mainly as a piercing weapon, and therefore, the curved blades for it were not suitable.

By the XIV-XVI centuries, the achievement of metallurgy led to the fact that the cutting sword became completely useless on the battlefield - it simply could not penetrate the hardened steel armor with one or two strikes, which played a critical role in mass battles. Gunsmiths began to actively seek a way out of this situation, until they finally came to the concept of a wave blade, which has a number of successive antiphase bends. Such swords were difficult to manufacture and were expensive, but the effectiveness of the sword was indisputable. Due to a significant reduction in the area of ​​the striking surface, upon contact with the target, the destructive effect increased many times. In addition, the blade acted on the saw principle, cutting through the affected surface.

Flamberg wounds did not heal for a very long time. Some commanders sentenced prisoners of swordsmen to death solely for carrying such weapons. The Catholic Church also cursed such swords and branded them as inhumane weapons.

Espadon (fr. Espadon from the Spanish. Espada - the sword) is a classic type of two-handed sword with a tetrahedral cross-section of the blade. Its length reached the 1,8 meter, and the guard consisted of two massive arches. The center of gravity of the weapon was often shifted to the tip — this increased the penetrating ability of the sword.

In battle, such weapons were used by unique warriors, who usually did not have any other specialization. Their task was, waving huge blades, to destroy the enemy’s combat system, to overturn the first rows of the enemy and to pave the way for the rest of the army. Sometimes these swords were used in battle with the cavalry — because of the size and weight of the blade, the weapon made it very effective to chop the legs of horses and cut through the armor of heavy infantry.

Most often, the weight of military weapons ranged from 3 to 5 kg, while heavier specimens were award or ceremonial. Sometimes weighted replicas of combat blades were used for training purposes. 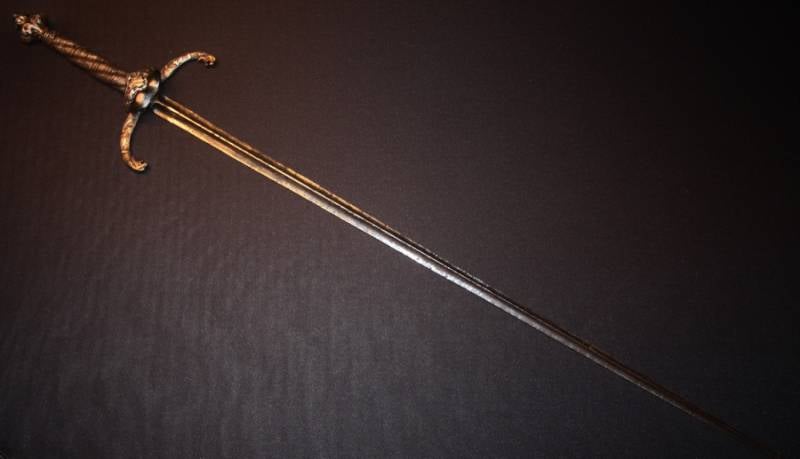 Estoc (fr. Estoc) is a two-handed piercing weapon designed for penetrating knight’s armor. The long (up to 1,3 meter) tetrahedral blade usually had a stiffener. If the previous swords were used as a means of countermeasures against cavalry, then the estka, on the contrary, was the rider's weapon. The riders wore it on the right side of the saddle so that in case of loss the peaks have an additional means of self-defense. In equestrian combat, the sword was held with one hand, and the blow was struck due to the speed and weight of the horse. In a foot skirmish, the warrior took him in two hands, compensating for the lack of mass with his own power. Some samples of the XVI century have a complex guard, like a sword, but most often there was no need for it.