Flying ship SM-1: the history of the first Soviet ekranoplan 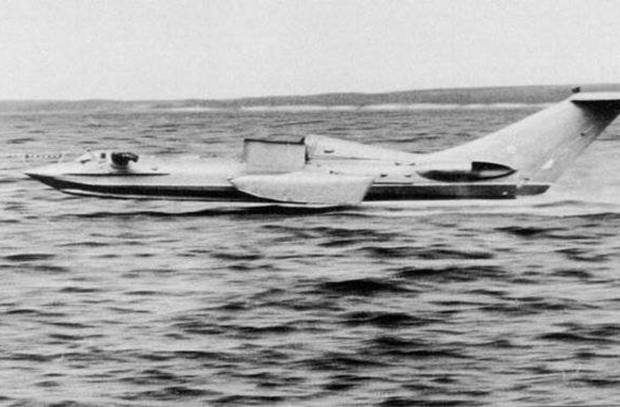 22 July 1961, the designer Rostislav Alekseev went to fly on his first child, flying due to the screen effect

Since mankind began to create and improve vehicles, one of the main objectives of this process has become the increasing speed of movement. But, alas, only airplanes were able to make real speeds - with the ships, such a focus almost does not work. Almost - because in post-war Russia they were able to create ships that had developed the speed of 400 – 500 km / h! We are talking about ekranoplans - a kind of hybrids of an airplane and a gliding ship, which have been developed for a long time by the talented designer Rostislav Alekseev. His first car of this kind - the SM-1 ekranoplan, that is, the “Self-propelled model, the first one” - set off on its first flight 22 July 1961 of the year. And the creator himself controlled the unit, completely confident in the safety and capabilities of its offspring.

For the first time, the effect of an aerodynamic screen, or a screen effect, that is, a sharp increase in wing lift and other aerodynamic characteristics of an aircraft when flying near a screening surface (water, earth, etc.), became known at the beginning of 1920's. The first to encounter such a phenomenon were pilots, especially those who flew aircraft with rather wide and short wings. They noticed that when taking off or landing, a plane flying at low speed suddenly starts to behave strangely - as if a huge pillow appeared under it. At first, meetings with the screen effect even led to disasters, while aerodynamic scientists failed to investigate and explain the phenomenon and suggest ways to deal with it.

Yes, the planes had to deal with the screen effect, but who said that it was completely useless? Practically at the same time when the aerodynamic screen was described, there were also scientists who tried, at least theoretically, to apply a new phenomenon. And among the first among them were Soviet engineers. Thus, in 1922, an article by aerodynamic scientist Boris Yuriev (in the future, a full member of the USSR Academy of Sciences and a lieutenant general of engineering and technical services), "The influence of the earth on the aerodynamic properties of a wing," was published. It was she who gave a theoretical justification for the use of the screen effect to create aircraft of special design. A decade later, the first attempt at practical application of this theory was made by the famous Soviet inventor Pavel Grokhovsky. “I got the idea to use an“ air cushion ”, that is, compressed air formed under the wings from the flight speed, the well-known designer wrote at the beginning of 1930’s. - Amphibious ship can fly-glide not only above the ground, above the sea and the river. The amphibious ship allows to transport cargo and people all year round at speeds of 200 – 300 km / h, in summer on floats, in winter on skis. ”

But the level of development of the pre-war technology and the need for new types of transport were low, and therefore, at that time, WIG did not receive development - it was limited to several large-scale models and experimental machines. The prototypes created by Pavel Grokhovsky and Finn Toomas Kaario, proved the very possibility of movement due to the screen effect, but did not even pull into pre-production copies. And because the flowering ekranoplanostroeniya began only two decades after the end of the Second World War. By this time, new heat-resistant and moisture-resistant materials for planes and plating of such devices appeared, and jet and turboprop engines capable of accelerating them to speeds at which the aerodynamic screen became truly effective.

In the Soviet Union, two design bureaus were engaged in work on ekranoplans, but only one managed to bring their designs to mass production. Taganrog OKB, in which the aircraft designer Robert Bartini worked - one of the most extravagant and unrelated conventions of the creators of Soviet aircraft, embodied only one model of its leader in the metal: BBA-14, that is, a vertically taking off amphibian. Since the vertical take-off engines could not be further developed and installed on this amazing aircraft, two cruise engines were installed in their place to create a screen effect - and thus they turned the aircraft into a vertical take-off and landing into an WIG. But the scale of the finishing work was so great that after the death of the designer, the work on BBA-14М1П (such an index received an ekranoplane) was discontinued.

The creators of ekranoplans from Gorky Central Design Bureau for hydrofoil vessels (CDB SEC) under the leadership of Rostislav Alekseev achieved much greater success. In this design bureau in the post-war years, sea and river hydrofoil vessels were created, many of which are unmatched to this day. The famous "Rockets" and "Meteors", "Comets" and "Burevestniki" - all this is the development of the CDB SEC. And it was they who ultimately led to the appearance of the first EKN design of Rostislav Alekseev.

The point was that, while improving hydrofoil vessels, the designer quickly realized that no matter how fast they were, reaching speeds inaccessible to ordinary ships, they still could not move faster than 100 – 120 km / h. The culprit is cavitation effect, boiling water in a rarefied zone, which increases with increasing speed and dramatically reduces the effectiveness of the hydrofoil. It was then that Alekseev came up with the idea to eliminate the main source of problems - the contact of the vessel with water. For the shipbuilder, such an idea looks at least revolutionary, if not to say a little insidious. But Rostislav Alekseev was not embarrassed: having studied all the available materials on the screen effect and the pre-war attempts to create an ekranoplan, he set about designing his own machines of this type.

Short this way only looks, but in fact the designer took almost ten years before he managed to start building his first ekranoplan. As always, the process spurred the interest of the military, who appreciated the unprecedented speed capabilities and theoretical loading capacity of such vessels. But in order to confirm the theoretical position and prove the right of ekranoplans to exist, an impressive demonstration was required. It was for her and was built by an SM-1 ekranoplan, which set off on its first flight 22 July 1961. After making sure that the theory is correct, and the built machine confidently moves over the water surface, listens to the steering wheel and behaves adequately, Alekseev began to demonstrate it to potential customers. The most important were the flights, which were monitored by the secretary of the Central Committee of the CPSU, the future Minister of Defense Dmitry Ustinov and the commander-in-chief of the Navy Sergey Gorshkov. They were so impressed by what they had seen that they asked the designer for the right to fly independently on the CM-1 - and received from it, as eyewitnesses recalled, inexpressible pleasure! Unhappy with the flight was only the chairman of the State Committee for Civil Engineering, Boris Butome, who was in an unpleasant situation with suddenly ending fuel in the middle of the flight. Forced to wait until the ekranoplan was refueled, the engines were started and led to the shore, the head of the shipbuilding industry, as they say, delivered its irritated verdict: they say, “it doesn’t fly above the telegraph pole”.

However, this was no longer important: Dmitry Ustinov, who had tremendous political weight and disposed naval orders Sergey Gorshkov appreciated the capabilities of a new type of machine. And since 1962, after the second SM-2 ekranoplan, which received classic nasal blowing engines that helped to blow air under the wing, showed the head of the USSR Nikita Khrushchev and received his approval, the development of serial models in the interests of the army and navy began. TsKB SPK immediately worked on three projects: airborne assault, strike and anti-submarine ekranoplanes. At the same time, the design bureau worked on various options for assembling new type of vessels, sequentially creating several more “self-propelled models” - from SM-3 to SM-8.

As is usually the case with equipment created on the basis of a new principle of movement, the development of ekranoplanes took a very long time, during which the interest of the military and the financial capabilities of the country gradually came to naught. As a result, only one model of an ekranoplane went into the series - the landing party, which received the MDE index (small landing craft-ekranoplan) and the A-90 code "Eaglet". True, only five of them were built, of which only three were adopted by the Soviet Navy and became part of the 11th separate air group of the General Staff of the Marine aviation. These ekranoplanes could carry 200 marines or two units of armored vehicles (for example, floating Tanks PT-76 or armored personnel carriers BTR-60) at a distance of up to 1500 km at a speed of up to 350 km / h!

Among other famous developments of Rostislav Alekseev are the colossal (almost 95 meters in length!) Ten-engine winged KM-1, whose name Western intelligence has decoded as “The Caspian Monster”. Although in reality the abbreviation meant only “ship-mock-up”: it was an experienced ship, on the basis of which it was planned to build a serial combat wig for the Navy, capable of performing the functions of a strike ship. A little less of it was the Lun, an ekranoplan-rocket carrier, built in a single copy, which received the unofficial title of “carrier-killer”. Armed with six Mosquito anti-ship missiles, he was able to release them on the go - at speeds up to 500 km / h. At the same time, Lun, moving at a height of several meters above the sea, was practically elusive for enemy locators and posed a serious threat to the aircraft carrier groups, for which it was created to combat. But only one such ship entered the 1990 year, and that immediately after the collapse of the Soviet Union suddenly turned out to be useless to anyone and is living its last century at the once top-secret base in Kaspiysk.