Hack if you can! Border Security Technologies (Part of 1) 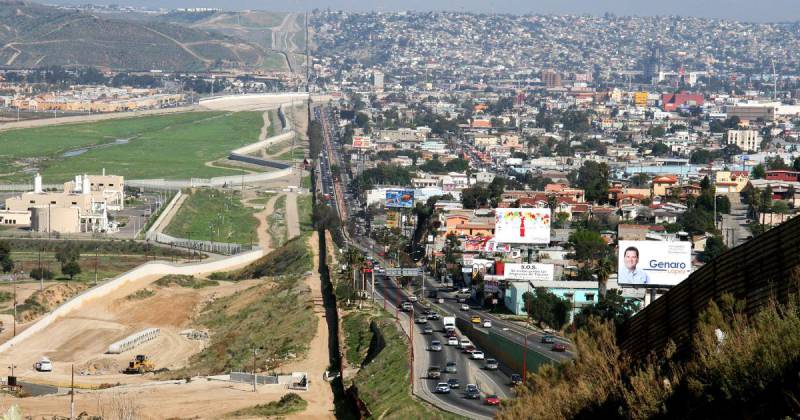 "We will be neighbors." Mexican border town of Tijuana (right) in the state of Baha California nestled near the American city of San Diego

Peacetime border control has never been as sensitive as it is now to Europe and the United States. In Europe, sympathy for people fleeing the civil war in Syria and the collapse of states in Africa is mixed with the fear of political violence and social upheaval, exacerbated by the already existing pressure of economic difficulties.

The technology cannot yet solve the problems that make refugees look for a better life, but it can help redirect them to official transition points by plugging “leaky” sites and helping to identify those who can be a real threat. "Optoelectronics (electronics direction, covering the use of optical and electrical methods of processing, storage and transmission of information) is a key component of integrated multi-touch systems, providing automatic detection, identification and classification of targets and minimizing false alarms, which significantly reduces the burden on security personnel" - said Controp Vice President Johnny Carney. He also pointed to the well-established difference in the market between low and high technical levels regarding sensor characteristics and their overall effectiveness. “The market is full of optocoupler companies, however, not all have the same level of technology. In fact, only a few companies offer really high-tech products, he said. “The competition is fierce, and some users stop at less advanced technologies for various reasons, instead of choosing the most advanced systems that really help solve the problem.”

Nave Bahat, head of optoelectronics research at Tamam’s Israel Aerospace Industries (IAI) division, agreed, adding that some people buy large quantities of “very, very cheap cameras”, for example, on the Internet on Ebay or Amazon, and do not care about breaking some of them. But there are “real boundaries” that monitor high-quality cameras, some with a range of just half a kilometer, and others with a significantly longer range, all of which are connected to image analysis, target recognition and tracking systems, databases and related software. In high-end systems, devices operating in different spectral ranges are used. These are cameras in the visible, long-wave, medium-wave and short-wave infrared (IR) regions of the spectrum, uncooled for short distances and cooled for large distances, providing the ability to merge images when images from different sources or generated by different systems are combined to obtain as detailed as possible. picture. Bahat stressed that the fusion helps to extract the best information from each wavelength, increase tracking and visualization capabilities at long ranges or in bad weather. 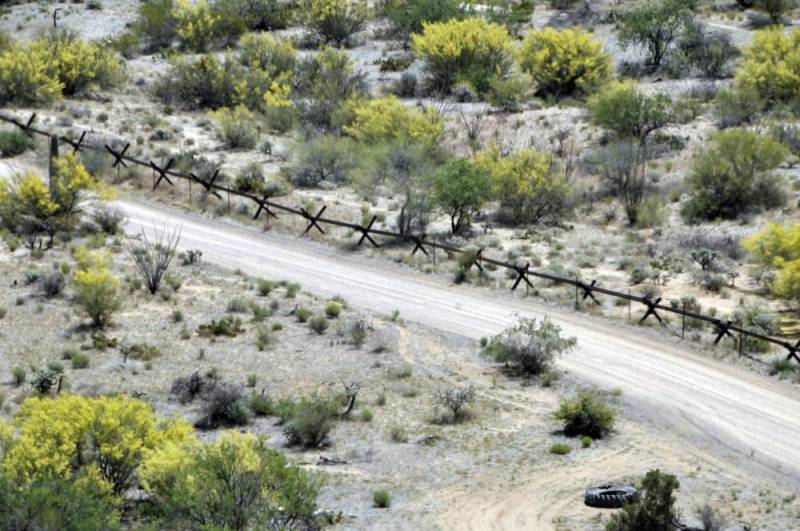 This hedge stands on most of Arizona’s border with Mexico, demonstrating why intelligent network sensor systems with automatic detection and target recognition are of such great interest. 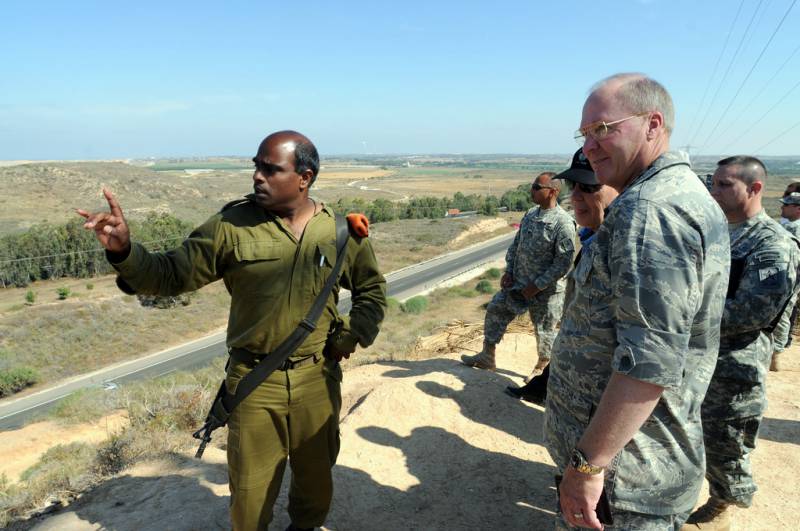 An Israeli officer talks to the head of the US National Guard Bureau at an observation post near the Israeli city of Sderot on the border with the Gaza Strip.

Bahat also noted the importance of stabilization for long-range cameras, adding that this should be one of the first decisions in determining the parameters of the border security system. Erik Olsen, vice president of marketing for the American company PureTech Systems, spoke about the growing need for ultra-long-range detection systems designed to monitor the frontier and the coastline. "Part of this growth seems to be related to the understanding that long-distance observation is now available at a reasonable cost." He also pointed to the growing interest in the use of airborne and ground mobile platforms, including vehicles, unmanned aerial vehicles (UAVs) and aerostats, as a supplement to stationary border guard systems. The company is most active in the border security markets in the Middle East and North America; in October 2015, she announced the completion of the initial deployment phase of the Remote Video Surveillance System RVSS upgrade for the US Customs and Border Protection Office. PureTech delivers software for full-format video, object detection, sensor monitoring, and a geospatial user interface as a member of the General Dynamics group that won the RVSS upgrade contract. The RVSS system consists of towers with the appropriate equipment installed near the Mexican border, which allow to improve the process of monitoring the border strip.

Ari Chernobrov, director of security systems at Elbit Systems, stressed that most of the requirements for which his company fights with competitors include the integration of many technologies, including automatic radar detection systems, maintenance-free ground sensors, information analysis and verification systems from video motion detectors based on various imaging devices. Most customers want to have object detection distances of at least 10 km. “Increasing detection ranges create several serious problems that are unique to surveillance systems,” said Olsen, recalling image instability, environmental disturbances and a small array of pixels that do not contribute to the visualization of the object. "These problems are solved by computing power, software stabilization, more advanced background modeling and intelligent extraction of special features for more accurate identification of the object of interest."

Another problem is the fight against image fade, that is, with the displacement of the central pixel of the camera from the object when the lens approaches several kilometers. “A camera with a large lead can hold an object in the center at zero magnification, but it completely loses sight of this“ central ”object when the zoom factor is increased,” he said. “In addition to more precise mechanical design, video analysis software can be used to compensate.” At short distances, the tasks of controlling the camera also become more difficult with increasing range, Mr. Olsen added. “Simple movements, such as centering an object of interest, turning in its direction or the process of tracking an automatic camera behind an object at a distance of several kilometers, become increasingly difficult, since the panning, tilting and zooming of the camera must be controlled with very little discreteness.”

The representative of the company Controp emphasized that optoelectronics is needed to monitor the border, which allows us to classify the object for quick decision making, noting that the automatic classification improves the quality of decision making and reduces the number of personnel needed. In addition, the installation of extended-range cameras on towers determines the need for improved stabilization, since the towers can sway from the wind and move in different directions due to the fact that their components increase and decrease with temperature. The company also noted the growing demand for optoelectronics for vehicles. This, according to Carney, determines the need to install near, mid and long range devices and various sensors on the same platform. At short distances, a cooled infrared camera is not so important, there is a sufficiently uncooled sensor. For medium distances, maximum focal lengths of 250 or 450 mm may be sufficient, while for longer distances, lenses of 720 or 1200 mm are required. “It is important for suppliers to provide customers with a range of systems and capabilities that meet different requirements, some of which are due to the specific conditions inherent in a given border area,” he said. - While detection, as a rule, is achieved through the use of a radar, optoelectronic systems are responsible for identification and recognition. These tasks require the highest image quality, which can only be obtained with a high-quality thermal imaging camera with stabilization. " The company recently introduced a new system called 3D-GUARD, which it describes as an advanced three-dimensional motion detection video system. Each 3D-GUARD system consists of two fixed cameras with a fixed field of view and a detection range of up to one kilometer. 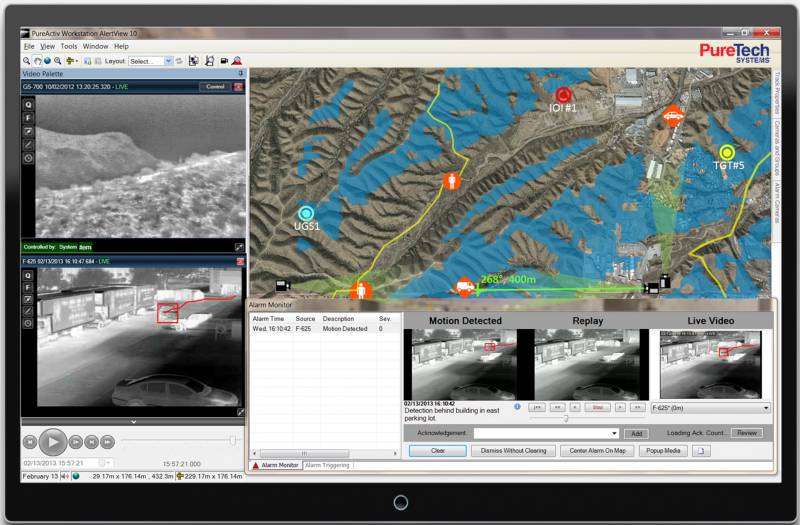 The modernization of the RVSS system, ordered by the US Customs and Border Protection Bureau, is characterized by video analysis and geospatial management functions developed by PureTech Systems as part of an integrated General Dynamics solution, and has this advanced graphical user interface 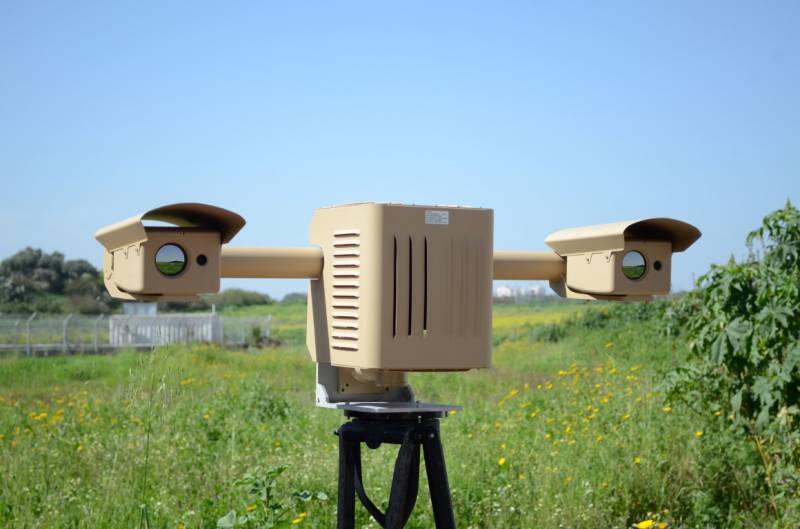 The Controp 3D-GUARD system is based on two stereoscopic cameras mounted on masts or towers and controlled by a central control system. Stationary stereoscopic camera system with a fixed field of view reduces the number of false alarms 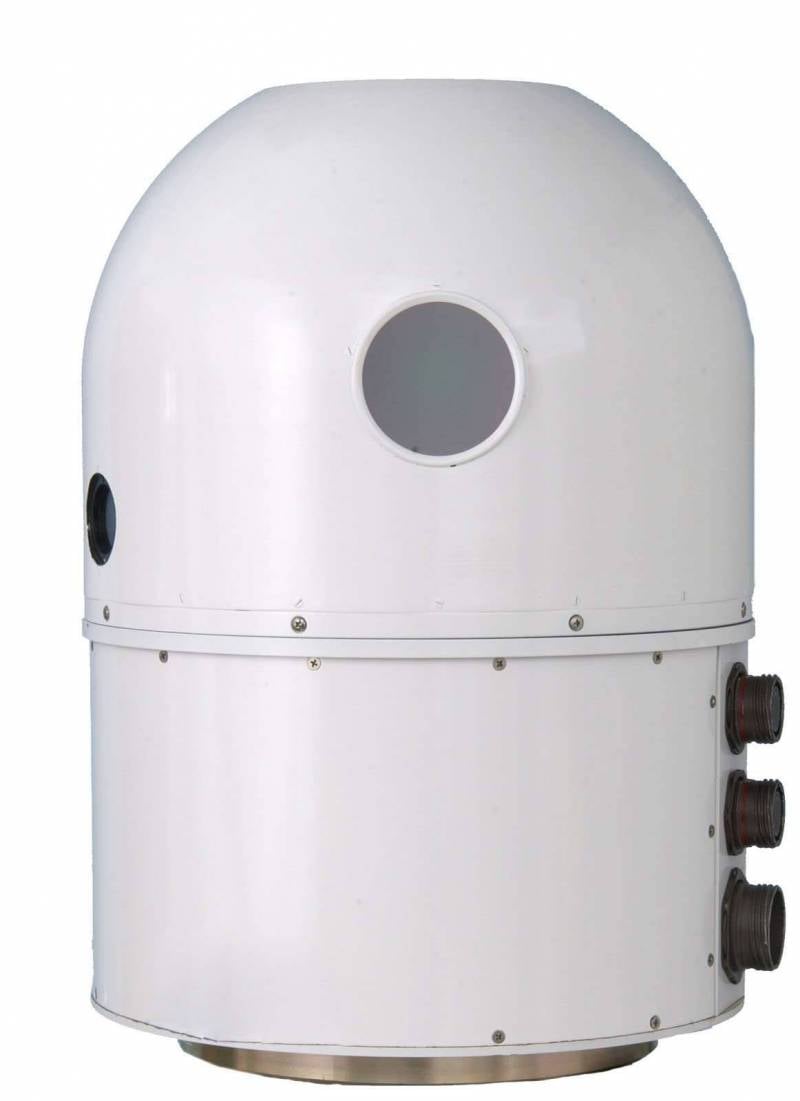 This 24-hour action system, designed to protect strategic objects, as well as guard perimeters and borders, detects moving objects and intruders automatically and triggers an alarm. By providing accurate information on the location of the object, its size and movement, the 3D-GUARD system works as a reliable “virtual fence”. It can be installed on masts or towers, work as a rapid deployment system or as a separate system, managed from a central control point. “The capabilities of this new“ unscanning ”system make it possible to drastically reduce the number of false positives, which is typical of other video analysis systems,” Carney added.

For automatic long-range motion detection, Controp has developed and recently introduced the TORNADO system, which it describes as a “passive, fast-scanning infrared camera providing a panoramic image at 360 degrees”. TORNADO is based on an infrared camera operating in the mid-infrared spectrum (hereinafter simply the mid-wave) with a panoramic coverage and vertical sector from 0 to 18 degrees, which allows detecting airborne objects, in particular, the UAV. “The TORNADO system uses unique software algorithms that automatically detect and track any moving object. It can detect very small objects in hundreds of meters and large objects even tens of kilometers. ” Finally, Controp has developed the SPEED-LR intelligent, long-range, wide-angle, stabilized intrusion detection system that automatically detects motion in a panoramic image. It can be mounted on tripod tower masts and other supports. The SPEED-LR system includes a long-range thermal imaging camera with continuous zoom, a daytime color camera, an eye-safe laser range finder and a laser pointer. It can automatically detect, identify, identify and track objects within a radius of up to 10 km, the company said. 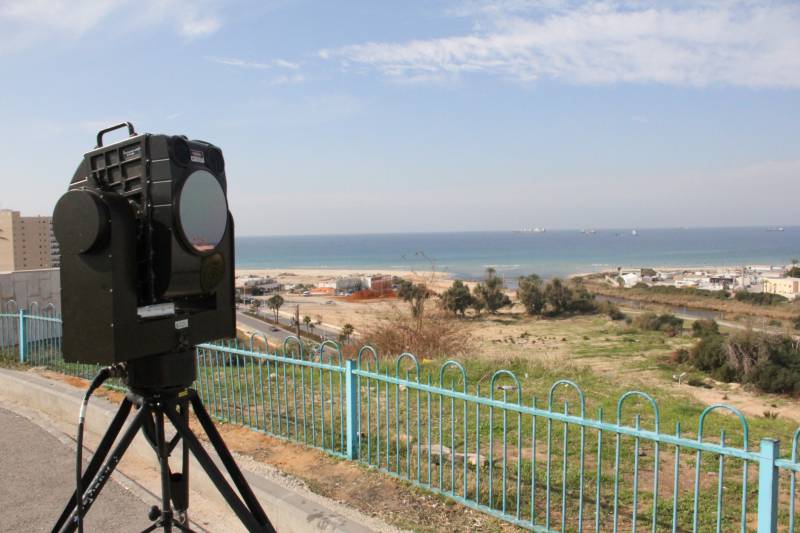 The controp SPEED-LR system, stabilized and therefore suitable for mounting on high masts and towers, incorporates a continuous-magnification thermal imager, a color camera, a monochrome CCD camera, a laser range finder and a laser pointer