Protect you for your money

July 25 2016
59
Billionaire Trump, the US presidential candidate from the Republicans, offered to fork out in Europe for those who are waiting for America "protection." If Mr. Trump is lucky to become president, he will provide defense "help" only to those states that will be able to fulfill their financial obligations to NATO. The rest of America will not come to the rescue: they will have to fight the Russians on their own. 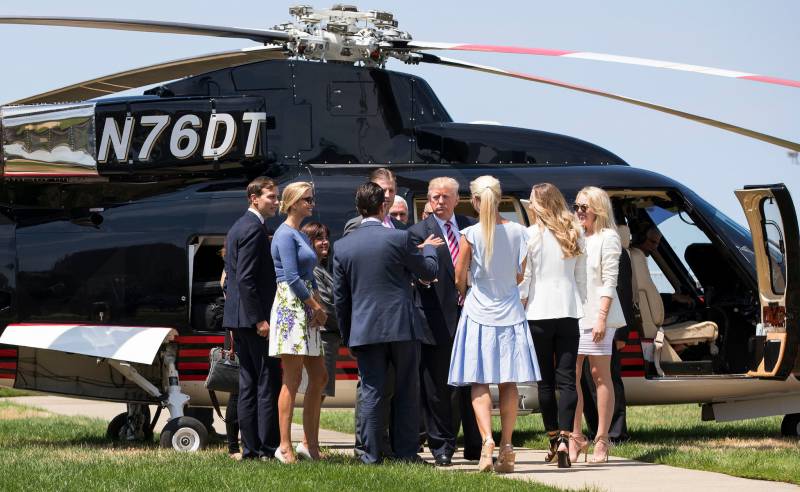 Donald Trump, if only he becomes president of the United States, sets the conditions for NATO allies, reports "New York Times". About this, he told reporters in Cleveland.

Billionaire Trump openly raised the issue of US commitment to the principle of "automatic" protection of NATO allies in the event that those attacked. Mr. Trump believes that before helping the allies, attention should be paid to their contribution to the cause of the alliance.

Answering a reporter’s question about “threats to Russia”, about which small Baltic states that have recently joined NATO are very worried, Trump noted that if Russia attacks them, he will decide to help the Baltics only after considering the issue of their commitment to us. ”

“If it turns out that they are fulfilling their obligations to us,” he explained, “the answer will be yes.”

The newspaper reported that such a statement in the mouth of Trump, it seems, sounds the first time. In essence, the presidential candidate has questioned the very foundations of the United States' assistance to their allies. On the other hand, such speeches are quite consistent with his previous statements about the proposed withdrawal of American troops from Europe and Asia, if the respective allies do not begin to “pay more” for the American defense.

According to Trump, he also will not put pressure on Turkey or other allies who have authoritarian regimes in their countries (this is about cleansing among political opponents or reprisals against civil liberties). The United States, the billionaire believes, must first "eliminate the unrest" in their own country, and only then indicate how to live in other countries. “I don’t think we have the right to lecture,” Mr. Trump said. “Look what's happening in our country!”

He further noted that the rest of the world will learn to adapt to his approach. Trump would “prefer” to continue the existing agreements, but only when the Allies stop sitting on the neck of the United States. The era of "American generosity" has come to an end.

European officials were "a bit overwhelmed by his remarks," indicates the publication. After all, “solidarity between the Allies is of key importance for NATO,” the Alliance Secretary General Jens Stoltenberg recalled. He said, however, that he did not want to “intervene” in the question of the American choice, but he immediately added: “Two world wars showed that peace in Europe is important for the security of the United States.”

The newspaper reminds that the United States has created an alliance, which now includes 28 states. The NATO Treaty's 5 article, signed by President Truman, requires any member to come to the aid of another if this other has been attacked. Such a commitment has long been considered the most important element of deterring potential threats in Europe, especially in relation to small and weak countries like Estonia, Latvia and Lithuania, which joined the alliance after the collapse of the Soviet Union.

Estonian President Toomas Hendrik Ilves, one of the leading pro-American rulers in the region, managed to post evidence on Twitter that his small country fulfilled its defense obligations, and said that Estonia had contributed to the mission in Afghanistan.

In conclusion of the interview, Mr. Trump explained that for him America is first of all a “completely new, modern concept”. And he never connected this concept "with the past." He was asked to clarify, and he replied: "We will first of all take care of this country [USA], and only then we will start worrying about everyone else in the world."

The White House has already responded to the defense "demarche" Trump.

Bloomberg cites a statement by White House spokesman Josh Ernest, which he did to reporters.

There should be no mistakes or miscalculations in the issue of "this country" commitment to the cause of the alliance, he said.

Jake Sullivan, senior political advisor to the Democratic presidential candidate, Hillary Clinton, e-mailed "Bloomberg" that the US president "must be the leader of the free world." Donald Trump, as Sullivan pointed out, "apparently does not even believe in a free world." Sullivan believes that Trump, who does not want to support "an iron guarantee for our NATO allies," is "unsuitable" for the presidency and for the role of commander in chief. It is not surprising that Putin wants to see Trump as president just now, Mr. Sullivan elatedly.

Some Russian experts do not think that Mr. Trump’s current statements can be of great importance if he is elected to the presidency.

Political analyst Igor Pavlovsky said "Free Press"That should not be given special importance to the election rhetoric of presidential candidates.

"It is clear that Trump is actively trying to score political points," said the expert. - It begs the parallel with Obama. Recall what he went with exactly eight years ago, when he stood for the first term. The current US president promised to withdraw troops from all the “hot spots” created by his predecessor, to reduce the defense budget. Having received in advance the Nobel Peace Prize, the newly appeared "dove" went on the offensive on all fronts. Including the continuation of campaigns in Iraq and Afghanistan, "humanitarian intervention" in Libya, an adventure in the Middle East, "Maidan" in Ukraine. "

According to the expert, “even the most charismatic president of the United States remains an absolutely non-independent figure”: in the conditions of the separation of the branches of power, the foreign policy course is developed by the State Department, and the head of state has to reckon with this.

“I have a feeling that after the elections (in case of Trump’s victory) we will get the same situation as with Barack Obama,” the expert concluded.

So let us add, despite some anxiety and concern in Europe and in NATO, manifested due to an unusual Cleveland candidate’s statement, it would be naive to believe that Trump, becoming president, would spit on article 5 of the NATO treaty.

Like previous presidential candidates (the same Obama), as well as those potential candidates who came down from the electoral distance before the summer of 2016, Mr. Trump plays on the weaknesses of the current presidential administration, on her miscalculations and mistakes, building on them his own system of criticism . And it cannot be said that the billionaire did not find a vulnerable point in the issue with NATO allies: US citizens are hardly ready to defend (even with money) those of their “allies” who fear “threatening” Russians in Europe, but prefer the question of “defense” It was decided and funded mainly in Washington. In addition, Trump had previously noted that he would get along well with Putin. It is possible that Putin would get along with Trump, for Moscow has no plans to attack the Baltic countries, already tired of waiting for the “aggressors” on their borders.

Observed and commented on Oleg Chuvakin
- especially for topwar.ru
Ctrl Enter
Noticed oshЫbku Highlight text and press. Ctrl + Enter
We are
Overseas ally? Donald Trump - US Presidential CandidateResults of the week. "Who you are lucky, in fact, and will carry a cock, and such a bird as you, I, too, will rush!"
Military Reviewin Yandex News
Military Reviewin Google News
59 comments
Information
Dear reader, to leave comments on the publication, you must sign in.