Turkish fiasco in the mirror of the coup 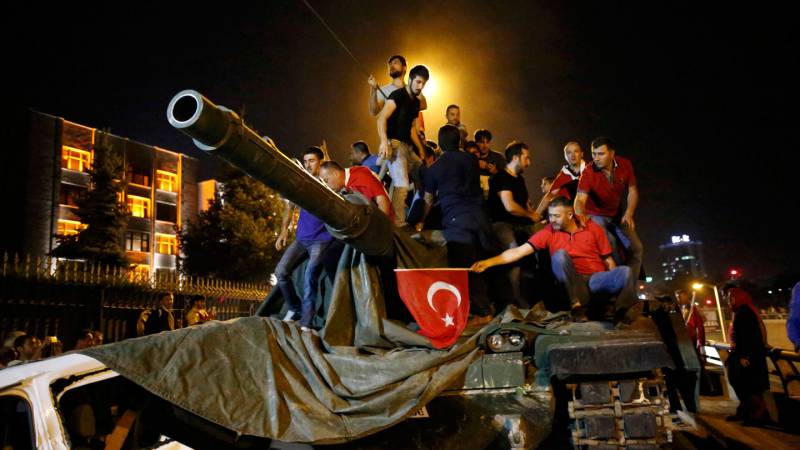 Political ship of R.T. Erdogan crashed on the rocks. In other words, the President’s tactics turned out to be a failure in almost all areas. And the military coup on the night of July 16 is a direct confirmation of this. The latest events in the life of the Turkish Republic were significant: apologies to Russia, the intensification of relations with Israel, the revision of the position on Syria, etc. What influenced the totality of such decisions?

First of all, it is the destruction of the last chance to enter the EU. For the past 30 years, the Turkish state has been making attempts to realize a strategically important goal for the republic - to join the European Union. Long-term accession efforts, including ardent support from NATO and migration blackmail, have not had the desired effect.

Let me remind you that in 2015, an agreement was reached between Turkey and the European Union on the abolition of the visa regime for Turkish citizens in exchange for providing 2,7 with millions of illegal refugees deported from Europe (primarily from

Germany as the most preferred northern country for migrants. According to Eurostat statistics, in 2015, Germany’s share was 477 thousand requests for refugee status). And all this is not free, of course, but at a price of 3 billion euros. Turkey - not a trifle, unlike the same Iraqi Kurdistan. Not having the status of an independent state, the Government of Kurdistan provides 2,5 million refugees, without ever giving a hint about material assistance. However, back to Turkey. Until now, the European Parliament, which is responsible for joining the commission, has put forward various reasons for the rejection of the Turkish state of EU membership: high terrorism, low socio-economic development, an unresolved Kurdish issue, a growing conflict-causing Cyprus issue, one of the last reasons mentioned by the President of the European Parliament M. Schulz in May 2016 is the lack of freedom of speech in the country (I remind you that in recent years the Turkish leadership has repeatedly banned opinions and materials about the terrorist attacks and other events tiyah associated with the activities of R.T. Erdogan).

And this is not the notorious "fight against terrorism and attempts to minimize tensions in the country." This is a violation of the most important aspect of international law regarding journalists, lawyers and deputies - freedom of speech and expression. Another reason given is the authoritarian style of Erdogan’s rule. Thus, the entire 2015 year of the victim of the actions of the “Islamic State” 1 became literally a puppet factor in the hands of RT Erdogan, whom he maneuvered his relations with the European Union. At the beginning of June this year, negotiations were scheduled between the European Parliament and Turkey on the liberalization of the visa regime. And once again, Ankara was refused. And once again, the reasons for it were the unfulfilled requirements 72, which have already become the talk of the town. The German Genocide recognized by the Federal Republic of Germany can be considered the last straw in Erdogan’s patience

which seems to be a political maneuver to put pressure on Turkey.

The genocide has already been for more than 100 years. Discussions about the recognition of its fact in the German Bundestag have been discussed exactly since Turkey has been negotiating with Germany about joining the EU and migrants. And only when the visa-free travel regime desired by Turkey was at stake, did Germany say its “no”, in another language, painful for Ankara. The resignation of Ahmet Davutoglu - a man who was once building “bridges” between Turkey and the EU - made it clear: Erdogan felt the precariousness of a European house with cracks, and ... changes tactics.

30 years cost Turkey not only attempts to become a member of the EU, but also an armed struggle against the PKK (“The Kurdistan Workers Party”), which also turned out to be a failure for Erdogan. Here I would like to point out an important thesis - modern Turkey (unlike totalitarian Turkey before the premiership of Erdogan) began to understand that it was not the Kurdish people themselves who were dangerous, but the PKK (I’d stress that this is the view of the Turkish leadership). In addition, there are many Kurdish parties in the republic legally defending the rights of the Kurds, but not recognized as terrorist by Turkey. It is significant that the head of the pro-Kurdish Democratic Peoples Party, Selahattin Demirtas, not only did not support the July 15 military coup, but also zealously condemned him and called for peace.

Another political failure is unrealized ambitions in the civil war in Syria. The last years of the Syrian crisis have demonstrated the position of the main players on the situation in Syria. The United States and Saudi Arabia are similar in their opinion that New Syria should exist without Bashar al-Assad, this is the only official statement. Turkey is categorically against splitting Syria for one reason: federalization will lead to Kurdish autonomy in Syria in the Iraqi format, and therefore it will also intensify Kurdish activities in neighboring Turkey, giving Turkey a chance of autonomy. Russia has a similar view, speaking for the territorial integrity of New Syria.

Turning from politics to economics, I would like to mention a tourism issue that is relevant in modern times. This is an area in bilateral relations that was primarily influenced by the Russian-Turkish spring.

The costly fight against the "Kurdistan Workers Party", the Kurdish liberation movement in Syria and the fight against the "Islamic state" costs the Turkish authorities a whole lot. And, say, the tourism sector brings the Turkish treasury 6% of all revenues, almost 10% of the population of the country are engaged in tourism. The upcoming holiday season, of course, forces Ankara to take a chance to stabilize economic processes as quickly as possible and to see Russians again on their beaches (which was 79% less than last year). I note that since the period of Turkish repentance, not only regular transportation and flights have been resumed, but also discussions about the Turkish stream 2. The crisis of Russian-Turkish relations froze the project for a long time (in December, 2015 was suspended). However, at present the Ministry of Economy does not see any serious obstacles to the revival of the “flow” and plans bilateral meetings for further actions.

Thus, a military coup can be considered expected, the fruit of R.T. Erdogan. Too authoritarian, ambitious, overly self-confident style of government led to a failed policy, which in turn led the Turkish leader to turn to V.V. Putin for help: stepping up the tourism industry and trade will help stabilize the economy in the country, restored discussions on the Turkish Stream will help Turkey to enter international markets and reanimate its relations with European countries, and Russia's support in the Syrian issue will return Turkey to the goal of becoming Middle Eastern the leader. Of course, reconciliation in the Russian interests. As for the events of last night, a number of analysts believe that Fethullah Gulen, an Islamic preacher and political opponent of the current president of Turkey, leading the ideological struggle against him literally "to death" took part in the preparation of the coup. In addition, Gülen advocates a peaceful settlement of the civil war in Syria. Being a faithful Muslim, he supports mercy, peace, and condemns military intervention and any kind of terrorism. Is it related to the event of the previous night? Shows time. One thing became clear: it was after the appeal of R.T. Erdogan people took to the streets and supported the President, which means that the people are legitimate with the current government and quite possibly support the new Constitution. The Kurdish aspect is significant in bilateral relations: after the plane was shot down, the Russian side reacted to the Kurds unexpectedly attentively, alliedly, even carefully, as if a perennial wall had collapsed. Is it a coincidence? I leave the answer to the court reader. And I sincerely hope that spring in the friendship of the two countries will not negatively affect the Kurdish people. The Kurds should not and are not worthy of becoming a tool in the game of world participants.