July 24 2016
14
The scooter (bicycle) units solved reconnaissance tasks, acted in the vanguard, participated in night attacks. The main tactical feature of these units was mobility, and fighting quality was stamina.
When forming the scooter units, the Russian army almost caught up with its opponents: the creation of the outlined forty companies stopped at 32 in March of 1917. A little later, in the summer, these companies were consolidated into battalions. They made a more than worthy contribution to the fight with the enemy. Why do we know almost nothing about them?

The advantages of scooter units over infantry and even cavalry seemed obvious. Mobility, flexibility, the immediate transition into battle order, the ability to detain the enemy or suddenly attack him. At night, they move fast enough and most importantly - silently. In combat, they can be used completely - one or two people are enough to protect bicycles, while cavalry, if fought on foot, must leave a large number of riders.

In dry weather, these parts easily move along paths, interam, furrows, and with solid, level ground (in steppes) - and along virgin soil. The actions in the 3 and 5 cavalry corps on the borders of Hungary proved that the roamboats freely reached the trail areas, passing through mountain streams with folded bicycles.

Scooter units fought like ordinary infantry, with the difference that the strike group or reserve acted using their mobility. The main feature is the ability to hold down the enemy with a minimum of personnel and maneuver the main forces and means in order to cause the enemy as many losses as possible. The parts could suddenly appear from different directions, with good roads being quickly transferred from one combat sector to another, from the center to the flank and vice versa. Especially valuable were scooters when pursuing, moving defense, maneuvering troops, delivering surprise attacks. In addition to the purely technical properties inherent in scooter parts, their quality was also influenced by the training of personnel in terms of sport.

The armament of the Russian scooter parts was first adopted by the bike system of Gerard - a folding French bicycle model 1890-x, popular at the time. By the beginning of World War I, it turned out to be outdated and was replaced by the Russian model of the Dung and Leitner factories - one of the best in its class.

The scooter units of the Russian army proved by their deed and prowess in various situations. 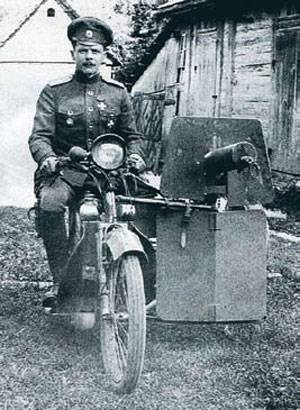 In the spring of 1916, the 3 scooter company was attached to the 3 Cavalry Division. She operated in the Pinsk area, where there were few good roads. Telephones used for communication, guarding the headquarters of the division and as a divisional reserve. Being deployed on the Romanian front, the company participated in the rearguard battles of the 3 Cavalry Division. Near the town of Taraverdy (north-west of Medgidiye) the scooters, occupying a number of heights and the valley - the only way to retreat, detained Bulgarians who bypassed the Russian cavalrymen and covered the cavalry retreat, which saved the left flank of the 47 corps from its encirclement.

But due to the presence of decent roads on the Romanian front, the company was often used for its intended purpose - it participated in the battles in Bukovina, where, moving forward, it captured the frontiers and, using its stamina in gun fights (252 shooter with ammunition 120 patrons per person, four machine guns on motorcycles), kept them until the approach of the infantry. The speed of the movement of military cyclists reached 10 – 17 miles per hour.

In the Lutsk operation 1916 of the year, the 20-I scooter company, which operated as part of the 12-th cavalry division, distinguished itself. In one of the battles during the counterattack, the cyclists lost half of the personnel. Their actions were marked by special orders for the division.

3 and 5 cavalry corps operations in Bukovina, Romania, Galicia and on the borders of Hungary were successfully accompanied by actions 9, 20, 21 and 27 of the scooter company. The same units existed in 1 (1 and 2) and 2 (8) cavalry corps, in some cavalry divisions, but, unfortunately, they were not used everywhere for their intended purpose.

A vivid illustration of the best fighting qualities of Russian scooter units is the battles of 3 and 5 of scooter battalions with superior forces of the German 9 infantry on July 1917 of the year in the village of Malovody and at ferries. Acting on various directions, on the most threatened areas, without the support of artillery and in the absence of neighbors to the right and left, as well as under the threat of detours and enemy breakthroughs to the rear, self-propelled vehicles repeatedly saved the situation. The infantry units in that period retreated, almost without resistance and baring the front.

In the battle on the threatened site near Malovod, the 3 th scooter battalion repulsed the attack of the German 114 infantry regiment, took the ferries and fought until dark. On the outskirts of the same village, the 5 th scooter battalion of a three-quarter incomplete convoy faced the upcoming 143 Kaiser Infantry Regiment. The swift bayonet attack overturned the enemy’s advanced chains, drove the rest three miles and completed the destruction of the enemy’s large combat unit before the German reserves approached. The success of the attack contributed to the sudden appearance of the Russian battalion. The scooters managed to catch up with most of the running Germans, return to their bikes and also quickly move away.

Ctrl Enter
Noticed oshЫbku Highlight text and press. Ctrl + Enter
We are
From the history of own names of aircraft of Russia, 1885-1917 yearsThe last spurt. The June offensive of the South-Western Front 1917 r. 2. Russian army: the power of technology and weakness of spirit
Military Reviewin Yandex News
Military Reviewin Google News
14 comments
Ad