New hydroacoustic complex in the Arctic: facts and questions

July 22 2016
44
On Wednesday, July 20, the media reported on the development in Russia of a new sonar system for underwater lighting, which is supposed to be able to track the movement of foreign submarines in the Arctic Ocean. The Central Naval Portal tells what is known about this project and what place it will take in Russian navy.


WHY DOES IT NEED?

Providing continuous coverage of the underwater situation is necessary to prevent the activity of foreign submarines in their own territorial waters, combat training grounds and areas of deployment. Simply put, to know what is happening under the water before going to sea. In peacetime, the fleet should be able to test prospective weaponsknowing that they will not be watched by a potential adversary. In wartime, the availability of information about the location of the enemy is the main criterion for the successful deployment of forces, including strategic ones.

The ships and submarines of the Navy also have their own hydroacoustic stations, but their range is limited. For example, the GAS Polynom of the atomic cruiser Peter the Great can “see” a submarine at a distance of no more than 50 km. To continuously obtain information about the underwater situation in the extended territory, stationary hydroacoustic complexes are used. On the development of just such a complex and it became known on Wednesday.

HOW IS THE UNDERWATER SITUATION NOW LIGHTING?

Stationary hydroacoustic complexes are quite vulnerable to the destructive actions of the enemy, therefore it is not usual to talk about their presence in a particular area of ​​the World Ocean. Nevertheless, it is known that the sea borders of Russia in the region of Avachinsky Bay of Kamchatka are covered by the Soviet hydroacoustic complex "Dniester", which is a gigantic antenna, held in place by 60-ton anchors. 70 million rubles spent by the Ministry of Defense to dock one of the antennas in 45 indicate that this invention of 2015's time is still in service. 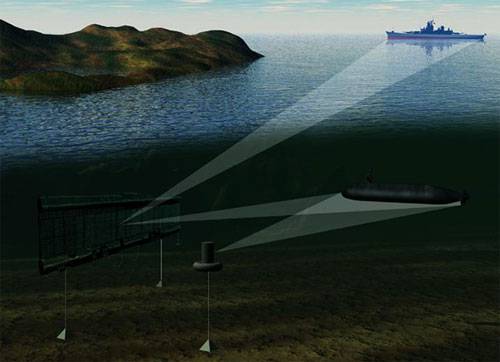 In the Northern Fleet, the underwater lighting function is performed by the MHC-608М sonar complex, which has several 240-kilometer borders placed in the Barents Sea. According to experts, in order to cover the Kola Peninsula bases from the unauthorized approach of foreign submarines, the number of sonar sensors must be tripled. Critics of the MGK-608M complex, on the contrary, declare its inefficiency in tracking the movements of modern low-noise submarines and call for the development of fundamentally new complexes for lighting the situation.

It is obvious that in the dispute between hydroacoustics experts supporting the continued supply to the fleet of MGC-608M serial products manufactured by the Atoll Research Institute and those who advocated the creation of new samples of hydroacoustic tools, the latter won. The leading supplier of a promising underwater lighting complex, which they plan to submit to the Ministry of Defense already in 2017, is the corporation of special-purpose space systems Kometa. This company, although it has in its list of areas of activity hydroacoustics, mainly specializes in space equipment.

A fully developed hydroacoustic system "is capable of covering an area hundreds of kilometers away," an anonymous source in the Ministry of Defense told reporters.

Development company, completion time, approximate length of one line. This is all that is exactly known about the new hydroacoustic complex. Further questions begin.

The first thing that is in doubt is the current status of work on the complex. "Currently, a draft of the new system is being worked out," writes Izvestia. So all the same, is the project of the underwater lighting system being created or is the hydroacoustic complex already embodied "in metal"? To present the timeframes for creating such a technically complex device as a hydroacoustic complex, it is worth noting that only the installation of the already mentioned MGC-608M was allocated more than a year, including 50 days directly to the sea.

The second interesting issue is the method of transmitting data from sensors at sea to the coastal post. “We need to create three circuits: sea, space and land. Sea is hydroacoustic buoys and underwater sensors that take the situation and transmit the received data to satellites of the space circuit,” quoted the representative of the Ministry of Defense of the media. This essentially distinguishes the perspective complex from those currently in service. The latter transmit the most trivial data - by the cable lying on the bottom. The engineer who told reporters about the new development also mentions limitations on the power supply of sonar and satellite equipment, due to the need to ensure the autonomy of the receiving sensors and buoys. This suggests a system of drifting buoys that are not interconnected by wires. However, the need to find buoys on the surface for data transmission over the satellite channel closes the possibility of using the complex in most seas of the Russian part of the Arctic, except for the ice-free Barents. In general, in matters of coverage of the underwater situation again there were more questions than answers.

Ctrl Enter
Noticed oshЫbku Highlight text and press. Ctrl + Enter
We are
Commentary on A. Petrov's interview “Fire and Tactics in the Russian Army: Another Look”What you didn't want to know about England
Military Reviewin Yandex News
Military Reviewin Google News
44 comments
Information
Dear reader, to leave comments on the publication, you must sign in.