July 22 2016
59
The “national-gidnosti” revolution requires the continuation of the banquet: in Kiev, the well-known Nazi-journalist Pavel Sheremet was blown up in the car of his mistress Alyona Pritula, the owner of the main media resource of the Bandera regime - “Ukrainian Truth”. This event is significant and significant. SBU for the first time in Bandera stories expressed including the sane version: the purpose of the murder of Sheremet is to destabilize the situation in Kiev, and, therefore, throughout Bandera. 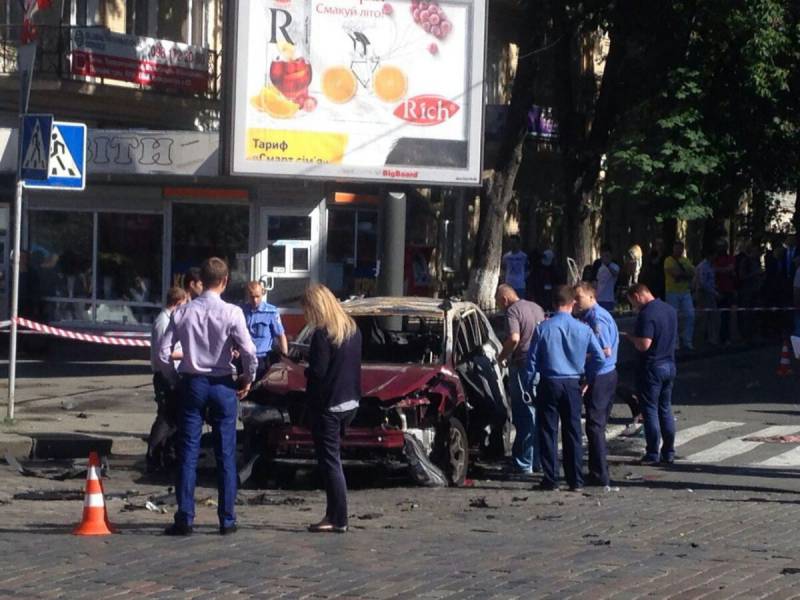 It was for this purpose that Sheremet was blown up, and not simply killed: to kill a person, or to steal, in the center of Kiev today is ordinary statistics, according to independent Ukrainian expert Sharia. However, who is behind this murder and wants to "destabilize" everything? An independent investigation is unlikely to answer this question, because it is political.

Sheremet contacted the Biletsky Nazi company, his battalion "Azov", looked for human in neo-Nazis - and found it! And they blew it up: you don’t need to get involved with a bad company, it’s not going to end well, because all mothers learn as a child.

Biletsky with his battalion now came under pressure from the SBU Gritsak, ordered by President Poroshenko. In the Zaporozhye region, the SBU organized an ambush, and partially destroyed and captured the “heroes of the ATO” to the Azov detachment, which was engaged in the expropriation of the collector vehicle. SBU, together with the APU, under the threat of weapons, they also cleaned the Azov base near Mariupol, from “captured weapons and money”.

And in general, many prominent characters, including the newly baked Prosecutor General Lutsenko, and even the centurion-paradek Parasyuk, openly talk about the preparation by some forces of the armed coup, and mention “Azov”, Biletsky and hint at his patron, Interior Minister Arsen Avakov ...

Therefore, Biletsky, and his chief Avakov, now need a "sacred sacrifice" to become offended, persecuted, and repel the attack of the Cerberus Poroshenko, and, perhaps, go to the very same coup that everyone is talking about today. Sheremet took his last interview from Biletsky, almost a panegyric sang to the Nazi: "Biletsky is progressing a lot ... although his radical Nazi youth sometimes makes itself felt."

So she made herself known: now Biletsky can hide behind the corpse of Sheremet and say that they killed his friend, and he will find the murderers, and we can say with confidence that he will find them surrounded by Poroshenko ...

For the same reason, the conflict of the Security Service of Ukraine is “Azov”, but on the other hand, Sheremet could have ordered the Security Service of Ukraine, also as a “sacred victim”, but of the Kiev regime, which the Azovites killed, in order to try to finish off the “Azov” and other nationalities battalions, and remove their leader Arsen Avakov, and thus remove the threat of a coup.

It must be said here that, as a result of the American external governance of the Bandera regime, the natural course of development of the neo-Nazi revolution of “hydration”, including the mandatory period of the “night of long knives”, was disrupted. All the theoretical ideas of many analysts, including mine, on this issue turned out to be untenable. We pointed, of course, to the influence of the “external control” of the Nazi revolution, but did not foresee such a turn of events.

However, you can't fool the mother story: instead of the “night of long knives”, Bandera now expects a “night of sacred knives”.

The US Department of State, and Vice President Joe Biden personally, banned Bandera from all revolutionary squabbles to unite the revolutionary pressure against the “Russian aggressor,” as a result, the Bandera regime turned into an overheated boiler with neo-Nazis, half-Nazi journalists and volunteers, the Armed Forces of Ukraine, the SBU-CIA and just bandits of all stripes. Now this “cauldron” begins to explode with “sacred” victims, that is, with provocations, with the help of which revolutionary gangsters always eliminate their insoluble contradictions, either with the authorities or with each other.

Apparently, the overheated Nazi revolution will require many more sacred sacrifices to solve their natural problems, so you can get ready for S. Schuster, E. Kiselev, Ganapolsky and others. “The first has gone”, and no one will say who will be the “last” ... One can say, thanks to the American experiment on Ukraine, the law of the “overheated revolution” is open: it ends on the night of sacral knives!

We will not gloat over this, but we will not shed tears either, say the words of Sheremet's fallen death sacred: “In principle, no one, of course, shed tears ... he has done many sins in his life.” So Sheremet said to the death of Oles Buzin. I do not know the sins of Olesya the elder, but Sheremet got completely into Nazi indecency ...

And about Turkey. My analysis, in the previous article “Trump ... and the Turkish putsch”, that Moscow had warned Erdogan about the impending coup, was confirmed by the Iranian media, referring to its sources in Ankara: Russian intelligence transmitted information about the beginning coup several hours before “X hours”. And Lawrence Wilkerson, the ex-head of the apparatus of ex-Secretary of State Colin Powell, confirmed that the CIA "undoubtedly" played a role in the attempted coup in Turkey.

We dare to suggest that the United States and NATO will “lose” Turkey soon, perhaps already at the meeting of Erdogan with Putin in early August. Erdogan is now vigorously cleansing the American "fifth column" in the country, he simply has no other options. Washington will, of course, try to continue destabilizing Turkey, and even our analysts are talking about new Turkish putsches.

However, these “difficult times” for Erdogan are no more complicated than the state before the putsch, but today he has two ally at once, moreover, in the neighborhood: Russia and Iran, under such circumstances, the US efforts to destabilize the democratization of Turkey cannot be successful ...

Ctrl Enter
Noticed oshЫbku Highlight text and press. Ctrl + Enter
We are
The Second Breath of the Black KnivesSituational analysis of the death of the MH17 flight (Malaysian Boeing 777), made on the basis of engineering analysis from 15.08.2014
Military Reviewin Yandex News
Military Reviewin Google News
59 comments
Information
Dear reader, to leave comments on the publication, you must sign in.