Turkey is preparing to throw 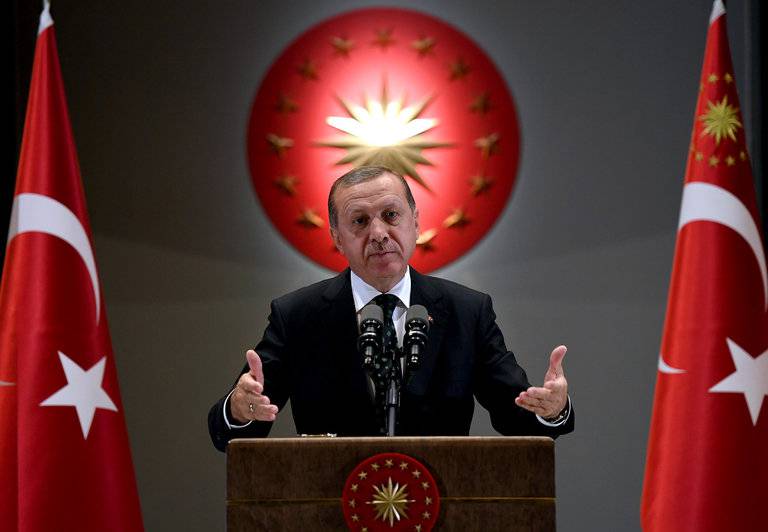 The attempted coup committed by a group of Turkish military did not come as a surprise. The fact that something like this is possible has been talked about for a long time, but the failure of the insurgency does not guarantee at all that Erdogan will continue to rule for a long time and successfully. And the reasons for this are more than enough. At the moment, the spectacle of the destroyed cities of southeastern Turkey outwardly differs little from a similar spectacle of war-ridden settlements in Syria, Libya or Iraq, and the Kurdish paramilitary units are getting closer to creating their own single political space from Iran to the Mediterranean each day. After the alleged unification of the Kurdish "cantons" in Syria, only Turkish Hatay will be on the path of a new national liberation force. The Kurdish rebirth is actively supported by the United States and European countries, who see it as a tool for fundamentally reformatting the Middle East, the largest since the time of the Sykes-Pico agreements, which this year just turned a hundred years old. For Turkey, which actively supported the “Syrian opposition”, which was destroying the Syrian state, the moment of truth has arrived. “Neo-Osmans” realized too late, rampant foreign policy adventurism ultimately leads not to the expansion of imperial territory, but to its reduction, but nothing is possible to play back. You can only reduce the final consequences.

What pushed the Turks to such adventurism? The answer is simple and complex at the same time. The newest история Turkey really reminds us of our own history. This country experienced its “collapse of the USSR” after the First World War, when its significant territories were under the control of the Entente countries. Even earlier, the nation ceded its lands as a result of conflicts with Italy and the Balkan Union. The idea of ​​returning the lost one way or another has been preserved in the Turkish public consciousness for many decades.

Sometimes it seems that Turkey was between two eras. On the one hand, it wants to be a classical empire of the XIX century with all the necessary attributes, on the other hand, the swing to the industrial state-nation of the XXI century is clearly visible. These two goals are in a clear contradiction, although President Recep Erdogan is trying to combine them into one thing.

In Turkish society, for a long time, it coexisted with imperial democracy. True, this “democracy” actually concerned only the Turkish Muslim population. Minorities were subjected to all kinds of persecution and direct extermination. For example, in 1942, non-military Turkey accepted a frankly overwhelming “luxury tax”, according to which Armenians, Greeks and Jews paid much more than Muslims. Those unable to pay were sent to labor camps or brought to suicide. In the post-war history, the barbarous Istanbul pogrom 1955 of the year, directed against the Greek minority of the city, became an equally grim page.

Now the political regime itself is becoming tougher, and the country is clearly preparing for expansion. The geographical position of the country and its scale speak in favor of the imperial path of development of Turkey. The area of ​​Turkey is 783 000 square kilometers, in which almost 80 million people live. Major power by any measure. Ankara has the second largest army in the NATO bloc after the United States of America and a strong military industry in which huge amounts of money are invested annually. The flag of the modern republic largely repeats the Ottoman, and the presidential seal (a sixteen-pointed star surrounded by sixteen stars) is interpreted as a symbol of sixteen historical "Turkic empires". Ankara controls the strategically important Black Sea straits. 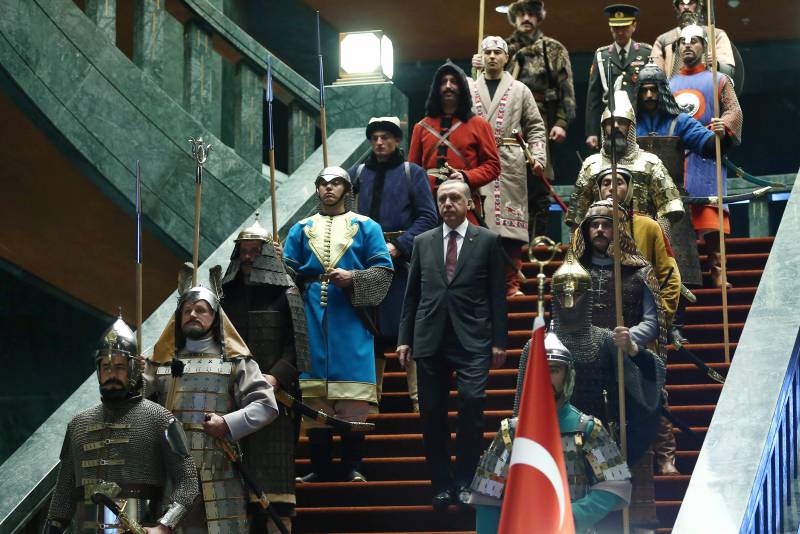 Turkey at all times was a very ideological state, comparable in this respect only to communist China in the time of Mao Zedong. National flags and portraits of the founder of the state can be found here not only in all state institutions, but also on the streets, literally at every turn. And in quantities that clearly exceed all reasonable limits. So state symbols are usually abused either in the newly conquered area or in the territory disputed by the neighboring state. It makes no sense to say that most of the territory of Turkey does not fall into any of these categories, but the atmosphere of expectation is artificially maintained that a certain powerful enemy is just waiting to take these territories back.

For many years, Turkey has been trying to become the leader not only of the entire Turkic-speaking community, but also of the Islamic world as a whole. This is an extremely difficult task, as Saudi Arabia and Iran, countries where Islamic traditions are much stronger, are actively claiming the same role. Obviously, it is for this reason that today official Ankara is increasingly retreating from Ataturk’s precepts in the direction of hard traditionalism both in culture and politics.

Another element in the construction of the renewed empire is the mighty navy. Recep Erdogan's statement about plans to create his own aircraft carrier should be considered seriously in light of the start of construction of the universal landing craft TGC Anatolia. There is an intention to install SM-3 anti-missiles on the latest TF2000 frigates, the number of which is planned to be increased to 8 units. 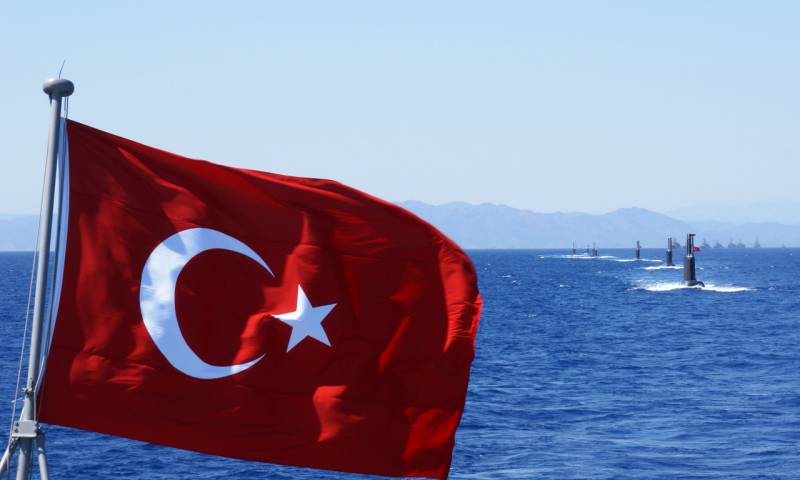 For Russia, all of the above has a very practical interest. The destruction of the Russian Su-24 at once transferred Turkey from the category of just neighbors to the category of countries worthy of close attention. For some time we will have to come to terms with the fact that a nationalist state has emerged on our southern borders with a not too predictable leadership that controls the connection of our largest port (Novorossiysk) with the outside world.

Speaking about the “friendship between our countries”, we should not forget about the Turkish support of Afghan “freedom fighters” and the role that Ankara played in the escalation of violence in the territory of the Soviet Transcaucasus in the last years of the USSR, as well as the rather significant participation of Turkish public organizations in the Chechen wars. And also about the later events related to the Crimea and the war in the Donbass, where Turkey can hardly be called a neutral side. The destruction of the Su-24 only gives the picture a finished look. After this, one can talk about relations with Ankara only in the context of how many “Calibres” may be required for the destruction of the Sinopian naval base, if the situation requires it. For the sake of justice, it should be noted that for the Turkish General Staff we all these years continued to remain a probable adversary, no matter how much oath assurances of eternal friendship may sound.

If there is a permanent one in the world, it is a Russian-Turkish confrontation. Accepting this axiom, it becomes obvious that it would be extremely unwise to build a potential adversary of a nuclear power plant or to pull another gas “flow” towards it, helping to strengthen Ankara’s ambitions. It is obvious that the growth of the Turkish economy will be followed by the growth of military power. And there is not far, for example, until the revision of the status of the Black Sea straits, the encroachments on which Turkey carried out in the first half of the nineties.

At the same time, a classical empire based on traditional Ottoman and orthodox Islamic values ​​is hardly conceivable in the modern world. No, it can be built, but hardly modernized in accordance with the requirements of the era. Such a “new” Turkey, returning to self-isolation, will inevitably follow the path of the Ottoman Empire, which they have been clumsily trying to reform several times, but in the end only led to a total catastrophe.

According to news agencies, Vladimir Putin may meet with Recep Erdogan in August. Intensive contacts and consultations are currently taking place on this issue. The two leaders hardly began to trust each other more, but obviously, in a difficult geopolitical situation, both decided to bury the ax of war. Albeit for a while.

The Russian leadership has no illusions about what Erdogan's Turkey is like. And it deliberately goes to some reputational losses inside the country for the sake of reconciliation with the new “Sultan”. Apparently, at this point in time, such reconciliation is indeed extremely necessary.

The most accurate historical analogy to the present honeymoon of Russia and Turkey is the Rapall agreement of 1922 between the RSFSR and the Weimar Republic. Then also two former enemies in international isolation decided to unite in the face of common difficulties. Only a few years later, German firms, to put it in modern terms, “threw” Soviet Russia, and some time later, 22 June 1941 happened. It is this historical experience that must be remembered, once again rushing thoughtlessly into Ankara’s arms.

Ctrl Enter
Noticed oshЫbku Highlight text and press. Ctrl + Enter
We are
Turkey against the Kurds. Is there a new phase of conflict ahead?The attack on the Russian aircraft and the political situation in Turkey
Military Reviewin Yandex News
Military Reviewin Google News
95 comments
Ad