July 22 2016
204
20 July 2016 of the jury of the Primorsky Regional Court delivered an acquittal verdict against Alexey Nikitin and Vadim Kovtun in the framework of the so-called "coastal guerrillas". If one of our readers has forgotten, the group consisting of residents of the village of Kirovsky of Primorsky Krai was called “Primorsky Partisans” in 2010. The group gained fame as a result of a series of high-profile crimes, including the killing and attempted murder of a number of Primorye law enforcement officers, beatings and robberies of civilians, theft of apartments and hunting weapons, arson of the building of the internal affairs bodies, the killing of representatives of the “drug syndicate” to seize several kilograms of narcotic substances.


Several hundred police officers from the Primorsky Territory and other regions were involved in the detention of criminals. The attackers on law enforcement officers and civilians, who at the same time declared that they, as you see, “were fighting militia”, were hiding from justice in the taiga near Ussuriysk. This gave occasion to certain representatives of the mass media, mostly liberal, to call the criminals “maritime partisans”. The message is that, killing the policemen (policemen) and their civil countrymen, they allegedly "fought for freedom and truth, for the Fatherland." Ultra-liberal members of the public were not particularly worried about the fact that these “partisans” used Nazi symbols in their “struggle for the Fatherland” and in some cases had problems with the law before their maritime adventures (in 2009-2010). However, it was thanks to the liberal press, the cliché “guerrillas” quickly stuck to the criminals, and at the time of their detention the relatives announced that “the political process could begin, and therefore they will consider options for seeking asylum in a foreign country”.

As part of the gang, which, under the beautiful slogans of “fighting against the police arbitrariness,” repaired its own arbitrariness, keeping almost all Primorye in fear, there were very specific personalities.

In particular, Andrei Sukhorad, who was called one of the leaders of the group. Suhorada (b. 1987) was known for being a member of the national bureau of the seaside squad before he had joined the gang and often figured in local law enforcement reports (since the 16 age). According to the official version, he shot himself dead during his arrest, using a pistol stolen from a murdered policeman (the murder was committed before Medvedev renamed).

Another representative of the seaside gang - Alexander Sladkikh born 1989. In 2009, he was wanted for unauthorized abandonment of military service.

Alexander Kovtun, one of the Kovtun brothers in the gang, has undergone an amazing metamorphosis after being detained. If at first he professed radical nationalist views, like most members of the group, then (after the start of the investigation) he suddenly declared himself a supporter of radical Islam, indicating the fact of adopting Wahhabism and changing its name to Saifulla.

Apparently, “police brutality” for these people consisted in the fact that one was not allowed to freely propagate Nazi ideas, another was prevented from hiding after desertion without any problems, and in relation to the third one was put up barriers for his transition to the Wahhabi underground ... And the “arbitrariness of the law enforcement” group, apparently, was that the law did not allow them to freely dispose of narcotic substances, reducing the accounts within the drug groups. 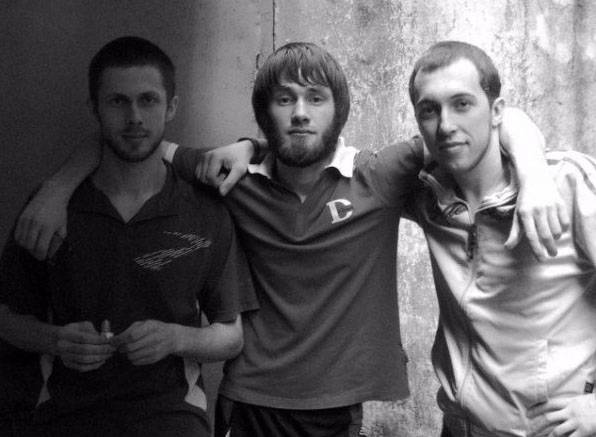 And so, the jury of the Primorsky regional court, which, by the way, was collected almost from the ninth attempt, was announced that (as in that video) “Rafik sasem neuenouen”. Alexey Nikitin and Vadim Kovtun were released in the courtroom, and on the site of Radio Liberty there immediately appeared a “piercing” article by journalist Mark Krutov (the one who made fakie about the “Kalibrakh” falling on Iranian villages flown to Syria ... ") about the" Russian propaganda. " Of Articles:

The episode with the murder in Kirovsky was widely covered by Russian propaganda and was intended to show that the “partisans” are not at all fighters with “Cop lawlessness”, but ordinary gangsters.

That is, they are not ordinary gangsters, but really partisans - so, perhaps ...

As can be seen, Mr. Journalist (aka “Calibram Specialist”) from Radio Liberty announces the killing of law enforcement officers, shootings and looting of the civilian population of Primorye and drug resistance - “fighting Copentian lawlessness”. And all those who consider such activity a criminal offense are “Russian propagandists”. Well, of course, “onizdeti” ... As it is in the Maidanian: killing law enforcement officers, arson, a focus on planting fear among the population, a desire to spread chaos and discord in the whole region. And the “excuse” - they opposed the “Cop lawlessness”. It turns out that “Radio Liberty” with such posts is at least not against the “Cop lawlessness” punishable by the killing of police officers - everyone who happened to be on the road too ... “Freedom”, she is like that.

By the way, the verdict of the jury against the seaside gang is not the first. If earlier the board found all the participants guilty on a whole series of incriminated episodes, and the court imposed severe penalties up to life imprisonment, now it is a strange move backwards.

The same Aleksey Nikitin was initially sentenced by a court (on the basis of a jury verdict) to life imprisonment. Now - let go in the courtroom.

No, it is possible that Nikitin really did not take part in the crimes of the group, perhaps he, as they say, wasn’t in the spirit of a dream, but here the question is different. Well, we have a justice system such that it is possible to convene jurors several times, which will make diametrically opposite decisions every time. If those taken into custody were innocent, then where are the perpetrators? Who led the murders and robberies of the gang in Primorye? Who painted on the points of action groups? In the end, the same Nikitin with Kovtun may demand considerable compensation for 6 years spent behind bars. Who will compensate - the judge who issued the initial verdict, or representatives of the first jury? Oh yes! How many more jury boards can be needed to completely turn this matter into a farce and present the many victims in Primorye, not the victims of the gang, but the victims of the “Cop lawlessness”?

Ctrl Enter
Noticed oshЫbku Highlight text and press. Ctrl + Enter
We are
Results of the week. “We will not allow you to show anything! We will show you everything! ”Police cut. Who will keep order?
Military Reviewin Yandex News
Military Reviewin Google News
204 comments
Information
Dear reader, to leave comments on the publication, you must sign in.