Europe is afraid of "tactics of loners"

July 22 2016
34
According to Europol (European Union Police Service), in 2015, 151 people died and more than 360 were injured as a result of terrorist acts in the EU. Europol published the report “Terrorism in the EU: situation and trends”, which describes in detail the state of affairs in European security. The document emphasizes the so-called tactics of loners, which the militants of the Islamic State and Al-Qaeda adhere to. 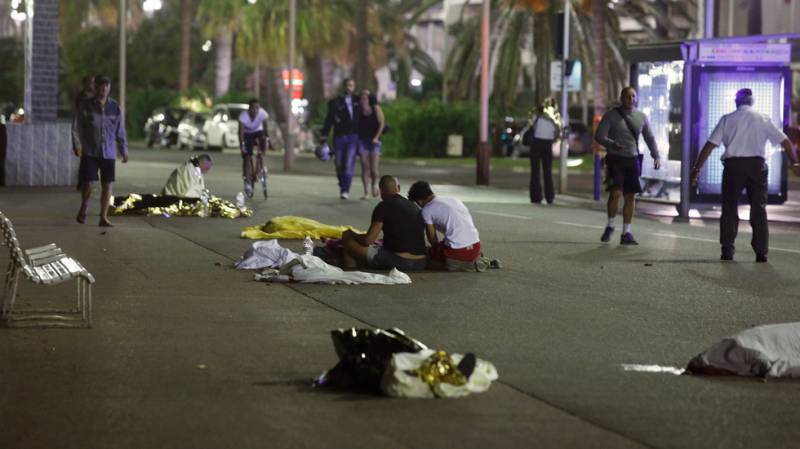 Europol report was promulgated 20 July in the Netherlands.

As noted in this document, 2015 people died as a result of terrorist attacks in the EU in 151, and even more 360 were injured.

94% of them who tried their hand at jihadist terror were found guilty and prosecuted.

According to the service, 211 of terrorist attacks was recorded in all EU countries. This number is the largest since 2006 of the year, when the EU began to keep annual statistics on the relevant issue. In 2015, attacks were prepared, committed and prevented in 6 countries: Denmark, France, Greece, Italy, Spain, and the UK. The maximum number of attacks (103) refers to the UK, next in the list are France with 72 attacks and Spain with 25 attacks.

The overview provided in the police report is an important part of monitoring the situation of terrorism in the EU. In addition to a detailed report on the past year, Europol gave a brief assessment of the recent terrorist incidents. They revealed operational difficulties in detecting “lone attacks” and preventing the aforementioned attacks. Loner attacks are now coming to the fore, according to the website of the police service.

Europol emphasizes that such attacks are a favorite tactic of the Islamic State and Al-Qaida. Jihadists from both factions have repeatedly urged Muslims living in Western countries to carry out single attacks in their countries of residence.

The agency particularly warns that the "IG" at the same time endorses attacks on easily accessible targets, because such attacks "instill much greater fear among the masses."

The director of Europol noted that 2015 had been a year in the European Union under the tragic sign of the mass number of victims of the attacks. In this context, Europol has focused on supporting those operational investigations that relate to the prevention of terrorist attacks and the identification and destruction of terrorists. As a result, a certain strategy of fighting terrorism is being formed.

Currently, as Europol points out, there are two alarming trends: the general threat of terrorism is reinforced by the significant number of militant terrorists who have returned to their country of residence. Many EU member states now fear the growth of nationalistic (xenophobic), racist, anti-Semitic sentiments in their homes. Such a danger exists in all EU countries; therefore, the threat of growth of right-wing extremism is not excluded.

The report also highlights the fact that a significant percentage of all foreign terrorist “travelers” moving from Syria and Iraq are currently women.

On the other hand, there is no concrete evidence that such “travelers” systematically flow into migrant flows in order to get “unnoticed” into coveted Europe. And yet, an investigation into the thirteen November attacks in Paris showed that two of those militants arrived in the EU through Greece and were part of a large flow of refugees heading for Europe from Syria.

The report reports on the importance of creating a European center for combating terrorism, whose task is to combine databases and organize a secure exchange of information between law enforcement agencies.

It is also noted that the 2015 year was a year of legislative changes for EU member states. In order to strengthen the fight against terrorism, 12 member states have passed either new laws or amended existing legislation.

Europol has classified terrorist organizations according to their motivation sources. It turned out that many groups have a “mixture” of motives of activity and ideology, although, as a rule, one ideology or motivation dominates. The categorization of individuals and terrorist groups based on ideology or goals that they share should not be confused with motivating factors and ways of radicalizing individuals and groups, the document says.

Former FSB officer Vladimir Lutsenko is inclined to blame local politicians for the growth of terrorism in the EU.

“It’s not entirely fair to blame for the rapid increase in cases of terrorism. The intelligence services are mainly struggling with the consequences, and the cause of the mass attack of the international punks on Europe is in the policies of European leaders, ”said the expert. Reedus.

According to Lutsenko, those scumbags who crush the children in Nice with a truck have no political task. It is important for them to “prove” to the western man in the street (“the infidel”) that bombers and nuclear submarines are powerless against the “will of Allah”. “In the face of such an adversary, the prospects of Western civilization are not bright,” the expert believes. - The saddest thing is that the leaders of European countries, instead of throwing all their forces and means to fight this plague, suffer from this nonsense: they launch programs to build new Trident submarines or deploy troops in the Baltic States. Are they going to fight on the Tridents in the Syrian desert? Or drown Islamist punks in the marshes of Belarus? "

On Wednesday this week, German Foreign Minister Frank-Walter Steinmeier called on the EU special services for closer cooperation. His statement came a day after the attack on the passengers of a train in Würzburg (an attack was made by an Afghan migrant who was shot by the police).

The situation in Europe is becoming truly gloomy.

Observed and commented on Oleg Chuvakin
- especially for topwar.ru
Ctrl Enter
Noticed oshЫbku Highlight text and press. Ctrl + Enter
We are
Behind the facade of European welfareThe fight against terrorism. An inside look (blog of Ingushetia special forces)
Military Reviewin Yandex News
Military Reviewin Google News
34 comments
Information
Dear reader, to leave comments on the publication, you must sign in.