July 21 2016
69
On the eve, representatives of the so-called Armenian opposition decided to enter into open confrontation with law enforcement officers in Yerevan. The main requirement of those who decided to clash with the police is that the Armenian authorities refuse to respond to those who took hostages in the police department building.


The clashes began with the fact that the "activists" began throwing stones and smoke bombs at the police. Near the police building, which was seized by terrorists, shots rang out the night before. Police responded with tear gas.

Armenian MPs from the opposition called on the protesters to temper the ardor and abandon the clashes with the police, but apparently the protesters were just for skirmishes and went to the center of Yerevan. The clashes continued with a new force. 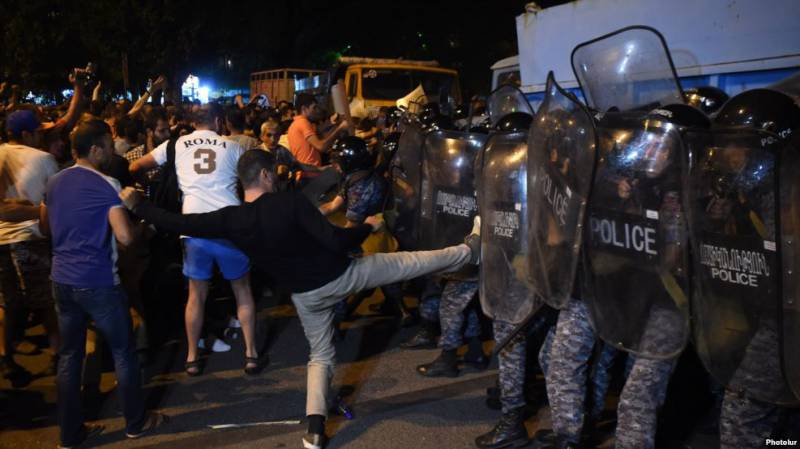 As a result, on Thursday night, the police decided to disperse the protesters. Information Agency TASS reports that during the operation about fifty people were detained. About thirty policemen were injured and injured. Of the protesters suffered about 20 people.

Informational portal News.am reports that the largest number of victims of the night clashes in Yerevan was taken to the Erebuni clinic. Among the wounded are the head of the Socialist Party of Armenia Movses Shaverdian.

Meanwhile, the terrorist group, in fact in defense of which the Armenian opposition comes out, continues to hold the police building along with several hostages.