SAU M36: The American Argument Against The Tigers

July 21 2016
120
After the American army met the Wehrmacht on the battlefield, it quickly became clear that the United States simply did not have an effective means to defeat the heavy German tanks. The main American tank M4 "Sherman" and the self-propelled gun M10 Wolverine (Wolverine) created on its basis with their 76-mm guns were poorly adapted to the fight against new German tanks - the Tigers and Panthers. Fortunately for the Americans, they were able to quickly assess the threat. With the German "Tigers" they encountered back in 1943 in Africa. The results of this meeting seriously accelerated the work on creating a new self-propelled gun on the same chassis of the Sherman tank, but already armed with a 90-mm gun.

Serial production of a self-propelled anti-tank unit, designated M36 and also known as Slugger and Jackson, began in April 1944, in the summer the self-propelled gun was already in the army. However, the installation was late for the conduct of Operation Overlord and the landing of the Allies in France. The M36 ACS engaged the Germans in the fall of the 1944 of the year, and until the end of the war the American heavy tanks, Pershing, were the only truly effective means of fighting German heavy tanks. After the end of the Second World War, the self-propelled gun, which was released in a series of 2324 copies, remained in service with the American army for a long time, having managed to take part in hostilities in Korea, and was also in service with other countries. At the same time, unlike the M10 ACS, not a single M36 self-propelled gun until the end of World War II was delivered to US allies.

In October 1942, the Americans turned to the idea of ​​exploring the possibility of converting an 90-mm anti-aircraft gun into an anti-tank gun, which had a high initial velocity of the projectile. The gun was planned to be installed on tanks and self-propelled units. A similar experience the Germans with their famous "eight-eight" had even earlier. Their anti-aircraft gun, turned into an anti-tank gun, is rightfully one of the most famous artillery systems of the Second World War. 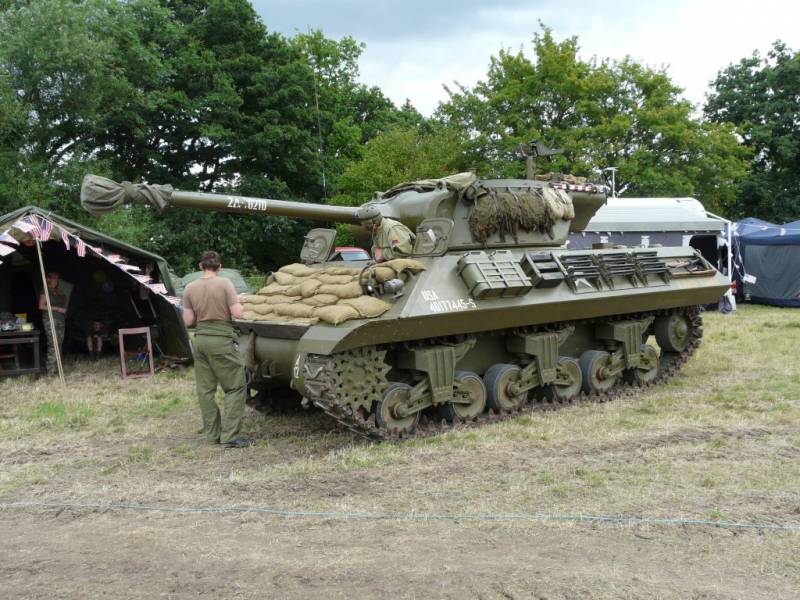 At the beginning of 1943, the Americans tentatively tried to install an 90-mm gun into the turret from the M10 ACS, but it turned out that it was too heavy and long for the turret that was already in place. Therefore, in March of the same year in the United States began to develop a new tower, designed to install 90-mm cannon. It was decided to leave the chassis from the ACS M10. The modified anti-tank self-propelled gun was tested at the Aberdeen Proving Ground. The car was very successful, so the military made an order for 500 of such installations, which received the designation self-propelled gun Т71.

In June 1944, the self-propelled artillery mount was put into service under the designation МХNUMX. It was used by Americans in battles in Europe at the end of 36. Self-propelled gun proved to be the most successful combat vehicle, which was able to fight with German heavy tanks "Tiger" even at long distances. Some American anti-tank battalions, which were armed with ACS M1944, achieved great success with moderate losses.

After the first units were re-equipped with new anti-tank self-propelled guns, the M36 was first used in combat only in October 1944 of the year, during battles on the German border. Since after the losses that the German tank forces suffered in the summer of 1944, massive attacks from them became a rarity, the interest of the American army to the new machine and the speedy rearmament of the existing units fell. But the massive use of armored vehicles by the Germans during the offensive in the Ardennes, when a large number of heavy tanks, including the new “Royal Tigers”, were used, again demonstrated the inadequacy of the M10 SAU as a tank destroyer, again making them a priority for the M36 SAU. By January 1945, there were 6 battalions armed with M36 SAUs, five in the 12 group of armies, and the sixth in the 6 group of armies in the Western European theater of military operations. Statewide, in each such battalion in three anti-tank companies there were a total of 36 self-propelled M36 self-propelled guns. 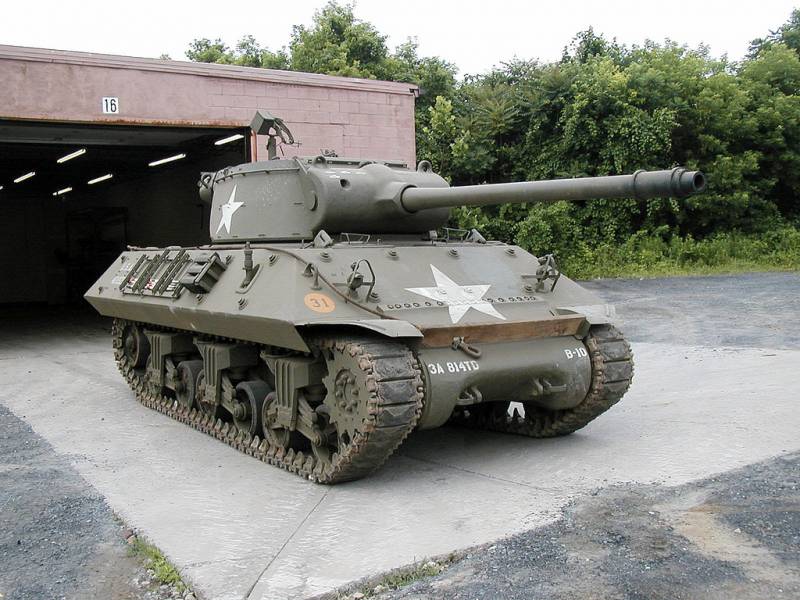 The M36 ACS had a differentiated counter-booking armor, the armor plates were located at rational inclination angles, the combat compartment was open at the top. Various modifications of this self-propelled gun had one of two hull options: the M36 and M36B2 modifications — the M10 ACS hull; the M36B1 modification — the M4A3 hull.

The hull of the M4A3 tank had a similar design, however, it was distinguished by a greater thickness of armor plates and the absence of attachments for hinged armor. The transmission housing was similar to that on the M10 ACS, but the upper frontal part was 64 mm thick and its angle of inclination was 47 degrees. The onboard armor plates of the hull had a thickness of 38 mm, while their upper part was vertical, with the exception of bevels located in the area of ​​the engine compartment. The stern of the SAU housing consisted of upper and lower 38-mm armor plates, which were located at an angle of, respectively, 22 and 10 degrees, and formed a pocket between them, which served to release exhaust gases. The roof of the self-propelled gun body was assembled from 19-mm armor plates and had a slope of 83 degrees above the engine compartment, and the bottom of the case was composite - in front of the thickness of the armor was 25 mm, in the area of ​​the engine compartment 13 mm. 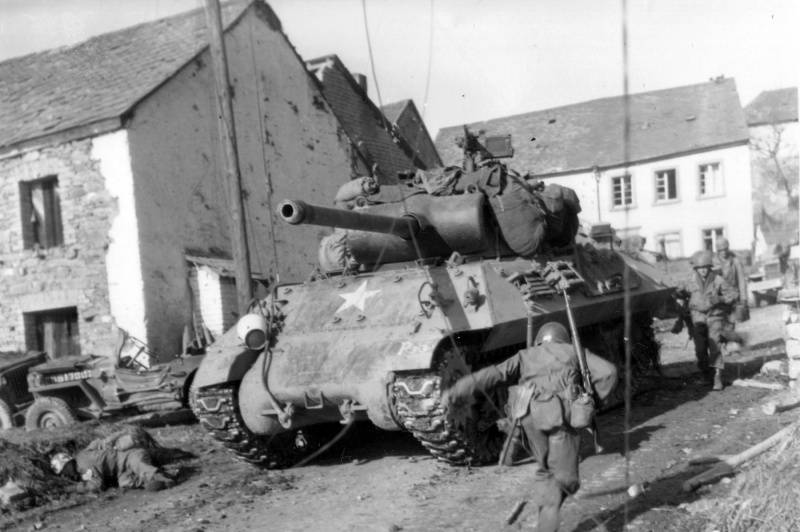 Soldiers of the 301 Infantry Regiment are sheltering from a sudden artillery bombardment in the city of Schillingen. In the center of the tank destroyer M36, photo: waralbum.ru

The solid-cast self-propelled artillery tower, the M36, was identical for all modifications, it was distinguished by a cylindrical shape and a well-developed feeding niche. The sides of the tower had a thickness of 32 mm, on the zygomatic parts they had a slope of 5 degrees, turning into a vertical stern section of the same thickness. The feed for the tower's niche, which played the role of a counterweight, had a significantly greater thickness - 127 mm. The frontal part of the ACS tower was distinguished by its complex shape and was covered with a horizontally cylindrical cast mask of the gun, which had a thickness of 76 mm. The main part of the self-propelled turret was open at the top, but the feeding area, as well as a small section in the frontal part of the turret, had a roof whose thickness ranged from 10 mm to 25 mm. The M36 self-propelled guns of the late editions were equipped with a light-armored turret roof, which was welded from rolled sheets.

The main weapon of the M36 self-propelled gun was the 90-mm threaded semi-automatic M3 gun. This tool had a barrel-monoblock length 50 gauges (length 4500 mm) and a vertical wedge gate. To ensure smooth vertical guidance and balancing, the 90-mm gun MXXUMX was equipped with a spring-type compensator. The technical rate of fire of this anti-tank gun was 3 shots per minute. At that time, the 8-mm gun M90 was one of the most powerful serial anti-tank weapons that were at the disposal of the American army and the only serial tank weapon that could effectively hit heavily armored German tanks at medium and long distances battles. 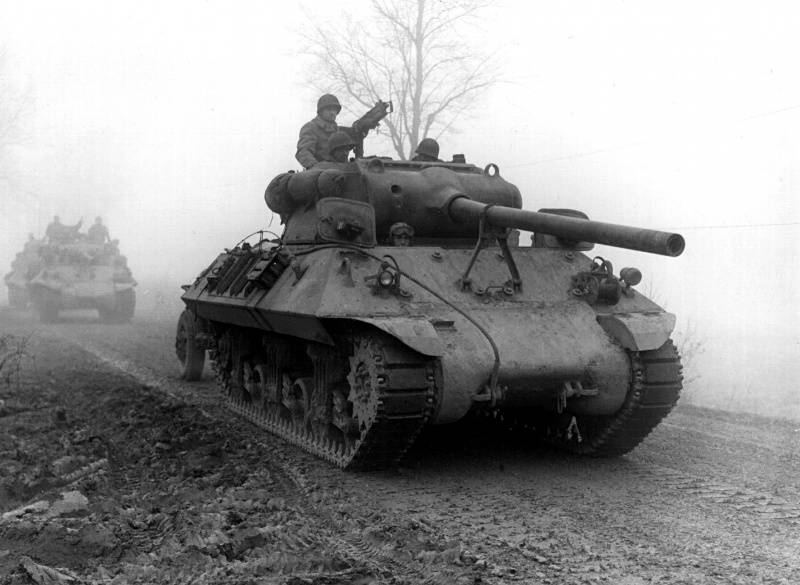 The reticle of the M36 ACS telescopic optical sight was designed for firing M82 armor-piercing projectiles with an initial speed of 808 m / s. She was marked up at a distance of 4600 meters. For firing other types of shells it was necessary to use a special conversion table. For shooting from closed positions on self-propelled guns, there was an azimuth pointer M18 and an elevation quadrant M9, as well as an artillery quadrant M1, which was used to adjust the elevation quadrant.

Auxiliary equipment of the self-propelled unit consisted of a large-caliber 12,7-mm machine gun M2 HB, which was located in the pivot installation, located on the roof of the stern of the turret of the SAU. The ammunition of the machine gun numbered 1000 cartridges, which were in 20 loaded ribbons in the shops-boxes. The machine gun had a rate of fire - 450-550 shots per minute, its combat rate of fire was about 75 shots per minute, and the maximum effective firing range was 1400 meters. For self-defense, the crew of self-propelled artillery mounts were nominally armed with five M7,62 1 rifles with 450 cartridges for them in 30 box magazines, as well as 12 hand grenades of various types. Also as weapons self-defense could be used Thompson submachine guns.

Depending on the modification, the M36 self-propelled guns could be equipped with several engine variants. So on the M36 and M36B1 machines, a V-shaped 8-cylinder carburetor engine of liquid cooling made by Ford was used as the power plant, it was a GAA engine. With a working volume of 18 liters, he developed the maximum power in 500 HP. The fuel for this engine could be gasoline with an octane rating of at least 80. On the M36B2 modification, the power plant consisted of two in-line 6-cylinder diesel engines of liquid cooling. These were the motors of the company General Motors 6046 Model 71. With a total working volume of almost 14 liters, such a power unit could reach maximum power in the 410 hp. 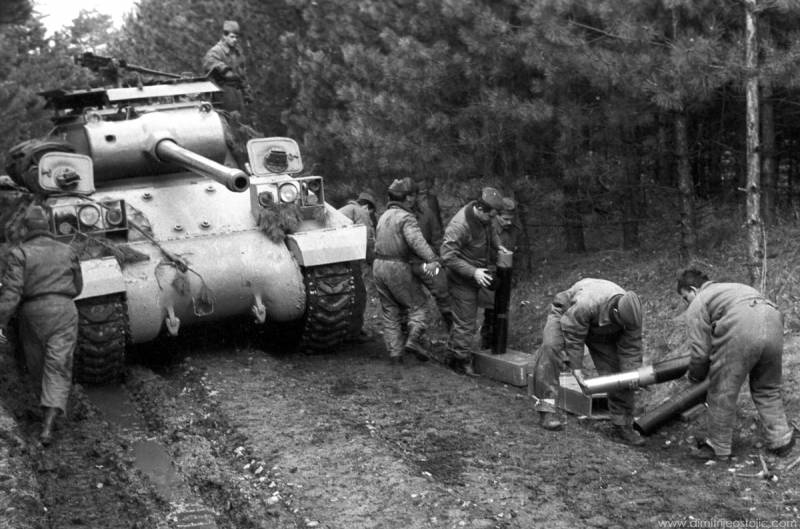 The self-propelled crew members located in the open tower had no special means of observation. The equipment of the ACS was regularly included binoculars M3. The driver and his assistant on the march could observe the terrain through open hatches, and in battle, use periscopic prism viewing instruments with a single magnification M6 for the review of the terrain. One device in the manhole cover and a third one to the left of the mechanic drive hatch, it served to review the sector on the left side of the combat vehicle.

The maneuverability of the fire of the M36 ACS has significantly increased compared to its predecessor M10 due to the replacement of the manual horizontal-angle drive with an electro-hydraulic drive, which equalized the installation with the base tanks. At the same time, the self-propelled gun was equipped with the same relatively primitive telescopic no-joint sight, which had a threefold increase and fixed aiming net. While the later American-made M4 “Sherman” main tanks received a significantly more sophisticated T8 periscope sight, which had a sixfold increase, the specialized tank destroyer equipped with an 90-mm gun and a longer effective range, kept the simplified sight. At the same time, the main advantage of the telescopic sight, which was rigidly fixed on the gun mount, was greater firing accuracy due to the absence of articulated arms between the sight and the gun.

Performance characteristics of the M36 Jackson: