Vitaly Davydov: we decided to complicate the "exam" requirements for the "Avatar" 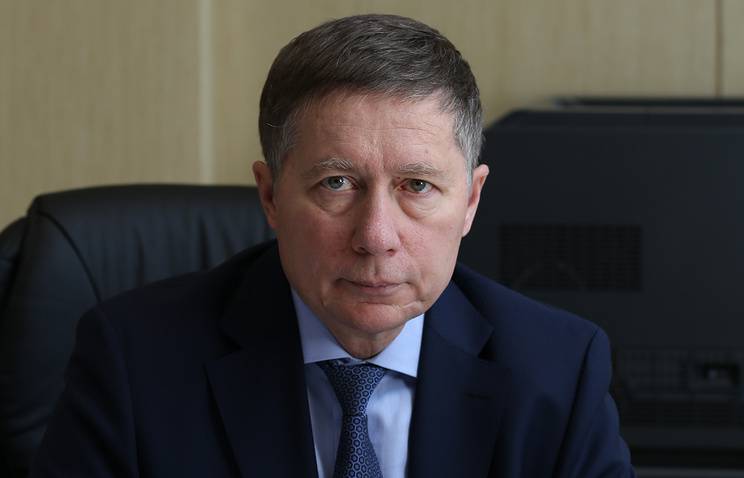 The Russian Foundation for Advanced Studies (FPI) contributes to the development of technology, in particular in the interests of the Russian Defense Ministry. Now the organization is leading the 52 project.

The Deputy Director General of FPI, Vitaly Davydov, told TASS in an interview about the most interesting work of the organization: will Avatar be controlled by the power of thought, at what depth did the experts teach dogs to breathe, what would result in the movement of deep-sea robots and why Russia needs a Herbarium.

- The most famous project of the Foundation is the anthropomorphic robot "Avatar". The robot had to go through an obstacle course and drive a car first by the end of last year, then in spring. Did you realize your plans?

- Work on this project has not yet been completed. The robot has not yet overcome the promised obstacle course.

During the implementation of the project, several problems arose that forced the postponement of the final tests to a later date. This is due, among other things, to the fact that we ourselves decided to complicate the "examination" requirements for Avatar. According to the new terms, the tests of Avatar will be held in the third quarter of this year.

The ability to drive a car is one of the serious requirements for this robotic platform. This procedure was carried out at the stand by the employees of the Foundation’s lab. The Avatar drove the steering wheel, shifted the gear lever. At the same time, he automatically recognized the roadbed, the shoulder, the road markings, went around obstacles.

- One of the functions of "Avatar" is an exact repetition of movements of an operator located at a distance from it. Will it be possible to manage it using the brain-computer interface, another project of yours? At what stage are the works on managing objects using thought?

- Frankly, at the beginning of work in this area, we had more optimism than now. The hope that a person will be able to mentally control the technical means surrounding him and that this will be the control of thought alone, until he has fully justified himself.

We are at the stage of understanding the results obtained during the implementation of the project. Work in this direction will continue, but first you need to clearly understand what practical applications we can count on in the end.

Our task is not only to create an interface for controlling military equipment, but also to help people with disabilities to use their own devices, such as turning on the lights, typing on a computer, and controlling mechanical limbs. To solve these problems, it is likely to integrate into this interface and other control methods, for example, based on tracking eye movements.

- How is the work on another robotic platform - "Nerekhtoi"? What tasks will she solve and when will she go to the troops?

- The Nerekhta demonstration platform can be assigned the tasks of reconnaissance, correction or firing, as well as cargo transportation.

Now we are working on landfills application on the platform of small weapons. In particular, when we demonstrated its work at the TsNIITOCHMASH test site, Nerekhta, within the framework of a given program, knocked out an inscription on the target: "The military industrial complex of the Russian Federation" (Military-Industrial Commission of the Russian Federation). This indicates the high accuracy of both the software product and all elements of the control system created by the developers of Nerekhta.

There are different ways for the operator to interact with Nerekhta, but all of them will be carried out via a wireless secure communication channel. At the same time, the operator can highlight targets on the monitor or use a special helmet of augmented reality, looking at the desired target for its defeat.

We are faced with the task of creating not just a ground attack robot, but an reconnaissance-strike complex, including aerial reconnaissance and additional reconnaissance of targets with special unmanned aerial vehicles, target control with the help of the reconnaissance version of Nerekhta and the destruction of the target with a combat robot.

It’s too early to talk about the timing of the transfer of the robotic complex of the Ministry of Defense, the tests have not yet been completed.
- What is the situation with airborne and sea unmanned platforms?

- We have planned an interesting work on aerial drones related to the development of software for their various intended uses. It is planned to attract a large number of teams to it, each of which will work out its own "software" for a specially created basic aircraft. The project will end with a competition of drones.

As for the unified platform for unmanned aerial vehicles, its appearance is almost impossible. The various tasks imposed on such devices impose significantly different requirements on speed, range and altitude, and payload mass.

On the maritime theme, work is being carried out to create an uninhabited apparatus designed to develop technologies for deep-sea diving and long autonomous navigation. This issue is dealt with by FPI laboratories in the Far East and St. Petersburg. We also intend to involve the institutes of the Russian Academy of Sciences in this work, including for conducting scientific research at very large depths.

- Will the atomic energy source be used in the marine apparatus for long autonomous navigation?

- Not necessary. More likely is the use of air-independent power plant.

- If specialized deep-water robots appear, what is the purpose of the project of human liquid underwater breathing?

- In front of everyone fleets the world has the task of ensuring the rescue of submarine crews from great depths. At the same time, the key problem is associated with decompression sickness, which can lead to the death of submariners during their rapid autonomous ascent to the surface.

If gas mixtures are used for breathing, then, in order to avoid decompression sickness, it is necessary to emerge very slowly, for hours. A person may be injured and in need of lower case medical care, there is a threat to just freeze to the deep. So, you need to find another way to provide the body with oxygen. The way out of this situation is to fill the lungs with an oxygen-containing liquid. A few decades ago it became clear that such a solution was possible, but it did not receive practical application.

Now we are practicing, although the theory is not yet completely clear. We are faced with many questions: we need to find a liquid formulation, ensure the output of carbon dioxide, determine the technology of introducing fluid into the lungs, its elimination, drug support before, after and during liquid respiration. It is necessary to solve the psychological problem - in order for a person to start breathing the fluid that filled his lungs, he must, in fact, voluntarily choke.

We hope that as a result of our work a special spacesuit will be created, which will be useful not only for submariners, but also for astronauts and pilots.

- We are already conducting field tests. Started them with mice and other small animals. Now we are conducting experimental testing on large animals.

At the same time, special attention is paid to the issues of assessing the possible consequences for the organism from switching to liquid respiration, as well as determining the duration of the safe use of this type of respiration.

Today, large animals can breathe at a depth of up to 500 meters for more than half an hour without any health effects.

- What are these "large animals" and how is it determined that they can breathe at a depth of 500 meters?

- As testers, we are dogs. A special submerged capsule was created for them. The tests were carried out in the hydraulic chamber. Immediately I want to note that all test dogs survived and feel well after “immersion” and prolonged liquid respiration. As a rule, after the test, the laboratory employees take the dogs to themselves or give them to friends.

- We expect that the Herbarium will help eliminate Russian dependence on foreign "software."

The enterprises of the military-industrial complex have already experienced the consequences of such dependence, when they have restricted access to updates of previously acquired software. You never know how the situation will develop further, we need to hedge and release their product. Domestic software guarantees the absence of "bookmarks" and reliable software modeling of real physical processes.

Practically all potential customers showed interest in this project: federal executive bodies, state corporations, enterprises of the military-industrial complex. Open beta testing will allow users to collect suggestions and comments in order to release an updated version of the software product after they are taken into account.

- Will the “Herbarium” be available to Russia's allies in the CSTO, SCO, BRICS?

- It seems to me that this will not be any problems. We are interested in our software product having as many users as possible.

- At what stage is the project of the so-called smart bullet?

- Work in this direction continues. The design and experimental development of the product in the uncontrolled mode has been completed, tests in the controlled flight mode have been started.

- How many total projects of the Foundation are under implementation? Do they have enough money?

- Now we have a 52 project in different stages of implementation.

In their framework, the problems of the development of high-precision weapons, robotic systems, means of countering underwater objects, equipment of a new generation, as well as the creation of innovative technologies are considered.

All these projects are provided with the necessary financial resources, since the volume of obligations assumed by the Fund (contracts concluded) does not exceed the amount of the appropriations actually allocated to it. At the same time, in connection with the freezing of the level of financing of the Fund, caused by known economic difficulties, the growth rate of the number of projects being implemented has slowed down. In order not to cut the scope of work, we began to pay more attention to advance projects.

- How will the freezing of the Fund’s funding affect the continuation of work? Do you plan to increase budget allocations for FPI activities next year?

- We expected that, starting from 2017, the amount of financing of the Fund will increase significantly. But, judging by the forecast of the development of the economic situation, the planned growth of financing will not be, and if it is, it will be very insignificant.

Of course, this will negatively affect our activities. Firstly, we will not be able to increase the volume of projects both this year and next year. By the number of ongoing projects, the Foundation will remain at about the current level, that is, in the area of ​​50-60 projects.

Secondly, the plans of transition for a number of projects to the creation of demonstrators will be unrealized, since this requires significantly more funds than for the “paper” stage. Keeping the current level of financing will slow down our work, and will lead to a delay in the implementation of "in the gland" of our developments.

- What projects are completed?

- Completed eight jobs. According to their results, decisions were made to create demonstrators of guided missile weapons, a multi-position radar complex, and a small light complex of a new generation. In addition, according to the results obtained in the framework of the completed projects, work was carried out to create a number of technologies: multipath lithography, control of various devices using the brain-computer interface, and increasing the spatial resolution of satellite images.

Ctrl Enter
Noticed oshЫbku Highlight text and press. Ctrl + Enter
We are
Effort pointsDARPA in Russian is not DARPA at all. Instead of a breakthrough technology agency, another bureaucratic structure is being created.
Military Reviewin Yandex News
Military Reviewin Google News
32 comments
Information
Dear reader, to leave comments on the publication, you must sign in.