July 21 2016
80
David Cenciotti on his famous web site The Aviationist 18 July 2016 published some interesting material about a kind of small air war that occurred over Turkey during an unsuccessful attempt by a part of the Turkish military to carry out a military coup in the night from 15 to 16 July 2016. It should be noted that the reliability of the part of the stated information is unclear. 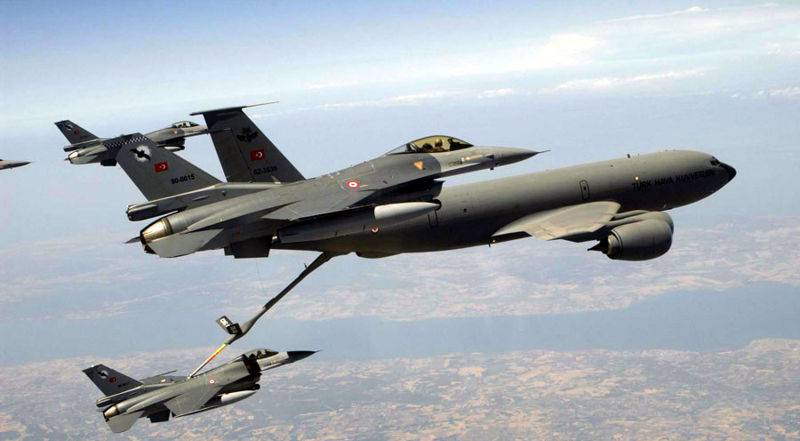 F-16, KC-135R, A400M: known and unknown details about the night of the military coup in Turkey


Here is a record of what happened on July 15, when a military coup was attempted in Turkey. The material is based on information collected by the Turkish military journalist Аrda Mevlutoglu, on the analysis of recordings of programs aviation defendants (Mode-S) and reports that were published by several media outlets after the coup.

Shortly after 22.00 local time, on July 15, the air traffic controller (ATC) 4 air base in Akinji, located northwest of Ankara, contacted his counterpart at Ankara Esenboga airport. The 141-i, 142-i and 143-i squadrons (Filo) of the Turkish Air Force, equipped with F-16C fighter jets, are based on Aqingji airbase.

The 4 airbase dispatcher reported that two F-16 airbase fighters were about to take off, then fly thousands of feet at 21-22, and that their coordination with the Ezenboga ATC is impossible.

After takeoff, Aslan 1 contacted Esenboga and asked for permission to rise to the designated height, which was given to him. Responding to a question about intentions, the pilot answered that he was performing a "special task, will fly over the city of Ankara."

Shortly after these negotiations, telephone calls from the city began to come to Esenboga with reports that planes were flying at very high speed at low altitude. During a time around 22.20 - 22.25, a video was filmed with an F-16 fighter flying over Ankara at roof level.

Puzzled by these messages, the air traffic controller of Esenboga contacted the dispatcher of the 4 air base for an explanation. The answer was: "They are unaccompanied, their respondents are turned off." The air base 4 dispatcher also reported to Esenbog that the new F-16 pair with the call sign Shahin ("Hawk") also took off and is at low altitude.

The Shahin pair threatened civilian air traffic, which was diverted to alternative approaches.

Shortly thereafter, dispatcher Esenboga discovered a KC-135R tanker aircraft with the call sign Asena 02, following from Infirlik's 10 air base. The presence of this KC-135R from the 101 squadron (using Asena callsigns) is confirmed by the data of the defendants collected by the feeder in Ankara.

At this stage, the Esenbog dispatcher did not have any contact with the aforementioned F-16 and KC-135R. Turkish F-16 began periodic air refueling from Asena 02. It is worth noting that, reportedly, four KC-135R (callsigns from Asena 01 to 04 - flew out of Incirlik - noted in the logs of the responders).

It was reported that the planes and helicopters supporting the rebels struck the following targets [in Ankara]:

The headquarters of the special operations police forces on Gelbashi (blows struck from F-16, 47 policemen were killed)

Building of the Grand National Assembly of Turkey

Headquarters of the Turkish Police

It was also reported that the F-16 of both sides engaged in air battles over Ankara and Istanbul, however, no aircraft were shot down in accordance with reports received so far. It is interesting to note that one of the rebels who piloted the rebel F-16 was the pilot who shot down the Russian Su-24, which violated Turkish airspace in November 2015.

F-16 from the airfields of Dalaman, Erzurum and Balikesir flew to intercept the F-16 rebel fighters (the latter were reportedly six).

5-I airbase in Merzifone, which is one of the closest to Ankara, is under reconstruction and closed. All its fighters are temporarily based in Erzurum.

Meanwhile, the tanker Asena 02 left the Ankara area and climbed to the maximum operational height, circling over Kastamonu. Asena 03 took over its role of supporting the rebel F-16. A pair of [government] F-16 arrivals were hoisted on Asena 02 to shoot him down, but did not, probably because he was above residential areas.

At least one AH-1 Cobra helicopter, probably of type AH-1W, fired 20-mm cannon at the protesting crowds and at the building of the Grand National Assembly of Turkey. The same helicopter (or other), as reported, also opened fire on the headquarters of the TurkSAT state satellite television satellite company in Gölbaşı. This helicopter was reportedly shot down by government F-16.

The S-70A helicopter opened fire on the main entrance of the campus of the MIT special services. He reportedly attempted to land a commando with the aim of seizing the object and abducting the head of the special service, Hakan Fidan. This helicopter was reportedly shot down (not confirmed).

One or two AS532 Air Force CSAR combat search and rescue helicopters raided the high-ranking general in Istanbul’s wedding ceremony, which was attended by many generals. Commando CSAR kidnapped them.

Eight transport aircraft (C-160 and A400M - one with the call sign Esem 26, which was already in the air when the coup began) flew out of Kayseri and landed on the 7-th air base in Malatya. They were loaded weaponsintended for use by the rebels.

The F-16 insurgents were looking for President Recep Tayyip Erdogan’s plane (Gulfstream IV with a TC-ATA registration) around Istanbul to shoot him down. According to some media reports, the rebel F-16 already held this plane in their sights - however, it is unclear whether they really had a target lock or, more likely, were only conducting a radar search of the Gulfstream IV aircraft.

The TC-ATA board used the call sign THY 8456 to disguise as a Turkish Airlines aircraft (Turkish Airlines callsign is THY), and the risk of knocking down another plane, as well as a loss of confidence could be factors that prevented the rebel F-16 from knocking the plane down and killing Erdogan.

The TC-ATA board flew from Dalaman to Istanbul Ataturk Airport, which was captured by coup supporters. Air traffic control was captured, all lights turned off. Shortly before the landing of the TC-ATA, the airport was repelled by the rebels (detailed information about Erdogan’s flight here).

Early in the morning of July 16, fighters (probably F-4E-2020) from the 2 air base from Eskisehir struck a bombing strike on the main runway of the 4 air base, while at least one F-16C Block 50 of the Turkish Air Force circled west of Ankara, most likely air patrols. In the afternoon of the same day, the DRLO and E-7 control aircraft from the 131 squadron and F-16 from the 142 squadron flew to the Ankara area, probably in readiness to intercept any helicopter or light aircraft that would try to flee to Greece.

Significant information for this message was provided by Arda Mevlutoglu. Additional information from @CivMilAir and @Avischarf 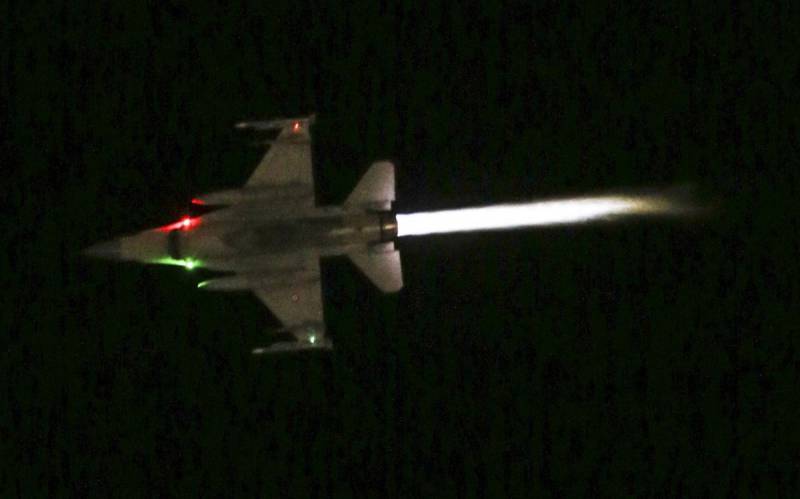 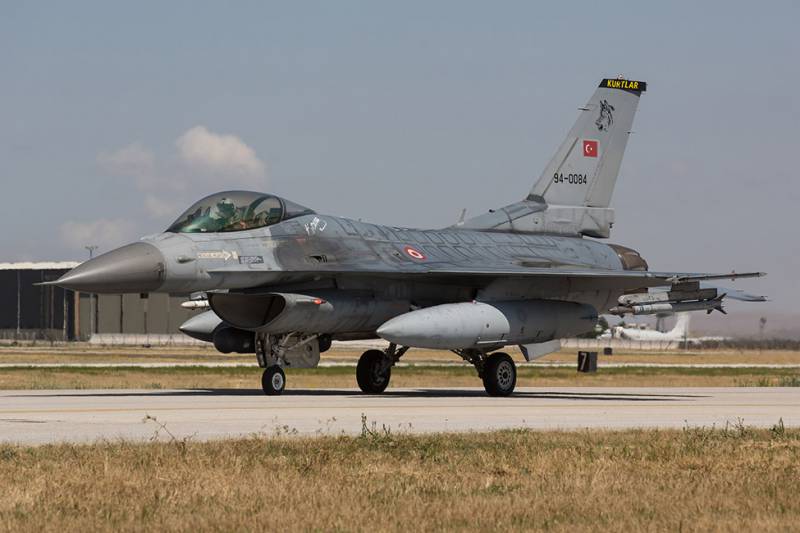 Lockheed Martin F-16C Block 50 Fighting Falcon fighter (crew number 94-0084) from the 141 squadron of the 4 fighter aircraft of the Turkish Air Force in Akinci, June 2015 of the year (с) www.targeta.co.uk

A coup supporter helicopter (supposedly Bell AH-1W) firing a cannon at the headquarters of the MIT (National Intelligence Organization) in Ankara on the night of 15 on July 16:

A coup supporter helicopter (presumably Bell AH-1W) firing a cannon at a police armored car in Ankara on the night of 15 on July 16:

The 16 July bombing of government tactical fighter jets (probably F-4E-2020 from 2-th air base from Eskisehir) on the main runway of 4-th air base in Akinci, which was a rebel stronghold: