July 21 2016
2
Throughout the Second World War, half-tracked armored personnel carriers, primarily Sd.Kfz.251, were used as one of the main means of transporting personnel. Such equipment was used for its intended purpose, was used as a tractor, became the basis for special machines, etc. However, over time, semi-tracked vehicles ceased to command. The industry was commissioned to develop two promising tracked armored personnel carrier projects, known collectively as Kätzchen.


The decision to create new armored vehicles for the transportation of soldiers was made at the end of 1943. Half-tracked vehicles, with all their advantages, were not without flaws. Experts of the German command decided that in the foreseeable future it was necessary to develop and put in a series a new car of a similar class on a crawler. The use of a trackless propulsor without wheels made it possible to achieve the required characteristics, as well as to get rid of the characteristic shortcomings of the existing equipment in service.

Two companies, Auto Union and BMM, were involved in the program for developing a promising armored personnel carrier. They had solid experience in the creation of armored vehicles, and therefore could cope with the task. Contractors were required to create a tracked armored vehicle capable of carrying up to eight people or equivalent cargo, to protect them from firing from small arms weapons and small-caliber artillery, as well as maintain their own fire. The combat mass of the technology was set at the level of 5 t. Subsequently, both projects became widely known under the name Kätzchen (“Kitten”), although other designations were used during the development. 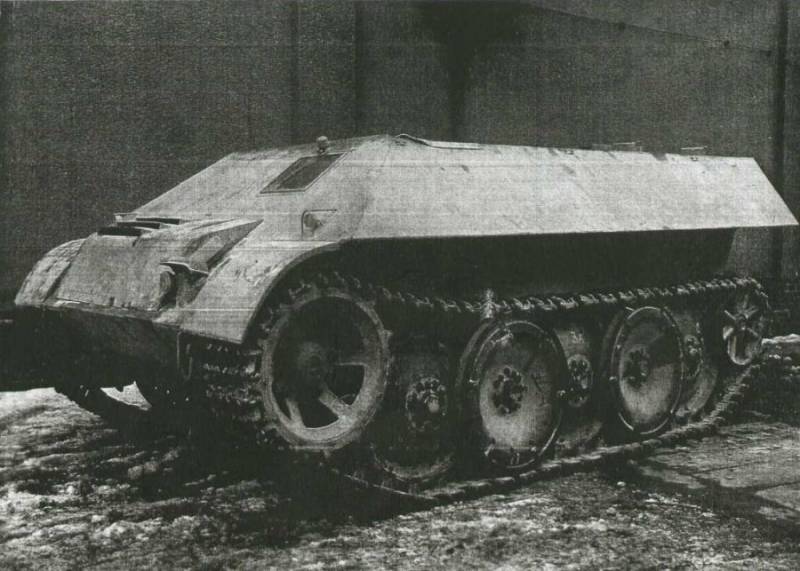 General view of the experimental machine

The project of the Auto Union company received the official designation Gepanzerter Mannschaftransportwagen (literally "Armored vehicle for transporting people") or abbreviated as Gep.MTW. Also, some sources use the designation VK 501, which reflects the required combat weight at the 5 level and the fact that the Kitten project was the first development in a similar weight category.

When creating the new Gep.MTW Kätzchen project, it was decided to do without any radically new ideas and technical solutions. There was a need to develop some new ideas, but most of the features of the machine could be borrowed from existing projects. In particular, the mass of units for the new machine was borrowed from the light reconnaissance project tank MAN / MIAG VK 1602 Leopard. After some necessary modifications, the existing tank could become the basis for the APC.

From the existing project were borrowed the basic ideas used in the design of the armored hull. In this case, the design of the body should have several characteristic features associated with a different purpose of the machine. In particular, the new project "Kitten" did not provide for the use of the hull roof, and the layout of the internal volumes was determined in accordance with the need to accommodate the landing force.

Due to the need to accommodate seats for the landing, the internal volume of the hull received a characteristic layout. In front of the hull, space was provided for the installation of transmission units, and right behind them was placed a single habitable volume. In front of the habitable compartment should have been the place of the driver and the commander-gunner. Along both sides of the hull were placed benches for the landing. In the stern, at the right side inside the hull it was proposed to place a large armored box housing for mounting the engine. 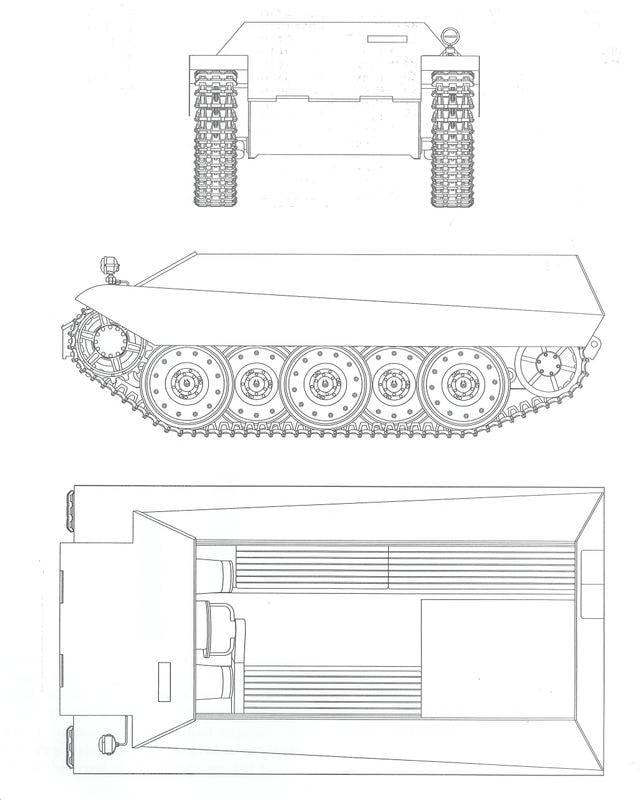 The armored body of the new machine was proposed to be assembled from several armor plates of different thicknesses that could withstand shelling from various systems. The frontal part of the body was formed by two inclined sheets 20 mm thick (according to other data, 30 mm). The upper large frontal sheet was installed with a slope to the vertical. It had an access hatch for the driver and a machine gun installation.

The hull was to receive 15-mm side plates, which were installed to form developed fencing niches. The machine was protected from attacks from the rear hemisphere with a stern sheet, which, as in VK 1602 project, should have been set backward. Some elements of the engine systems, in particular, the radiator and its duct cover, should have been mounted on the stern sheet.

The Maybach HL 50 carburetor power 180 hp should be located in the aft engine compartment of the hull. In the project Gep.MTW, it was proposed to use a new transmission of hydraulic type. Differing from the mechanical transmission of greater complexity, the hydraulic system made it possible to place all the necessary units within the existing armored hull without noticeable damage to the remaining volumes. Thus, the energy of the engine was transferred to the front drive wheels through the minimum required number of mechanical units with their optimal location. 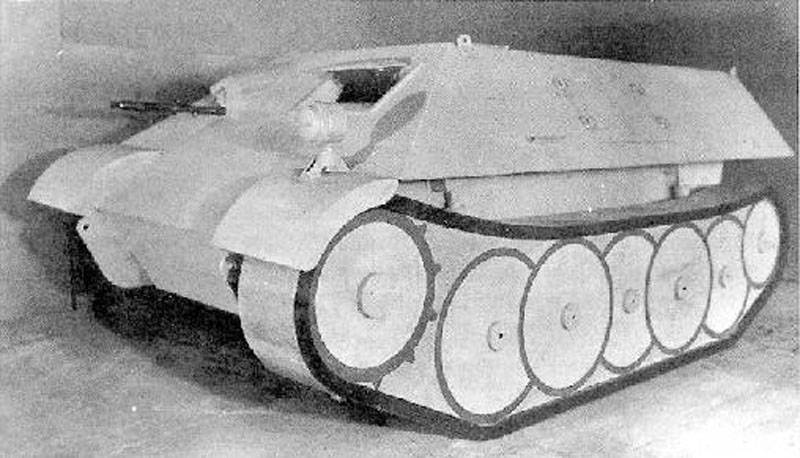 Wooden layout for demonstration to the customer

The undercarriage of the Kätzchen armored personnel carrier was borrowed from the Leopard light tank with some modifications. On each side of the hull it was proposed to mount five support rollers with an individual torsion bar suspension. The rollers of a large diameter were arranged in a staggered manner: three of them were in the inner row, two - in the outer. In front of the hull the drive wheels of the spoke construction should be placed, the guides - in the stern. Due to the use of large-diameter road wheels, the support rollers were not used.

Own crew of the new armored personnel carrier was to consist of two people: the driver and the commander, who also should have been assigned the duties of the gunner and radio operator. The driver's workplace was placed at the left side and equipped with a single inspection hatch in the front hull plate. The driver had a dashboard, a motorcycle steering wheel and a pedal.

To the right of the driver was placed the commander. He had to observe the situation in the front hemisphere with the help of sighting devices of the machine gun, or over the sides. Prospective BTR received its own weapons in the form of a single machine gun MG 34 or MG 42, mounted in the installation of the frontal sheet. The commander had the opportunity to direct weapons within a limited sector and attack manpower or unprotected enemy equipment. Also, the commander’s workplace could have communications at one of the existing radio stations. 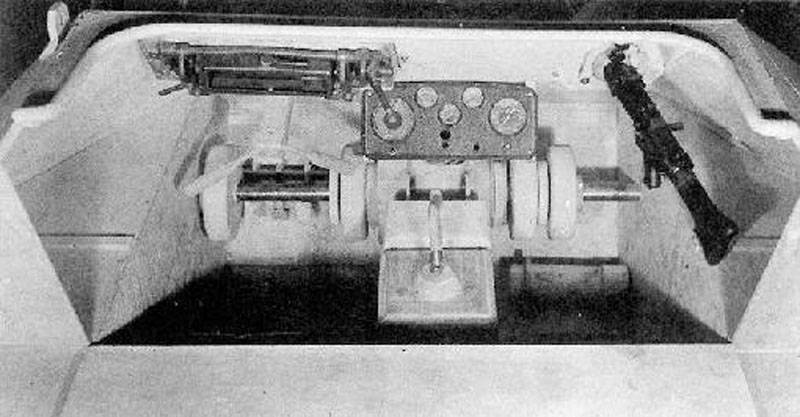 The main task of the car Gepanzerter Mannschaftransportwagen, as was clear from its name, was the transport of troops. Along the sides of the hull, behind the conventional control compartment, two benches of different lengths were placed. The right one was shorter due to the engine cover, and the left one occupied almost the entire length of the troop compartment. On two shops could be located up to eight soldiers with weapons.

The absence of the hull roof allowed the crew and the landing party to fall into place, rising through the sides. At the same time, more familiar means of access inside the machine were provided for in the hull structure. In the rear hull sheet, in its left part, there was a relatively large opening with a double hinged door. The presence of such a door allowed the soldiers to disembark under the cover of the vehicle body and to a certain extent reduced the risks to them.

The new armored car turned out quite light and compact. The total length of the Kätzchen BTR was approximately equal to 4,2 m, the width was 2,34 m, and the height was 1,45 m. km 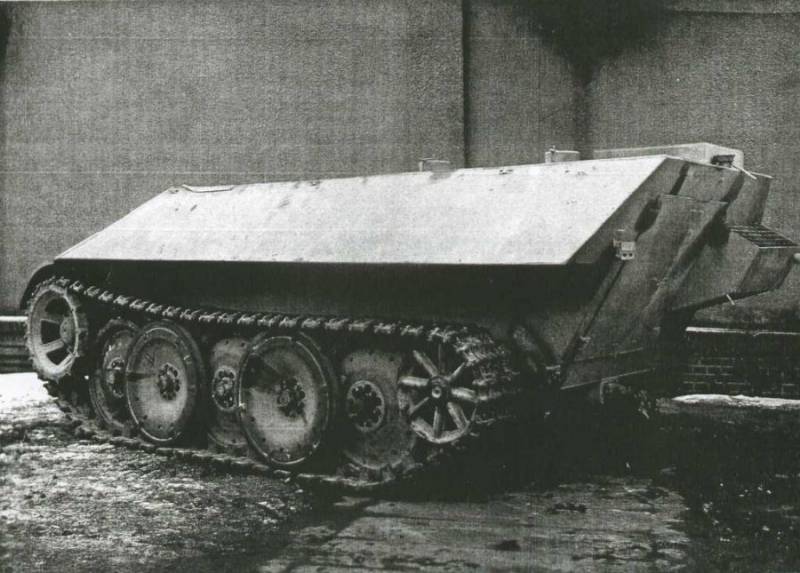 Prototype, board and stern view

The development of a new project in which some original ideas were used lasted for several months. At the beginning of 1944, Auto Union, completing the design, built a demo model of a promising armored personnel carrier. The customer got acquainted with this product, studied the design documentation and approved the project. The developer has received permission to continue the work, construction and subsequent testing of an experienced armored vehicle.

With limited production capabilities, Auto Union was forced to turn to MAN during the construction of an experienced armored personnel carrier. Given the application of some ideas and solutions borrowed from the VK 1602 project, such cooperation does not look surprising. Together, the two firms built an experienced armored vehicle Gep.MTW Kätzchen by the beginning of summer 1944.

Both versions of the Kitten armored personnel carrier were put to the test in the summer of 1944. Testing of two cars, developed by Auto Union and BMM, was conducted in parallel, which allowed not only to check the equipment, but also to compare two cars in the same conditions. 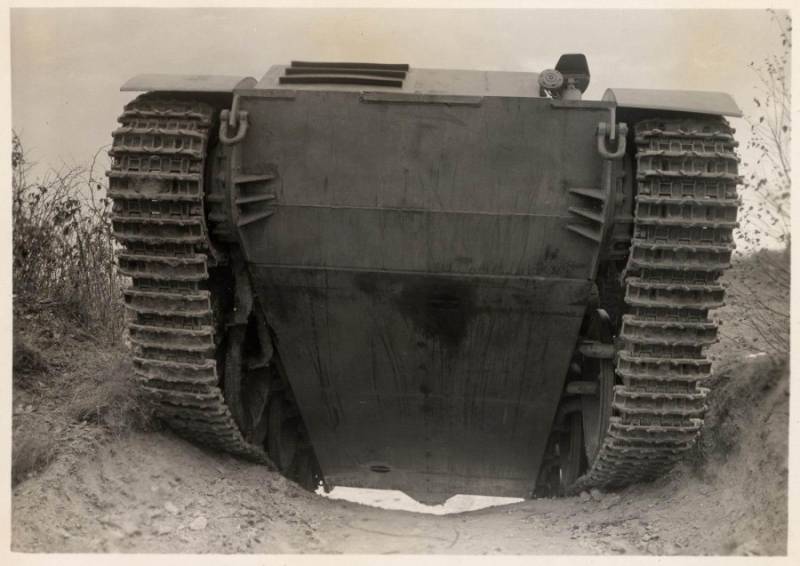 The Gep.MTW armored personnel carrier as a whole showed itself well, but it was not without problems. Tests have shown that the new hydraulic transmission, with all its advantages, is not very reliable. Required revision of its units in order to improve performance. After completion of the tests, which allowed to reveal the project’s shortcomings, the company-developer began to refine the existing design.

The completion of the Gep.MTW Kätzchen project did not last long. Already in September 1944, the military ordered to curtail the further development of the project. The deterioration of the situation on two fronts, the limited possibilities of industry and a number of other factors did not allow Germany to continue working on various new projects. For reasons of economy, serious restrictions were imposed on the use of chassis for new armored vehicles. The kitten armored personnel carrier on the basis of the original chassis did not meet these requirements, which is why the project was closed. Further development was to receive the project of the same name of the company BMM. 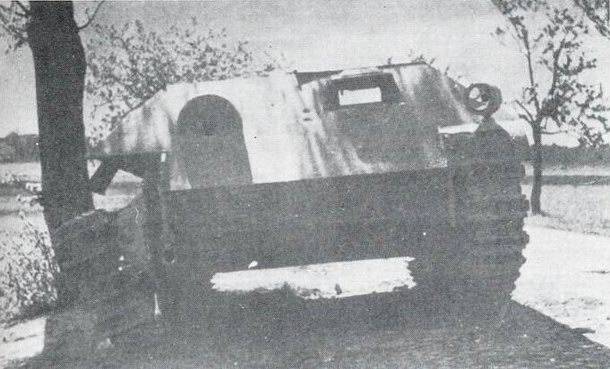 Damaged and abandoned by the crew of an armored personnel carrier

The prototype of the Gep.MTW armored personnel carrier that did not pass all the necessary modifications as superfluous was sent to storage. There is reason to believe that at the end of 1944, or at the beginning of 1945, this vehicle was engaged in hostilities. This is supported by information about its discovery by the Allied forces. In the first months of 1945, the Kätzchen armored personnel carrier from Auto Union was discovered by US troops on one of the roads in Western Europe. This machine for some reason received damage to the chassis, which did not allow to continue its operation.

The captured armored personnel carrier was studied by American experts, however, as far as is known, it was not repaired or tested. Subsequently, the only sample of the machine Gep.MTW Kätzchen went to the smelter due to the lack of real prospects. The model built at the beginning of 1944, apparently, was dismantled even earlier, perhaps even before the construction of a full-fledged prototype.

The goal of the program, known as Kätzchen, was to create a new tracked armored vehicle for the replacement of existing vehicles with a combined propulsion unit. According to the test results, a variant of such a machine from Auto Union was recognized as successful, but in need of further refinement. Launching the project did not succeed: the “Kitten” project started too late to give real results. As a result, one of the projects was stopped at the finishing stage, and the second managed to move a little further, but also did not show outstanding results.