City of London begins its drift from the British Isles

July 21 2016
21
Immediately after the announcement of the results of Brexit that are disappointing for Europe, leading European politicians hurried the British to begin the process of leaving the United Kingdom from the European Union. In this field, almost all the leaders of the main structures of the European Union were noted. There are several reasons for that, but the main one is to quickly determine the new financial center in the EU. Finances, as you know, love certainty and do not tolerate long pauses. 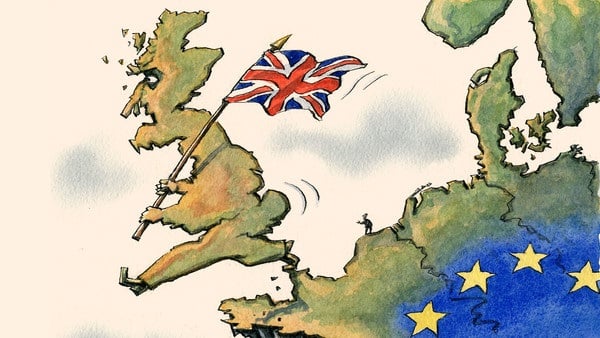 English Thames to German Mine?

London is still considered the informal financial capital of the EU. And let the main regulator of the European Union - the European Central Bank (ECB) - is located today in the German Frankfurt am Main, the main banking, investment and insurance companies are located in the British capital. From here, the European Office of Banking Supervision (EBA) oversees the continent. Now for this wealth turned serious struggle.

It all started with the stock sites. Back in February, the two largest European exchanges (Frankfurt and London) decided to unite. Stockbrokers didn’t hold in their thoughts that some Brexit would happen. They planned on the basis of the Deutsche Börse Group and the London Stock Exchange to create a powerful holding, register it under British law with a legal address in London.

The decision of the shareholders of the new holding was based on the fact that in the practice of their relations, transnational structures traditionally adhere to British case law, and the London platform will be very comfortable for them. Now the situation has changed dramatically. Brexit stands in the way of the euro.

In this regard, the German Federal Department for the Supervision of the Financial Sector and the leading German politicians categorically object to the headquarters of the holding being formed to be outside the European Union. In early July, the deal to unite the stock exchanges received the consent of the shareholders, but everything goes to the fact that the main center of the future holding company will be settled in Frankfurt.

The Germans and those of the European leaders who are in favor of strengthening the prestige of Germany in the European Union want to strengthen the position of Frankfurt not only at the expense of the stock market. The city on the banks of the Main in the informal table of ranks is only 14-th line in the ranking of global financial centers. Now, many see it as the new financial capital of Europe.

Many, but not all. Paris, Luxembourg, Amsterdam and Dublin have already presented their financial ambitions. For Dublin - the ability of companies to work in the field of British law convenient for them, the usual Anglo-Saxon culture and the numerous European headquarters of high-tech American companies located in the Irish capital.

Paris has no weaker arguments. In the French capital, in addition to the offices of the largest banks in the country, the European Securities Market Authority (ESMA) is located. If the officials from Brussels also transfer the European Banking Supervision Authority to Paris, this financial center, at a minimum, will not yield to the Frankfurt one.

There are advantages to Amsterdam and Luxembourg. In addition to low taxes and existing close ties with the current London City, here they count on the mood of European officials. Brussels opposes the concentration of European financial institutions in individual centers, as this can lead to increased influence in the EU of individual states and reduce the role of Brussels itself.

The first signals of this have already appeared. Even on the eve of the NATO summit in Warsaw, Lithuanian President Dalia Grybauskaite called on Germany to take a leading role in Europe. In an interview with DPA, Grybauskaite spoke primarily about protection from the Russian "military threat" and, in a sense, even provoked Berlin. She told DRA: “I think the time has come for Germany to believe in itself more, not to look back and not to seek historical sentiment. "

European politicians paid more attention not to this passage of the interview, but to the call for Germany to become the military and political leader of Europe. They have their own view on the possible Germanic unipolarity of the continent after Brexit. Therefore, the approach of Brussels officials in the distribution of financial flows in Europe will most likely prevail. Companies migrating from London will find a place in the capitals of different countries, and the matter is unlikely to end with the stated five.

American party in the European Brexit

Meanwhile, Washington does not sleep. Of course, he will not take control of the movement of the European currency, but he has already called his native dollar home. According to London's The Financial Times, over the past week, American funds investing in Europe have returned over the ocean about 13 billions of dollars. Now these funds have replenished the stock market of the United States.

Meanwhile, this is by no means a one-time action, but a fully formed trend. According to experts, the withdrawal of American money from European assets is already 23 th week. The dollar has recently strengthened, gold prices have grown, and the situation in European banking is only getting worse. Thus, the amount of overdue debts of Italian banks has already exceeded 400 billion dollars. German Deutsche Bank generally predict the sad fate of the American Lehman Brothers, failed in 2008 year.

As we remember, the global financial crisis began with this bankruptcy. The same difficult situation today at Deutsche Bank. His excessive investments in derivatives, which even the bank employees themselves could not really understand now, brought a loss close to seven billion euros last year. The “bad debts” account of Deutsche Bank has long been running in trillions of euros.

Add to this the negative rates on deposits in major European banks, it becomes clear why Americans today repatriate their capital from Europe, where the stock market lost 3 trillion dollars only in the first days after the British referendum.

It may seem that the United States, after the decision on Brexit, is fenced off from Europe. Not at all. Americans here quickly found their interest. On Monday in Brussels at a meeting with foreign ministers of EU countries, US Secretary of State John Kerry offered his recipe for overcoming the negative economic consequences of leaving Britain from the EU. Kerry announced the increased importance of the Transatlantic Trade and Investment Partnership Agreement in the new conditions.

This partnership has been criticized by many European politicians. The French refused to sign the upcoming agreement. Under partnership in Europe, Americans saw an attempt to put the European Union’s economy under their control, to introduce their consumer standards and environmental standards on the continent.

Now, John Kerry is convincing European colleagues that an agreement on trade and investment partnership will cause strong economic growth on both sides of the Atlantic Ocean, will lead to the creation of new jobs, to a qualitatively new labor opportunity for EU citizens. In fact, the United States is only showing interest in the fact that the financial and economic centers of Europe formed after Brexit include American, with its strong roots on Wall Street in New York.

When not happy with the forecasts ...


Emboldened by the President of Lithuania, the Germans also do not sit with folded arms. On the second day after the announcement of the results of the British referendum, the lobbyist group Frankfurt Main Finance opened a hotline for bankers and financiers who want to leave London in connection with Brexit. This gave the result. According to estimates by The Financial Times, referring to an informed source, "from half a dozen" banks from the United States and Switzerland are already planning to transfer their staff from London to Frankfurt am Main. Numerous contacts of the heads of foreign banks with the government of the federal state of Hessen, to which Frankfurt belongs, were confirmed to the newspaper and by the land minister of the economy, Tarek al-Wazir. So the City of London is already in motion.

Britain does not bode well. During the week, the International Monetary Fund gave a pessimistic forecast for the UK economy. Its growth next year will slow to 1,3% of GDP against previous expectations of growth in 2,2%. Significant change. For London, it is all the more painful that in order to save it among the largest economies here, in the year 2014, they began to manipulate GDP figures.

At the initiative of the then British Prime Minister David Cameron in London, even income from prostitution and drug trafficking was taken into account. For the year, they counted as much as £ 12 billion. Accounting criminal business then allowed the UK to surpass France's GDP and become the fifth economy in the world.

What tricks will have to go to the new British cabinet to convince the world and the citizens of the United Kingdom that the country's economy is developing successfully, we can only guess. This will be all the more difficult to do because the IMF has lowered its forecast for GDP growth rates for the leading countries of Europe - Germany, France, Italy, Spain and the Eurozone as a whole.

This is the first price of a “European divorce”. No one is trying to predict all of its negative consequences for the economy of Europe and the world. Obviously, Brexit led the financial centers in a tectonic movement. The City of London was the first to be concerned about its future, but its drift towards the continent is just beginning ...

Ctrl Enter
Noticed oshЫbku Highlight text and press. Ctrl + Enter
We are
Brexit went to go: in the European Union are ready to leave Britain in their armsBritish referendum brought to Europe a crisis with unclear consequences
Military Reviewin Yandex News
Military Reviewin Google News
21 comment
Information
Dear reader, to leave comments on the publication, you must sign in.