How to check the sincerity of Erdogan? 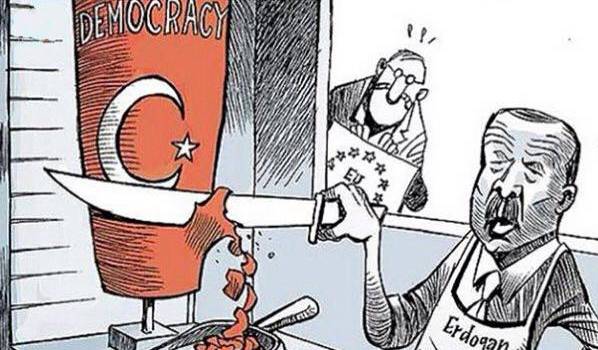 After the failed military coup, the situation in Turkey remains tense, although Erdogan said on the night of the insurrection that everything would be calm by morning. It is reported that 19 July thundered an explosion in Ankara (although the authorities were quick to say that it was just a fire). A day earlier, violent clashes occurred between supporters and opponents of Erdogan in the city of Konya. It is possible that in the near future there will be new clashes and explosions - as the echoes of that night from 15 to July 16.

And that night in the neighboring Syria, the people sincerely rejoiced. As soon as it was reported that a coup in Turkey, that Recep Tayyip Erdogan was possibly removed from power, joyful Syrians rushed out into the streets. Soldiers and fighters of self-defense detachments saluted into the air. A few hours in many Syrian cities was a real holiday.

Yes, the joy was premature. And not only because Erdogan remained in power. Because both sides would be equally hostile to the Syrian people. Like the Kurdish. And we, the Russians.

As a person who personally had a chance to see the city of Kasab, which was half-destroyed with the participation of Turkey, refugees from this city, who spent the night on mattresses in the Armenian church, communicate with people who barely escaped from there, I understand the euphoria of the Syrians.

Erdogan for Syria is a longtime enemy, and one of the most vicious and determined enemies. Those who, being first prime minister and then president of Turkey, supplied terrorists of all stripes throughout the war years in the UAR. weaponsHe helped them financially, bought oil from them cheaply. It was from Turkey that tens of thousands of terrorists from all over the world arrived in Syrian lands (and continue to arrive). It was precisely Turkey who transported numerous riches of the Syrian people - the equipment of factories looted by militants, the products of these enterprises, bread, works of art, exhibits of the museums desecrated ... Those who considered themselves a new and powerful Ottoman ruler personally contributed to all these crimes whose power allegedly extends to the neighboring state.

But what could the Syrians expect from the leaders of the coup if they had won? Stop terrorist support? Mitigate the anti-Syrian position of Ankara? Termination of cases of direct intervention of the Turkish army in the internal affairs of Syria?

Could Russia have expected such steps from the new Turkish leadership if a change of power had occurred? After all, we, the citizens of Russia, Erdogan caused a lot of insults. First, in October 2012, there was an unceremonious search of the Moscow-Damascus aircraft, in which citizens of the Russian Federation were flying. Then - Turkey shot down our military plane, which struck at ISIS terrorists (an organization banned in Russia). As a result, the pilot Oleg Peshkov and the Marine Alexander Pozychnich were killed.

Apparently, hopes for a serious change in Turkey’s position would have been in vain even in the event of Erdogan’s fall. This requires incredible courage and tough political will, which those who led the failed insurrection were hardly capable of.

Even the leader of Egypt, Abdel-Fattah Al-Sisi, who defeated the Muslim Brotherhood in his country, didn’t dare to radically change the anti-Syrian course of his predecessor and opponent Mursi. This course has been moderated only marginally.

And if we consider that among the participants in the coup there were the very military who shot down the Russian plane - it becomes clear that the rebels and the Syrians are not allies at all.

I can’t share the popular point of view that the coup was organized because Erdogan became displeased with the United States because of apologizing to Russia and trying to improve relations. The myth of the “good” Erdogan is shattered, again, if you look at all of his actions. Yes, and the notorious apology sounded too vague.

US President Barack Obama 19 July spoke with Erdogan on the phone and expressed strong support for him. In a statement by the UN Security Council on the attempted coup in Turkey, almost all countries called for "respect for a democratic government." Only Egypt tried to argue weakly.

As we know, a completely different rhetoric sounds to those whom the United States and NATO seriously declare "the enemy of democracy."

True, some European politicians have already expressed their concern about the repression of Erdogan against those suspected of involvement in the coup. Indeed, these repressions are disgusting. Erdogan is so fond of declaring others as tyrants (those whom the United States is really against), although in order to see a tyrant, he only needs to look in the mirror.

The brutal massacre of Erdogan’s supporters over the soldiers, who were made “extreme”, looks especially wild. The guys who carried out the orders of higher-level commanders had to suffer terrible torments - they were brutally beaten in the squares, they were even torn to pieces. Although most of these soldiers fired not a single shot at those whom Erdogan took to the streets (endangering for the sake of maintaining his power).

Now the resisting Turkish president pushes through parliament the decision to restore the death penalty in order to crack down on the vanquished. Many opposition media are closing down. Russian journalists - employees of the REN TV channel Valentin Trushnin and Mikhail Fomichev also got under the hand. Fomichev was immediately sent to Russia, Trushnina was detained and later deported.

Some of the forces opposing Erdogan — from the Turkish Communist Party to the Islamic preacher Fethullah Gulen (whom the Turkish president declared to be the main organizer of the insurgency) —called the event as staged. These forces believe that Erdogan deliberately started all this in order to strengthen his power and crack down on political opponents.

Perhaps this version really has the right to life. Erdogan, it would seem, "on horseback." He created for himself the image of a “hero”, for which, it seems, people came out. Now, opponents expect the death penalty in prisons, the opposition media are repressed, and the “hero” looks almost the “savior of the nation”.

Only it is not clear where this “hero” was hiding for several hours after he ran away from a hotel in Marmaris, where they allegedly tried to kill him. Why did he address the audience first from the smartphone screen, and only then, when the threat had passed, did he risk to appear at the airport? Why was it reported that he was seeking asylum from Germany, then from Britain, then from the Saudis?

Allegedly, our “hero” was taking a great risk, missed with death only for a few minutes. He had just escaped from a hotel in the resort of Marmaris, as a detachment of "murderers" broke into it. Where did he get the information that he needed to “reel the fishing rods” urgently?

And then, it turns out, they tried to kill the unfortunate in the air. Two fighters kept him on sight. But again unsinkable miraculously survived - they wanted to kill him, but they did not kill him. Presumably, however, he suffered a lot of fear.

The hero was not a hero at all, but a tossed hare.

In general, everything looks as if Erdogan’s actions and the steps of his opponents were supervised from the same center. That the coup was really staged, but not Erdogan, but his masters.

Most likely, the United States did not at all attempt at this stage to overthrow the "Ottoman underdog." Still would! It is not good to lose from such an ally, with the help of which a bloody project called the “Arab Spring” was dragged.

But only Erdogan’s positions were staggering. Turkish society has criticized him too much for his ongoing cooperation with the terrorists who flooded the areas bordering Syria. He recalled the slogan: “Zero problems with neighbors,” which, as many joked, turned into “Zero neighbors without problems.” Yes, and the conflict with the Kurds weakened the power of Erdogan.

At the same time, give the command to the rebels to come forward, and Erdogan - to save himself ... Well, this is quite in the spirit of the US special services. After the epic 11 September provocation, 2001 of the year is nothing surprising. As a result, the Turkish president remains and may crack down on the opposition.

On the other hand, even if he sincerely wanted to get closer to Russia, he was clearly made to understand that this was not necessary.

Now the question is how Erdogan will really behave.

Undoubtedly, he will harshly suppress all opposition - both those who are involved in the coup, and those who are not. Will it only strengthen his position?

In fact, the army is one of the pillars of the state. And Erdogan, of course, with his cruelty will turn even more military against himself. Even if many of them do not dare to utter a sound, this does not mean that in the future he will not face the army’s discontent.

At the international level, undue sultan also inevitably undermines its position. Such a step as the introduction of the death penalty will inevitably alienate Turkey from the EU. Human rights organizations, no matter how hypocritical they may be, will still be forced to condemn the persecution of opponents.

His supporters - mostly radical Islamists - are now ready to extol him as a winner. But in case of problems with the economy - he will face the discontent of the population. And problems are possible. Only, it seems, there was a chance for the resumption of tourism from Russia - and again the same problems, for the solution of which Erdogan even stepped over his pride and mumbled vague apologies. Now not many will be willing to go to rest in a country with an unstable situation. And no “All inclusive” will help.

No wonder Erdogan is already beginning to rush. Makes unexpected anti-american statements. Hurries to the phone to talk not only with Vladimir Putin, but also with his longtime enemy - Iranian President Hassan Rouhani. Promises cooperation.

Apparently, he understands that the United States, even if it has been saved for his own purposes so far, can also be scrapped at any time. What if even in the short term he was given to win, then the victory could be Pyrrhic.

In general, Russia should be careful with such an odious and unreliable "ally". While at the same time - to use his weaknesses to their advantage. For example, to demand from him real concessions on Syria, the most important of which is the cessation of support for terrorism. This is the only way to verify the sincerity of his anti-American statements and apologies to the family of the fallen pilot. And also - the depth of his awareness of the fact that for the USA he is just a slave whom they want - they will keep, and they will want - they will throw him off.