Why does NATO absorb Montenegro

July 20 2016
34
19 May at a meeting of foreign ministers of NATO member countries in Brussels signed a protocol on the accession of Montenegro to the North Atlantic Alliance. Now Montenegro participates in the meetings of the NATO Council as an observer, and when all member countries of the bloc ratify the protocol, Montenegro will become the 29 member of this military bloc.


Montenegrin Prime Minister Milo Djukanovic said that he hoped for full membership in the block by the middle of 2017. May 27 Montenegro, represented by its military representative Captain 1 rank Dragoslav Pumpalovic, has already participated in the meeting of the military committee of the bloc (as an observer). Addressing the participants of the meeting, Pumpalovic called the integration into NATO "the number one priority of the Ministry of Defense and the General Staff of Montenegro".

What is still a small Montenegro, the value of which tiny armed forces are insignificant for NATO, is it interesting for the alliance? The whole Montenegrin army has a little more than 2000 people. Since Montenegro withdrew from the State Union of Serbia and Montenegro in 2006, its army is only doing what is “reformed” and reduced. 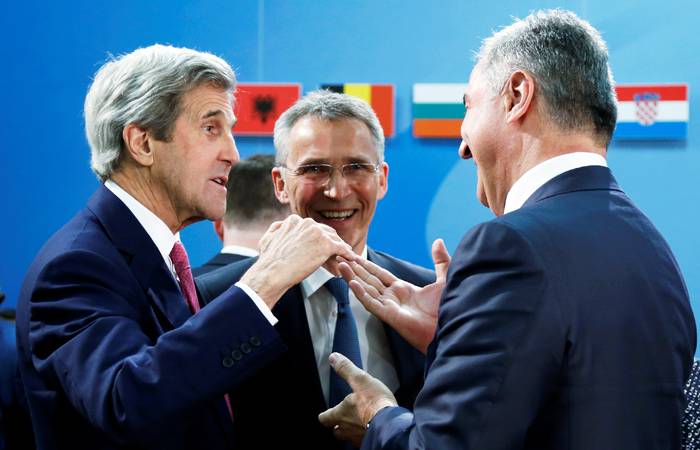 There are no ground forces in Montenegro. Previously, there was an infantry brigade, but it was disbanded, and the infantry and rear battalions from its composition were transferred to the General Staff. In addition, the army has companies of the military police, intelligence and communications, as well as the guard. In fact, only one infantry battalion is able to conduct combat operations. It is equipped with several armored personnel carriers and vehicles, there are also mortars and anti-tank systems. There is no heavy equipment - the Montenegrins didn’t get BMPs, and out of 62 tanks T-55 all but one car were fired at metal ...

The air force in Montenegro is also symbolic. All Montenegrin air force has 230 man and airbase in Golubovtsy. Only 9-10 helicopters can climb into the air, including five Gazelles made back in Yugoslavia. Another fifteen helicopters and several aircraft are in storage. They do not plan to restore them or acquire new Montenegrin military. According to the plan of the General Staff, announced 25 February, the Air Force in the future should be represented only by transport helicopters. They now include an air defense company, equipped with outdated Strela-2 MANPADS and Bofors anti-aircraft installations. Under the pretext that the republic’s sky remains uncovered, two days after Montenegro’s accession to NATO, it concluded an agreement with a member of this block Croatia, according to which Croatian specialists stationed at the Golubovci airbase will control the republic’s airspace.

Montenegrin fleet numbering 350 people is also of no greater power. Of the fighting ships inherited from Yugoslavia, two frigates of the Kotor type and two rocket boats of the Konchar type have survived. Currently, they are being converted into patrol ships, heavy weapons dismantled on them.

From a military point of view, only the former Yugoslav naval base in the Bay of Kotor represents a certain value for NATO, but its present state leaves much to be desired, it needs regular maintenance and equipment with basic equipment. The plans of the Ministry of Defense of Montenegro for the development of military infrastructure to allocate 20 million euros, but it is not known whether the work on the modernization of the base in Kotor Bay will be financed.

The real reasons for the hasty accession of Montenegro to the alliance are dictated, most likely, by the political situation in the Balkans. In Brussels they expect that, once in NATO, Montenegro will, firstly, alienate Russia, and secondly, serve as an example for neighboring Serbia. After all, the Serbs, who have not yet eroded the memory of the barbaric bombing of 1999, remain a problem for NATO. And in the Republika Srpska in Bosnia and Herzegovina, they also remember about the NATO bombing of 1994-1995. and generally about the role of the alliance in the Bosnian war.

If all 28 of the NATO member countries ratify the protocol on the accession of Montenegro to the alliance, this will have a demonstration effect. Living in Western grants NGOs in Serbia and in Montenegro tirelessly assert that the more Serbs will be within the bloc, the better. An organization called the Atlantic Union of Montenegro directly writes on its website that if the Serbs in Montenegro see themselves as part of NATO, it will make the whole of Serbia and the Bosnian Serbs, who for now “block accession to the Bosnia and Herzegovina bloc.” Atlanticists from Montenegro claim that the North Atlantic Alliance will give this republic large financial injections, a stable democracy, and most importantly - “protection against Putin’s aggressive policies.” First of all, the propaganda of these NGOs is aimed at Montenegrin youth, who are brainwashed in various forums and seminars.

The truth is that Montenegro will not receive any protection in NATO. The North Atlantic alliance has not protected anyone for a long time, but there are enough examples of aggression committed by them. Joining the alliance will largely finish off the already complicated relations with Russia, which Djukanovic successfully spoils for many years. Montenegro itself will be embroiled in all sorts of adventures, and the Montenegrin military will be used as cannon fodder in third-rate areas. However, at the upcoming parliamentary elections in Montenegro in September 2016, Montenegrins still have a chance to say no to Djukanovic and his catastrophic policy. In any case, these elections will be a referendum on the issue of NATO for Montenegro.

Ctrl Enter
Noticed oshЫbku Highlight text and press. Ctrl + Enter
We are
Left, but promised to returnMetropolitan of Montenegrin Amphilochius: "NATO is a national-fascist pact that continues the work of Hitler and Mussolini"
Military Reviewin Yandex News
Military Reviewin Google News
34 comments
Information
Dear reader, to leave comments on the publication, you must sign in.