Fighter 6-th generation: tomorrow for Russia and the United States

July 19 2016
137
Advisor to the First Deputy General Director of the Radioelectronic Technologies Concern (KRET), Vladimir Mikheyev, in an interview with TASS, said that the sixth generation fighter is in full swing. And even called approximate dates. 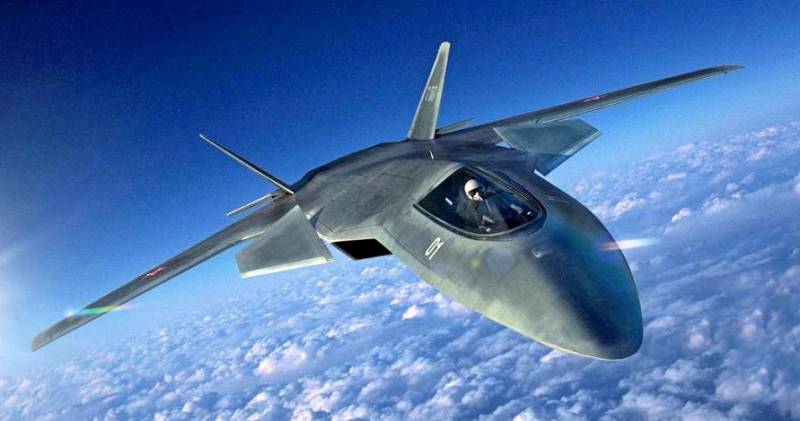 Vladimir Mikheev: 6 generation fighter will be armed with electromagnetic guns.

UAC (United Aircraft Building Corporation) believes that the prototype of the 6 fighter generation can make its first flight in 2023-2025. And you can talk about full readiness after 2030. Research work in this direction is already underway.

On the one hand, it’s weird to talk about the generation 6 fighter, when the 5 fighter is not yet up to mind. On the other hand, prepare a sleigh in the summer, and a cart in the winter. And there is a certain logic.

Some aspects of the project are interesting. Fighter plan to create a "two faces." The first option - manned, the second - unmanned. And the first modification will be able to fly in the drone mode. But it will be two different aircraft.

Unmanned version will have greater combat capabilities than its manned fellow. Since the human body still has certain limits on physical exertion, the unmanned fighter will be able to develop greater speed, perform more complex maneuvers in terms of congestion, and even go into space. It's about hypersonic speed.

The piloted version will have several other features. In general, the most effective aircraft will operate in a flock. That is, one or two pilots on the aircraft of the first modification will serve as the command center for the unmanned fighter 2-4. Something like this today can act MiG-31BM for other machines.

Unmanned airplanes are supposed to be equipped with a certain artificial intelligence, so that in battle they can effectively distribute goals among themselves and coordinate their actions, both with commander machines and among themselves. This or approximately such a scheme is used today in the ICBM Liner.

It was noted that the aircraft will be able to work in conjunction with ground forces and warships.

When creating a new concept, designers plan to stick to the strength of Russian aircraft, namely, high maneuverability. The speed qualities are expected at the lower threshold of the hypersound, the estimated maximum speed is about 5M. A cruising, without afterburner, not lower than 2M.

And here we can expect the problems that Soviet and American designers faced in the last century. It is worth remembering that the American HV-70 "Valkyrie" when flying at a speed of about 2,5-3М heated to 3 000 degrees. At the same time, it was completely made of titanium and stainless steel and weighed about 230 tons. Domestic hypersonic aircraft T-4 and M-50 also did not differ ease. M-50 in take-off weight was not inferior to the "Valkyrie", T-4 was lighter (about 150 tons), and the construction also used titanium and steel.

Obviously, the construction of a fighter, the tasks of which are somewhat different from the tasks of the reduced aircraft, should be much easier. Therefore, we are talking about the development of new materials that can provide both strength and resistance to high temperatures. After all, it will be necessary to protect not only the airframe from heating by friction against the air, but also the engines from overheated air coming from the air intakes.

And for the proper safety of pilots, thermal insulation probably should be no worse than that of reusable spacecraft.

Stealth technology will also be given special attention. Aircraft must confront not only the existing air defense systems, but also the radar of the aircraft, including the fifth generation. That is, there are many requirements for materials - heat resistance, mechanical strength, absorption of radiation by enemy radars, low values ​​of thermal radiation. It is not yet known whether we possess such materials in principle, but if the development of a new generation of aircraft is already underway, then the issue with the materials for their construction also does not stand still.

Armament. Here you can quote Mikheev.

"These will be ultra-long hypersonic rockets capable of working on air, land and sea targets. They will undoubtedly use the principles of" free hunting and collective responsibility "- when a group of missiles, having reached remote enemy forces that need to be suppressed, independently choose the main and secondary targets and distributes them among themselves. "

Mikheev also mentioned absolutely exotic types of weapons, electromagnetic guns of the microwave range. According to the designers, these guns will be able to completely disable the electronic systems of the enemy aircraft. But this is already a matter of a very distant future, at least until the issue of the source of energy for these guns is resolved. To date, a fast and maneuverable fighter and a similar system are combined poorly.

Who specifically is working on the 6 generation fighter is, of course, not disclosed for many reasons. It can be assumed that this is the Sukhoi Design Bureau. In the KLA they say that Russian aircraft designers came to grips with the new theme immediately after the fifth generation T-50 fighter was practically made and the designers (that is, the Sukhoi Design Bureau) had time for new developments.

In the US, the sixth generation fighter makes the company "Boeing". Her project is called F / A-XX. It is assumed that this new 30-s will replace the deck fighters F / A-18E / F "Super Hornet".

For the first time, a prototype model was presented for review in 2009 year. It was then significantly reworked and shown in the 2013 year.

The glider is a "flying wing" without vertical tail. This option was adopted on the basis of the fact that the keel creates additional aerodynamic drag. Turn is carried out by small-sized rudders located on the wing. Apparently, during a straight flight, the rudders are removed and are released only when maneuvering.

About the type of engine is not reported. Most likely, turbojet. It, as well as on the fifth generation fighter jets, can provide supersonic cruising flight in non-landing mode. Maximum speed not specified. But probably hypersonic it will not.

Fighter double, with two engines. The version of the unmanned vehicle is also being worked out. The maximum take-off weight is declared at the level of 45 tons, range - 3000 km.

Last year, information began to come in about how the US military saw the car. Naval Operations Chief Jonathan Grinet said that the speed and secrecy of the aircraft were not a priority. Emphasis is placed on the target detection range and striking from long distances. Perhaps the fighter will be equipped with laser or electromagnetic weapons. But here is the same problem as the Russian developers: the power plant.

It should be recognized that no one has defined or announced a clear criteria for belonging to the sixth generation. But today, on the basis of those bits of information that come from designers and customers, it can be concluded that our and American aircraft of the new generation will vary greatly.