Flying power of the Navy: what is the naval aviation of Russia armed with 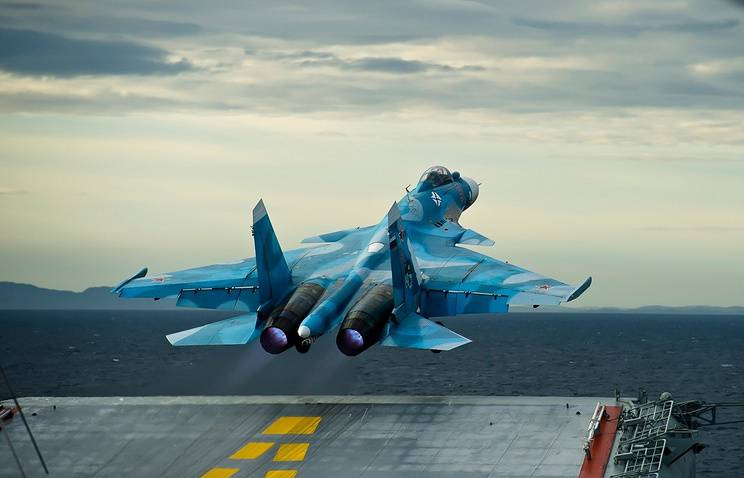 100 years since the first victory of Russian naval pilots during the First World War. July 17 (July 4, old style), 1916, four M-9 seaplanes from the Orlitsa Baltic carrier fleet defended against the German air raid the Russian naval base on the island of Saaremaa (now - the territory of Estonia). Two Kaiser planes were shot down, Russian hydroplanes returned without loss.

Marine aviation - the type of forces of the Russian Navy, designed to search and destroy the enemy, cover groups of ships and objects from air strikes, as well as to conduct air reconnaissance.

Naval aviation is functionally subdivided into several genera: naval missile-carrying, anti-submarine, fighter, reconnaissance and auxiliary. Depending on the location, it is conditionally divided into carrier-based and coast-based aircraft.

It is expected that in the near future attack helicopters Ka-52K Katran will be based on the cruiser. Projects of a promising aircraft carrier and universal amphibious assault ships are under development.

In service with coastal aviation of the Russian Navy: 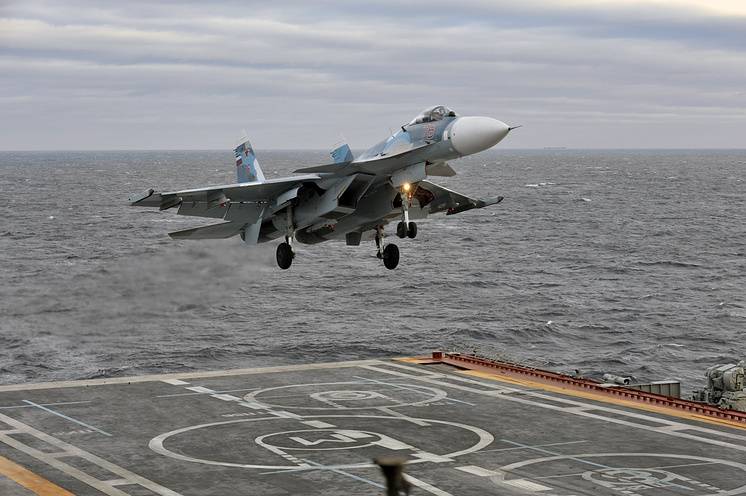 The fourth-generation Russian carrier-based fighter, developed for the Russian Navy at the Sukhoi Design Bureau under the leadership of Mikhail Petrovich Simonov, formerly known as Su-27K (according to the NATO codification: Flanker-D).

The first flight of the Su-27K took place on August 17 1987, and on November 1 1989, the Su-27K was the first in the USSR to take off and land on the aircraft carrying cruiser Admiral Kuznetsov.

Adopted on 31 August 1998, and since then has been the main carrier-based aircraft of the Russian Navy.

Of the 26 4 aircraft serial machines are lost in accidents. 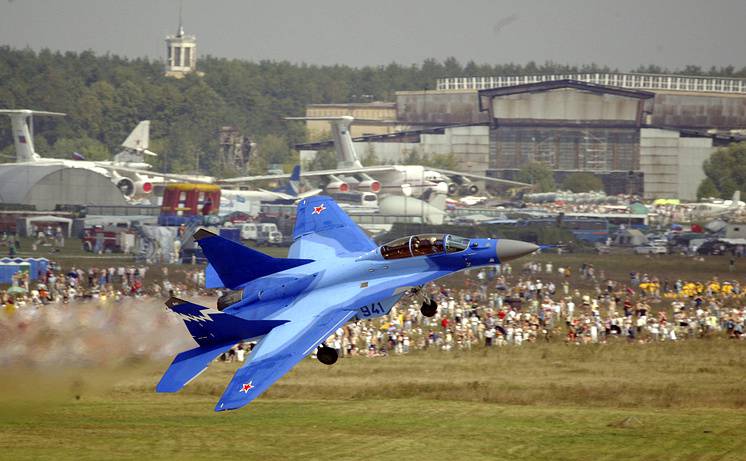 The fourth-generation Russian deck multipurpose fighter, a further development of the MiG-29 (according to NATO codification: Fulcrum-D).

Deck-based fighters are multifunctional weatherproof machines of the 4 ++ generation. Their task is to air defense and anti-ship defense of the connection of ships, striking attacks on ground targets of the enemy.

MiG-29K can be based on aircraft-carrying ships capable of receiving airplanes weighing more than 20 tons, equipped with a take-off springboard and landing arresting equipment, as well as at ground aerodromes.

It is planned that in the future the basis of the carrier-based fighter aircraft of Russia will be MiG-29K / KUB airplanes.

MiG-29K / KUB fighters were introduced to the ship's deck aviation regiment, serving on the Admiral Kuznetsov cruiser, not instead of its existing Su-33 and Su-25UTG, and in addition to them will be used in conjunction with them. 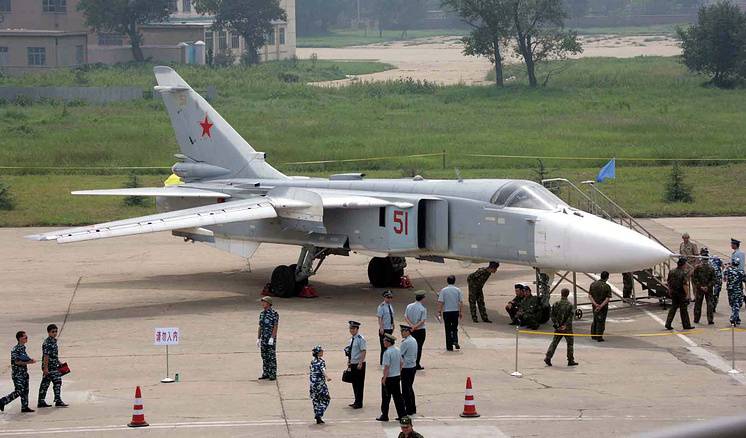 All-weather front-line bomber. It is intended for launching air strikes against ground and surface targets, including at low altitudes.

It was serially built in 1971-1993 in Komsomolsk-on-Amur and Novosibirsk. Total released about 1400 aircraft.

Armament - 23 mm caliber cannon, on 8 suspension points the aircraft can carry air-to-surface and air-to-air missiles, uncontrolled and corrected aerial bombs and projectiles, and removable cannons. On board can carry tactical nuclear bombs. 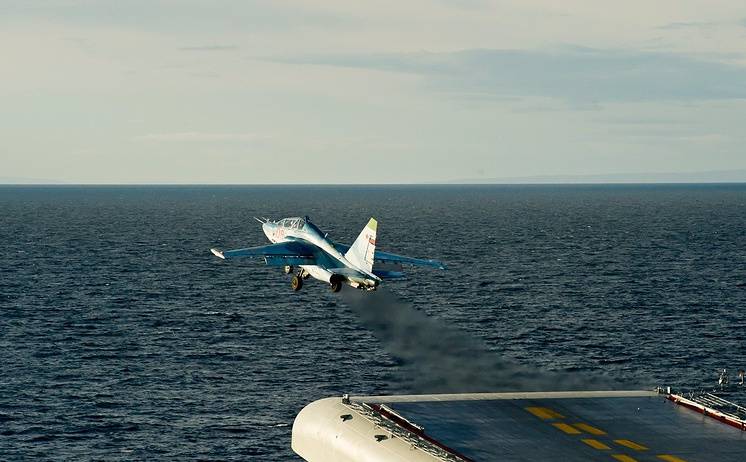 Training aircraft on the basis of combat training attack aircraft Su-25UB. Differs from it in the absence of sighting equipment, control system units weapons, a cannon installation with a cannon, girder holders and pylons, armored screens for engines, radio communication stations with ground forces, blocks and elements of the defense system.

It is in service in the 279-m shipboard fighter aviation regiment of the Northern Fleet aviation, as well as the mixed wing of the 859-th center for combat use and retraining of flight personnel in Yeisk. 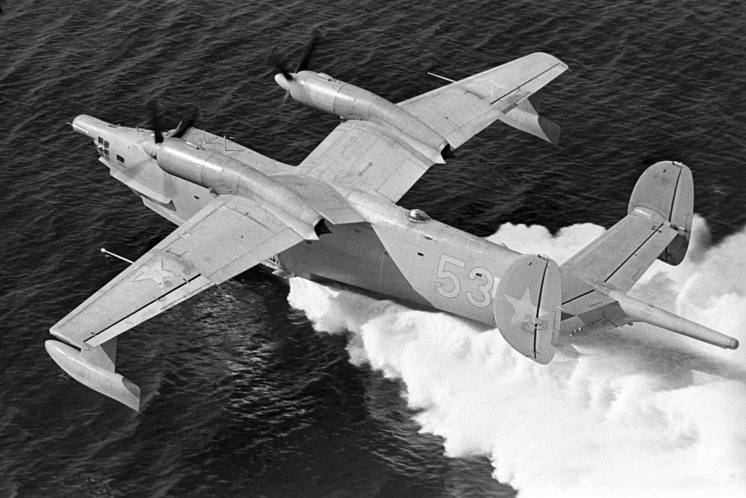 In October, 1960, the plane made its first flight, and from 1963, began to come into service with naval aviation. Established in the Design Bureau named after G. M. Beriev.

On the amphibian aircraft, a set of target equipment is installed, allowing to conduct search and combat with enemy submarines.

As of 2015, the naval aviation of the Russian Navy consists of X-NUMX aircraft Be-7. 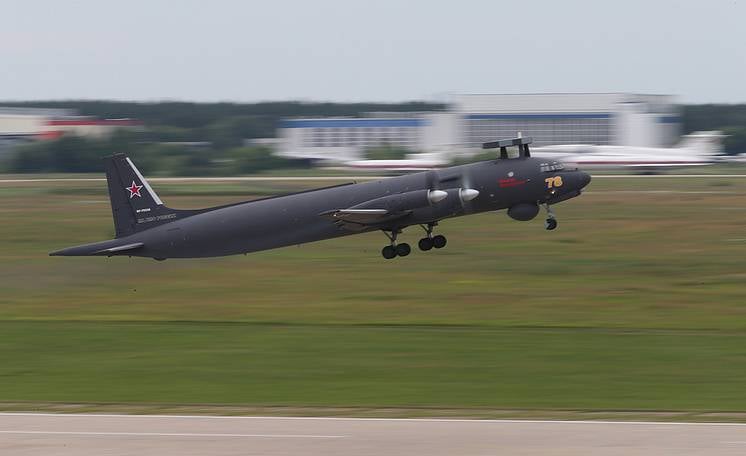 Anti-submarine aircraft developed at the S. Ilyushin Design Bureau on the basis of passenger Il-18В (according to NATO codification: May).

The aircraft is designed to independently or jointly with anti-submarine ships to search for and destroy submarines, naval reconnaissance, search and rescue operations, and minefield fencing.

In 2015, the Ilyushin Aviation Complex completed the contract for the repair and modernization of five IL-38 aircraft to the level of IL-38Н. 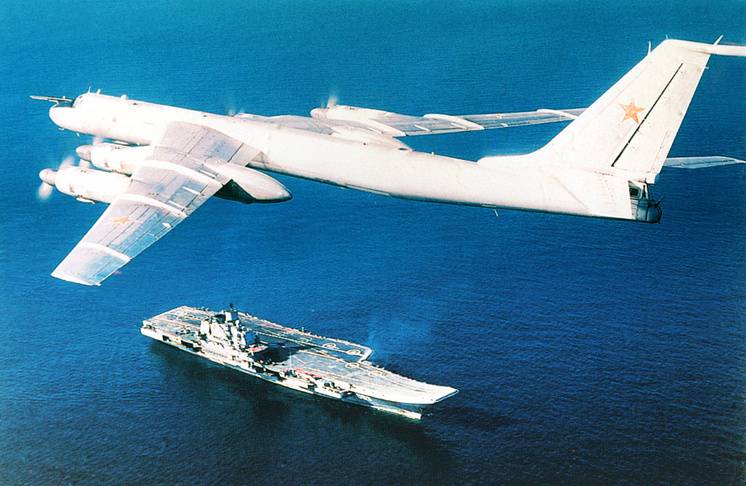 It is used for long-distance ocean intelligence, visual or radio engineering, for duty in the search and rescue service system, and only then, for searching and tracking nuclear-powered submarines with ballistic missiles.

For defense, a small-gun aft plant with two AM-23 or GSH-23L guns is used, as well as a set of radio countermeasures.

In service with the Russian Navy is one squadron in the Northern and Pacific Fleets.

In 2013, it became known that a new anti-submarine aircraft was being developed in Russia to replace the Tu-142М3. 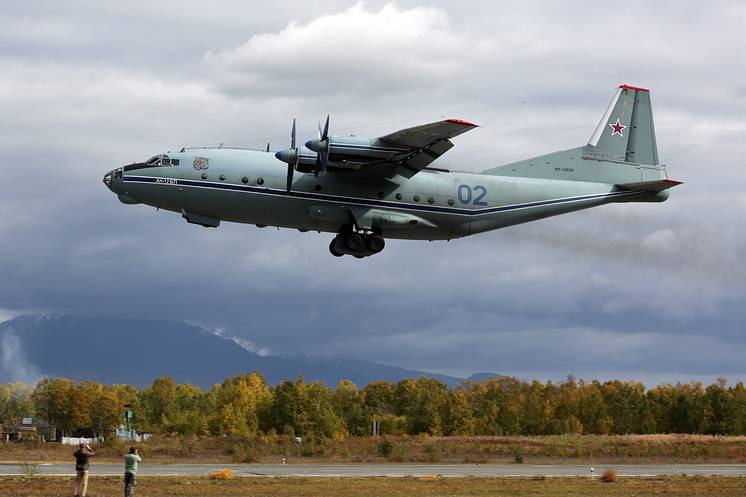 The first An-12 took off in Irkutsk 16 December 1957 of the year. The aircraft has established itself as a very reliable machine, able to work in difficult climatic conditions and unpretentious to maintain.

The aircraft was actively used for military purposes, in emergency situations, for the transfer of military equipment and personnel, also for passenger and cargo transportation, search and rescue of space objects, manned spacecraft crews and aircraft in distress.

The artillery armament of the aircraft consists of the PV-23U cannon armament, which includes a DB-65U aft tower with two X-NUMX-mm AM-23 cannons, an electrical tower control system and an sighting and computing unit.

In addition, it can carry high-explosive fragmentation or incendiary aerial bombs of 70 kg on board up to 100. 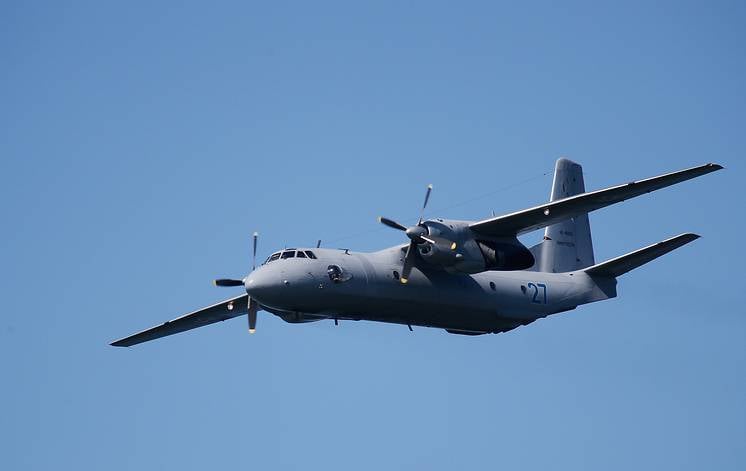 It is a modification of the original model An-24.

Aircraft crew - 6 man. Can carry on board 38 manpower or up to 30 paratroopers.

It can also be equipped with bombs caliber up to 500 kg. 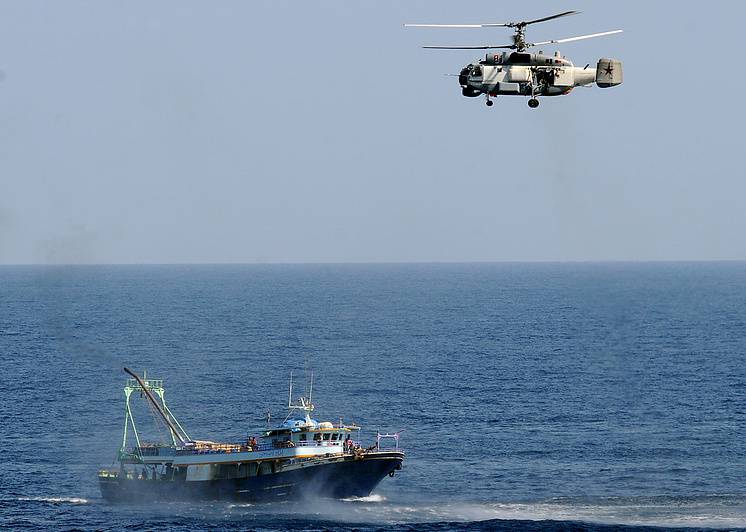 Designed to solve the problems of the antisubmarine defense of the fleet based on ships of various classes, including aircraft carriers.

The helicopter is capable of detecting modern underwater and surface targets, transmitting information about them to the ship and coastal tracking points, as well as attacking them with the use of onboard weapons.

To destroy submarines, anti-submarine torpedoes AT-1MB, APR-23 missiles and free-fall anti-submarine bombs of the PLN caliber 50 and 250 kg can be suspended from a helicopter.

A promising naval aviation helicopter, which is being developed to replace the multipurpose Ka-27, received the code "Lamprey". 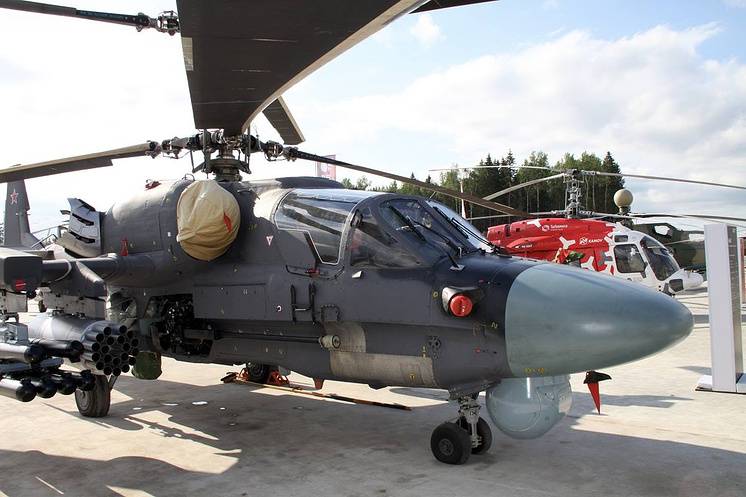 Ka-52 - multipurpose attack helicopter, is a modernization of the "Black Shark". Designed in Moscow by the design office of OJSC "Kamov".

Designed to destroy tanks, armored and unarmored military equipment, manpower and helicopters of the enemy in all weather conditions and at any time of the day.

It can provide fire support for the landing force, patrol and escort military convoys.
The first flight made 25 June 1997 of the year. Produced serially from 2008.

Equipped with a 30 mm caliber cannon, guided and unguided rockets up to 2 thousand kg on 4 suspension units.

According to Deputy Minister of Defense Yuri Borisov, Ka-52, who demonstrated his high combat qualities during the Syrian campaign, has a serious modernization potential.

In 2015, Russia signed a contract with Egypt for the supply of Ka-46 Alligator helicopters 52. Can also put the ship Ka-52K "Katran", designed for helicopter carriers such as "Mistral".