"Triumphal" anti-aircraft missile regiment deployed in Feodosia: on duty at the most unstable conventional theater of war 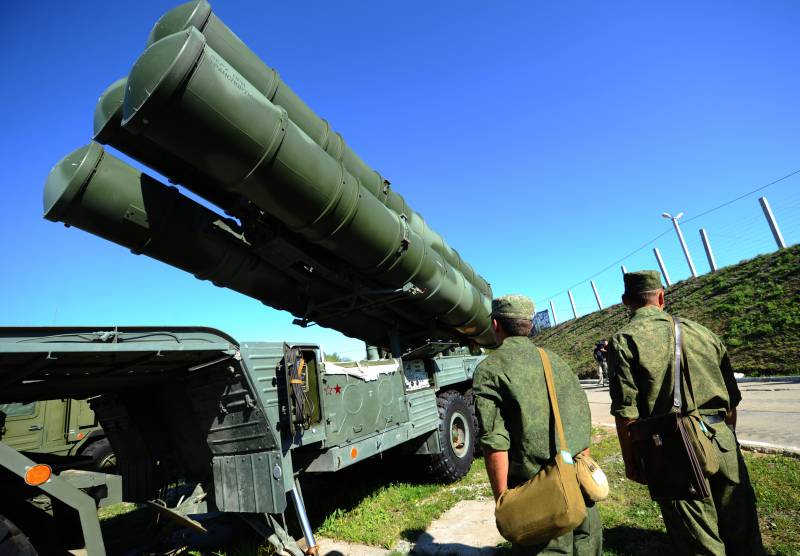 The focus of military-political tensions is daily shrinking more and more on the strategically important Black Sea region, which the USA and the entire North Atlantic Alliance are trying to maintain control over by any means. This region has become one of the main issues on the agenda of the recent Warsaw Summit of NATO, and is also regularly discussed as a priority positioning area for militarization at numerous “meetings” of the heads of the military departments of the European member states of the alliance. And the West is investing in this direction just billions of dollars.

One of the last News is the official commissioning of the American missile defense system of the regional missile defense "Aegis Ashore" near the Romanian city Deveselu (in the southern part of the country). As the main argument for deploying Ashor in Southeast Europe, the NATO command has always used the threat from the latest modifications of Iran’s medium-range ballistic missiles like Sajil-2 (range of 2500-3000 km), which can reach up to a regional military conflict American airbases in Romania, Italy, Germany and Poland. But the real goal of creating an advanced element of the missile defense position area in Romania hides much deeper and more far-reaching military-technical plans directed directly against Russia.

The range of RIM-161A and RIM-161B (SM-3 Block I / IA) interceptor missile interceptors used at sea and land modifications of Aegis is about 700 km, and the height of the interception is 500 km, which slightly affects the strategic efficiency of Russian ICBMs deployed in the central regions of the state, because over Eastern Europe the trajectories of most types of our ICBMs can exceed the interception ceiling of the Standards. But in the next few years, RIM-161D (SM-3 Block II) and more advanced SM-3 Block IIA / B will go to the nomenclature of the Ashorov antimissiles in Polish Redzikowo and Romanian Deleselu and their range can approach 1200 — 1500 km, and the height of the destruction of targets - to 1000 km, which will already pose a threat to the effectiveness of our strategic missile forces, when the trajectory of missiles will lie over Europe. This, 17 June 2016, was briefly announced by Vladimir Putin at a press conference at the St. Petersburg International Economic Forum. But ultra-long-range antimissiles are still “flowers”, since various programs for upgrading SM-2 / 3 missiles, implemented by Raytheon, provide for the development of ultra-long-range missiles to combat all types of aerodynamic over-horizon targets and even surface fixed and moving targets.

Based on the adopted missile RIM-174 SM-6 ERAM, with a range of 240 km and a maximum height of interception of up to 35 km. Opportunities to combat aviation and low-altitude cruise missiles are provided with an active radar seeker from an AIM-120C air-to-air missile. Similar to the RIM-161A / B / D family of anti-missiles, the RIM-174 has decent modernization potential, which allows to increase the range to 350 - 450 km due to the modernization of the marching combat stage engine. Moving along a semi-ballistic trajectory with a ceiling of 35 or more kilometers (the upper layers of the stratosphere), the modernized RIM-174 ERAM will very quickly reach the target due to the low deceleration coefficient, which is ideal for quickly intercepting distant aerial objects and hitting sea targets. These missiles are unified with standard UVPU Mk 41 ship and ground deployment. From the Romanian “Ashora,” their reach zone will cover almost the entire western part of the airspace over the Black Sea, which will undoubtedly complicate the operation of the Russian aerospace forces over the Black Sea, and Mk 41 can later “migrate” and closer to the Black Sea coast, which will pose a threat to the air courts over the Crimean territory, and in this case it is necessary to act in advance, i.e. today already.

In August, the 2016 of the Russian Ministry of Defense will begin the final stage of the formation of an unprecedented anti-aircraft and anti-missile "umbrella" in the airspace over the Republic of Crimea. According to a statement made by the deputy commander of the 18 GRP of the 31 Air Defense Division, Lieutenant Colonel Yevgeny Oleinikov, an anti-aircraft missile regiment of the C-400 Triumph complex will be deployed in Theodosia in August. The regiment will include at least 2-x divisions of anti-aircraft missile systems C-400, which will complement the C-300ПС / ПМ1 systems already in use by the Crimean group of VKS.

The "400th" will form over the Crimea insurmountable aerial borders in several operational directions at once. So, from the Ukrainian direction, protection will be provided from the Tochka-U and Elbrus OTRK, which are still in service with the Armed Forces of Ukraine, since the concentration and increase in the number of heavy weapons and the MLRS of the Ukrainian and mercenary formations on the Crimean-Ukrainian border indicates preparation for NATO-backed military aggression. Also, the 9М96Е2, 48Н6Х3 / ДМ attack and the long-range 40Н6 will be able to intercept the 5В55Р-type anti-aircraft missiles, which the Ukrainian C-300PS plans to use against our aircraft in the service of the attack, acting in the service. The minimum EPR of targets hit by Triumph is about 0,01 m 2, which allows it to work on many types of other anti-aircraft missiles and even MLRS missiles. And therefore, the complex will be able to withstand the improved ultra-long-range missiles of the Standard-3 and Standard-6 family, launched from American Ticonderoga-class missile cruisers, the Arleigh Burke destroyers and the Ajis Ashor ground complexes.

The base of the S-400 anti-aircraft missile regiment, for operational-tactical reasons, was chosen very competently. Feodosia is located at an altitude of 50 m above sea level. A multi-functional radar 92N6E on a universal mobile tower 40V6M rises another 20 m, which raises the firing antenna post 92N6E to 70 m above sea level. Due to this, the S-400 radio horizon along the JASSM-ER and BGM-20A / C / D Tomahawk waves flying at an altitude of 30-109 m above the crest is 45-48 km. And when using 9M96E2 missiles with ARGSN and external target designation - up to 70 - 80 km. The complex will be able to provide air defense for the Black Sea Kug fleet, allowing him to also effectively maneuver at distances up to 70 km from the southern coast of Crimea. But again, I note - only when using aircraft AWACS and other means of target designation of air-based.

Now about the possibilities of air defense from the tactical aviation of the enemy. The existing arsenal of 48H6Е3 missile systems (range over 250 km) from C-400 completely closes the airspace of the Crimea, part of the Black Sea, the entire Sea of ​​Azov (up to Mariupol), as well as the southern regions of Ukraine. Even if Kiev decides to use attack aircraft on the border with the Crimea, the remaining Ukrainian air forces Su-24, Su-25, MiG-29 and Su-27 will be destroyed over the Nikolaev, Kherson and Zaporozhye regions, and after a possible adaptation of 40X6E Dnipropetrovsk region. A no-fly zone can be introduced over all the southern regions of Ukraine, which will be supported by the super-maneuverable multipurpose Su-30CM fighter planes that are in service with the 43 naval assault air regiment (Avb Novofedorovka, under the town of Saki), as well as fighters of air superiority Su -27CM and Su-30М2 38-IAP in Belbek.

The C-400 regiment will be the backbone of the Crimean air defense in the southern and northern VN, and in the western and south-western VN its combat against low-altitude and medium-altitude targets will be slightly lower, since part of the airspace in front of Theodosia is overlapped by the Crimean mountains. In these directions, 9М96Е will be more appropriate than semi-active missiles. However, the 12 th anti-aircraft missile regiment C-300PM1, located in Sevastopol, copes well with the tasks of air defense of these areas.

The Black Sea region is today very unstable both from geopolitical and military-strategic points of view. This is beautifully illustrated by the events that took place on 15 on 16 in July during an attempted military coup in Turkey, especially since this attempt was not the first in Turkey stories and not the last. Considering that the country is in NATO, the consequences after the change of power may be completely unpredictable, depending on the personal financial interests of the new elite and the monetary "piece" that Washington can offer to the new Ottoman top in exchange for the transfer of promising types of high-tech tactical weapons closer to the Russian borders. Directly proportional to this development, the level of missile risk of the southern (Turkish) HE for the Crimean group of videoconferencing systems will rise sharply at once by several times. And in such a complex operational and strategic situation, for the early information awareness of the PBU anti-aircraft missile regiments of the "Three Hundreds" and "Four Hundreds", not only A-50U DRLOI aircraft may be needed, but also the most powerful multi-frequency radio engineering systems of meter, decimeter and centimeter ranges of work type "Sky-M".

The 55ХХNNXXМ “Sky-M” multipurpose mobile radar complex can be considered the only mobile radar complex that has the capabilities of a tactical missile attack warning station (SPRN). The most complex product of the Nizhny Novgorod Research Institute of Radio Engineering is represented by 6 high-potential radar modules - antenna posts with AFAR: RLM-M (meter range), RLM-D (decimeter range) and RLM-S (centimeter range); they provide detection of any types of aerodynamic and ballistic targets, as well as their support on the aisle (“trail set-up”) with speeds up to 3 m / s. The centimeter module, apparently, has the hardware capability of capturing targets for accurate auto tracking, and therefore, lighting for SAMs with radio command, semi-active and active methods of radar guidance, which makes the 5000ЖХNNXМ a multi-purpose complex capable of expanding the capabilities of anti-aircraft missile batteries. 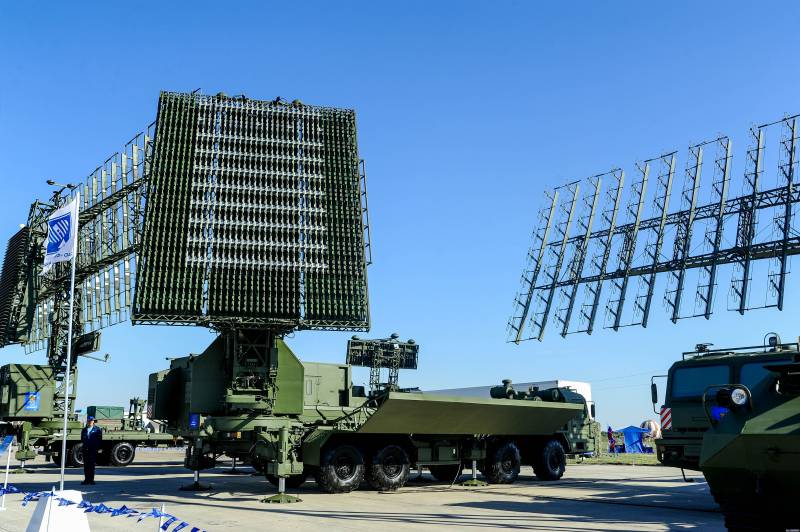 When the conventional theater of operations is replete with hypersonic high-precision weapons and EW, the work of the C-300 / 400 anti-aircraft missile systems must be supported by multi-purpose sky-M radar systems. The photo meter (RLM-M) and decimeter (RLM-D) antenna modules of the complex, also having the ability to maintain a passive X-EMU at distances up to 500 km

Modules of different ranges increase the noise immunity of the complex, as well as long-range capabilities due to less energy loss of longer and lower frequency m / dm waves in space. Targets with an ESR over 2 m2 can be detected at a distance of up to 1800 km and altitudes up to 1200 km. Turkish YBR-III SRBM (900 km range) will be illuminated at the MFIs of Nebo-M operators immediately after launch from central Turkey. The complex is much more advanced than products such as "Sky-U" or "Enemy-G", in addition to better noise immunity and permission to work with small-sized stealth objects, the new complex also has a sector mode of aerospace viewing, reaching 80 degrees elevation angle and 90 degrees in azimuth, which surpasses such masterpieces of radio electronics as radar program review 9С19М2 "Ginger" of the C-300B / VM complex. The number of accompanied targets by means of "Sky-M" is 200 units (for aerodynamic) and 20 (for ballistic).

The integration of Neba-M into the aerospace defense system of such a strategically important region as the Republic of Crimea, in the shortest possible time, without having to wait for the construction of such facilities as Voronezh-DM, will provide air defense calculations with early and detailed information about the air situation in within one and a half thousand kilometers from the peninsula, giving enough time to develop a method for intercepting enemy EAS.