Dig into the ground 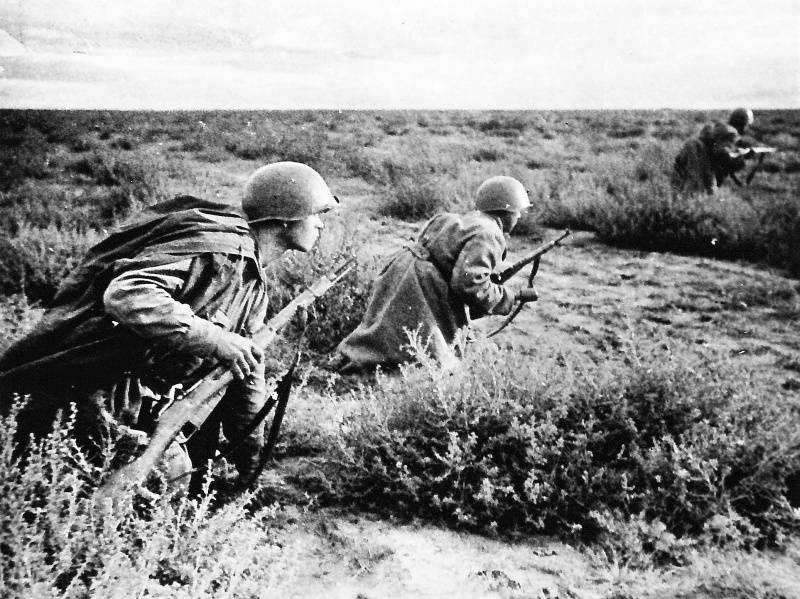 During the Great Patriotic War, combat areas along with fortified areas played an important role in the defensive battles of the Red Army. In the militaryhistorical literature there are descriptions of the fighting of the Red Army in Gomel, Kiev, Balaklava, Luga, Tula, Rostov, Taganrog and other military areas.

At the initial stage of World War II (22 June 1941 of the year - 18 of November 1942 of the year), the field defensive areas of the Red Army were widespread. They occupied along the front from 50 to 100 and more than a kilometer of defensive line and were located in line battalion defense areas with strong engineering and technical support in the form of escarpes, anti-tank ditches, wire and nadolbovyh obstacles, minefields of the combined type, dots, bunkers, armored caps , shelters (dugouts, dugouts), trenches and rifle cells, connected by communications. The Rostov defensive area (hereinafter referred to as POD) was also among those field lines.

The length of 155 kilometers along the front and 20-30 kilometers covered the area on the right bank of the Don River, ringing two cities from the north-east, north and west - Rostov-on-Don and Novocherkassk. Natural features should be noted: a large part of the ROR was a steppe hilly area with elevations in 80-120 meters, cut by river valleys, ravines, ravines with a small number of artificial plantations (groves, forest belts, collective farm gardens), which sometimes made it difficult to shelter and camouflaging troops and equipment from ground and air surveillance, as well as made it difficult to maneuver during combat operations. With the exception of the cities of Rostov and Novocherkassk, the remaining settlements (stanitsa, villages and farms) were located in hollows, ravines and river valleys. So residents were hiding from the prevailing winds. But such an arrangement made it difficult to turn villages and farms into defensive strongholds, since from the surrounding heights they were viewed and swept through.

The scarcity of low-water springs and poor-quality water in the rivers Krivoi, Tuzlovo, Donskoy Chulek created the problem of supplying troops with drinking water in summer at temperatures up to + 35, + 40 ° С.

Roads in dry weather provided maneuver with troops and equipment from the depths of the POP and along the front to any of the attacked areas in the dark, and during the day under cover aviation and air defense systems.

The Rostov defensive area began to be created in the autumn of 1941 by engineering and sapper units and units of the North Caucasian Military District with a broad involvement of the civilian population of the city and region. Thanks to such widespread use of the population, the troops of the 56-th Separate Army received well-fortified positions and were able to use this line for repelling the German attack on Rostov for the month from October 20 to November 20. 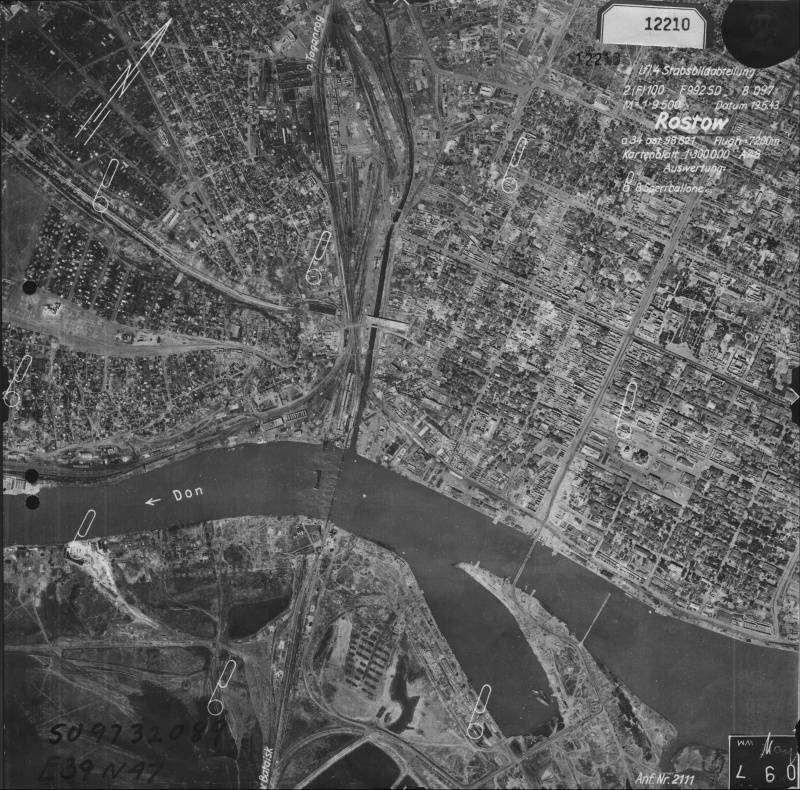 The Germans suffered significant losses and were forced to introduce new formations from November 23 to 29, 1941, in particular, the third motorized corps of the 1st tank army of the Wehrmacht. 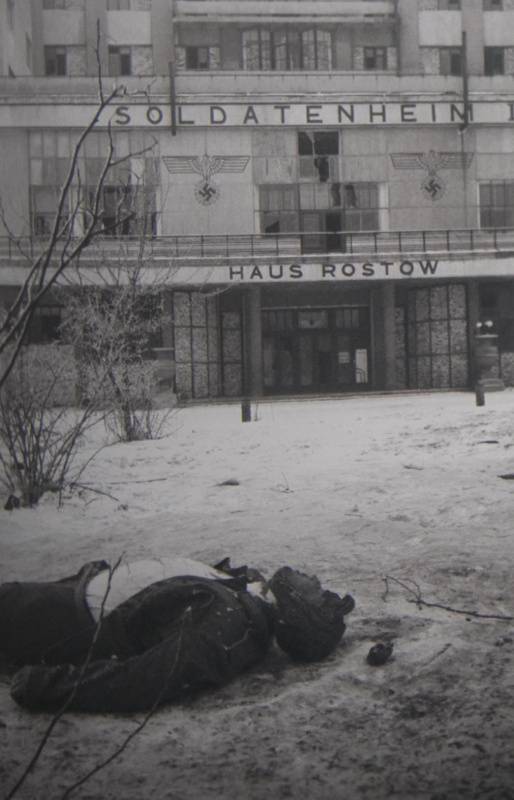 The Soviet units were able to return Rostov under their control and begin a new stage of defense, the creation of which was proceeding with great difficulty.

The restoration of the defensive structures destroyed during the battles of the Rostov bypass after the liberation of the city of November 29 was virtually no matter, despite the proximity of the front. This caused alarm in Moscow.

During February-June 1942, anti-tank ditches and escarpments were restored at the turn of “G”, the lines A and Zylova were opened and equipped with ditches and escarpments, installed and concreted over 80 pillboxes. The second echelon forces and reserve units and formations at the same time equipped the battalion defense areas for field filling with troops.

The main position of the Rostov fortified area began on the Don bank near the Nizhny Zhuk farm, went to the Krivyanskaya village, went around Novocherkassk outskirts from the east and from the north along the Mokra Kadamovka river, then along the right bank of the Tuzlov river, front to the north, through the Tatar, Grushevsky, Kamenny Brod hamlets Nesvetai, north of Generals.

From the southern outskirts of the village of Generalsky, the main position sharply turned to the south, along the eastern slopes of the Kamennaya and Don Chulek beams, along the western outskirts of Khapra station to the Dead Donets River. This position was called the “G” line and was equipped with an anti-tank ditch and scarp across the entire strip, covered with wire barriers, anti-tank and anti-personnel minefields, trenches and single trenches, main and spare firing positions for anti-tank guns, mortars and machine guns, and IO, IOT. and armored dots, observation and command posts, shelters for personnel (dugouts, dugouts) as part of platoon and company strong points in the battalion system Yonov Defense a total depth of up to 47-3 km.

The second defensive line (line "A") was located in 5-12 km east and south of the line "G" and passed from the Alexandrovka junction on the Aksay river through Rakovka, along the Kamyshevakha beam to the village of Krasny Krym, then, through the height 86,9, along the eastern slopes Chaltyr beams to the eastern outskirts of Kalinin Farm. Frontier A was also equipped with an anti-tank ditch and escarpments, covered with a wire fence, ridges, land mines, anti-tank and anti-personnel minefields, and 25 reinforced concrete pillboxes.

From the eastern outskirts of the village of Aksay, through the village of Myasnikan and Leninov, the village of Semernikovo, passed the rear defensive line, also equipped with escarpments and anti-tank ditch, land mines, combined minefields and 13 reinforced concrete pillboxes.

The fourth (urban) defensive perimeter was built on three urban suburbs, in the east, north and west. He had a solid anti-tank ditch, wire and mine-explosive barriers, racks and barricades on the main thoroughfares.

By 20 July 1942, two defensive lines - the “G” and “A” boundaries - were occupied by special formations: the 70 and 158 -m fortified areas (hereinafter referred to as “Ur”) in the 12 separate machine-gun and artillery battalions (opub), 6 individual flamethrower-trench mouth and 2 mouth communications total in 8878 fighters and commanders.

With the forces of 371, 372, 374 of the machine gun and artillery battalions and the 158 of a separate flame thrower company, he occupied the line “G” from the northern outskirts of Novocherkassk to the Serdyukov farm.

The 6, 9, and 10 machine-gun artillery battalions occupied the “A” line from the Aleksandrovsky junction to the Trud farm (height 86,9). The left frontier ran along the stanitsa of Aksayskaya, the kurgan in 2 km west of Shchepkin’s farmstead, Serdyukov’s and Petrovsky’s farmsteads.

The 158 th fortified area (commander - lieutenant colonel P.V. Kosonogov, chief of staff - colonel D.I. Rybin) defended the western sector of the POR. Forces 373, 375, 376, 377, 378-of machine-gun and artillery battalions, 80, 81, 82-rd and 83-th individual trench-flamethrower mouth, he served abroad "G" in the band from the village Serdyukov to the western edge of Hapry station. The 15-th separate machine-gun and artillery battalion occupied the “A” line, intercepting the Rostov-on-Don – Taganrog railroad and highway.

In order to have at least a small understanding of the anti-tank obstacles of the 56 Army, you need to imagine seven anti-tank ditches, 16 kilometers of escarpes and minefields. It has been installed near 73 000 anti-tank mines.

And before the very leading edge of the main defense line, a wire fence, 40 kilometers in length, was erected, more than 43 000 anti-personnel mines were also installed in this area. At the intermediate army defensive turn, about 5 kilometers of anti-tank ditches were dug.

The width of the army defense strip was 93 km, the total defense depth was 15-23 km. The army headquarters for 20 July was located in the adit of the northern bank of the Temernik river, in the settlement of the Quarry, on the northern outskirts of Rostov-on-Don.

To the forefront of the Rostov defensive area, the German units simultaneously emerged from three sides: from the west, north, and northeast. That was the evening of July 21. The front lines of the German 17 th field and 1 th tank armies of Army Group A, which were opposed on this sector of the 12, 18, 37 and 56-I armies of the Southern Front, were still frozen in front of the Soviet line of defense.

For the decisive assault on Rostov-on-Don, the command of Army Group A concentrated up to 17 divisions with reinforcement units, over 200 thousands of soldiers and officers, about 500 tanks and self-propelled artillery installations, up to 3500 guns and mortars. 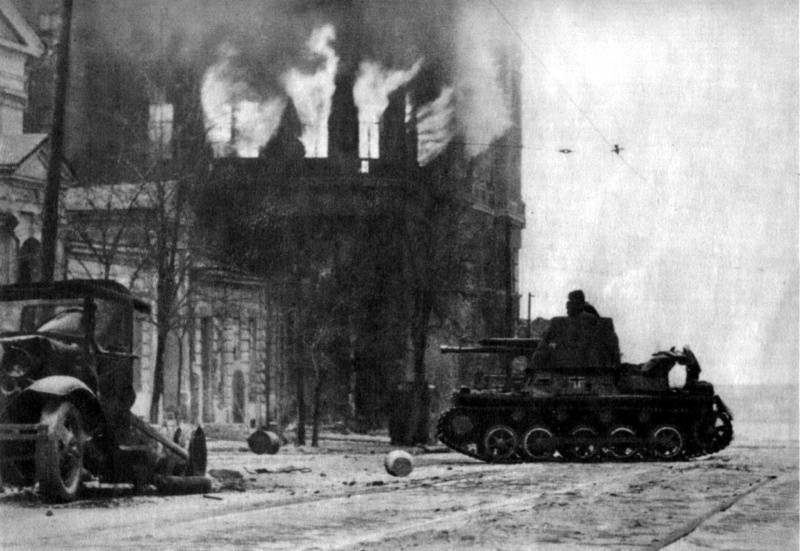 During the evening and the night from 21 to 22 in July, the Germans, in small groups of infantry and tanks, “probed” the front edge of the defense of the 56 Army, fired artillery and mortar batteries. Enemy sappers made passages in the minefields of the “G” defense line of the Rostov defensive line, undermined the slopes of the escarpes and anti-tank ditches, preparing passages for tanks.

The Soviet 56 Army at dawn 22 July occupied the line "G" of defense along with seven machine gun and artillery battalions of the 70-st. Fortification.

From 6 in the morning to the position of the 76 th naval rifle brigade from the line of Generalskoye-Aleksandrovka in the direction of the village of Sultan-Saly launched an offensive of the enemy's 57 tank corps to 200 tanks with motorized infantry. Having broken through the front at the junction of the 76 Brigade and the 30 of the Irkutsk-Chongar Rifle Division, by 9 hours of the morning 50 enemy tanks and a motorized infantry regiment captured the village of Red Crimea. By 10 hours around 70 German tanks broke through the road from the village of Generalskoye to Sultan-Saly.

The Germans were also able to launch simultaneously another offensive in the area of ​​the state farm Inter-Road and Kamennaya Girder, at the junction of the 376-th and 373-th individual machine-gun battalions (it was the 158-st. Fortified). At exactly six o'clock in the morning, one by one, around 150, German tanks were able to bypass an anti-tank ditch, whose walls were blown up by fascist sappers.
Two hours later, approximately at 8 hours of the morning, Soviet DOTs and gun platforms near 100 tanks opened fire at direct fire.

All these actions were supported by Germans from the air - the Yu-87 bombers one by one dropped their bombs on the position.

Despite these fierce attacks, they were repulsed. The first and then the second and third tank attacks were repelled. During this battle, the German tank 32 and 15 vehicles with infantry were hit.

Then the enemy subjected the line of defense to heavy bombing from the air and artillery and mortar shelling. At 9 hours 30 minutes over 60 enemy tanks, ironing the line of defense of the 339th Rostov Rifle Division, they moved towards Rostov. Thus began the second page in the military history of the city.