Having exhausted the arguments about the Russian threat, the Germans began to frighten each other with the Russian mafia. 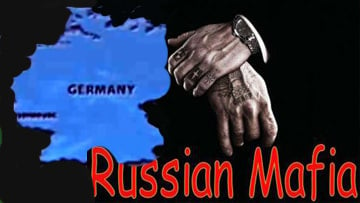 A recent NATO summit in Warsaw summed up a months-long propaganda marathon about the Russian military threat to Europe. Now decisions have been made, the West has mobilized to fight Russia. However, the aggressive tone of European society, for the most part not conducive to confrontation with Russia, must somehow be supported. An old horror story about the “Russian mafia” went into action. This was what the German media did in the week.


How Welt am Sonntag Excited Colleagues

Last Monday, dozens of German publications published materials on crimes committed in Germany by immigrants from the former Soviet republics. The headline “Russian mafia conquers Germany” became the most popular that day. The reason for such an organized propaganda attack was the interview of the Director of the Federal Criminal Affairs Office (BKA) Holger Münch Sunday newspaper Welt am Sonntag.

On the pages of the Berlin weekly Münch, he stated that "Russian-Eurasian organized crime is growing very rapidly in Germany and is expanding to the West." According to the estimates of the head of the All-Russian Aviation Agency, the annual damage from criminal actions of such gangs amounts to several billion euros. Münch did not give exact figures, as well as the state and nationality of the criminals.

There was a couple of vague ratings in his interview. For example, speaking of the “thieves in law” that had penetrated into Germany (Münch estimated their number at 20-40 thousand people), the director of the GCA, apart from Russians, also named Abkhazians, Georgians, immigrants from the Caucasus and Turkmen. As an illustration of the criminal activity of the "Russian mafia", Holger Munch told history Georgian thieves. Thanks to shoplifting, his daily income averaged 500 euros. Such is the "thief in law."

By juggling such loud phrases, Munch did not, in fact, cite any convincing examples of the activities of Russian organized crime in Germany. It is unlikely that the abuse of a Berlin-based care company for old people, which the police uncovered in April of this year, does not fit this criterion. She then arrested the Russian-speaking owner of the company, opened criminal cases on her assistants.

The Berlin newspapers around this story made a lot of noise. The “Russian Mafia” map was played in full. In fact, frauds in the calculations with the sickness funds (this was exactly what our former compatriot was caught with) is a fairly common phenomenon in Germany.

As Stefan von Dassel explained to the Deutsche Welle publication from the mayor’s office in the Mitte district of Berlin, there are quite a few such care companies. They are not related to each other, and the police do not find abuses in the calculations for the first time. Nevertheless, only the Russian-speaking owner of the company who stole was taken to the “mafia” and made her business resonant.


Another example of the organized criminal activity of the "Russian mafia" German media called theft from shops that are widespread in Germany. Here's how the Deutsche Welle correspondent writes about this: “If, for example, a lady looked after herself with a very definite handbag from Chanel, a strap from Louis Vuitton or a scarf from Hermes, but there isn’t enough money, you can let know who needs it , and the thing stolen by request will get at half price, and even cheaper. ”

After such revelations, it is fitting for all owners of luxury accessories to be suspected of having links with the “Russian mafia”. However, it is not so “Russian” either. In this store business and burglaries more come from sunny Georgia. According to criminal statistics, the share of Georgians among migrants (in relative figures) is the largest in these types of crimes - 4,2 percent.

The Germans admit that their apartments and shops are most often robbed by Serbs and Albanians. However, the total number of representatives of these ethnic groups in Germany is much higher. It turns out that the percentage of crooks among Georgians is incomparably greater than among other national diasporas.

This is the assessment of the Germans. They attributed to the "Russian mafia" not only Georgians. Here are the official statistics for the last year of the Federal Department of Germany in criminal matters: “Citizens of the Russian Federation committed 13235 crimes, Ukrainians 8235, Georgians 8085, Lithuanians 5064, Armenians 3191, Latvians 2796, Moldovans 2187, Azeris 2054, Belarusians 1213, citizens of other post-Soviet countries - within five hundred. " Hello "Russian mafia"!

It should be added to this that the Georgians, who are in third place in this shameful list, are ranked by German statistics to eighth place among 10 countries, migrants of which most often commit crimes. The German media are modestly silent about the top five ethnic groups, which is certainly ahead of the post-Soviet list.

In the criminal chronicle, messages about migrants, ganged up in biker gangs, drug dealers, bootleggers, smugglers, dealers in human organs and groups earning the movement of illegal migrants, flash. This criminal series is rarely associated with specific countries and ethnic groups. Is that the Italian mafia is not forgotten. But the German media see a threat to their society, first of all, from the Russian mafia.


Why blow mold away from old horror stories

Usually, the shaft of publications about the "Russian mafia" happens after some high-profile crime. So it was in March, when 15 numbers in the morning traffic in the center of Berlin on the Bismarck-Strasse, a Volkswagen car exploded. The driver of the car was the victim of the explosion. The police rashly suggested the terrorist attack. Then she said that the driver of the Volkswagen was the victim of a criminal showdown between criminals from the former USSR.

The German press then gave vent to its emotions, fantasies, easily played with real facts and convinced itself of the growing danger of the “Russian mafia” for respectable Germany.

The topic was soon turned off. It turned out that in Volkswagen an 43-year-old Turkish citizen associated with drug trafficking had died. The German media easily switched to the “military threat” coming from Russia - they were preparing for the July NATO summit in Warsaw.

This time there is no formal reason for the new Russophobic campaign. It is impossible because the confused and poorly reasoned arguments of the director of the criminal affairs department, Holger Münch, in an interview with Welt am Sonntag are seriously considered the basis for such a powerful propaganda attack.

What made the German media return to their old favorite horror story about the “Russian mafia”? It seems that the reason should be sought in the outcome of the already mentioned NATO summit in Warsaw. The anti-Russian course of the alliance demanded an increase in its funding. Many European countries will have to strain their budgets. Germany is no exception.

Meanwhile, public opinion polls conducted before the summit showed that Europeans are not eager to quarrel with Russia. This conclusion was made, for example, by sociologists of the American Research Center PewResearch Center.

According to their data, 69% of Greeks, 55% of Swedes, 53% of French, 52% of Italians, 52% of Hungarians and 50% of Germans reject the anti-Russian policy of European elites. On the other hand, 90% of Greeks, 67% of Hungarians, more than half of Germans and Italians spoke in favor of strengthening ties with Moscow.

Do not take into account these moods of power can not. Therefore, it took them a new course of propaganda treatment of society in order to raise the degree of Russophobia on the continent. The first shot the Germans. The topic was taken painful for people - growing crime among migrants. Guilty, as we see, they appointed everyone arbitrarily united in the “Russian mafia”.

The WCA statistics for this public include the Russian-speaking 5000 criminals, which are currently being held in German prisons. There is no point in defending and justifying their actions. But even less, the shadow of a handful of criminal characters throwing a whole country. However, in the absence of other arguments, propagandists from the German media have to use such methods. Anyway, at stake is the task of holding back the development of Russia. For this, all means are good ...