Is there a chance for a project economy in Russia?

July 18 2016
268
Behind the series of truly resonant events of the past week - in France and Turkey, and Armenia, too, a few in the shadow remained an important internal Russian event - a meeting of the Presidential Council on Strategic Development and Priority Projects. The Council itself is a new structure for modern Russia, the creation of which became known during the International Economic Forum in St. Petersburg. The statement that the Council on Strategic Development and Priority Projects (CEPA) is starting to work was made by President Vladimir Putin himself.


Is the significance of such an event as the beginning of the work of the SCEP? In fact, the significance is difficult to overestimate, since, in essence, a body is being created to become a think tank for finding ideas and solutions related to the modernization of the Russian economy. The significance of the event is also great because the duties of the representatives of the Council include work related to making decisions to improve the situation in the social sphere, which, of course, is directly related to the economic sphere.

Press office Kremlin leads President Vladimir Putin’s statement:
For each direction, priority projects should be formulated and launched. The Council will set tasks, determine ways to solve them and monitor the progress of projects.

The work ahead should be nationwide. It must involve experts, entrepreneurs, civil society activists. That is why today I asked you to gather here to talk about it, and earlier I asked my colleagues to form a composition in such a way that it would include representatives from business associations and the Public Chamber. 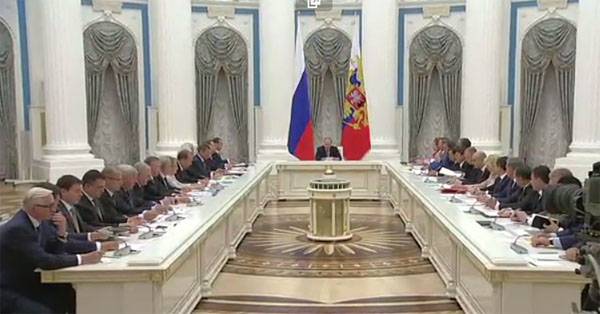 So, the Russian president decided to create a platform that can and should accumulate the most sensible ideas for the economic development of the country. At the same time, Vladimir Putin notes that this platform should not be in the nature of a “cozy small party” - a circle of people whose expertise is so great from their personal point of view that they do not take into account other points of view on economic issues in the country definition. Under the conditions of obvious economic problems that the Russian economy is facing, working in the mode of “narrow small parties”, which are collected almost exclusively from HSE students, is, as they say in diplomatic circles, counterproductive. What kind of project economics can we talk about if all major projects in such “circles of interest” are stably reduced to a single formula — nothing but active investments in green candy wrappers and filling a reserve nugget. A reserve nugget is certainly not a bad thing - a “black day stash” will never be superfluous, but it is not necessary to bring matters to an absurdity. And the absurdity is most often associated with the fact that the role of the egg capsules was put (put) by individual economic gurus above any of the strategically important roles associated with the development of the real sector of the economy. They say that it is necessary to save money in any case, but the defense industry, the construction sphere, science and education, and medicine can wait. So many years have waited that in some areas almost to the death of entire industries ...

With such “expert” logic, Russia has been living in recent years, expecting not breakthrough solutions in reforming the economy, but, trivially, the next stage in the rise in oil prices.

Now, it seems, the president himself pays attention to the fact that “it is impossible to live like this”, and that it is the project economy that, using the most diverse tools, can become a new reality in the country. Allocation of priority projects with their financing and putting them in the mode of either earning a profit or servicing the most important social issues is exactly the task that the Presidential Council, by definition, is obliged to solve.

That's all seemingly good. Everything seems to be great. However, there are some nuances that make one fear for the effectiveness of the Council’s work on strategic development and priority projects. For example, leadership presidium SSRPP. About who will head the presidency, said Vladimir Putin himself:
The Council Presidium will be headed by Dmitry Anatolyevich Medvedev, Chairman of the Government of the Russian Federation.

On the one hand, okay, although not Anatoly Borisovich Chubais. But on the other hand ... This is, after all, that same Dmitry Anatolyevich Medvedev, under the vigilant vigil of which a considerable number of fairly promising projects were eventually bureaucratic beyond the limits. This is the same Dmitry Anatolyevich, who, as if initiating raising the minimum wage bar on 20 with extra percent, immediately declares that it is impossible to raise pensions even by 4% and in addition calls for it or here (for Dmitry Anatolyevich it is not important) to keep ...

It is, of course, understandable - the appointment of Dmitry Medvedev as the head of the Presidium of the SSRUP under the President of the Russian Federation allows at least to know the name of someone who would be responsible if something goes wrong. But, on the other hand, is not such an appointment an advance signal from the state to the fact that there is no need to pin high hopes on the Council. They say it will work as it can - and that’s fine ...

At the same time, it is clear that Dmitry Medvedev is being given a new chance to demonstrate not only the ability to use Apple devices and microblogging ... On the eve of the elections, and Medvedev is the chairman of the parliamentary majority party, such a chance means a lot. For example, the fact that the party, which brought together the entire modern nomenclature, having added the staff to the directors of secondary schools, the chief physicians of regional hospitals, singers and TV presenters, is not so much a self-controlled colossus as a real political force capable of taking responsibility for failures too. Although how many such chances have already been given ... With the realization of chances today, it seems that only the players of the Russian national team are worse off ...

However, running ahead with the findings is also useless. The Council was created, the first meeting was held, the range of goals and objectives is indicated, the President voiced the issue of increasing responsibility in the framework of the work. If expert groups with different views and approaches to economics are really allowed to work, and if the mechanism starts to work, then it will be possible to see the uninitiated person in the near future. But if the entire work of the Council on creating a project economy segment is habitual for similar structures, it will result in no more than paper reports, then it will be possible to put a tick in front of another promising project, which is derailed.

Ctrl Enter
Noticed oshЫbku Highlight text and press. Ctrl + Enter
We are
Day of the Armenian army. How the armed forces of Armenia were formed and developedEngineering Technologies-2012. The first days of the forum
Military Reviewin Yandex News
Military Reviewin Google News
268 comments
Information
Dear reader, to leave comments on the publication, you must sign in.