July 22 2016
24
The three previous materials have caused a number of questions, which are partly an attempt to answer here. Many were interested in the reason for the change. Like, what these knights lacked? However, it is obvious that both “white” and “colored” armor from solid-forged plates, and horse armor appeared precisely because they could protect both the rider himself and also his horse from the improved throwing weaponswhose role is constantly growing. For example, in 1465, during the battle of Montleury, 38400 arrows were fired in just one day! For one! Siege Willie lasted less than a month, and during this time 10200 arrows and 1500 crossbow bolts were spent, while during the siege of Dinant lasting a week, the army of Burgundians launched 27840 arrows on the enemy, and in addition 1780 bolts, which indicates the impressive scale of their use and about the well-established process of their production, which has taken just industrial scale! David Nicole wrote, in particular, that the production of 100000 crossbow arrows required ten dry birch trunks and about 250 kg of iron. And after all they had to be cut down, delivered, sawn, forged tips for them and ... pull the feathers out of the geese! 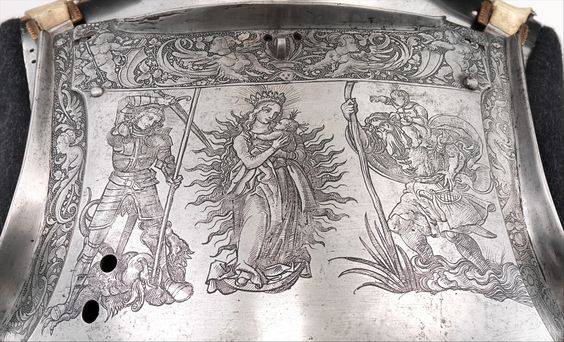 But if the data on the numbers of arrows consumed today is well known, then the question of the time when very heavy steel crossbows began to be used (which in turn became the answer to the “white armor”) is still controversial, although it is believed they could be used in combat already in 1370 year. A bow made of steel made the crossbow more compact, and made it possible to reduce the length of the bowstring tension only to 10 - 15, see. Nevertheless, charging it, as before, was a slow affair, and its design became more complicated. The early stirrup, the “goat’s foot”, the manual block with the tension hook and the double crank — all this was simpler than the so-called “pinwheel” or “Nuremberg gate”. So it is obvious that almost immediately after the “white” armor, and then the “colored” armor, more powerful long-range weapons immediately appeared. And the decoration itself only emphasized the high quality of the armor itself - they say, they are not only outwardly spectacular, but also well protected. Although there were already strictly ceremonial armor, exclusively for beauty. 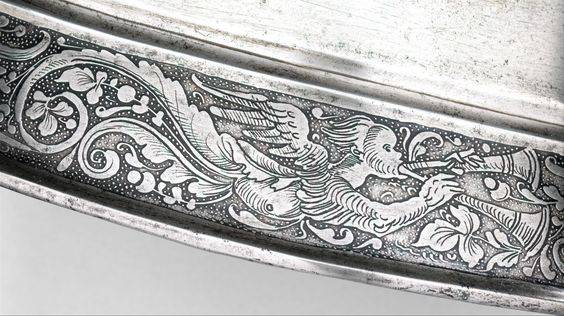 Border cuirass of a landsknecht from the Metropolitan Museum

In order to shoot at smooth metal armor, new arrowheads were also needed. So, the tips, which have a leaf-shaped form, completely corresponding to their purpose in the twelfth century and even in the middle of the thirteenth century, were used now except for hunting. Only on the ships did the arrows still use moonlike blades, but only because they allowed cutting the tackles on the ships. In the fourteenth and fifteenth centuries. the main thing was a styloid tip, supplemented by three or four blades, capable of piercing metal armor. The English historian Michael Nicholas wrote about them that they were not specifically fixed firmly on the shaft of the arrow and, hitting the target, usually remained in the wound. He refers to the data of modern experiments, which confirmed that the effect of hitting such arrows at a distance of a direct shot was very significant. But when shooting at a great distance, the arrows fell on the riders from above and at an angle, so the knight had only to tilt the torso forward a little, so that they would just bounce off his helmet and on the shoulder pads of the armor. Another thing is that with such a “rain of arrows” the head, neck and croup of a horse turned out to be vulnerable, which is why they also began to be protected with plate armor. 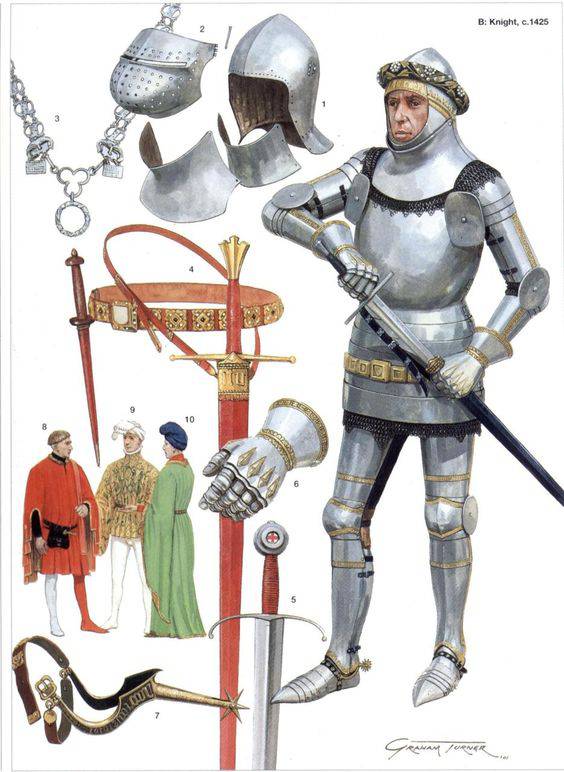 Typical knight of the war of scarlet and white roses. Large bascinet with buvier (chin) and “necklace” (1). Visor with multiple breathing holes (2). Lancaster Necklace (3). Knightly belt, adorned with precious stones, on which hangs a sword and dagger-rondel (4). Sword from the tomb of Heinrich V (5). Finger plate with fingers (6). Spur wheel with an asterisk (7). Fashion first quarter of the XV century (8,9,10). Fig. Graham Türner. 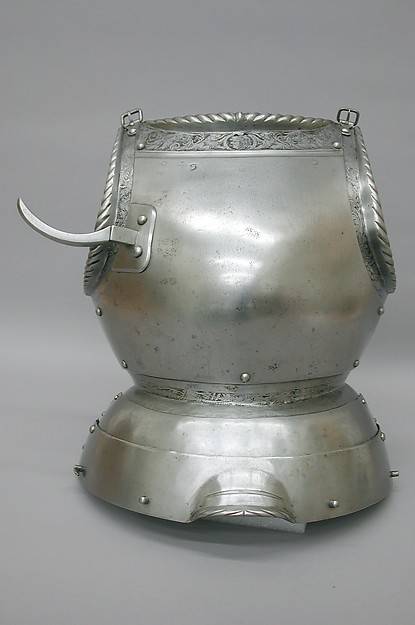 The experience of the Hundred Years War showed that it was impossible to force a horse to run on stakes, behind which English archers used to hide, while the latter did not cause any special damage to the riders, but they did multiple and serious wounds to the horses. They fell, shied away in different directions, rested and did not obey the horsemen, simply became distraught from pain and ... destroyed the dense knightly structures, turning them into a completely uncontrollable dump. For example, in the Battle of Crecy, the wounded horses simply lay down on the ground — a completely natural reaction for a bleeding animal that could not run anymore. Well, if the cavalry system was broken, and many horsemen were in a hurry or even lay on the ground, then the advantage was clearly transferred to the enemy’s infantry — lighter and more maneuverable, which in this situation had a margin over the knights! 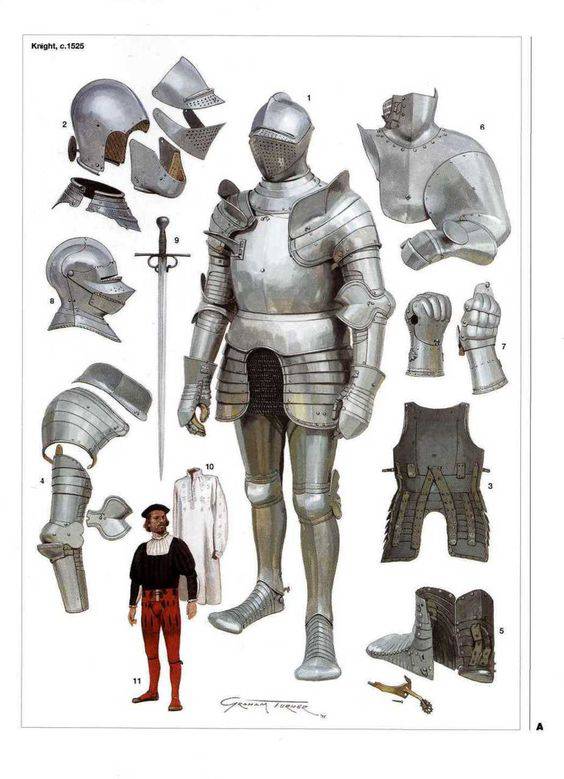 Knight 1525 g. The figure is made according to the real 1527 armor, made, most likely, for Henry VIII in Greenwich. A helmet with a flange collar, thanks to which it turns with the head. The rear of the disc most likely closed the chin strap fastener (1). View of the armor from the inside (2). A typical Greenwich halfdron of lame plates riveted to leather belts inside (3). Detail of the armor 1540 g .: Grangarda - an additional plate for the left side of the chest, pasgarda - for the elbow and the armor - closing forearm and wrist. The connection manier and gauntlet closed disc (4). Competitive gauntlet "with constipation", not allowing to lose a weapon (5). Helmet with visor like a sparrow beak (6). Sword with rings for fingers (7). Clothes of this time: a long shirt and a doublet with pants tied to it with laces (8,9). Sabaton type "bear's paw" (10). Fig. Graham Türner.

The traditional question was also asked, “but where did they learn from?” So today, modern research methods allow us to find out not only how the armor was trimmed and what technologies were used for this, but also go much further, learn the features of technological methods of their manufacture and, of course, more accurate dating. This task was set by two British historians Alan Williams and Anthony de Reik, who prepared a very interesting study: “The Royal Arsenal in Greenwich 1515 - 1649: история his technology ”, which complemented the work of K. Blair, written by him earlier. Today it is the only work of this level, based on the study of the armor of the Renaissance using the methods of metallographic analysis. In total, more than 60 samples of armor were investigated, which revealed many new and previously unknown facts regarding their manufacturing technology. The book 180 black and white drawings and photographs, as well as four color illustrations. 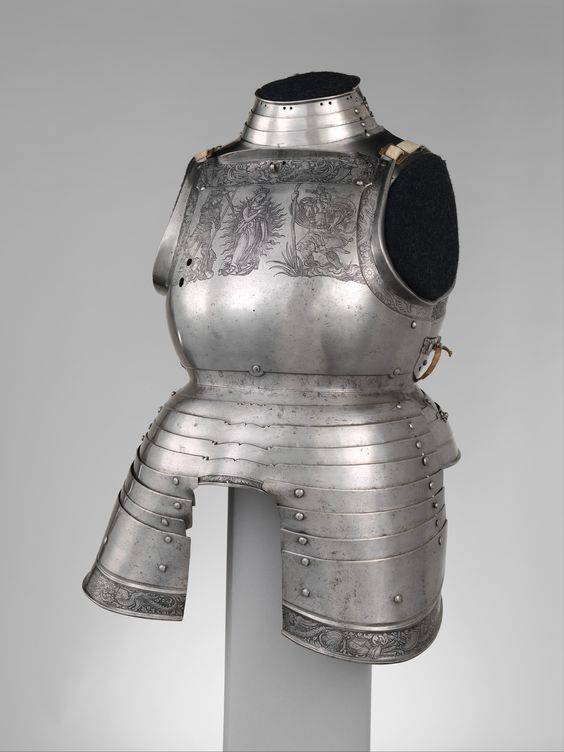 It was possible to strike a knight in "white armor" not only with an arrow, but also with a sword. It is well known that in 1300 - 1500's. in medieval Western European swords, not only the shape of the blade, but also the hilt and pommel changed. Handles, for example, between 1410 and 1440. acquired, which became characteristic of them, the bottle form, and the tops were made of the traditional form in the form of a lenticular disc. At the same time, new, previously non-existent, most advanced species also appeared: “cork from the carafe”, “fish tail”, “pear”, etc.

The crosshairs became thinner, but longer, and received a characteristic bend from the handle to the side of the blade, although straight crosshairs were also used. Some swords in the first half of the fifteenth century, from the side of the blade, a cross-section appeared at the cross-hair, into which the index finger protruded. Then they added one to the second ring, so as not to think which side to take up the sword in the heat of battle.

Swords of the sixteenth century, according to E. Oakeshott, should be divided into three main types. The first ones are piercing and also slashing swords, having a simple handle for one hand, which were worn directly on the belt. Then one should call “swords with one and a half hands,” also known as saddle, as they were driven from the saddle and, last of all, they were the legendary two-handed swords, which were used not by knights, but by the infantry of the Swiss confederates and the German landsknechts. The average weight of an ordinary sword in the X and XV centuries. reached 1,3 kg; and in the sixteenth century. it was reduced to 900. But bastard swords (“one and a half hand swords”) could have a weight on the order of 1,5 - 1,8 kg, but the weight of two-handed swords rarely exceeded 3 kg. The latter reached their zenith between the 1500 - 1600 years, but they were precisely infantry weapons.

Sword of the XV century with the handle of the bottle. Metropolitan Museum, New York.

Interestingly, while watching how firearms develop, some people were so inventive that they thought it was possible to combine them even with a knight’s sword. In the famous collection of the Royal Arsenal in the Tower there is, for example, a saddle sword (or another name for it - estk) with a handle, which is a rifle barrel. The heads were removed from her, and the powder charge inside was ignited manually with the help of a wick through the hole at the handle, closed with a sliding cover. It is difficult to say how this sword could be used in battle, and whether Henry VIII himself ordered it to one of the gunsmiths - as you know, a great lover of all sorts of weapons wonders, or one of the masters came up with "it" to please the monarch, but the very existence of the noble the sword, combined with the "weapon of the devil," indicates a change in attitude towards this knightly shrine. After all, even Bayard himself, recognized as a model for medieval knighthood, ordered to hang up everyone who fell into his hands with an arquebus in his hands, and here in the royal Tower we see such an “unholy” weapon in the arsenal of the king himself!

St. Eustace with the image on the altar of Albrecht Dürer, 1500. Before us is a typical landsknecht.

By the way, it was at the same time that the armor of the cavalry of the Reiters began to be painted black with ordinary paint, which in joints was erased to shine. Even there was no longer any strength or opportunity to bury them, and why? After all, the time of the proud knights was passing away right in front of the contemporaries of this process. 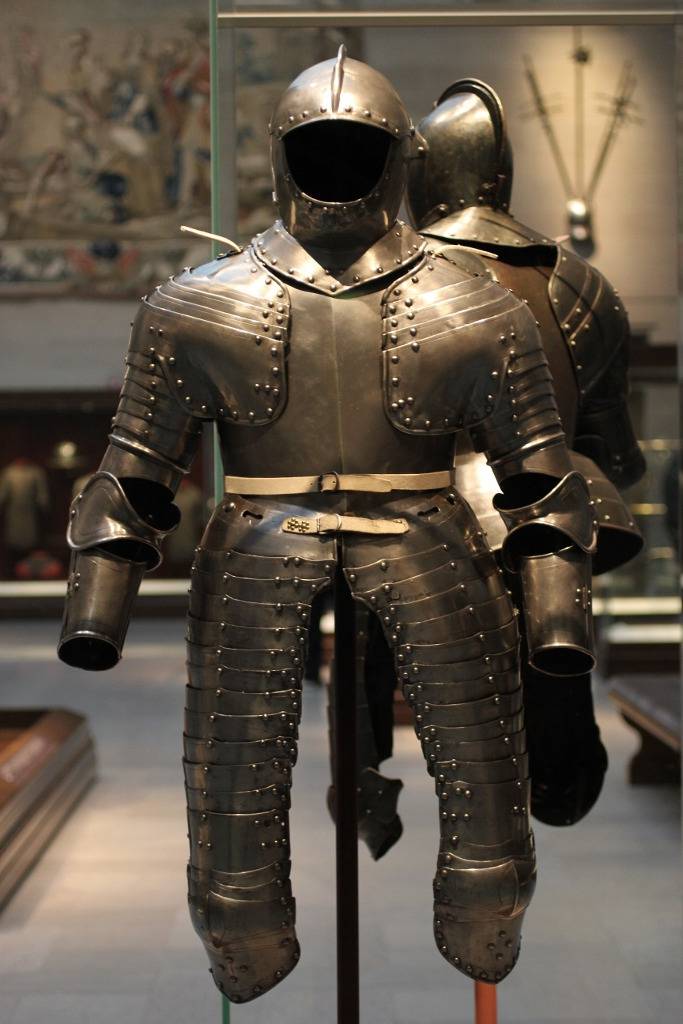