July 16 2016
364
The military in Turkey attempted a coup d'état. Events developed rapidly, military equipment was heard on the streets of the Turkish capital, shots were heard, reports RIA News. 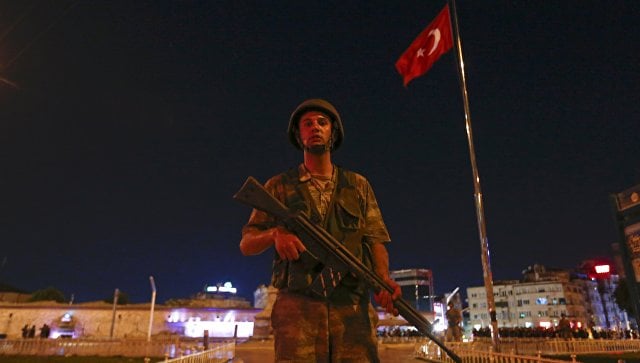 The first reports of shooting in the capital of Turkey appeared around 23.00 MSK, fighters and military helicopters noticed in the skies over Ankara. Movement through the Bosphorus from the Asian to the European part of Istanbul was blocked, military equipment appeared on both bridges. Around the same time, Facebook and Twitter were blocked in Ankara.

The media reported that a military helicopter opened fire in the region of the Turkish National Intelligence Service in Ankara. 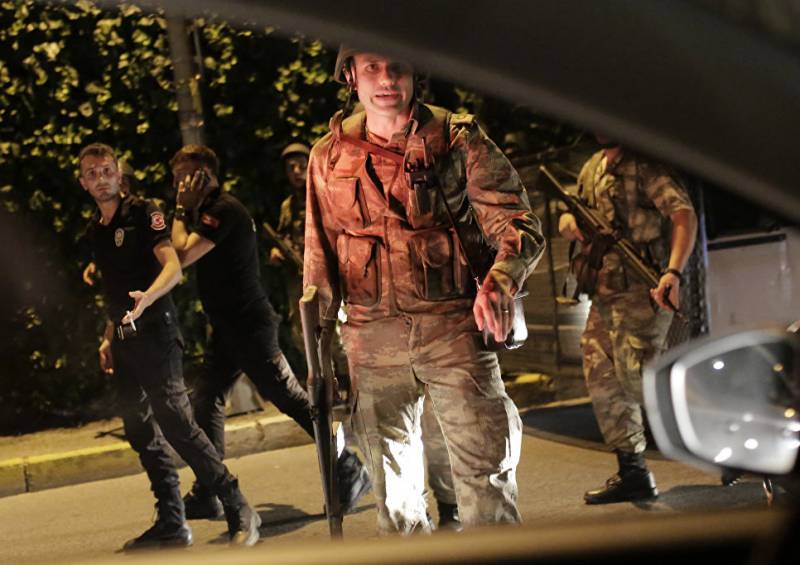 At 23 hours, Turkish Prime Minister Binali Yildirim announced an attempted military coup in the country. State TV of Turkey stopped broadcasting. Tanks were transferred to the area of ​​Ataturk International Airport in Istanbul.

The Turkish General Staff announced the transfer of power in the country to his hands and the removal of the Turkish leadership. Anadolu Agency reports that Turkish Chief of Staff Hulusi Akar was taken hostage by a group of military. The Turkish military said that all existing international relations after the coup will continue, reports Reuters.

The Greek army was brought to alert in connection with reports of a coup in Turkey.

The residence of President Erdogan in Istanbul is taken under heavy guard, reports DHA. The street on which the residence is located, is blocked in both directions, there is a cordon near the house.

A curfew was announced throughout the country. Turkish airports have closed. State TV of Turkey made a statement about the situation in the country under the dictation of the military. GosTV reported that the new constitution of Turkey will be prepared in the near future. The General Staff said that the leadership of Turkey can no longer fulfill their duties.

The military who seized power declares that they took power to restore constitutional order, freedoms and respect for human rights, and the government systematically violated the law and was involved in corruption. 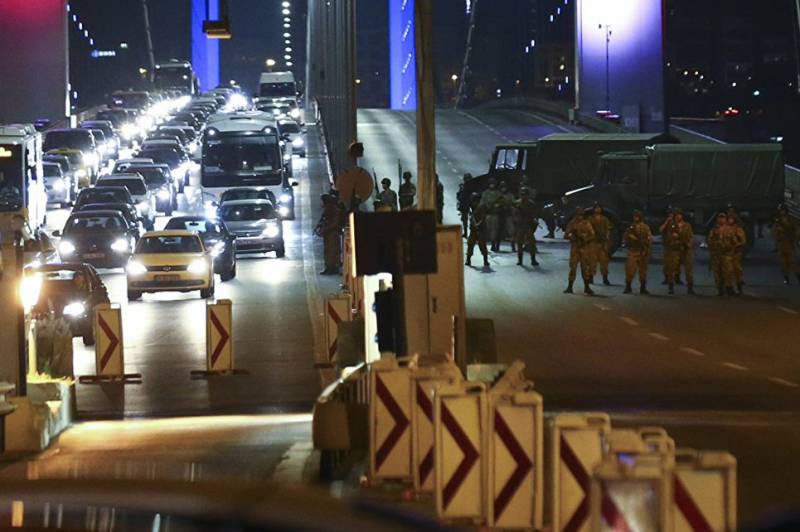 © REUTERS / Stringer
The situation on the bridge over the Bosphorus in Istanbul. 16 July 2016

The Turkish President called on the people of the country to take to the streets because of the attempted coup. He described the events in Turkey as an attempt to revolt a small military group.

"I urge all residents of countries to go to the square and help stop the chaos," he said in a televised address.

The president promised to punish the coup organizers. “The government has many enemies. Everyone who does this will bitterly regret,” he said.

The head of the Ministry of Defense of Turkey called the "piracy" statement of the military about the seizure of power in the country.

In the constitutional field

Events in Turkey caught Russian Foreign Minister Sergei Lavrov during talks in Moscow with US Secretary of State John Kerry.

"We receive information in real time about events in Turkey ... Of course, we proceed from the assumption that any bloody clashes should be avoided and all issues in any state that arise should be resolved exclusively in the constitutional field," Lavrov said.

“As for Turkey: since we (with Lavrov) had intensive discussions all day long, Sergey and I only found out at the last minute what was going on there or not. So I have nothing to say, except that we heard the same messages that others have. I have no details at the moment, "said Kerry.

F-16 fighter shot down a military helicopter in the sky over Ankara, there are victims

F-16 fighter shot down a military helicopter in the sky over Ankara, as a result of the incident people were killed. This is reported by NTV.

The military in Turkey announced a coup in the country. State television reported that Turkey is now under the control of the Peace Council. President Recep Tayyip Erdogan accused the supporters of the opposition preacher Gulen of attempting a coup d'etat and called on the Turkish people to take to the streets.

About 30 coup participants pass weapon on Taksim Square in Istanbul

Around 30, Turkish soldiers who took part in an attempted military coup, hand over weapons to the police in Taksim Square in Istanbul, Reuters reported, citing witnesses. 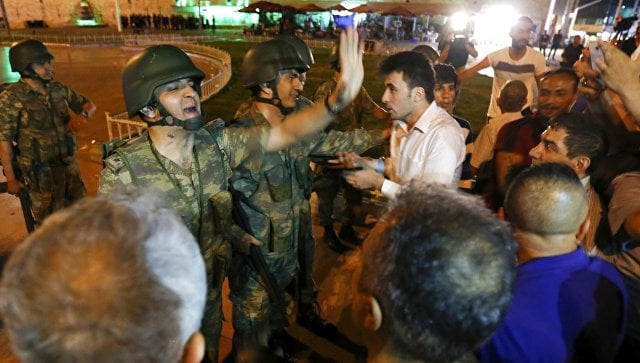 According to the agency, the military began to hand over weapons after they were surrounded by armed police in a square in the center of Istanbul. The police took them into custody.

Earlier it was reported that a military plane inflicted several air strikes on Taksim Square in the center of Istanbul.

Media: the explosion occurred in the building of the Turkish parliament in Ankara

Earlier, two bombs were dropped on the building of the Turkish parliament in Ankara during an attempted military coup. This was reported by Anadolu Ajansı. According to the agency, the first bomb fell near the entrance to the building. The building is shrouded in smoke, glass is broken in it. At least 12 people have suffered and are in serious condition.

In the area of ​​the parliament building in Ankara, a new series of explosions occurred

A new series of explosions was heard in the area of ​​the Ankara parliament building, a firefight is heard, the RIA correspondent reports News from the scene. 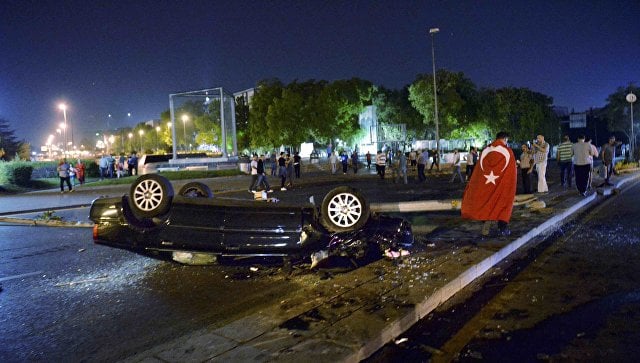 Previous explosions in the tasks of parliament were associated with air strikes inflicted by the planes of the coup supporters. At least 15 people were injured, there is no information about the dead.

The victims of the attempted coup in Turkey were 60 people

In clashes in Turkey, caused by an attempted coup, killed 60 people. This was reported by the prosecutor's office of the Gelbashi district in Ankara.

Turkish Prime Minister Binali Yıldırım said that more than 120 people were arrested for attempting a coup in the country, reports France Press.
Earlier, Turkish President Tayyip Edogan said that he would clear the army of traitors. He promised many more arrests in the armed forces, up to the highest positions.
Ctrl Enter
Noticed oshЫbku Highlight text and press. Ctrl + Enter
We are
Reports from Strelkov Igor Ivanovich 19-20 July 2014 of the yearThe situation in the south-east of Ukraine. Chronicle of events. 3 May
Military Reviewin Yandex News
Military Reviewin Google News
364 comments
Information
Dear reader, to leave comments on the publication, you must sign in.