The future of Germany. Between puppet and empire 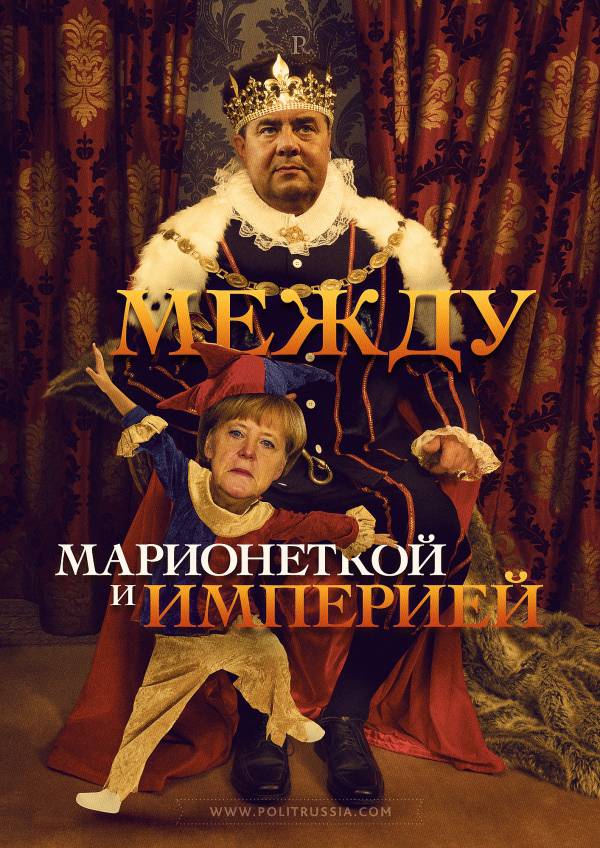 In order to better understand the actions of the German leadership in the international arena, it is necessary to take into account the whole set of challenges that now face Berlin and firmly understand that Ukraine, Syria, ISIL and even relations with Russia as a whole are not a priority for Angela Merkel’s office. The priority place is firmly occupied by the question of the survival of the European project itself and its future, which is not at all cloudless.

The main question that Merkel had to answer at a recent press conference was about ... Italian banks. More precisely, their portfolio of toxic loans for 360 billion euros, which can sink the Italian banking sector, and then cause a wave of bank failures of European banks. You can ask a reasonable question about why Merkel should deal with the problems of Italian banks, but the question will be superfluous. In today's Europe, Berlin is responsible for everything, and at the same time it pleases and scares our Teutonic neighbors.

The exit of Great Britain from the European Union was a shock and a gift from heaven for the German elite in one bottle. On the one hand, the exit of Britain is a severe blow to the European Union, suggesting a sharp deterioration in its image, which the Germans have been working on for decades. On the other hand, Great Britain was the main lever of influence on the European policy from Washington, and therefore, after Brexit, Berlin had a whole range of new opportunities, but also new risks.

Berlin took advantage of some of the possibilities immediately. The negotiations on the "Transatlantic Partnership", which the United States, like air, needs in order to fix the colonial status of the EU has reached an impasse. The French were the official brakes, but the British and American media complain about the behavior of the German negotiators and Vice Chancellor Sigmar Gabriel, who do nothing to unlock the situation. According to the apt source of the Financial Times, the negotiations on the “Transatlantic Partnership” were “finished off” after the “Brexit”.

German financial centers are trying to replace London in the financial sphere of the European Union, and this causes serious irritation to other countries and British banks that hoped to maintain their influence in Europe, despite the exit from the European Union. Buses and special advertising vehicles with posters "Dear Startupers! Keep Calm and Move to Berlin!" - and this is only the most visible sign of the efforts of Germany to "squeeze" the British economic influence from the EU. It is very possible that British banks will face the fact that the European regulator of the banking and financial sector will deny them the so-called "passport", that is, permission to directly provide their services to European companies and individuals, which will lead to huge losses for the British financial sector and significant growth in the client base of German banks and funds.
The pressure of political opponents and business lobbyists makes Angela Merkel publicly resurrect the idea of ​​a common economic space from Lisbon to Vladivostok, of course, with all the reservations necessary to save face in front of Washington, but here the fact of recognizing the need to build some partnerships with Moscow rather than another iron curtain, on which Russophobic segments of the American and German establishment insist so much. The same trend fits well with the position of the German and Austrian foreign ministers, who are in favor of a “gradual lifting of sanctions from Russia”, as quasi-official Brussels media have reported with deep regret.

Statements by the German Foreign Minister, who reprimanded NATO for "sagging weapons"on the Russian border within the framework of the American exercises - also from the same series of actions that run counter to the policy of Washington, which is already dissatisfied with the intensification of Russian-German business cooperation and the fact that German investments in the Russian economy are breaking records despite sanctions.

However, the “German rebellion” cannot but cause quite tangible and even fierce resistance from the pro-American part of the German establishment and radical interventionists from the American elite. Those who are trying to reformat the EU in such a way that it primarily serves the German, rather than American interests, are under heavy pressure, which manifests itself in the economic, political and military sphere. Americans persistently try to repeat the old trick by organizing the most destructive conflict on the European continent, in which Germany and Russia will once again besiege each other. The recent decisions of the NATO summit and the wording about the risks associated with Russia, which are included in Germany’s new military doctrine (White Paper), point to US pressure on Berlin and attempts to force Germany to participate in the militarization of Europe and pay for this militarization directed against Russia .

In economic terms, the main German vulnerability is Deutsche Bank, which has serious problems with its portfolio of 72.8 trillion-dollar derivative contracts and its own capital deficit. The slightest mistake, the default of one of the major counterparties or a large fine from the American regulator (modeled on the fine that Washington has punished BNP Paribas for failing to comply with the restrictions imposed by the State Department) will easily force the flagship of the German economy to sink. Most likely, all parts of the German and American establishments understand that the bankruptcy of Deutsche Bank can lead to a collapse of not only European, but also the American financial system, and this is the only thing that so far gives the bank a chance to continue working.

At the political level, the conflict between supporters of the existence of Germany as a colony of the United States and supporters of independent Germany sometimes spills into public squabbles between members of the Merkel government. An echo of one of these conflicts is public criticism of Foreign Minister Steinmeier by Finance Minister Schäuble, who said that Steinmeier’s statement about NATO "weapon saber" was "not only a rhetorical mistake" and demanded a tougher stance against Russia.

The struggle within the German establishment is far from complete and now it is impossible to say anything definite about the future of Germany and about the future of its relations with the United States, Russia and Europe. However, there are several important time cut-offs for understanding the situation. The first cut-off is the end of 2016 of the year. If by that time the Americans fail to "push through" the signing of the Transatlantic Partnership, this will be a serious defeat for Washington and a great victory for those who are working to separate Europe from the United States. The second cut-off is the end of January 2017. If sanctions against Russia are extended in their current form, this will be a bad sign of the growing influence of the United States and the suppression of the European front, while the decision to gradually lift the sanctions will be a positive signal. The last cutoff is autumn 2017 of the year. According to the results of the elections in Germany, it will be possible to judge who will have a decisive influence on the policies of Berlin and on the future of the entire European project. The defeat of pro-American politicians will mean that the European Union is waiting for radical changes.

Today there are reasons for restrained optimism and for believing that Russian-German cooperation has certain chances for the future. The Kremlin’s strategy in the European direction gives encouraging results, and it’s not long to wait for a final clarification of the situation.

Ctrl Enter
Noticed oshЫbku Highlight text and press. Ctrl + Enter
We are
A great interview with Sergey Lavrov: about Ukraine, Obama and IranWay out of chaos
Military Reviewin Yandex News
Military Reviewin Google News
37 comments
Information
Dear reader, to leave comments on the publication, you must sign in.