The most unusual military parade 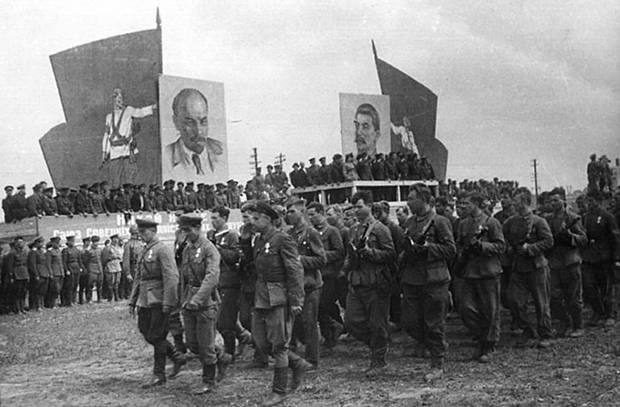 July 16 The famous partisan parade was held in the liberated Minsk on July 1944.

This parade is justly distinguished from all the solemn military processions and parades in stories of humanity. After all, it was not the soldiers of the regular army who participated in it, but the fighters who fought in the occupied territory in the partisan detachments of Belarus.

Belarusian land was liberated from the German invaders in the summer of 1944, during the swift attack of our army during Operation Bagration. Great help to the advancing troops was provided by the Belarusian partisans.

By the time of the liberation of Belarus and the capital of Minsk, 1255 guerrilla units numbering about 370 thousands of fighters fought on the territory of the republic. During the occupation, partisans of Belarus derailed 11128 enemy lines and 34 armored trains, crushed 29 railway stations and 948 enemy garrisons, blew up 819 railway and 4710 other bridges, destroyed 939 German military stores.

Minsk The Soviet army liberated 3 on July 1944, and almost immediately numerous partisan detachments began to gather in the war-torn capital of Belarus. After the invaders were expelled from their homeland, the former fighters of the "partisan front" had to either join the regular army or begin work to restore peaceful life in the liberated territory. But before permanently disbanding the partisan detachments, the leaders of Belarus and the Central Headquarters of the partisan movement decided to hold a real partisan parade in Minsk.

By the evening of July 15, 1944 of partisan brigades of the Minsk region gathered in the capital of Belarus, 20 brigades from the Baranavichy (now Brest) region and one of the Vileyka (now Molodechno) regions - more than 9 thousand people. On the eve of the parade, many of its participants were presented with the medal “Partisan of the Patriotic War” - for the majority of those who fought over the front line, this was the first state award in their lives.

The guerrillas did not just gather in the capital of Belarus, on the way they conducted a sweep of the surrounding forests from the defeated German troops. This is how Ivan Pavlovich Bokhan, a native of the village of Skobino of the Minsk region, recalled this, then an 17-year-old partisan fighter, whose parents were shot by the occupiers:

“Two days before the arrival of the Red Army, we liberated Kopyl, defeated the garrison and captured the city ... Our brigade was transferred from the Kopyl district to Minsk. There was a large German group surrounded, someone was taken prisoner, and some fled. The task of our brigade is to catch these groups on the way to Minsk. That's how we went. Utrechkom rise, go, look - smoke in the forest. You come up - the Germans 4-5 are sitting by the fire. Immediately: “Halt!” If only for weapon clutches - we immediately kill ... They came to Minsk. 16 July 1944, a guerrilla parade, in which I participated. It was an indescribable spectacle - how many partisans were there! ”

By 9 in the morning of 16 July 1944, 30 of thousands of partisans lined up on a field in the bend of the Svisloch River for the parade and 50 of thousands of Minsk residents who survived the occupation gathered. At the parade there was a large delegation of fighters and commanders of the Red Army led by the commander of the Belarusian Front 3, General of the Army Ivan Danilovich Chernyakhovsky - it was his troops who liberated the capital of Belarus from the Germans.

This is how Vasily Morokhovich, a fighter of the Kommunar partisan detachment, recalled the partisan parade: “Overgrown and emaciated partisans marched between the destroyed and burned houses of Minsk. In their hands they had the most amazing collection of weapons of the armies fighting then, mottled with weapons, which the blacksmiths had made in the woods. They were greeted with delight, they walked proudly with awards on their chests! They were the winners! ”

Partisan equipment participated in the parade, mainly German trophies. But there were samples with an amazing fate - for example, a ZIS-21 truck with a gas engine capable of running on wood. At first he was captured by the advancing Germans, and then hijacked by Belarusian partisans - the German truck driver Hans Kuljas sided with the partisans and remained in our country after the war.

Vasily Petrovich Davzhonak, in 1944, the 19-year-old fighter of the Fighting unit recalled an unusual partisan companion: “The kid suffered with us all the field life, we practically ate with him, slept ... even fought! Somehow there was a major clash with the Germans near the village of Okolovo, near Pleschenitsy. I remember this fight very well, at that time it was the second number of the machine-gun machine - I handed in ammunition. All the time of the battle, the Kid did not leave us. And he acted very competently: as soon as the Germans opened heavy fire, calmly retreated under cover, waited for a pine tree, waited, and then went out again and carefully watched the fight. ”

However, the goat was not only a talisman - during hiking on the woods, he dragged a loaded bag with medicines. Together with the partisan squad 16 July 1944, the Kid was among the participants of an unusual parade.

“We decided that the Kid deserved to be with us at this solemn moment. - recalled Vasily Davzhonak. - Partisans from our squad he was thoroughly cleaned, dressed up in a ribbon decorated with German orders. We received Hitler awards as a trophy when we captured the German headquarters car, we decided that it was the place for them on the Kid’s neck. The parade began, and our dressed-up goat immediately took the already familiar place - in front of the column. I remember that I noticed how Chernyakhovsky looked at our “pet” in surprise and, gesticulating with enthusiasm, spoke about something to his assistants. In general, in my opinion, the authorities liked our initiative ... "

It was supposed that the Kid would pass unnoticed inside the column, but during the ceremonial march the battle goat, escaping from the hands of the escort, attached itself next to the command of the detachment, evoking mad delight from the audience. Decorated with captured Nazi crosses, the Kid got into the lens of the operator who shot the parade, and forever remained in history.

Almost immediately, a legend arose that the goat in the German orders was specially invented by Soviet propaganda. In reality, it was an initiative of ordinary partisans-winners, thus expressing their contempt for the defeated invaders.

The guerrilla parade of 16 July 1944 in Minsk rightly went down in history as the clearest symbol of the victory of the fraternal peoples of Russia and Belarus over the external enemy.