Armenian sky with a Russian shade 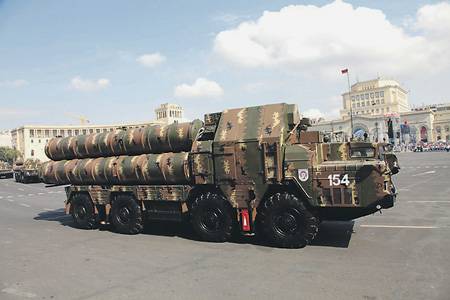 The Armenian parliament ratified the treaty between its country and Russia on the creation of a unified air defense system. By this act, in support of which 102 votes were cast, but against only eight, Yerevan legalized an agreement on the creation of a unified regional air defense system in the Caucasus region, which was signed last December by the defense ministers of the two countries Seyran Ohanyan and Sergey Shoigu. The document is designed for five years with the possibility of renewal for the same period, if neither side wants to suspend it. What, as is customary in international relations, should be warned six months before the expiration of the contract. However, no one doubts that in 2021, the extension of this contract will pass almost automatically. It is very beneficial to Armenia. Why?

ONE air defense for two

The head of the military department of Armenia Seyran Ohanyan told this in great detail to the Public Television of the Republic. “Within the framework of this agreement, we will be able to use, for example, Russian fourth-generation multi-role fighters, C-300 systems, and their anti-missile capabilities, for example, in implementing regional anti-aircraft tasks,” he said. “We will be able to use broad radar capabilities in aerial reconnaissance.”

Recall, on the territory of Armenia there is the 102-I Russian military base, which, in addition to tankmen, motorized riflemen and gunners, includes the 988-th anti-aircraft missile regiment armed with the C-300В anti-aircraft missile system and the corresponding radar stations for detecting an airborne target and tracking her, pointing missiles at her, as well as two or three squadrons of MiG-29 fighter jets, which, if necessary, will perform the role of interceptor of foreign aircraft and together with anti-aircraft gunners guaranteed to provide Armenia with clean ebo over its towns and villages, mountains and valleys. In addition, Armenia itself has fairly solid air defense systems, among which are Soviet-made anti-aircraft missile systems, such as the Neva C-125, with a target range of up to 20 km, and the Krug air defense system with a range of 50 km, as well as newer and more advanced systems, such as the C-300PS anti-aircraft missile systems with a range of 150 km and the Osa-AKM, Shilka, Strela-10 and Igla short-range systems. And at the disposal of the republic’s air defense forces, after its unification with the Russian air defense system, all the information received by the soldiers of the Southern Military District of Russia and the country's missile defense / air defense forces is received.

Retired Lieutenant-General Norat Ter-Grigoryants, formerly deputy chief of the General Staff of the USSR Ground Forces and one of the founders of the Armenian Armed Forces, stated that “the creation of a single CSTO air defense system is a strategic decision. At the same time, a single radar field is being created between Russia, Armenia, Belarus and other countries of the organization, which should shield the sky above us from the threat from the NATO countries, and especially Turkey. ” Lieutenant-General (Ret.) Alexander Luzan, former deputy commander of the air defense forces of the Russian Ground Forces, agrees with Ter-Grigoryants. In particular, he said that the creation of a unified air defense system of Armenia and Russia is of great importance for our countries. Including separately for Russia.

“Although we do not have a single airspace with Armenia,” the general noted, “Georgia is between us, nevertheless, the unified air defense system allows us to create the military field of the Aerospace Defense Means taken outside the country — the anti-aircraft missile system and air cover our border area. "

“Our outpost in Armenia (102-I military base),” says Alexander Luzan, “greatly weakens the capabilities of Turkey as a member of NATO and as the strongest armed state in this region. And we know from experience that Ankara can mess things up even without the consent of Brussels or against his wishes. And the unified air defense system of Russia and Armenia will be a serious warning to it. ”

WHO HAS KEYS FROM THE SKY

During the debates in the Armenian parliament, there were no questions about the need to ratify the agreement on a unified air defense system between Yerevan and Moscow. The deputies were worried about other problems: how this treaty will guarantee the safety of the airspace over Nagorno-Karabakh and who will decide on stopping the flight of other aircraft, if they suddenly invade the skies of Armenia (Moscow is far, and the decision must be made in a matter of minutes). On the first question, they agreed that it relates to the relationship between Armenia and Nagorno-Karabakh, which Yerevan has undertaken to defend. As for who will make the decision, if the sovereignty of Armenia is violated, then this, of course, is first of all its military leadership. The military post of the republic’s air defense systems, both anti-aircraft missile systems and radar stations, is occupied by Armenian military personnel, and they will follow the orders and instructions of their command, not the Russian one. And then everything will be decided by the situation: who, how and why was in the sky of the republic - by chance, deliberately, with what consequences. Will the air defense system of the Russian military base come into action or will they not have to do it?

Armenian ex-defense minister Vagarshak Harutyunyan, who strongly supported the agreement on a unified air defense system, said at a hearing in parliament: “Thanks to the Armenian-Russian relations, we were able to preserve, develop and bring the air defense system to such an extent that nor Azerbaijan, and in some respects, even Turkey. This agreement is based on our interests. It talks about the coordination of joint actions of the joint regional air defense system in the Caucasus region of collective security and the troops that are part of other regional air defense systems. ” Harutyunyan also believes the joint air defense system is a reliable defense against possible aggression from Turkey. The official position of Yerevan was voiced by the Minister of Defense Seyran Ohanyan: “The implementation of the agreement will strengthen the protection of the country's borders, as well as gain access to broader intelligence available in the general information field in terms of prevention and prevention of possible violations. In this regard, we have no more reliable partner than Russia. ”

Let us add from ourselves that in June last year, an agreement on military-technical cooperation was signed between Yerevan and Moscow, under which a loan in the amount of $ 200 million was allocated to Armenia for the purchase of Russian weapons. Including air defense equipment. And since Armenia is a member of the Collective Security Treaty Organization, it will receive all such equipment at preferential prices. In addition, as Lieutenant-General Luzan noted, the unified air defense system is the unified ideology of the use of air defense equipment, the unified development system of military equipment that guards our common airspace, the unified combat training systems and the improvement of professional qualities of military personnel, which means that It is also important, the strengthening of friendly relations between the allies and their peoples. Armenia is the only truly open and friendly country in Transcaucasia. And these allied relations need to be cherished.