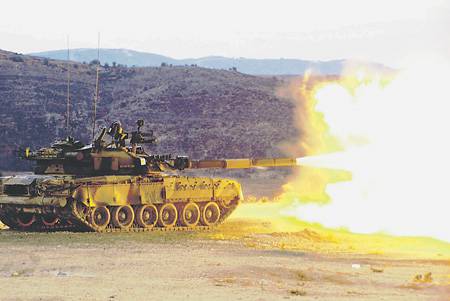 6 July 1976 was adopted by the Soviet Army T-80. The design of the machine was developed by specialists of the Special Design Bureau of Transport Engineering (St. Petersburg). It was produced including Omsktransmash. Today, both of these enterprises are part of the Uralvagonzavod research and production corporation.


FROM DESIGN TO IMPLEMENTATION

The idea of ​​installing in the engine compartment tank A gas turbine originated in design minds for a long time. In 1948–1949, the Design Bureau of Turbine Production of the Leningrad Kirov Plant (LKZ) was instructed to develop a gas turbine design for a heavy tank. The GTE project was completed with a stationary (non-rotating) heat exchanger. However, the fuel consumption obtained during the calculations was unacceptable, and work on this project was discontinued.

Then various design offices across the country made repeated attempts to develop a gas turbine engine. 16 on April 1968 of the year was issued a decree of the Central Committee of the CPSU and the USSR Council of Ministers on the creation of gas-turbine power plants for armored vehicles. The purpose and purpose of the work were defined as follows: “... Creation of a tank gas turbine engine with an 1000 hp power. for the T-64A tank in order to improve its dynamic and operational characteristics, as well as to increase combat readiness due to a drastic reduction in the time required to prepare the engine for launch at low ambient temperatures. " 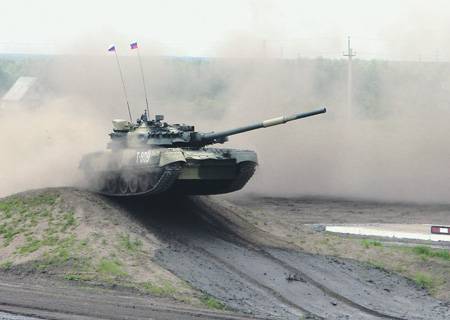 Works on the T-64 tank with the GTSU were headed by Chief Designer of the OKBT (now Spetsmash JSC) Nikolai Sergeevich Popov (Hero of Socialist Labor, Academician of the Academy of Transport of the Russian Federation and St. Petersburg Academy of Engineering, winner of the Lenin and State Prizes), and in the power plant for him - GTD-1000 - chief designer of the Leningrad NPO "Plant them. V.Ya. Klimova (ZIK) Sergey Petrovich Izotov.

As a result, under the leadership of N.S. Popova created the “219 SpX1 Object” tank, but during the factory tests of the tank it became clear that a comprehensive solution was needed to a number of issues, including the creation and testing of not only the new transmission and control drives, but also the new running gear. The base tank T-64A does not provide the realization of the increased speed and dynamic capabilities of the tank with the CCD. The new prototype of the tank, in the design of which the new designs for the running gear were embodied, was given the designation “219 SpX2 Object”. His tests confirmed the correctness of the decisions of Leningrad designers.

A qualitative assessment of the work carried out can be judged by statistics figures. So, before adopting the new tank, 118 of various experimental machines were manufactured, which traveled 647 thousand km (16 skirted the equator) and worked 40 thousand hours. During the tests, 150 power plants using 240 gas turbine engines were used. In total, for eight years of work on the creation of a tank with a GTSU, 158 prototypes of tanks were manufactured, of which 31 - with the undercarriage of previously created tanks, the rest - with the original undercarriage with an intermediate roller of intermediate diameter and a track with a rubberized treadmill. During this period, tanks passed all types of tests in the most severe climatic conditions of our country, reaching a total mileage of more than 1 million km.

During the tests, the tank “Object-219” was constantly improved. Sequential elimination of design defects of the base machine, identified by installing the GTE, led to the creation of a new tank.

Immediately after its appearance, the “eighty” became a dream for many foreign military men. Especially T-80U, equipped with an auxiliary power plant, attracted the European military - adherents of the tactics of ambush warfare. A statement by the Minister of Defense of the Syrian Arab Republic, Mustafa Tlas, that he, as a soldier and specialist in such a technique, considers the T-80 "the best tank in the world" was included in the encyclopedia.

“High export demand for Russian equipment is a serious assessment of its quality,” said Nikolai Starovoitov, deputy head of the maintenance and repair department at Omsktransmash, who for many years carried out the service of “eighty” abroad. “For a long time, the T-80 remained one of the most balanced and equipped tanks for combat use.”

The eight-dozen gas turbine was introduced to the general public in the 90s, when the car began to participate in various equipment shows and international arms exhibitions. The high point of the T-80U, which had just received permission to sell abroad, came in 1993 during the IDEX exhibition in Abu Dhabi. The car perfectly demonstrated fire capabilities and perfectly skated on the tankdrome the most complicated program with overcoming all obstacles. The attempt of the American tankers to repeat on their “Abrams” Block III the success of the Russian military turned out to be a failure: while moving along the embankment with a comb, the “Abrams” jumped off the slope, losing the caterpillar. Following the Russian T-80U to the applause of the audience made a spectacular 14-meter jump from a springboard, than for many years provided himself with the epithet "flying tank". 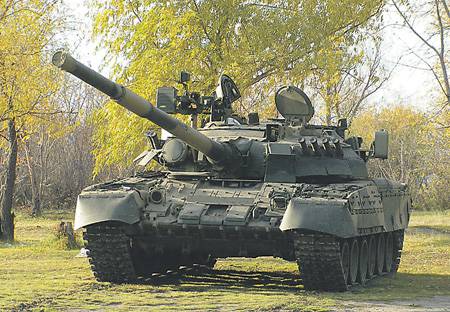 The T-80U was distinguished by a modernized gun, new fire control and guided weapons, a new engine and other improvements. Photos are provided by Omsktransmash JSC

It is worth noting that the tank chassis was recognized as the most successful for the entire history. Base "vosmidesyatki" served as a contributor to a number of other techniques, clad in armor: recovery vehicle BREM-80U, trencher BTM-4M floating transporter PTS-4, the special fire engine JMP highly secure vehicle "Ladoga", artillery self-propelled guns "Peony" and "Msta-S", an anti-aircraft missile system C-300В.

During its many years of service, the T-80 was repeatedly upgraded, producing various modifications of it: the T-80B (1978) - missile-gun tank; T-80BV - modification with hinged dynamic protection; T 80U (1984) - variant with upgraded gun new complex fire control 1A45 duplicated from the commander, a new set of guided weapons 9K119 with guided missiles on a laser beam, a new engine GTD-1250, Energoagregat GTA 18A, an air intake device of internal dynamic protection and thermal imager, etc. The serial production of these models was carried out by the Omsk Transport Engineering Plant.

The production of T-80 tanks in Russia was discontinued in the second half of the 90-s. After the collapse of the USSR and cuts in the ranks of the Russian army, some of the equipment was freed up. Since a significant part of the tank fleet of the Russian Federation now consists of T-72 type tanks, the country's leadership decided to withdraw T-80 from the troops for storage as a valuable combat resource for a special period.

Ctrl Enter
Noticed oshЫbku Highlight text and press. Ctrl + Enter
We are
Heavy tanks of the USSR in the postwar periodT-80 - 35 years in service
Military Reviewin Yandex News
Military Reviewin Google News
163 comments
Information
Dear reader, to leave comments on the publication, you must sign in.