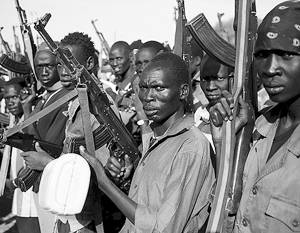 The youngest state of the world - South Sudan - is again plunging into civil war and is on the verge of mass slaughter. Quite typical for the continent ethnic conflict is complicated by the fact that a full-scale war is beneficial to the main international player - Washington, because it weakens the position of its main rival - China.

For almost a week in Juba - the capital of South Sudan - the shooting does not stop. The streets are patrolling Tanks. Some quarters are processed by artillery. The airport is blocked, planes can neither take off nor land. Fierce fighting is taking place in the city center: the president’s residence was attacked by rebels, while government troops fired helicopters and tanks from the residence of the vice president. Residents of the capital flee for thousands to a refugee camp opened by the UN. The total number of victims, according to some, has already exceeded three hundred people.

The same formations fighting 2013 and 2015 for a year were fighting each other in a civil war — the insurgents of Vice President Rijek Machar and the government troops of President Salva Kiir. Both leaders have already ordered their soldiers to cease fire, but the soldiers do not obey. Civilians hope that street fighting in the capital is caused by non-payment of wages to the military and will soon cease. Otherwise, South Sudan risks falling back into the abyss of a bloody civil war, from which it managed to get out only last year.
South Sudan is the youngest state in the world. It gained the independence of 9 on July 2011 of the year after almost 99% of its residents voted for separation from the state of Sudan. This was preceded by a bloody struggle between North and South Sudan between themselves, which began almost immediately after the liberation of the country from English control in 1956. In the north, the Arab majority ruled, pursuing a policy of Islamization of the whole country. In the south, the Arabs were opposed by black people who did not want to change Christianity and their traditional beliefs. The first civil war lasted from 1955-th to 1972 year and cost the country half a million dead. The South then managed to win the right to autonomy, and for the next ten years the country enjoyed truce and relative calm.

The second civil war, which began in the year 1983, went on year 22 and claimed more than two million lives. More than four million people became refugees. Potentially one of the richest countries in Africa, Sudan has slipped into poverty and lived in a state of perpetual humanitarian disaster.

Through the efforts of the world community, it was possible to slow down the incessant massacre. UN peacekeepers were introduced into the country. The diplomats of leading countries, primarily the United States and China, managed to convince the belligerents to conclude the Naivasha Peace Agreement in 2005. South Sudan has received even wider autonomy, as well as a respite of six years, during which, somehow, it managed to organize the work of the state machinery on its territory. But by 2011, it became clear to everyone that a divorce would not be avoided. European countries and the United States in every way welcomed the impending referendum on the independence of South Sudan and promised support for the new state. A referendum was held, South Sudan gained independence and was accepted into the UN.
It would seem that life is getting better. The new state has at its disposal a territory approximately equal to France, as well as 75% of all oil wells in Sudan. In addition to the proven and actively exploited hydrocarbon reserves, the new republic also had rich deposits of chromium, zinc, gold, silver and diamonds. However, two years have not passed since independence, as South Sudan again plunged into bloody intra-ethnic clashes, this time on its own territory. First of all, the largest tribes of South Sudan, Dinka and Nuer, fought against each other. It turned out that the president of the country, Salva Kiir, himself from Dinka, draws only his fellow tribesmen into power and into the army leadership. In December 2013, the president removed Vice-President Riek Machar, who belongs to Nuer, from power, accusing him of attempting a coup. The army split about in half: the Dinka remained loyal to the president, Nuer went for the vice-president. Following the army, the country also split - another civil war began.

However, to call this bloody mess war does not turn the language. The genocide of entire tribes (for example, the White Army Nuer promised to wipe the Murle tribe off the face of the earth in order to “ensure the safety of their livestock”), burning the villages together with their inhabitants, torture and massacres of civilians, cannibalism, rape and robbery - since December 2013-th to August 2015-th looked the daily life of a young state. The followers of Machar were called rebels, those who supported Salva Kiir were government troops, but both were showing indescribable cruelty. The result of their confrontation was more than fifty thousand dead, more than a million refugees and displaced persons, mass starvation and epidemics.

But this is not only a matter of inter-ethnic contradictions and tribalism typical of Africa. According to many analysts, the bloody история South Sudan caused by the conflict of large external players. The largest investor in the oil sector of large Sudan has long been China and its state-owned China National Petroleum Corporation. From 1999 to 2007, China has invested at least 15 billion dollars in the economy of Sudan. But oil fields are located mainly in the south, so China National Petroleum Corporation built pipelines from south to north, and for a long time Sudan was one of the largest foreign suppliers of oil to China.

Against this background, lobbyists of the idea of ​​a referendum on the independence of South Sudan became more active in the USA. According to American strategists, the acquisition of sovereignty by the South significantly weakened China’s position in Sudan, and indeed in Africa. Firstly, all Chinese investment contracts were concluded with the President of Sudan, and now most of the oil has left South Sudan. Secondly, the pipelines through which China pumped oil turned out to be in a neighboring country, which created the transit problem that we are familiar with in our relations with Ukraine.
The same goals - the chaos of the situation, problems with the extraction and supply of oil - served and civil war. It is no coincidence that the United States and European countries in this conflict clearly supported Vice President Machar, who prudently seized the oil fields, while the PRC supported the president Kiir in the hope that he would ensure at least some order in the country. Particular detail - in the UN Security Council, the American side has repeatedly blocked attempts to impose an embargo on supplies weapons warring parties.

Only in May, 2015, Kiir and Machar managed to negotiate a truce and sign an agreement to resolve the inter-ethnic conflict. The treaty was furnished with numerous reservations, was repeatedly violated by both parties, but a certain semblance of a fragile world did arise. President Kiir remained president, vice-president Machar - vice-president. In April of this year, Machar returned to Juba to fulfill his duties, and promised the country to get rid of the “vicious war”. Then the people meeting him released dozens of pigeons, symbols of peace, into the air.

Today there are street battles in Juba. Already killed about three hundred people. The fate of the pigeons is unknown.