The centenary of naval aviation of the Russian Navy

July 17 2016
45
July 17, 2016 marks exactly 100 years since the pilots of the Russian imperial air fleet gained an important victory in aerial combat over the Baltic Sea. Then the four Baltic Fleet seaplanes designed by Dmitry Grigorovich entered the battle with the four German planes and emerged victorious.


The most famous Russian aircraft of the First World War are the flying boats M-9 - heavy seaplanes, the main function of which was bombing attacks on ground positions and enemy ships. M-9 had a declared mass of about 1 t, and the mass of often operated aircraft was significantly higher than the mass of those that had just entered service. Such strangeness was explained by the fact that the wooden structures of the aircraft during operation were swollen from prolonged contact with water. This was due to the need for a systematic replacement of individual parts of the M-9, weighted with dampness.

The M-9 operated two types of engines - an experimental version with Renault (power 220 hp) and the standard version Salmson (power 150 hp). For all history up to 500 M-9 were built, which served not only as part of the imperial fleet, but in Soviet Russia and the USSR. M-5 and M-9 aircraft became the first fleet of the Russian marine aviationwho celebrates her birthday today. 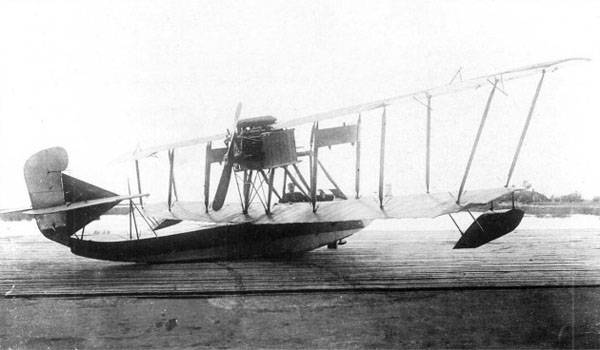 What is the naval aviation of Russia a hundred years after the appearance of the first aircraft with the possibility of taking off from the water and landing on it? Naval aviation is a native of the Russian Navy, whose goals include the following:

search and destruction of the combat forces of the enemy’s fleet, its amphibious detachments, convoys and single ships (ships) at sea and at bases;
cover groups of ships and naval objects from enemy strikes from the air;
destruction of airplanes, helicopters and cruise missiles;
conducting aerial reconnaissance;
targeting the enemy’s shipboard forces of their attack forces and issuing target designation to them.

Naval aviation is actively involved in the setting of minefields at sea, electronic warfare, landing and search and rescue operations.

Naval aviation has both aircraft and helicopters for various purposes. Each of the types is designed to solve certain tasks, including the mentioned tasks of countering the forces of the enemy’s fleet, laying mines and dropping marines to given areas of the terrain.

If we talk about the functional division of naval aviation, here there is a naval missile-carrying, anti-submarine, reconnaissance, fighter and auxiliary. There are naval aviation aircraft tankers, transport workers, aircraft for sanitary purposes.

The only aircraft carrier that ensures the deployment of deck aircraft is the Admiral Kuznetsov. On board is an aviation deck group consisting of Su-33 and MiG-29-Cub aircraft (plus other modifications) and Ka-27 or Ka-29 helicopters.

Out a statement the press service of the Ministry of Defense on the development of modern naval aviation in Russia:
At the present stage, the development of naval aviation is in the direction of improving all types of aircraft, increasing their speed, range and duration of flight, and equipping them with highly precise, controlled aircraft. weapons, widespread introduction of electronic computing equipment, control systems and methods, automation tools for collecting, processing information and issuing target designation to hit any targets with high accuracy, create search tools and hit surface and underwater targets on new physical principles, increasing their invisibility and combat stability .

One of the most important stages in the development of naval aviation is mastering the skills of operating aircraft of carrier-based aircraft with the help of ground test training complexes (NITKA). One of such complexes is located on the territory of the Crimean peninsula. The newest complex for training pilots of carrier-based aviation was built in Yeisk. At the end of last year, the Yeysk NITKA passed the first tests, in which pilots of MiG-29K aircraft took part. Test take-off video posted on YouTube on the channel Comment Moscow:

Retrofitting of the fleet of naval aviation is carried out on other fleets of the Russian Navy. In particular, the Su-30CM multifunctional fighters replenish the composition of the naval aviation of the Black Sea Fleet, forming a new squadron.

On the day of the 100 anniversary of naval aviation of Russia, the Military Review congratulates all those involved in this remarkable holiday and wishes the naval aviation of Russia further development with simultaneous updating and replenishment of the flight fleet and weapon systems to ensure the security of the Russian Federation.