July 16 2016
269
At the last NATO summit in Warsaw on 8-9 in July, the bloc members were going to discuss strengthening the eastern borders of the alliance, which include, inter alia, the geographical area under the provisional name Suwalki Corridor - a section of the Polish-Lithuanian border, approximately 65 km in length, stretching from Belarus to Kaliningrad. In the hypothetical scenarios of the military conflict between Russia and NATO, the alliance took the place of a kind of “West Berlin” to this corridor, that is, the most unprotected area in the event of an attack from the East, from Belarus.

For Russians, the question immediately arises why, according to experts of Brussels, the Russian Federation weapons to break through the land route to Kaliningrad, and even through the NATO countries, which will definitely lead to a major conflict? Of course, direct access to the exclave would not hurt, but not at the same price. At the moment, the Russian Federation enjoys the right of land transit to Kaliningrad, and can also deliver cargo by sea or by air through the Baltic, when such transit is difficult. Attacking Poland and Lithuania under normal conditions does not make sense to us.

Therefore, some unusual circumstances are implied. Which ones? Here we turn to the foreign press. For many years, long before the current aggravation of relations associated with Ukraine, she calls the Kaliningrad region a threat and stronghold of Russian militarism. Here it makes sense to recall that in similar formulations the February February 25 Control Council for Germany 1947 decided to liquidate the statehood of Prussia, part of which became part of the USSR. It is not difficult to guess what conclusions the public opinion of the NATO countries is pushing and what this means for us. 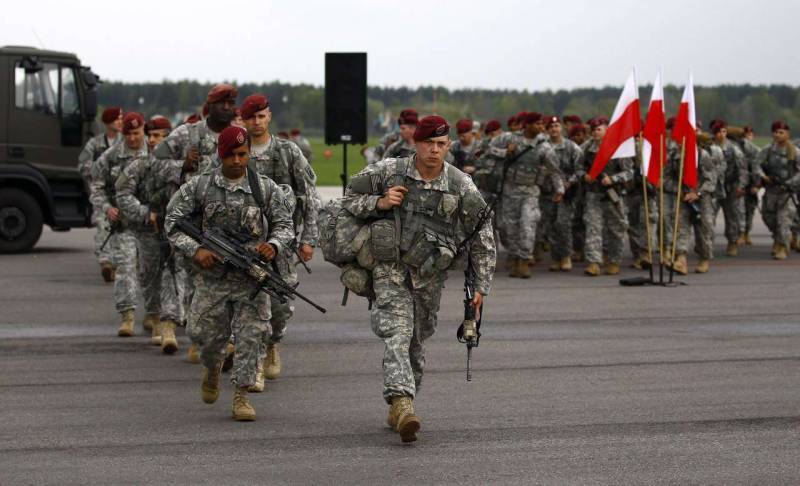 Kaliningrad and the Crimea, by virtue of their geographic location, allow Moscow to keep large areas of Europe under military control and, if necessary, to retaliate against them. Therefore, the ardent desire of the “partners” to deprive us of such important advantages is quite obvious. To deny from the Russian Federation the above-named regions is possible only by military means. If NATO takes advantage of a convenient situation and manages to seize Kaliningrad, then there will be no other options for Russia except to create the shortest land corridor with the goal of regaining its own territory. Just through the same Suwalki corridor. By the way, it is in Suwalki that, most likely, one of the American battalions will be deployed. In any case, Warsaw insists on such a configuration, and the Allies did not raise any particular objections.

It is clear that the Baltic countries will also be happy to take an active part in the land and sea part of the blockade of Kaliningrad. Lithuania has already restored the compulsory recruitment to the armed forces, which is understandable: there will be a lot of trained soldiers to curb the Russian offensive.

In the event of a critical aggravation of the situation, Russia will have to forget about the sea route in the Baltic Sea due to the fact that this transport artery will be controlled by a powerful fleet Germany. It became clear why Berlin put so much effort into creating an impressive naval force. Not to mention the existence of a fairly modern Danish fleet, despite the fact that Denmark is one of the most Russophobic EU countries.

Is the threat of such actions by NATO real? Obviously, yes. This scenario is supported not only by the warlike media background and regular NATO exercises in Poland, but also by the reaction of official Moscow. 20 June in Kaliningrad Svetlogorsk held a retreat meeting of the Security Council, after which the leadership of the country initiated a sudden sweep of the leadership of the Baltic Fleet. This also includes the urgent creation of an 11 Army Corps in the exclave in addition to the considerable forces that already exist. Hardly such a massive change is merely a precaution.

Not so long ago, the largest training exercises in many years were held in Poland, in which 31 was involved a thousand military, 3 thousands of ground equipment, 100 airplanes and helicopters, and 12 ships. The name of the teachings received very saying - "Anaconda".

In response, Russia conducted military exercises throughout the northwest, which continue to this day. Bye the ball is on our side. What will answer Brussels, we will know very soon.