Closed the door, but left a gap, or who would deceive? 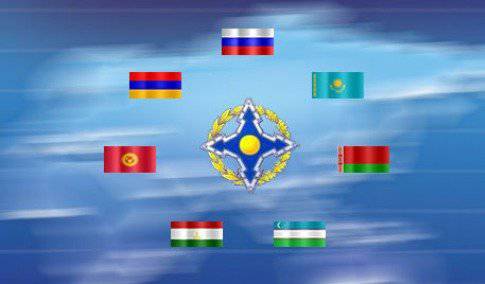 The summit of the CIS countries and the Collective Security Treaty Organization (CSTO), which was held recently in Moscow, made a crucially important decision - not to host the military bases of third countries without general consent. This refers primarily to the US base. In the domestic media, both news reports and detailed comments were devoted to this. Russia’s concern about the security of its borders in the south-east direction is quite understandable here. But after all, such a topic is far from being indifferent to the West, however, their press reacted to the decisions of the summit almost in any way, trying not to notice such a principled clause of the agreement. What is the matter?

“Americans are not at all eager to place military bases in Central Asia,” Anatoly Tsyganov, head of the Military Forecasting Center, told me shortly before the summit. “They now have the task of creating military centers and training camps in countries neighboring Afghanistan.” With a seemingly good goal - to ensure stability in the region and create normal conditions for the withdrawal of troops and equipment from Afghanistan to 2014 through the countries of this region, since Pakistan is blocking the transport corridor to the Americans through its country after many incidents of casualties as a result of “targeted” strikes in the fight against the Taliban in the territory of their own country.

So, perhaps, here lies the reason for the silence of the US press on an acute and significant problem. Otherwise, how can we explain the ignoring of the CSTO Treaty, adopted at the initiative of Moscow. It should be noted that by the end of the outgoing year, Russia realized that it might soon be in the ring of a tenacious American embrace: in addition to deploying missile defense in Europe, what they say and write very much, the US’s efforts to gain a foothold in Central Asia are clearly increasing. This is evidenced once again by the facts of the transfer of the latest models of military equipment to Dushanbe and Tashkent either at no cost or at a very low price. In the same series, and the desire to thoroughly stake out for military sites in Kyrgyzstan, Tajikistan and Uzbekistan. And suddenly it was decided to cancel these plans by the heads of the CSTO, having tightly closed the door to the presence of America. But it turns out, not everything is so simple. In the adopted document, there are loopholes that allow CSTO partners to bypass the ban. It is enough to rename the base, for example, to the center, and it will actually exist, without formally violating the resolution clause that expert A. Tsyganov told me. Naturally, the Americans are not at all interested in the public disclosure of such a “secret” and in the excess hype around the bases of the training camps.

However, it must be said that the CSTO decision itself is still a considerable breakthrough in the military-diplomatic sphere in recent years. The fact of adopting the document unanimously is already a victory for Moscow and its close allies. It is worth recalling that Uzbekistan always stood out with a special opinion within the organization, which did not even participate in the program of the Collective Rapid Reaction Force (CRRF). Inside the CSTO, this isolation of Tashkent does not please everyone. Not without reason, in early December, the President of Belarus, Alexander Lukashenko, even stated that it was time to consider the position of Uzbekistan in certain areas of cooperation and decide on its future membership in the CSTO. After such a statement, some experts argued that the Uzbek leader Islam Karimov would once again ignore the organization’s summit, as he had done the previous time.

But Karimov arrived in Moscow, signed the document and, moreover, publicly praised Russia's position in the matter of stabilizing the situation in the CIS countries and generally expressed the spirit that our country was and remains an attractive center for all former Soviet republics. Perhaps, the Uzbek leader after the “Arab spring” has become even more critical of the advances and promises of the soft-growing United States. As they say, the old friend is better than the new two. However, and weapon American and Tashkent centers categorically reject Tashkent.

As the president of the Academy of Geopolitical Problems, Colonel-General Leonid Ivashov, said, evaluating the new treaty: "In recent years, this is the only solution within the organization to conduct a coherent policy, and specifically military policy." At the same time, he noted that there is no clear definition of the concept “military base”; therefore, one or another country can now explain the appearance of a base by the fact that it is, for example, a dual-use facility or a transit point, a logistics center, etc.

In the same Uzbekistan, Navoi Airport is an international logistics center and serves 90% of Americans in Afghanistan. In Tajikistan, the most attractive object for Americans was the Aini airfield, to which Russia and India also have their own views. Therefore, Alexander Knyazev, a senior researcher at the Institute of Oriental Studies of the Russian Academy of Sciences, argues that the CSTO documents should clearly disclose what is meant by the term “military base”.

The Manas airbase, known to everyone outside Kyrgyzstan, has also been renamed the transit center. And one of the ports in Kazakhstan - Aktau - is called the logistic maritime center, around which, again, circles like the pike are held by diplomats and the US military, including Hillary Clinton. An anti-terrorism training center has been established in Kyrgyzstan in the city of Tokmak, where a large group of armed Americans is present and exercises are held. Didn’t the experts and leaders of the countries themselves headed by Russia, who prepared the document of the CSTO summit, know about all this?

Of course, they knew, but apparently decided that so far the problem of a closed door for the Americans cannot be completely solved. It turns out that they left a gap where the American boot goes completely. Who played up? Own self-love, which, they say, managed to unanimously make an important decision, the CSTO partners, and, perhaps, the same Americans, who do not give up hopes to involve Russia in their anti-Islamic policy. In other words - to carry hot chestnuts with the hands of Moscow in the big war that they incite in the Middle East, around Iran and further to the Chinese border.

December 23 “Nezavisimaya Gazeta” published a statement by three American Republicans - Jatras, Lozansky and Salvia under the heading “The next stage of the reset is the union with Russia”. It says that the Republican Party platform in 2012 should provide for easing tensions on Russia's western borders, including the missile defense problem and further NATO expansion to the East, by creating a joint US-Russian defense system against rogue states. “We need to catch up. It's time to act, ”with these words ends the statement. And the Americans want to act, as you know, against such outcasts like Syria and Iran. At the same time, it always means, albeit not called out loud, still gigantic China, for which all existing and future logistics centers and training camps, not indicated and not seen in the CSTO treaty, will be useful. This is not a base at all.