July 15 2016
335
During the celebration of Bastille Day in Nice, a terrorist act was committed. A truck driving along the Promenade des Anglais at speeds up to 70 km / h literally rammed the crowd. According to unconfirmed reports from eyewitnesses, people were shot at. According to preliminary data, the driver of the truck was a native of Tunisia. He was liquidated by the police. 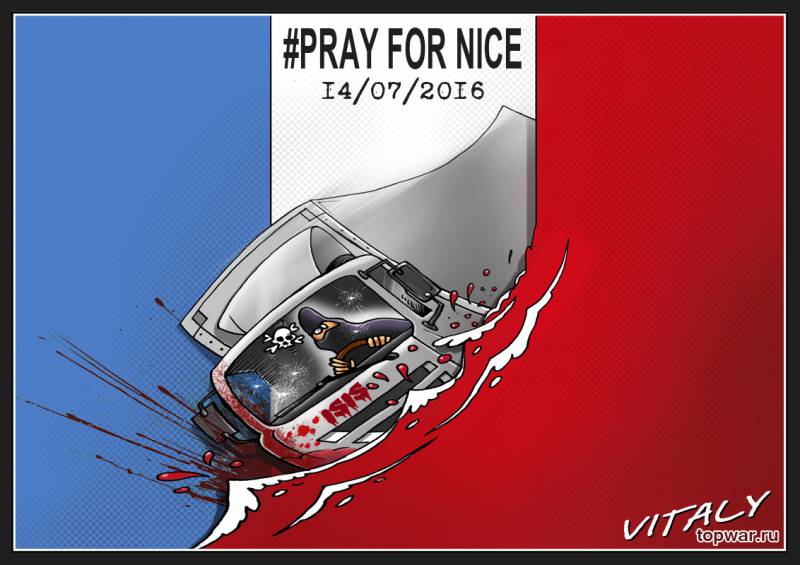 As the BFM.ru With reference to the Le Figaro report from the scene, in the evening of July 14 the truck driver drove his car directly to the crowd that had gathered on the English Embankment. People wanted to watch the fireworks on the occasion of the French national holiday - Bastille Day.

According to the information received, the driver was shot dead by the police. City officials have declared a terrorist act. In the back of a truck found weapon, rifles and grenades, said a source in the French edition.

TASS leads the message of the Prefecture of the Alpes Maritimes Department. According to him, no less than 80 people died in the bloody attack.

The mayor of Nice, Christian Estrozi, earlier called what happened “the most terrible tragedy in stories of our city. " “Everything indicates that the driver’s actions were deliberate. He also fired several shots into the crowd. Many weapons and grenades were found in the truck, ”the mayor told BFM TV.

A truck that crashed into a crowd on the embankment rammed people “for two kilometers,” the Alpes Maritimes department prosecutor's office said. Then, as noted by BFM TV, the terrorists opened fire, "there was also a shootout of people in a car with the police."

Now a truck with a broken front is on the Promenade des Anglais.

A special operation is currently underway. In the central square of Massena, near the embankment, the police created a closed area.

It is not known whether there was a terrorist alone, or had accomplices. It is also not clear whether he fired at the crowd, or whether the witnesses heard the police shots.

"Moscow Komsomol" notes that two Russians, a boy and a girl, turned off the Promenade des Anglais in just a few seconds before the truck.

Earlier, one of the eyewitnesses shared with the press: “He [the truck] drove onto the sidewalk right in front of us and began to deliberately crush people. The resulting panic simply cannot be described, people escaped where they could, at this 14 celebration of July there were many children, we saw a lot of people on the ground, including the dead, and used towels to make bandages for the wounded. ”

Reports of the shooting of automatic weapons and action movies in the plural were also received from eyewitnesses.

Nice terrorist attack is condemned throughout the world.

“Terrorism in all its forms and manifestations is one of the most serious threats to international peace and security,” the Security Council said.

In addition, Mr. Medvedev expressed his condolences to the victims and relatives of the victims.

“I would like to join the words of condolences to France, to all the victims, as well as to the relatives of those killed in connection with the monstrous terrorist attack in Nice,” Interfax the words of the Prime Minister of the Russian Federation, spoken by him at the plenary meeting of the ASEM Forum, which opened in the capital of Mongolia.

As Medvedev noted, terrorism “has no borders and is a common challenge for both Europe and Asia.”

“By now,” he said, “unfortunately 80 are dead, among them children, a large number of tourists. According to media reports, among the dead are citizens of the European Union and Russia. This is an extremely sad event. ”

Further, Medvedev called for the use of force against the militants and their “sponsors”: “We must look for common answers to such challenges together, show solidarity, and take every effort from us to fight terrorism. Moreover, the terrorists and their sponsors understand only force, and we must use it. ”

Received and a statement from overseas. Barack Obama is ready to provide France with the necessary assistance in the investigation of the attack. This is stated in the official statement of the White House, reports Gazeta.ru.

The US president suggested sending a team of specialists to Nice to establish the details of the terrorist act: “I will send my team to assist the French investigation and provide any assistance that will help investigate the circumstances of the attack, find and punish the perpetrators.”

According to the latest data received from the French Ministry of the Interior, as a result of the terrorist attack, 80 people died, and 18 victims are in critical condition.

A meeting of the Security and Defense Council is scheduled for today in Nice. It will be held in the narrow composition of the president Hollande.

Recall, a month and a half ago, in May, the coming terrorist attacks in France were predicted by the head of the French government, Monsieur Waltz. While visiting Israel, he said in an interview with BFM TV and I24 that the terrorist threat in the world "has never been greater", and this is particularly evident in relation to France. Waltz expressed confidence that France will become "the main target of terrorism" and even "the number one target for" Daesh. Also, the prime minister said for some reason that he “never” lies to compatriots: “I never lie to my compatriots on relevant issues of internal security, because I was the Minister of the Interior.”

In addition to Monsieur Waltz, the high risk of terrorist attacks in France was recently warned by the head of the internal security department, Patrick Calvar. His warning came true with almost 100% accuracy since he говорил about the risk of terrorist attacks using vehicles. According to him, the terrorists of the "Islamic State" will change the tactics of the attacks: "They will move to the stage of using mined cars and explosive devices."