July 21 2016
28
There are glorious battles for their victories, for example, the famous "Battle of the Ice" and the Battle of Kulikovo. There are battles “not glorious”, but rich in finds on the battlefield - this is, for example, the place of the battle at the Zolotaryov settlement near Penza. There are battles renowned for both the result and the fact that they were depicted by talented artists - this, of course, is the Battle of Grunwald 1410 of the year. There are many other battles, in one way or another glorified, and on their background, the battle of Visby is renowned in a very specific way. She is mentioned by everyone who writes about stories weapons and armor, but nobody is interested in either its result or its value. Only one single fact is interesting, namely that it was, and that those killed in it ... were buried! And all together in a mass grave, and in addition in all his equipment!

Armor from the grave at Visby. Gotland Museum. 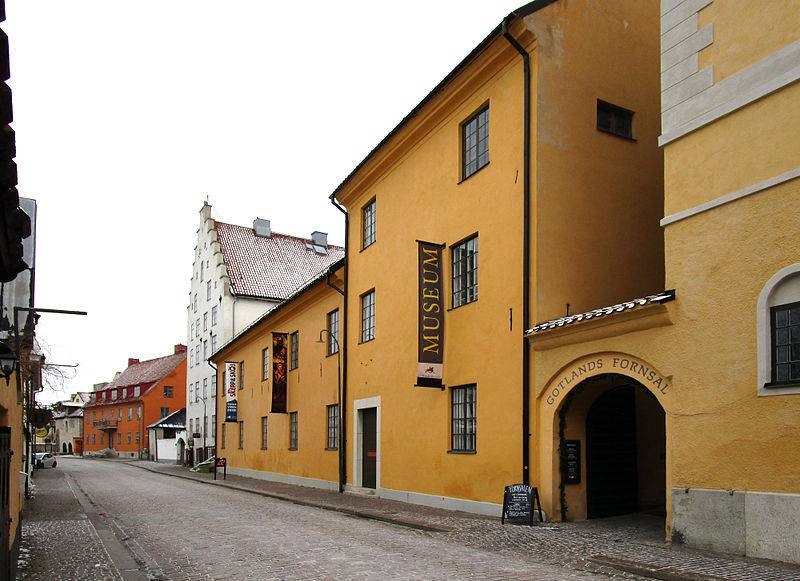 The building of the museum, where all this is exposed.

It is known that the Middle Ages was poor in iron. Iron armor and weapons were valued, they were not thrown onto the battlefield, but collected, if not for themselves, then for sale. And then buried in the ground "a treasure." Why? Well, we can only guess about this today, but we should tell more about the battle itself. 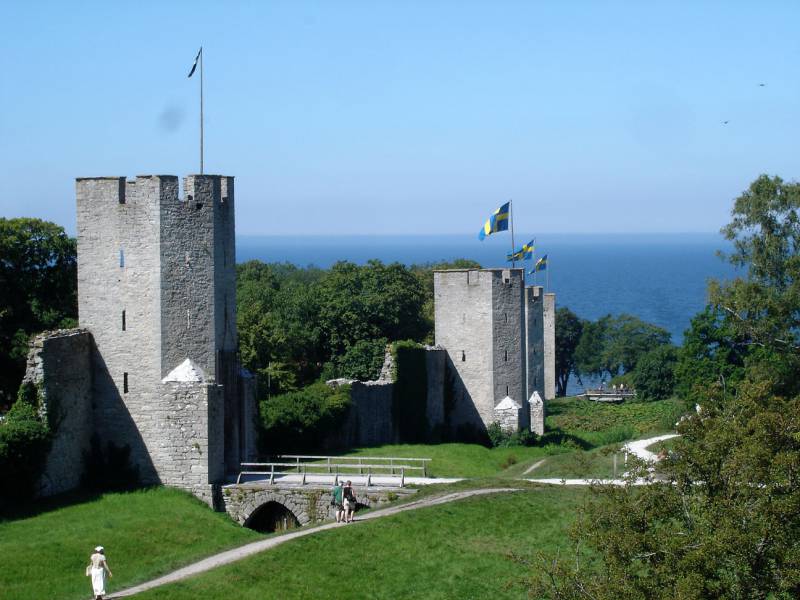 The gates of the city of Visby and the fortress wall. 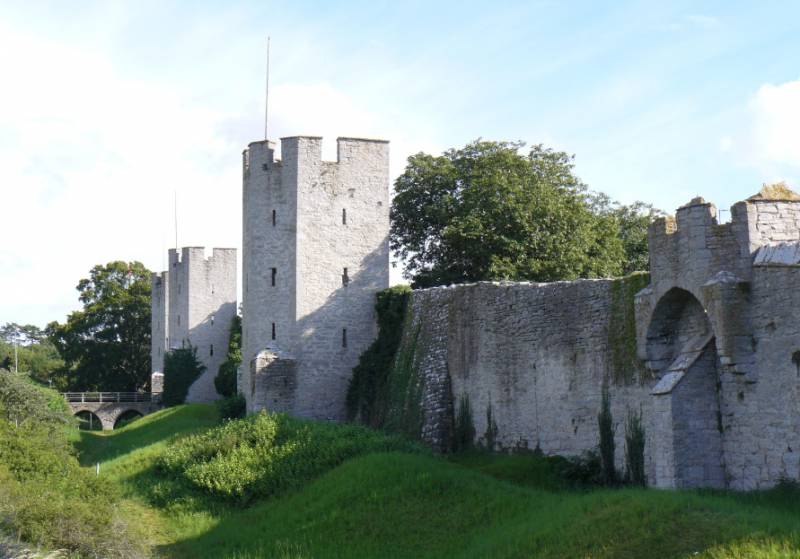 The same tower and gate from the opposite side.

It all started with the fact that July 22 1361, the Danish king Waldemar IV, moved his army to the west coast of the island of Gotland. The inhabitants of the island paid taxes to the Swedish king, but the population of the city of Visby was very multinational, and the Russians, Danes, and Germans, and all traded there, lived! From 1280, the city was a member of the famous Hanseatic League, which, however, led to the fact that the people of Visby were on their own, and the Gotland peasants served them and ... didn’t really like them. Well, people lived well and, according to the peasants, did nothing. But they ... The song is familiar, is not it? And it came to direct hostility between the townspeople and the villagers. And it came to the swords and, although the peasants called themselves to the aid of the Estonian knights, the townspeople beat them in 1288 year! And they began to live and live happily, but the local peasants had already laid their eyes on their wealth (now “peasants are peasants” - the movie “The Last Relic”), and now the king of Denmark. 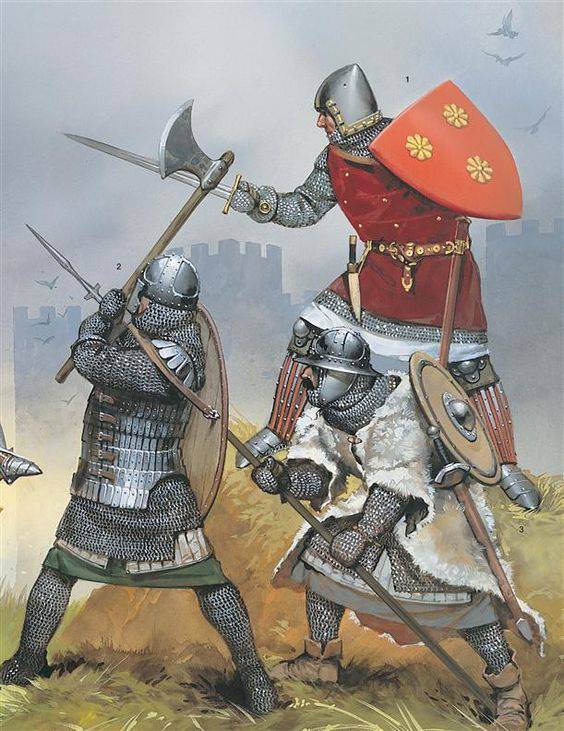 Battle of Visby. Figure by Angus McBride. Surprisingly, for some reason, he wrapped one of the soldiers in sheepskin, although ... it happens in July.

So that's where the Danish troops came from on the island and why they were moving towards Visby. Robbery at the time people lived! Some have, while others do not! So, we must go and take away !!! Here, however, local peasants got mixed up in the matter. It's one thing when you rob your rich, and quite another when you come to loot, and besides, even foreigners. On the very first day of the invasion, two clashes occurred between the Danish army and the peasants. The very next day, the peasants gathered from everywhere and attacked the Danes, but only the forces were unequal, and they killed from 800 to 1000 people of the local peasant militia. But ... brave peasants did not surrender, did not give up, and July 27 ... gave the aggressors a fight in 300 meters from the city wall! And then about 1800 people died in them, but how many Danes died is unknown. In any case, the dead were among them, but there were few of them. Archaeologists were able to find only a few items - for example, the purse and armor of a certain Dane from the family of Roord of Friesland. As noted above, the battle went on right at the very walls of the city, but ... the city militia didn’t work outside the wall and did not support "their" battles, and this cynicism was embarrassing to many 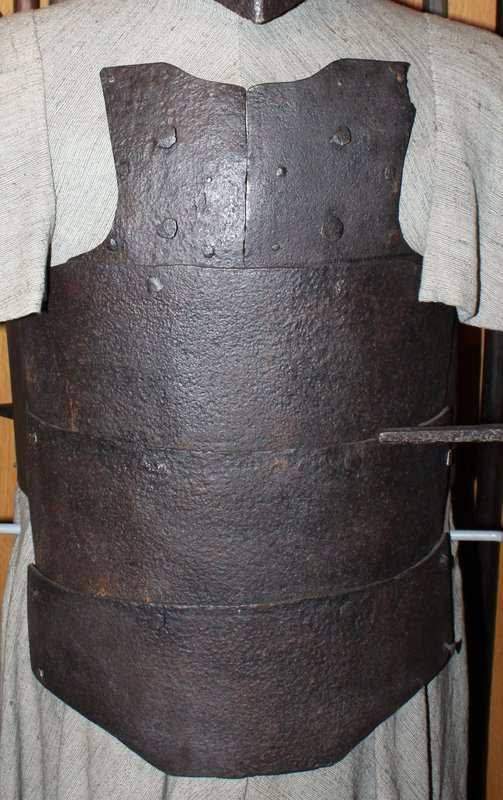 But the reason for such a relationship was, and she was serious. The fact is that the island’s peasants had another interesting “business” besides agriculture. They robbed the merchant ships crashing on the coastal cliffs, sailing to Visby, and the people who escaped from them were simply killed, having previously robbed them to the skin. This, by the way, explains the good armament that the "peasants" had, and which they could not have by definition. But if for many years you have been robbing merchant ships thrown ashore by a storm, then ... you will have both cloth, velvet, and a good sword, and chainmail, even if you are a threefold peasant.

Coat-of-Plates is a typical armor from the grave at Visby.

Interestingly, in the end, the Gotlands lost as many people in this battle as the French lost in the famous Battle of Poitiers in the 1356 year.

Then the fun began. Do you think that the inhabitants of the city were under siege? Not at all! Having watched from the walls and towers for the defeat of the hated peasants, they hurried to surrender to the king of Denmark and in order to save the city and their property from being plundered. It is believed that they gave the winners almost half of their wealth, and this “payout” itself became a truly legendary event, although it is not known for certain whether it really was or not, and even if it was, how it went. True, the Danes, though they took a tribute, but still several churches and monasteries looted. Then King Valdemar appointed several sheriffs to control the city of Visby, left them a detachment of soldiers, gave the citizens a security letter in which he confirmed their rights and liberties (!), And ... left the island. 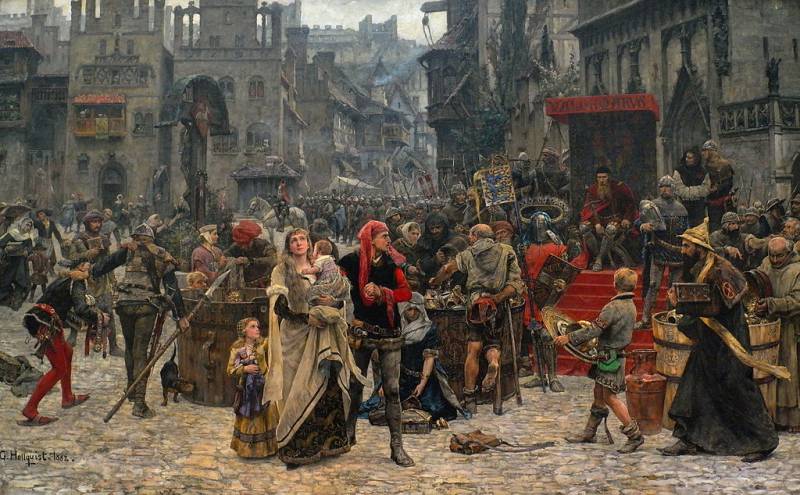 A year later (what was expected, unknown!), He added to his titulary also the title of King of Gotland. But then the king of Sweden, Albrecht, said that the island is part of his possessions, that his right is indestructible, and if Valdemar like himself allows himself, then let his swords speak. The island was so easily brought back under the control of Sweden that it was obvious that Denmark’s rule was not solid. And only in 1376, under Queen Margaret I, Gotland became officially owned by Denmark.

Another version of plate armor found in the grave at Visby.

King Albrecht became involved in the 1389 civil war of the year, in which Queen Margaret supported the "rebels" and forced him to abdicate. But ... the king is king, so he was given the island of Gotland with the "capital" of Visby, which at that time was captured by ... the most real robbers - the Vitali brothers, and ... they supported him and recognized his rights. Such a “touching friendship” between aristocrats and brigands happened in those times. They were knocked out of the island only in 1408. 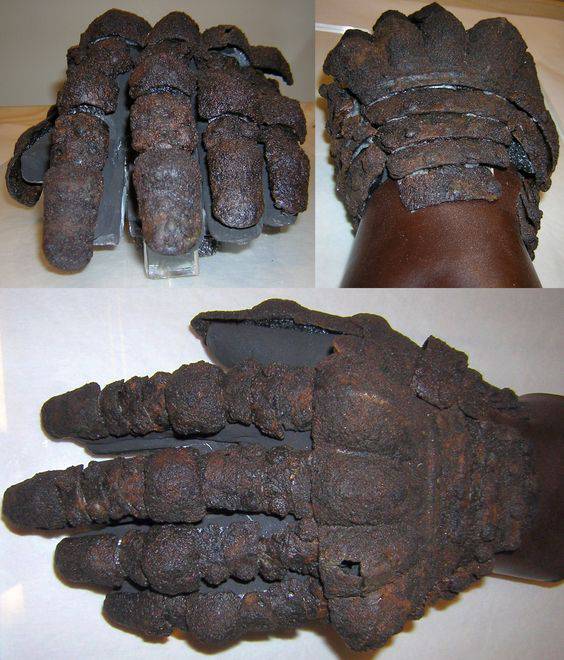 Well, now about the most important thing. And the main thing in this battle is that those who died in the battle were buried in common graves. And no one had ever removed any armor or clothes from the warriors. They were simply simply thrown into the pits and covered with earth from above. Why this happened - for sure nobody knows, but there are two versions that explain this oddity. 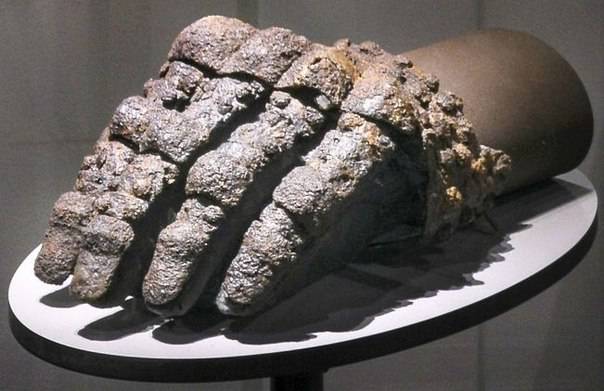 Historian John Keegan, for example, believes that the cause was the July heat and the fear of the plague, which, as it was then believed, could have come from “evil miasms” and a large number of corpses (approximately 2000 people were found!). This is the first reason.

The second could be the result of banal disgust: the Danes seized such prey that they were too lazy to mess with corpses swollen with heat, scrape the blood, the brains and dirt from the chopped armor, and that is why they hurried all the dead to bury. But from the very field they collected almost all the iron, so there is simply nothing on it. 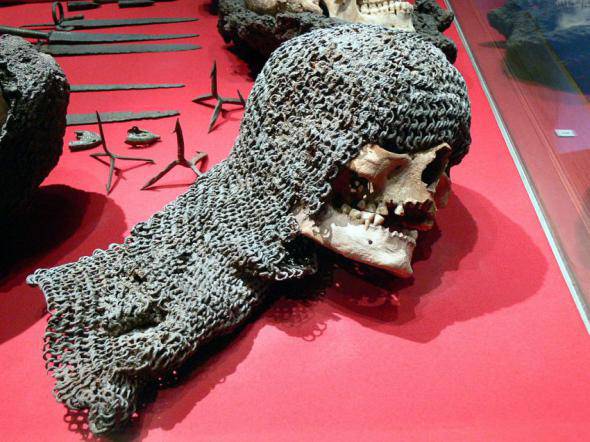 Anyway, and for archaeologists this unusual “necropolis” became a real gift. It was possible to find out very interesting things, which no chronicles then reported. For example, that a third of the island’s army consisted of ... minors and older people. That is, the weakest and most inept died, and the strong and skillful ... ran away!

The study of bone remains in five mass graves outside the walls of the city provided rich material for analyzing combat damage, but most importantly, archaeologists obtained many well-preserved specimens of military equipment. Found in the graves were chain mail, chain mail hoods, lamellar mittens of more than ten types (!) And even 25 pieces of quite well-preserved plate armor. Moreover, at least one of them was made from plates made in Russia, with which Visby traded and actively traded.

Very interesting are the injuries that the warriors who fell in the Battle of Vizby received. Judging by them, the actions of the soldiers in it were very organized, which speaks of their training and discipline. The Danes acted - it was the Danes, because their victims were buried, something like this: one Danish strikes the Gotland with his sword or ax, standing right in front of him. He raises his shield, repel the blow, but at the same time his left side opens and that’s where the other Dane struck his blow. That is, the Danish warriors fought in pairs, or were taught to stab there, “where it was revealed,” and not to wait for “who to whom”! 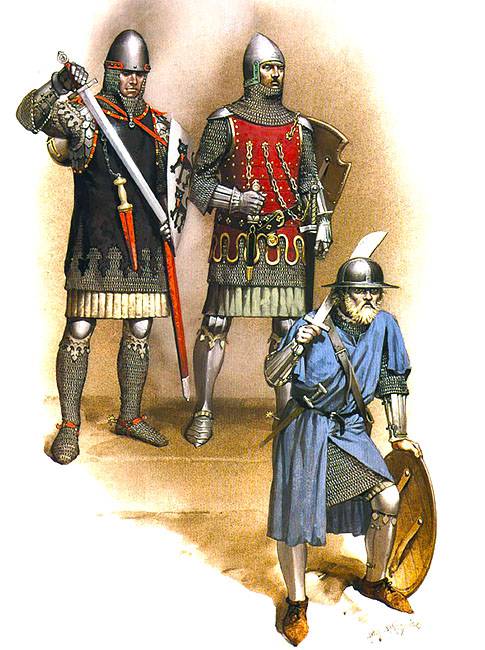 Perhaps it looked like the Danish warriors who entered the island of Gotland. Fig. Angus McBride

English historians have received full confirmation that the main type of armor at the time were coat-of-plates, that is, "jackets made of plates." It was clothes made of cloth or leather, on which plates were riveted on the inside, posing as rivet heads. Handguards were made on the same principle: metal bottom, cloth on top. But it is clear that between skin and metal was another thin glove made of leather or fabric. True, neither helmets nor shields of the grave at Visby have been preserved. Perhaps the helmets from the dead were still removed, but the shields ... went for firewood?

In any case, the battle of Visby is important precisely because it was there, and this “fraternal burial” remained after it.