Another victim of the Hague Judgment 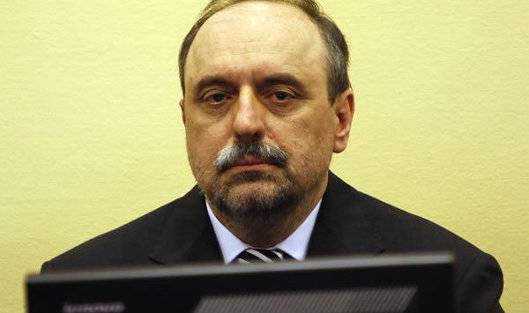 On July XNUM, another Serb died in the Serbian city of Novi Sad - Goran Hadzic, who was the defendant of the so-called International Tribunal for the Former Yugoslavia. He spent about five years in the same prison where Serbs Slavko Dokmanovic, Milan Kovacevic, Milan Babic, Slobodan Milosevic, Zdravko Tolimir, had previously died under rather vague circumstances.

Goran Hadzic, who led the Republic of Serbian Krajina from February 1992 of the year to January of 1994, was arrested in July of the year 2011. Under pressure from the West, like many other Serbian politicians, he was soon extradited to the Hague Judgment. In February, 2014 was diagnosed with an inoperable brain tumor, but after that he spent more than a year in prison. Finally, in April, the prisoner's 2015 was temporarily released for health reasons.

And on July 12, the news came that Hadzic died at the age of 57 in a hospital in Novi Sad. 14 July he is buried in the cemetery of the same city. The leader of the Serbian Radical Party Vojislav Seselj, who himself spent more than 12 years in the Hague prison, and another former prisoner of the same prison, associate of the President of S. Milosevic Nikola Shainovic, are among those who accompanied the politician on the last journey. Yes, only a few Serbs managed to get out alive from the dungeons of the "Western justice" after years of imprisonment.

The pro-European Prime Minister of Serbia, Alexander Vucic, stated that it was alleged that there was no one to blame for this death.

The Serbian Radical Party, headed by V. Šešel, speaks out quite differently. They believe that Hadzic was accused unfairly, his health was seriously undermined by the prison. Thus, he became another victim of the Hague Tribunal.

And indeed, if you look at the fact that many Serbs died in this “civilized” prison, while others - in particular, the same Seselj - are seriously injured in health, then the language does not turn to say that Hadzic died a natural death.

Now the Serbian General Ratko Mladic remains the last accused, for which he has not yet been sentenced. His health condition is also alarming. In June, the defense of Mladic appealed to the Hague Tribunal demanding to stop the process, but was refused. Judge Alphons Ori rejected the statement of the General’s defenders about the partiality of the court.

Recently, in mid-June, at the trial of the Mladic case, Russian Colonel Andrei Demurenko witnessed the defense. During the conflict in Bosnia, he was Chief of Staff of the UNPROFOR (United Nations Protection Force) in the Sarajevo sector. Demurenko’s testimony related to the Marcal 28 market of August 1995, which resulted in the death of a 43 person and injured 75 people. The West blamed the Bosnian Serbs for what happened - as if a mortar shell was fired from their positions. This tragedy was the reason for the external intervention of NATO forces in the conflict. However, Demurenko declared back then: the cause of the explosion was not a mortar mine, but an explosive device, controlled at a distance.

However, nobody then listened to the Russian colonel, nor now. Suddenly Demurenko left the Netherlands without completing his testimony. In fact, there have never been such cases when a witness interrupted his testimony, and one can only guess about the reasons for such a step.

As you know, Serbs are sentenced to huge prison terms, while the accused, representing other parties to the Yugoslav conflicts, either got off on ridiculous terms or were exempted from liability in general. So, the leader of the Bosnian Serbs, Radovan Karadzic, as we know, received 40 years in prison. And on June 30, the Hague Judgment rejected the appeal of two more Serbian defendants - the former Minister of the Interior of the Republic of Srpska, Micho Stanisic, and the police chief of the same Republic, Stoyan нинаupljanin. They were sentenced to 22 years of imprisonment, and the sentence remained unchanged.

True executioners of the peoples of Yugoslavia are in no hurry to answer for what they have done. Moreover, they continue to bathe in their dubious glory.

1 July, former US Secretary of State Madeleine Albright, who was one of the main initiators of the attack on the Federal Republic of Yugoslavia in 1999, was awarded the US Department of Defense "for outstanding civil service." US Secretary of Defense Ashton Carter stressed that among the merits of Madame Albright is “the preparation of a comprehensive American intervention” in the events in Yugoslavia.

The unjust war, in which thousands of people died under the NATO bombs, is still considered to be an “outstanding achievement” of its organizers in the States. At the same time, many Serbian politicians who tried, to the best of their ability, to protect their people, have either died or continue to suffer in prison.

Those who wiped out the Serbian Krajina were not responsible either. And now representatives of the Ukrainian Maidannaya junta often declare their desire to arrange the same bloody sweep in the Donbas. It is not surprising that Western politicians, continuing their anti-Russian rhetoric at every convenient occasion and even for no reason, have never condemned such bloodthirsty aspirations of their Ukrainian hangers-on.

Ctrl Enter
Noticed oshЫbku Highlight text and press. Ctrl + Enter
We are
Armored vehicles of Yugoslavia. Part of 6. Wars in the ruins. Bosnia and Herzegovina. Kosovo. Macedonia20 years after the war in Bosnia 1992-1995: rare photos of the conflict
Military Reviewin Yandex News
Military Reviewin Google News
18 comments
Information
Dear reader, to leave comments on the publication, you must sign in.