July, the Polish Sejm will make a decision that could have disastrous consequences for Ukraine 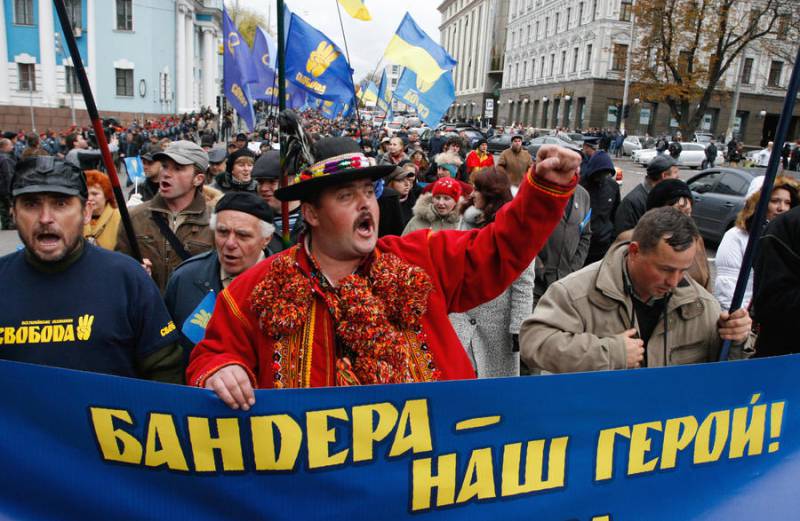 The scandalous renaming of Moskovsky Prospekt to Stepan Bandera Avenue was initiated by Kiev solely in order to once again relish spit in the direction of Russia. And we must clearly understand that the key word here is “Moscow”.

Spit something spat, but it turned out to be a fool: the Polish blogosphere literally exploded with indignation, and no one was shy in expressions.

“For me, the situation is clear: the Ukrainians are behaving like the last scoundrels,” indignant blogger Maksymilian Kopytko from Tarnów.

“Ukrainians are about the same friends as the Judas from the Apostle,” says Jacek Wianecki with irony.

“And then the Ukrainians are still surprised when they are portrayed as fascists,” writes Bogdan Stokowskival from Warsaw.

User Staszek urges Kiev authorities not to stop there, but to go even further. "Now it remains only to rename the Maidan in the area of ​​the SS Division" Galicia ", - he advises.

The short-term deputies of the Kiev City Council were so carried away by banal revenge that they did not even bother to take into account the seemingly obvious fact: they made their decision just on the eve of the 73 anniversary of the Volyn tragedy, the blame for which lies entirely on Hitler’s Hitlerites and other henchmen Germany.

Did not bother, did not calculate, did not consider ... And in vain.

The very next day after the renaming of the prospectus, the Polish Senate passed a resolution calling on the lower house of parliament to establish 11 in July as a day to commemorate the victims of the genocide committed by Ukrainian nationalists against citizens of the Second Republic of Poland.

As they say, it is written in pen - you can’t cut it out with an ax.

To say that in Kiev were scared means to say nothing. Vitali Klitschko promptly turned on the back and, as if nothing had happened, said: “If there are appeals, petitions from Kiev residents, then I do not rule out that the Kyiv City Council may reconsider this name.”

I would not be surprised if, on the basis of numerous requests from the working people, the prospectus is named after Marshal Pilsudski or, for example, Lech Kaczynski.

Now ukropatrioty will climb out of their way, just to somehow smooth out the shameful accusation of genocide. They will wriggle, humiliate and cry about the tragic fate of the Ukrainian nation, which has to bear the brunt of the fight against the Russian “aggressor”. Surely we will still see a pitiful sight, when the most terry nationalists rush to beg the Poles, so that they reconsider their decision or, at worst, soften the wording.

At the same time, they will tearfully ask their Western patrons to squeeze the ungrateful Polish brothers, so to speak, to find justice against them. Like, we are shedding blood here for all, and we are also mixed with mud for it.

The decision of the lower house of the Polish parliament will have disastrous consequences for the Kiev regime, both politically and economically.

We can confidently expect a kind of “parade of confessions” of genocide on the part of other countries, primarily Russia. In addition, some members of the Seimas propose to introduce criminal liability for the denial of the genocide committed by Ukrainian nationalists. It is difficult to imagine what kind of relationship will develop after all this between seemingly close allies.

Sadly, it sounds for Ukraine, but it should be ready for multibillion-dollar lawsuits for moral and material damage from victims of the genocide, as well as from their numerous relatives.

In any case, the infamous stigma on the forehead of the Kiev junta is already a medical fact that you cannot cover or cover up with anything. With such a stigma in the "civilized" family of European states, Ukraine will definitely not be taken. Is that through sincere repentance, as Germany did in its time. However, it will be another Ukraine.

I still do not lose faith in the fact that the criminal regime of Poroshenko and his whole team will be brought to trial for large-scale genocide of the population of Donbass.

Ctrl Enter
Noticed oshЫbku Highlight text and press. Ctrl + Enter
We are
What you didn't want to know about EnglandList of destroyed the largest and most high-tech enterprises
Military Reviewin Yandex News
Military Reviewin Google News
138 comments
Information
Dear reader, to leave comments on the publication, you must sign in.