The development of a promising ballistic missile has begun

July 15 2016
45
In the domestic media, the first reports appeared on the development of a new project of a promising ballistic missile. The details of this project are still unknown, but some speculations have been made. Attempts are being made to predict the purpose of the new project, as well as to determine its prospects in the context of the overall development of strategic nuclear forces. However, the vast majority of information about the new project is still unknown.

Information about the new project was published in the July edition of Izvestia 14. Journalists of the publication talked with the Director General of the State Rocket Center. V.P. Makeev Vladimir Degtyarem, who spoke about the current work of his organization. According to the head, the SRC is currently engaged in the development of several new projects as part of the fulfillment of orders of the Ministry of Defense. The development of land-based and sea-based ballistic missiles is underway. For strategic rocket forces based on land, an intercontinental rocket “Sarmat” is created. In addition, a development rocket is being conducted on another promising topic.

V. Degtyar did not disclose any details of the two new projects. Thus, to date, some information has become known about the “land” missile of the Sarmat type, while information about the complex being developed in parallel is not yet available. It is known only about the existence of this project, and there is also information about its possible purpose. 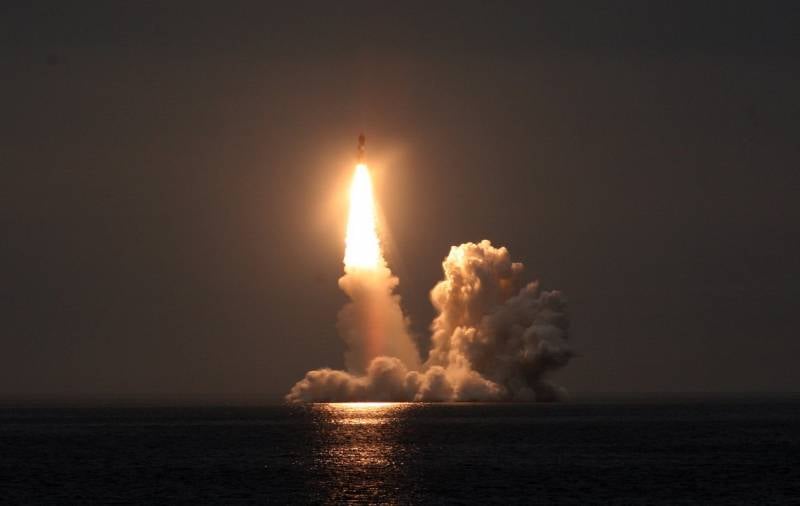 The launch of the Bulava rocket. Photo Bastion-karpenko.ru

From the words of the head of the SRC them. V.P. Makeeva said that at present the specialists of this organization are busy with the implementation of the early stages of the new project, during which the most common features of the future system are determined. It can also be concluded that the development of the project, the name of which is not yet known, is carried out as part of the development of the naval component of the strategic nuclear forces. Thus, in the distant future, a new ballistic missile could become the main armament of promising submarines. In this case, it can be considered a replacement for the recently adopted into service weapons rocket P-30 "Bulava".

On the characteristics and capabilities of a promising rocket, for obvious reasons, it is too early to speak. The project is at its earliest stages, because of which the first tests can begin only after a few years, and the adoption of a rocket for service is completely a matter of the distant future. Nevertheless, various assumptions regarding the appearance of a promising submarine missile may arise even now.

Probably, according to the main flight characteristics, the rocket of the future will, at least, not be inferior to modern products. It should be expected that it will be able to fly at a distance of at least 9-10 thousand km and deliver warheads to several targets. One should expect the use of a divided warhead with combat units of individual guidance. In this case, in the composition of the combat equipment can be applied some new developments. Thus, in recent years, the special interest of specialists and the general public has been attracted by developments in the field of hypersonic technology. According to various estimates, promising intercontinental missiles of domestic development will be able to carry special hypersonic maneuvering warheads or other systems based on new technologies. Expected and fully justified is the use of developed anti-missile defenses to help offset future progress in remedies.

In the context of the creation of a new missile for submarines, it is impossible not to consider the question of creating carriers of such weapons. The newest strategic missile submarine cruisers of the 955 "Borey" project are equipped with P-30 ballistic missiles. Submarines of this type and missiles for them were adopted relatively recently. By the end of the decade, it is planned to build eight submarines that can carry 16 missiles. Operation Boreev will continue for the next few decades. The possibility of upgrading these submarines with new missiles in the future has not yet been announced.

There is reason to believe that the promising rocket will become the main weapons submarines of a new type. Since 2014 in the news the development of a promising nuclear submarine project is regularly mentioned, which is planned to be brought to the stage of construction of serial equipment by the end of the next decade. According to available data, work is currently underway to form the general appearance of a promising fifth-generation submarine, which will have to join fleet in the long run. It is mentioned that the new project received the Husky code.

In April, 2016, curious information about the Husky project was announced by the head of the United Shipbuilding Corporation Alexey Rakhmanov. Among other things, there is a proposal to create unified submarine projects. Thus, on the basis of a single platform, it will be possible to build both multi-purpose submarines and strategic missile carriers. The unification of key elements of the structure with differences in armament will provide the best price offer for the Ministry of Defense.

The exact timing of the Husky project has not yet been determined, but different assessments are being made. Thus, according to A. Rakhmanov, by the 2017-18 years, the USC plans to complete the development of projects of fourth-generation nuclear submarines. If at the same time to begin designing the fifth generation submarine, the lead ship can be built by the end of the twenties. Accordingly, delaying the start of the project will lead to corresponding shifts in other terms.

According to previous reports, the fifth generation submarine project is currently at the stage of forming a general look and conceptual design. Works on the Husky theme are conducted at the Malakhit SPMBM (St. Petersburg). All available data on the project were obtained thanks to the statements of industry representatives. Other information has not yet been officially published.

The prospective nuclear submarine of the “Husky” project is currently viewed as a carrier of various weapons, including those that imply its assignment to various classes. The possibility of using such boats as a multi-purpose or strategic. Thus, the Huskies may well become the carrier of a promising ballistic missile, the development of which recently launched in the GRTs them. V.P. Makeev. Alternative to ballistic missiles in a multi-purpose submarine configuration can be anti-ship and anti-submarine missile or torpedo complexes of existing or prospective types. Earlier it was reported that the Husky will become the carrier of a hypersonic anti-ship rocket Zircon.

Full operation of the newest submarines of the 955 "Borey" project, carrying the Bulava R-30 missile, launched relatively recently. Three submarines have now been accepted into the Navy and are ready to carry out their combat missions. In the foreseeable future, the fleet will receive five more strategic submarines of this type, which are being built according to the updated 955A project, which is distinguished by some improvements.

It is expected that the operation of "Boreev" will continue over the next few decades. According to recent reports, no earlier than the end of the next decade, the Russian Navy will be able to receive new Husky submarines, the development of which began only recently. For some time, obviously, they will be operated in parallel with the existing "Boreas", after which they will get a chance to assume the main role in the composition of the naval component of the strategic nuclear forces.

Similar processes will occur only in 15-20 years, but should be prepared for them now. According to recent reports, preliminary work is underway on promising nuclear submarines and on submarine ballistic missiles. Their results will be clear only in a few years, however, it is already clear that such projects are of particular importance for the country's security.