July 17 2016
113
To explain the completely illogical actions of Ukrainian officials in organizing the production of ammunition can only be a significant personal interest, and not concern for the interests of the state. 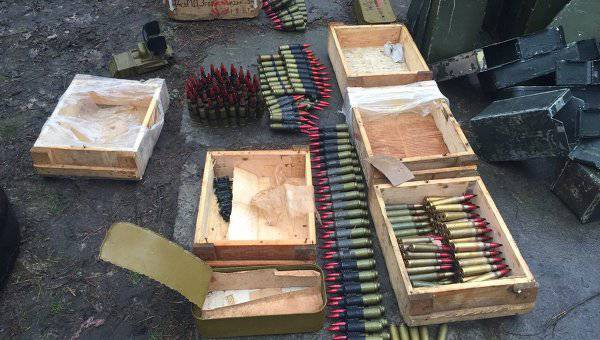 A recent interview with Roman Romanov, Director General of the State Concern "Ukroboronprom", once again reminded of the unresolved problem two years ago. According to him, the State Concern "is ready to begin construction of a plant for the manufacture of ammunition and is awaiting funds from the state budget."

As you know, in the spring of 2014, the new Kiev authorities faced the loss of the Lugansk Patron SE, the PO Lugansk Machine Tool Plant, the State Treasury Chemical Association named after GI Petrovsky (Krasny Luch, Petrovskoye), and the Rubezhansky Chemical State Enterprise Zarya Plant (Rubezhnoye), State Enterprise Yuzhny Chemical Plant (Rubezhnoye), which produced rifle and artillery ammunition, industrial and military explosives, and military operations that unfolded from the beginning of the same year led to an accelerated consumption of available Ukrainian security forces stocks of Soviet times.In the territory of certain regions of Donetsk and Lugansk region there were also SE "Makeevsky State Design Institute", developing project documentation for the creation of production of military and general purpose and the Donetsk factory of JSC "Tochmash", which once fired shots for tank and field artillery. Therefore, the military-political leadership of the country set the task of organizing the production of modern models of small arms weapons and ammunition on the territory of Ukraine in 2014 year. So, October 5 2014 Advisor to the Minister of Defense of Ukraine Alexander Danilyuk reported that production will be laid in the near future, which will allow "not just one caliber, but virtually the entire line of ammunition for the Armed Forces of Ukraine." He also said that in the near future the military plants of Ukraine will open their own production of "small-arms cartridges with a carbide tungsten core, which today have no analogues in the world, capable of piercing all known domestic and foreign body armor, and also easily pierce armored cars" Cougar "and even armored personnel carriers."

In October, the same Romanov told 2014 that today there is enough ammunition in Ukraine, but due to the conduct of hostilities this resource will be exhausted. At the same time, Romanov stressed that such a plant could be built within two years with the involvement of foreign investors: "At least, we are negotiating with some companies about the creation of an ammunition manufacturing enterprise." In particular, the head of the concern spoke about the negotiation process with the American company ATK, which provides 80% of the US Army’s need for ammunition. In addition, he spoke about the visit a few weeks ago to the Ukrainian delegation to Azerbaijan, where a modern plant for the production of ammunition is being built. "A meeting was also held there with the company that helps Azerbaijan deliver this production," said Romanov. He assured that under this task Ukroboronprom was able to gather collectives of enterprises from the occupied territories of Donbass: “We accumulate all the human and intellectual potential there, now these people are included in the process, and these people are working on reproducing, or rather , on the creation of a completely new modern enterprise for the production of shells and cartridges. " It was indicated that the enterprises in Shostka and Pavlograd were able to very quickly restore the production of ammunition.

In September, 2015 about the perspective of joint production with western partners was told by Deputy Director of the Ukroboronprom concern Sergey Pinkas: "... we are preparing to implement an investment project for the construction of a new ammunition plant, there will already be diversification - both Soviet and NATO cartridges. We have there is already an investment offer on such a plant worth several million euros. " He clarified that "the investor is not related to the production of cartridges, but rather is related to money. This is a good Western investor. I can’t say more in detail yet." He also said that “The most understandable implementation is a joint venture in which Ukroboronprom will act as a party. We could offer our capacities — say, a plant that uses its capacities not on 100%. But there is a discrepancy connected with the Ukrainian legislation. The state enterprise cannot create a joint venture, only a corporate one. But, according to our laws, there must be at least 50% + 1 shares in the Ukrainian company. The investor is not interested because he contributes his money and becomes a minority shareholder. " Our and Polish lawyers are currently working on solving these problems in search of a platform to create a joint venture. Either through a resolution of the Cabinet of Ministers or through amendments to the law that will allow creating such enterprises in Ukraine, in our facilities. Speech on any nomenclature which should be used for the needs of the ATO, defense order or other military topics. " In passing, Pinkas said that "the Poles have the opportunity to attract several million euros under 3% per annum as part of the government program. But here they already have a requirement - 50% + 1 share for themselves."

14 October 2015, the then Prime Minister of Ukraine Arseniy Yatsenyuk, during a meeting with the leadership of the Main Directorate of the National Guard of Ukraine, assured that “next year a line of small arms ammunition will be opened”, stressing that several projects have already been developed to put the line of production of ammunition, and "their price - from 20 to 200 millions." On the issue of the possibility of manufacturing other ammunition, including missile and artillery, Yatsenyuk promised to hold separate consultations with the leadership of Ukroboronprom, the Minister of Defense of Ukraine Stepan Poltorak and the Minister of Internal Affairs of Ukraine Arseny Avakov.

In December last year, Romanov, during a press conference following the work of the concern in 2015, reiterated the concern’s plans in 2016 to launch the production of ammunition of various calibers for small arms and to place production of an assembly of explosives for missiles and ammunition at the facilities of the Kiev plant "Artem". At the same time, the head of Ukroboronprom announced that a new enterprise “in Central Ukraine” would also be built, and its capacity would be enough to support the army.

14 June 2016 NSDC Secretary Alexander Turchinov during a visit to the state joint-stock holding company Artyom stated that in recent years, "including two years of warfare," military reserves inherited from the Soviet army were used to protect Ukraine. . According to the head of the National Security and Defense Council, to protect the country and strengthen its defense capability, there is no other alternative than to "create its own base for the production of a wide range of ammunition - from ammunition to large-caliber projectiles," since "these (Soviet) reserves are not limitless, much of it was thoughtlessly disposed of or sold at a time when no one thought it was necessary to fight. " In this regard, "new production facilities, new jobs will be restored or created, new technologies will be implemented", for which "about 800 Ukrainian enterprises of various profiles can be attracted: these are chemical production, mechanical engineering, and many other related enterprises and structures ", adding that" there is a need to develop and implement a state program for the production of Ukrainian ammunition, which should be implemented very rapidly. "

16 of June this year, the press service of the Ministry of Defense of Ukraine issued a statement by the Minister of Defense of the General of the Army of Ukraine Stepan Poltorak that Ukraine has enough ammunition to respond to existing threats: "In addition, we are working on promising developments of not only ammunition, but also weapons , equipment, personnel equipment. I note that the number of weapons and military equipment that we have allows us to carry out the tasks assigned to the Armed Forces of Ukraine in full. "

Thus, over the past two years, statements by representatives of the Ukrainian military and political leadership about the need for the production of ammunition come into conflict, above all, with their own assurances about the close observance by the Ukrainian side of the Minsk agreements.
First, if the first cease-fire clause has already been fulfilled for a year and a half, then the ammunition consumption should be zero.

Secondly, the views of the leadership of the Ministry of Defense, which manages and uses these same ammunition, that is, the real picture of their provision and the military-industrial complex, which advocate the speedy deployment of new facilities, which inevitably entails new budget investments diverge.

Third, in parallel, the disposal of existing ammunition and, accordingly, requests for financing this process from Western partners, as well as in the state budget, continue.

By April 2016, the Ministry of Defense of Ukraine prepared the terms of reference and requirements for a promising defense enterprise. Only the French company Manurhin (MNR Group SA) and several lesser-known firms were allowed to participate in the competition. According to a message from volunteers and activists, Ukraine proposed a cartridge factory project, the estimated cost of which was about $ 80 million, while Fritz Werner and Waterbury Farrel built similar enterprises for $ 60 million.

Even more interesting, the official Ukrainian state intermediary for the planned transaction, Spetstechnoexport, only in 2013 delivered equipment, documentation and consumables for the production of ammunition of 12,7 XX108 mm to the Ministry of Defense of the Republic of Equatorial Guinea, while rescuing only a few million dollars.

Another special exporter, Ukrinmash, sold the 2008 caliber ammunition assembly kit of 9X18 mm caliber with the retrofit kit for 9x19 mm caliber - automatic rotor lines M-LGG-56, M-LKG-XNCHNMX-MNGX56 - to the Ministry of Defense Industry of the Azerbaijan Republic in June LSP-56 for 2,17 million dollars, and a set of technical documentation cost the buyer in 270 thousand dollars.