"Caliphate" is not the same

July 15 2016
37
In the American press leaked information about the imminent departure in the deaf underground militants "IG". The builders of the “caliphate” from the “Islamic State” are preparing for defeat on the open battlefield. Bearded men admit that in half a year they lost a quarter of the previously occupied territories. The field commanders are dying, and the survivors are inclined not to military confrontation, but to terrorist tactics. 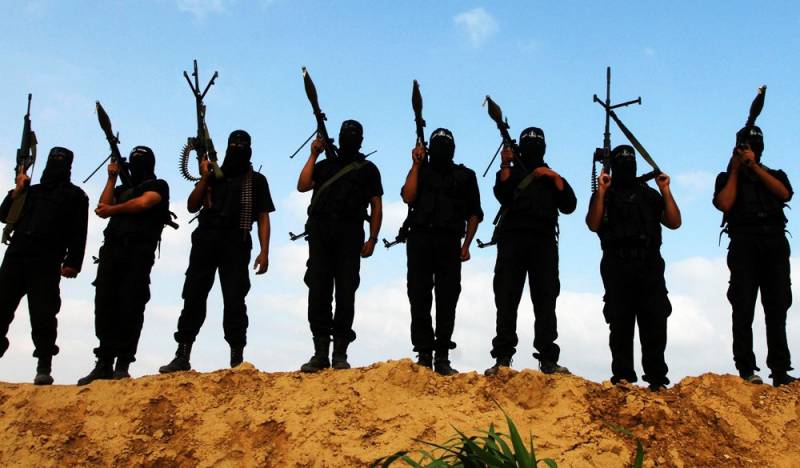 About the new strategic ideas of the "defeatists" from "IG" told the world the newspaper Washington Post.

Yes, the IG launches terrorist attacks around the globe, and yet the militants are already preparing themselves and preparing their followers for a possible “caliphate collapse”, which “was proclaimed with great fanfare two years ago,” the newspaper notes.

The group commanders publicly admit (especially recently in Syria) that they are losing on the battlefield. And even fear that their fortifications may fall before the onslaught of the enemy.

On the other hand, the terrorists do not intend to surrender. They promise to “continue the struggle” even if the opposing armies “drive” them into the “underground”.

US counterterrorism experts believe that the terrorist attacks in Istanbul and Baghdad with a large number of victims were largely a response to military actions against ISIS in Iraq and Syria. Such terrorist attacks are likely to continue and spread. At least, this will be the case at the initial stage, analysts say, since the network structure of the grouping allows it to carry out just such a strategy and tactics, moreover, “on at least three continents”.

Indeed, if the loss of territory constitutes a serious blow to the Islamic State — severely limiting, for example, the ability of terrorists to raise money, train recruits or plan complex operations, then the decentralized nature of the group’s activities ensures that the threat “for some time” remains. So say some officials from the United States, as well as former employees of various American structures. For example, Michael Hayden, a retired Air Force general who led the CIA from 2006 to 2009, said that at one time, Al-Qaida was a hierarchical and somewhat controlled organization, but “these guys” are something else. Their power is “unpredictable,” and their “populism” is a success.

The Islamists themselves, or rather, their “officials”, in public speeches and in interviews broadcast on Internet radio services, argue that the “Caliphate” project is still viable, but military setbacks imply a change in strategy. They report that their other divisions, as well as capital and “mass media” are moved “to different countries”.

Every day, say the Islamists, people go to the "IG" who want to join the "caliphate." A certain militant himself told the Western media about this, asking not to be named. “But we tell them to stay in their countries and wait patiently for the time to do something there,” the terrorist noted.

All this sounds, of course, frightening. In the meantime, the situation in Syria and Iraq is clearly not in favor of IS, and it promises a defeat for the militants. "Signs of despair are growing inside the caliphate every week," notes the American newspaper. The territory of the “caliphate” has decreased by another 12 percent in the first six months of the year 2016 (according to expert data). In the Syrian enclave "IG" in one province, the activity of the so-called Internet cafes was discontinued. Also, the commanders themselves ordered the destruction of a television station and satellite dishes in another province. Thus, the group will soon be cut off from the outside world.

Over the past six weeks, Islamist “officials” have been receiving more and more open statements about the impending fall of the IG. "Warriors of Allah" are retreating everywhere, from Fallujah in central Iraq to the Syrian-Turkish border.

But just two years ago, jihadist leaders announced the beginning of a “glorious new era in the world stories”, Which will culminate in the establishment of the Islamic“ Caliphate ”.

Now even the “official representative” of the “Islamic state” named Abu Muhammad al-Adnani is preparing his followers for heavy losses.

Cole Bunzel, a doctoral candidate in the Middle East Studies Department at Princeton University, who knows Arabic, believes that terrorists are trying to remind people of the group’s long history, that their organization will continue, as it was in the old days.

Scientist and publicist Will McKents of the Brookings Institution claims that civilians were “relatively easy targets for terrorists” in the bloody attacks in Istanbul’s Istanbul airport and in Baghdad. These attacks were designed to “calm the followers” ​​of the “IS”: they say, the grouping of forces still has a lot. However, according to McKents, "successful attacks abroad show deep concern at home." For several years, the leaders of the organization boasted the invincibility of their army, and now even Adnani admits the losses on the battlefield, even if he tries to show them in the most favorable light.

The “Islamic State” is still operating, an anonymous gunman noted, who agreed to be interviewed. But some of the followers of the group express frustration associated with errors on the part of individual field commanders.

For their part, representatives of European intelligence are already worried that the new phase of the terrorist war is in full swing. One French employee anonymously told the publication that the militants intend to use a different tactic, “much more insidious,” in large cities.

Recall that at the beginning of this week, the troops of Bashar Assad continued to advance to the east of Syria, while the bearded militants continued to retreat to the northeast of Palmyra.

Syrian army help Russian pilots. Six Tu-22М3, departing from Russia, hit the positions of the terrorist group. According to a report by the Russian Defense Ministry on July 12, six Tu-22М3 long-range bombers delivered a concentrated strike with high-explosive fragmentation ammunition at IG facilities in the east of Palmyra. As a result of the operation was destroyed field camp militants, three ammunition depots and weapons, three tank, four infantry fighting vehicles, 8 vehicles with heavy machine guns and a large number of enemy manpower.

Bearded man is something to give up.

Observed and commented on Oleg Chuvakin
- especially for topwar.ru
Ctrl Enter
Noticed oshЫbku Highlight text and press. Ctrl + Enter
We are
Results of the week. "All power is in truth"What threatens the world and the Russian caliphate. Part of 2
Military Reviewin Yandex News
Military Reviewin Google News
37 comments
Information
Dear reader, to leave comments on the publication, you must sign in.